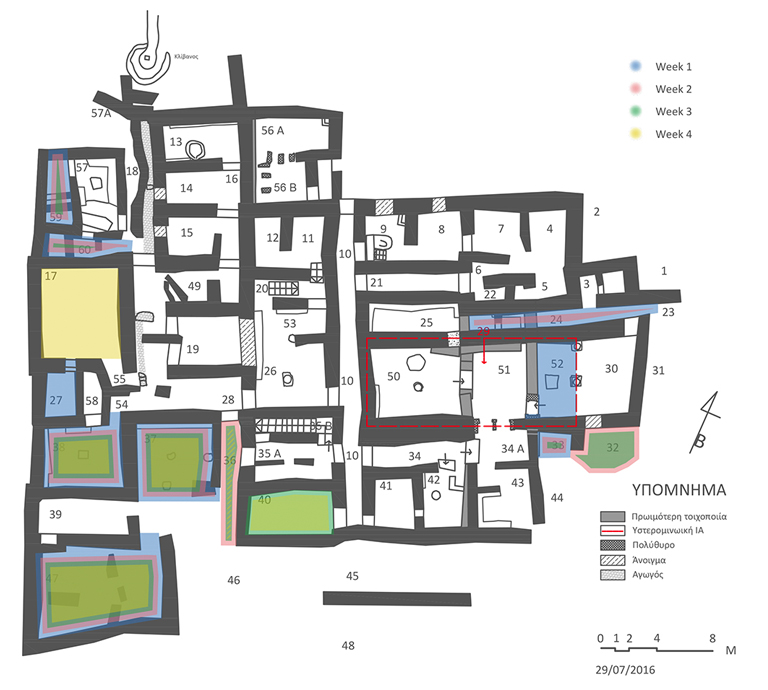 During the excavation, at the eastern part of the room, two layers of soil contained a lot of big-size of stones and some schists which belong to the east wall (fig.1). At the southeastern part of the room a large opening was found (fig.2). A small quantity of fineware and courseware pottery, animal bones, a miniature handless conical cup and large parts of pithos were collected (fig.3).

During the fourth week, the excavation in Room 37 continued with the removal of one more layer and the appearance of the paved floor at the central and south part (fig.1). Two more stone bases from pillars came to light at the East (fig.2) and South-West part (fig.3) of the room. The bench at the north part is extending along the north wall, below a fallen upper paved floor.

The excavation continued to the South-East, between the Room 37 and the Corridor 36, where after the removal of some fallen particularly big-sized slabs (fig.4), the paved floor appeared (fig.5). Some big-sized stones constitute probably the south boundary of this area (fig.6).

Several conical cups especially along the east wall of the Room 37 and on the surface of the paved floor-some of them in situ, small pieces of burnt wood and mortar, small groups of ceramic pots, a grinding stone, two clay loom weights and an object of excellent quality made of ivory (fig.7), were collected.

During the last week the excavation of Layer 6 was completed and subsequently a great portion of Layer 7 was removed (Fig. 1). Although no clear evidence of a pavement has yet come to light, this is the level of the floor of the already excavated Rooms 58 and 54 lying directly to the north and communicating through doorways with Room 38. A most interesting architectural feature unearthed in the centre of the room are the huge limestone blocks consisting the lower part of a pillar (Fig 1). In the area next to the central part of the west wall the sherds of the fallen storage jar (pithos) are continuing coming to light (Fig. 2). Among the rest of the finds and apart from the usual conical cups (among them two miniature versions of the type, Fig. 4), worth mentioning are the clay lid of a medium sized vessel (Fig. 3), two grinding stones, a stone weight (Fig. 3) and a lentoid sealstone (Fig. 4-5).

The excavation of Room 40 continued. Two layers of soil (Layer 5 and Layer 6) were removed revealing in the higher level medium-sized and big-sized stones fallen from the walls of the room and under these thin stone-plaques in sloping and vertical position which probably belonged to broken paved floor (Fig.1). At the NE area of the Room a thick gathering of stones was found and removed. Under this specific group of stones was revealed a bronze knife (Fig.2), a number of vessels, mainly cups and a small juglet, and three grinding-stones (Fig.3). Also several typical pottery sherds, animal bones, pieces of carbon, an iron-stone, a horn probably from deer and a piece of burnt wood on very good condition were collected.

In this week’s excavation came to light useful elements for architectural style and the importance of the Room 47.

Specifically after the appearance of a new wall the big space of room47 is separated into three smaller rooms. Room 47 A, Room 47 B and Room 47 C. These three independent rooms must have communication with openings which connect them. (Fig.2, Fig.3).

Furthermore, a small dagger sword which could be of a ritual use (Fig.1), came to light.