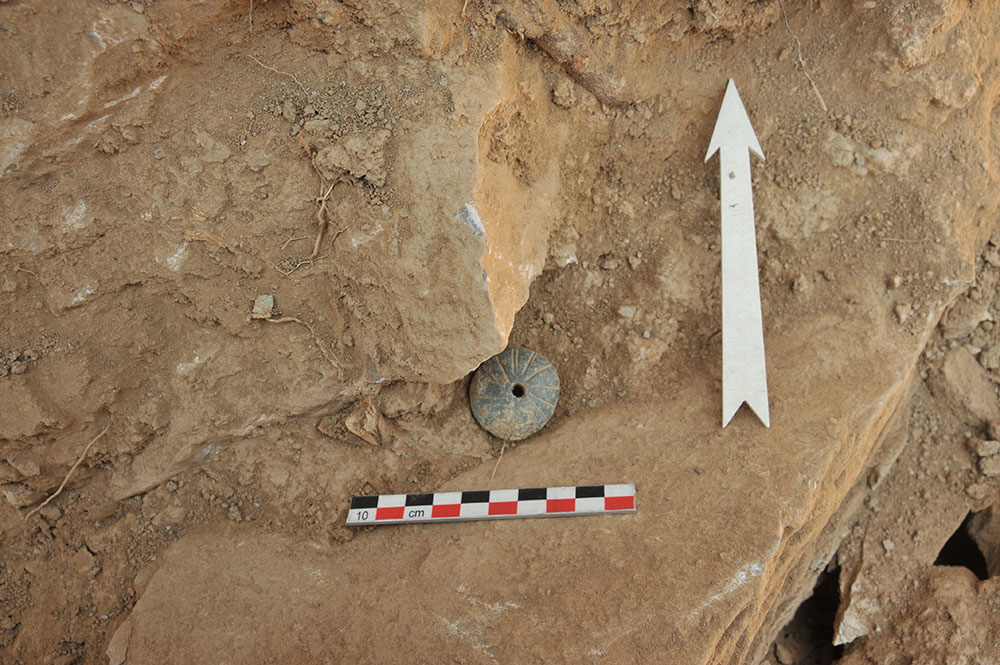 During the fifth and final week of excavation, the dig at room 17 of Zominthos’s Central Building was finished (fig.1).
A pillar was discovered at the centre of the room, while some slabs found at the south, north and eastern part of the room, indicate the existence of a paved floor. The two stone constructions, which were found during the excavation of 2006, were cleaned. A large quantity of fineware and courseware pottery was found (fig.2,3).

During the last week, in the Room 37 (fig.1), appeared the whole paved ground floor from big schist slabs and a second bench along the West Wall. A fourth stone base from column inside the SE wall’s foundation, came to light (fig.2). The excavation continued to the South, where the room was named Room 37A (fig.3). After the removal of the upper floor, appeared the paved ground floor from schists and limestone slabs. Finally, the excavation works continued to the South part of the Corridor 36 (fig.4), where the South Wall and the paved ground floor were found. Small pieces of burnt wood and mortar, small groups of ceramic pots and a grinding stone, were collected.

During the final week of excavation in Room 38 the removal of Layer 7 was completed, except for the eastern and southeastern part of the room (Fig. 1). In the southeastern part remain in place some slabs probably belong to the fallen floor of the upper storey (Fig. 2). In the eastern part a kind of humble, poorly preserved stone construction came to light in this area just to the east of the central pillar of the room (Fig. 1-2). The burnt layer and the construction are related to a pit furnace that has appeared in the northeastern part close to the east wall (Fig. 1-2). It is very probable that they indicate some kind of industrial activity, perhaps related to metallurgy. In the western part of the room the excavation of the broken storage jar (pithos) was completed (Fig. 3). In the central area, lying directly below the floor level of the final destruction of the room, was found an older type of conical cup (so-called “egg-cup”).

During the last week, continued the appearance of thin slabs in sloping and vertical position which probably belonged to broken paved floor. Under this layer which shows the destruction and the collapse of the upper floor is revealed a paved floor and benches in touch with N, S and W walls of the Room (Fig.1). A big and impressive number of finds came to light. Among the finds we should mention a bronze knife (Fig.2), a bronze needle (Fig.3), a rock crystal, pieces of a whole pithos (Fig.4) and many vessels, mainly conical cups. Also several typical pottery sherds, animal bones and grinding-stones were collected.

The last week came to light elements for architectural style and uses of the Room 47. It’s clear that Room 47 has two upper floors with the appearance of three different thresholds in three different levels (fig.1,2). The room was separated in three smaller rooms. The pottery of the rooms is luxurious with decorated vases and an important artifact which is decorated with rays. This artifact could be a kind of jewel like the head of a needle (fig.3).