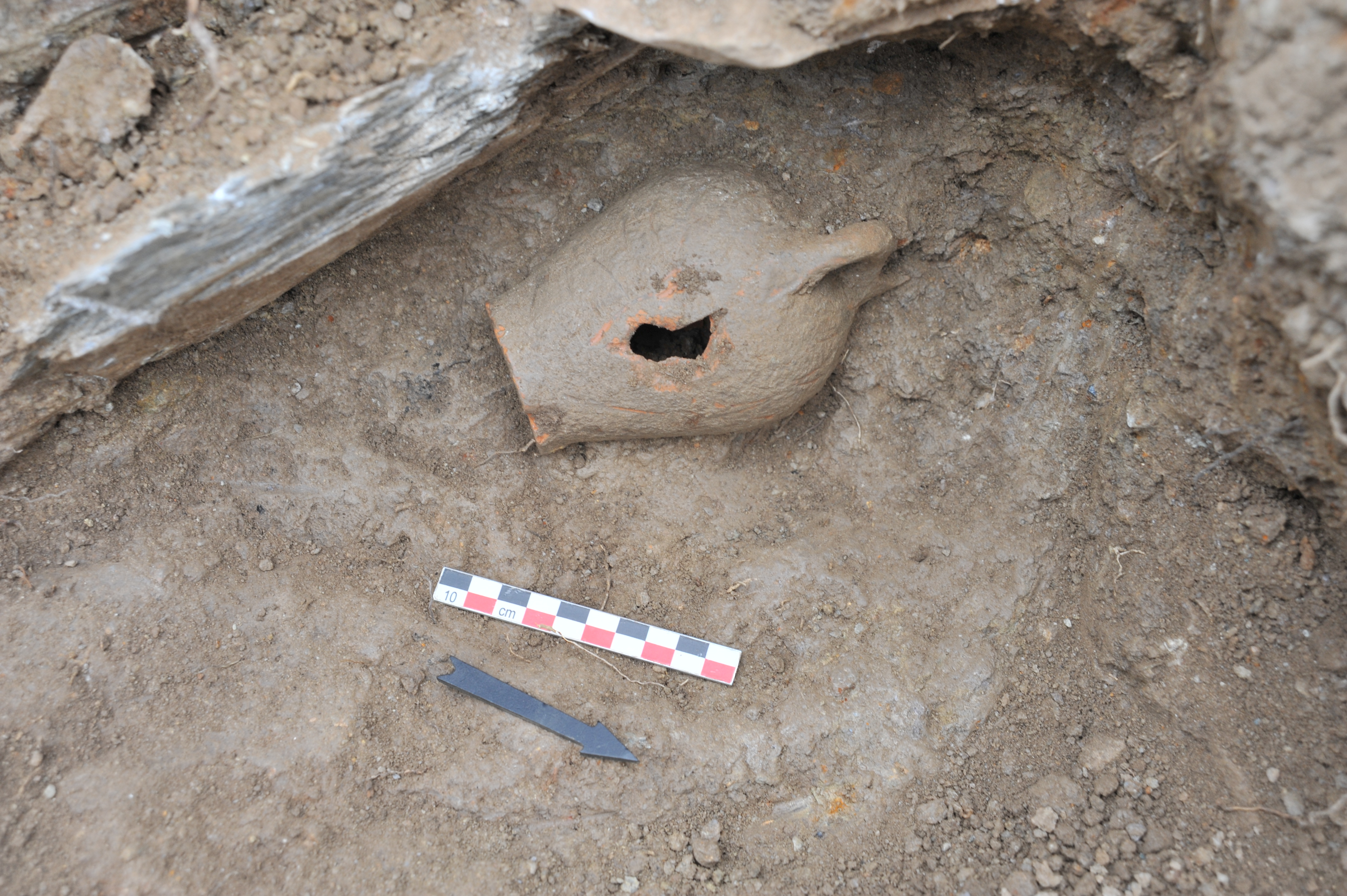 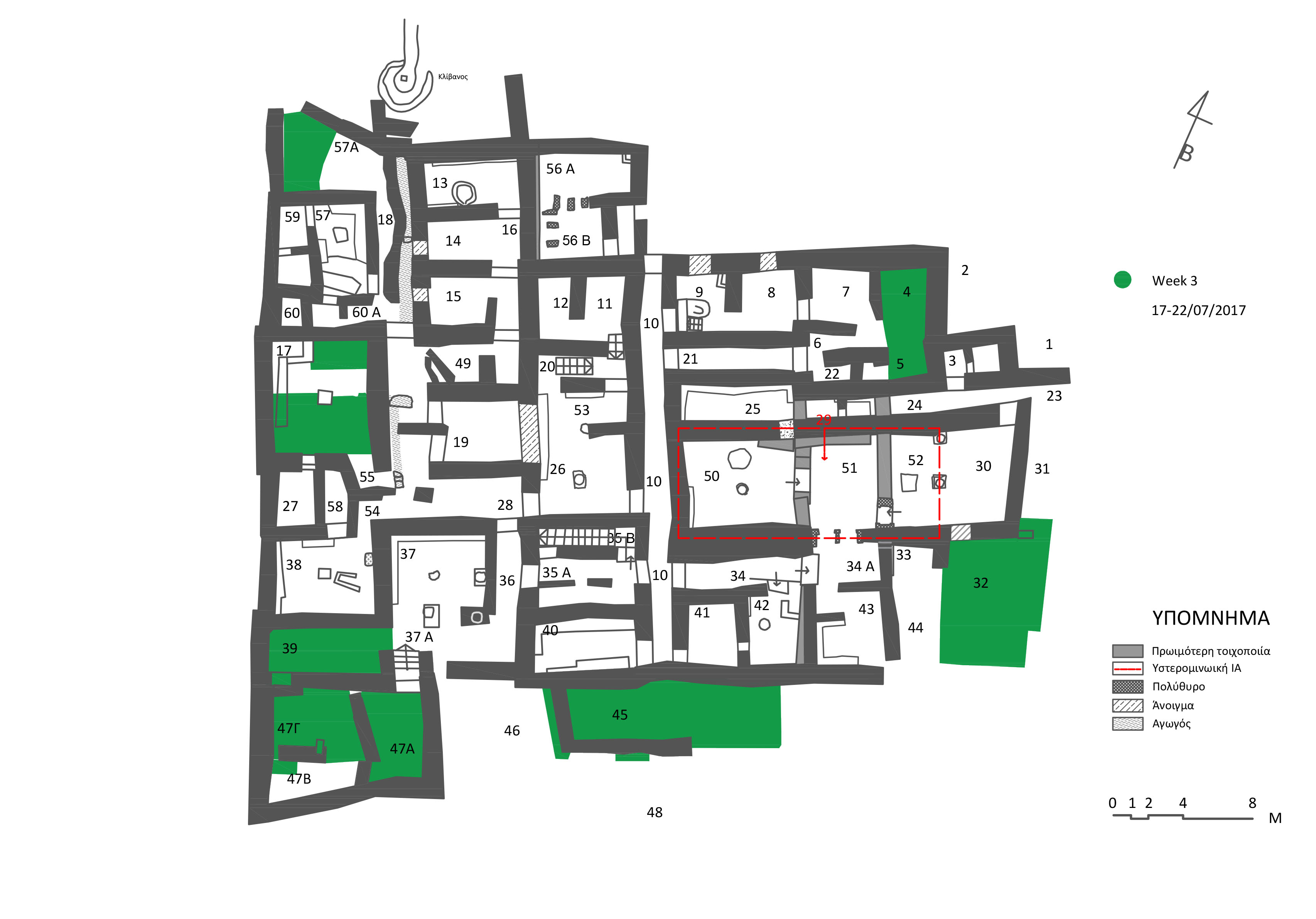 ROOMS 4-5
The excavation of Rooms 4 and 5 continues for third week. During the removal of the soil a lot of limestones and some schist stones were noticed. The finds are a few pottery sherds, two pieces of charcoal and a big amount of plaster fragments.
After the study of the steatite seal which has been found during the excavation of the previous week it is possible that the motif which is engraved on it, depicts a bird with wide open wings.
ROOMS 17 & 55
During the second week of work in Room 17, the excavation of the burnt floor layer was continued to a deeper level (Fig. 1). More specifically, it continued to the level of the threshold of the south doorway leading to the adjacent Room 27, which had already been partly revealed during the excavation of the latter in 2016 and was fully excavated during this week’s work (Fig. 2). It becomes now clear that it is exactly on this level that the central stone pillar of the room as well as the stone construction along the west wall were founded. The relatively scarce finds of the layer include some conical cups (Fig. 3), a grinding stone, three pieces of rock crystal and a small stone pendant in the shape of a seashell (Fig. 4). 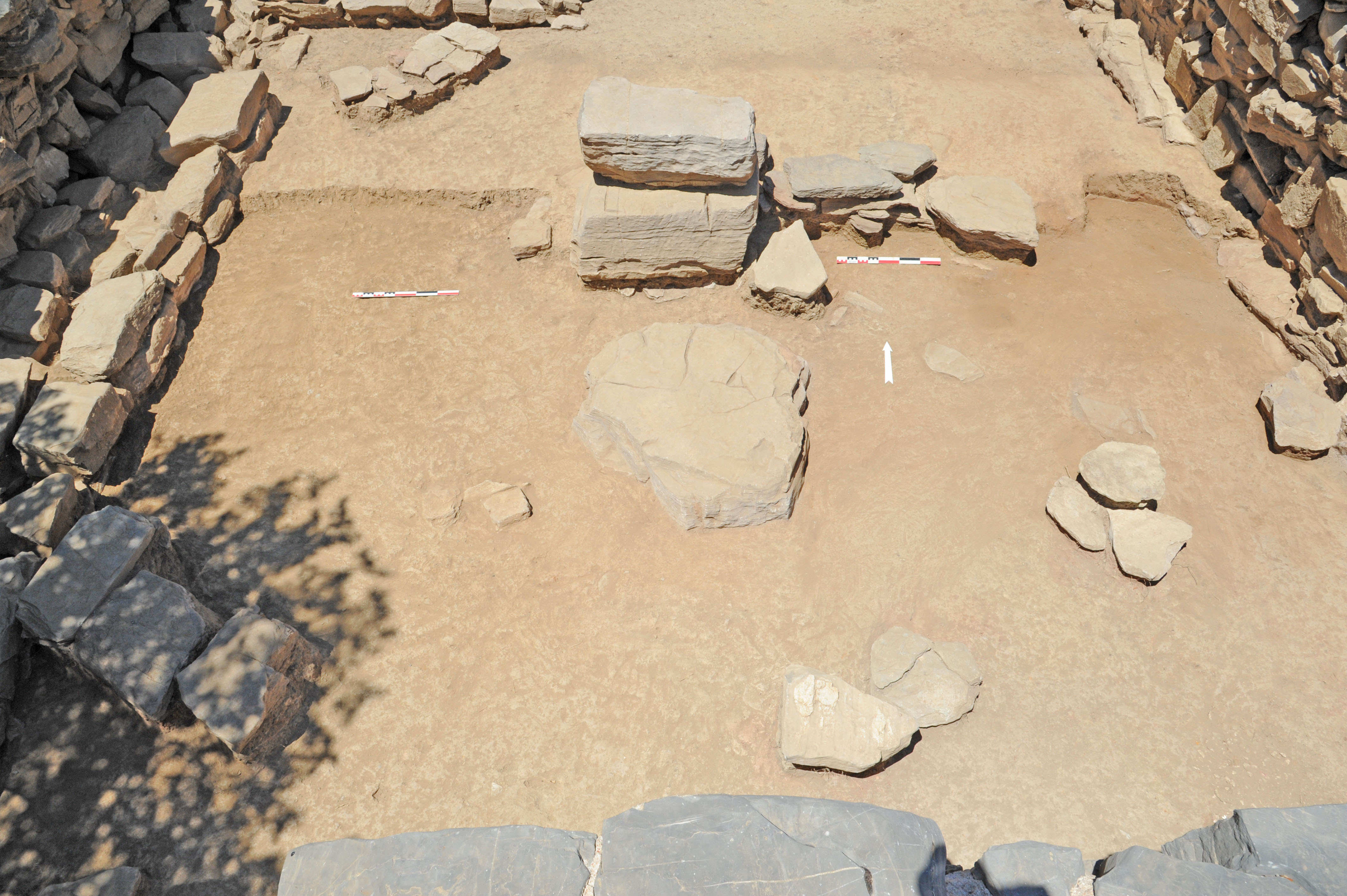 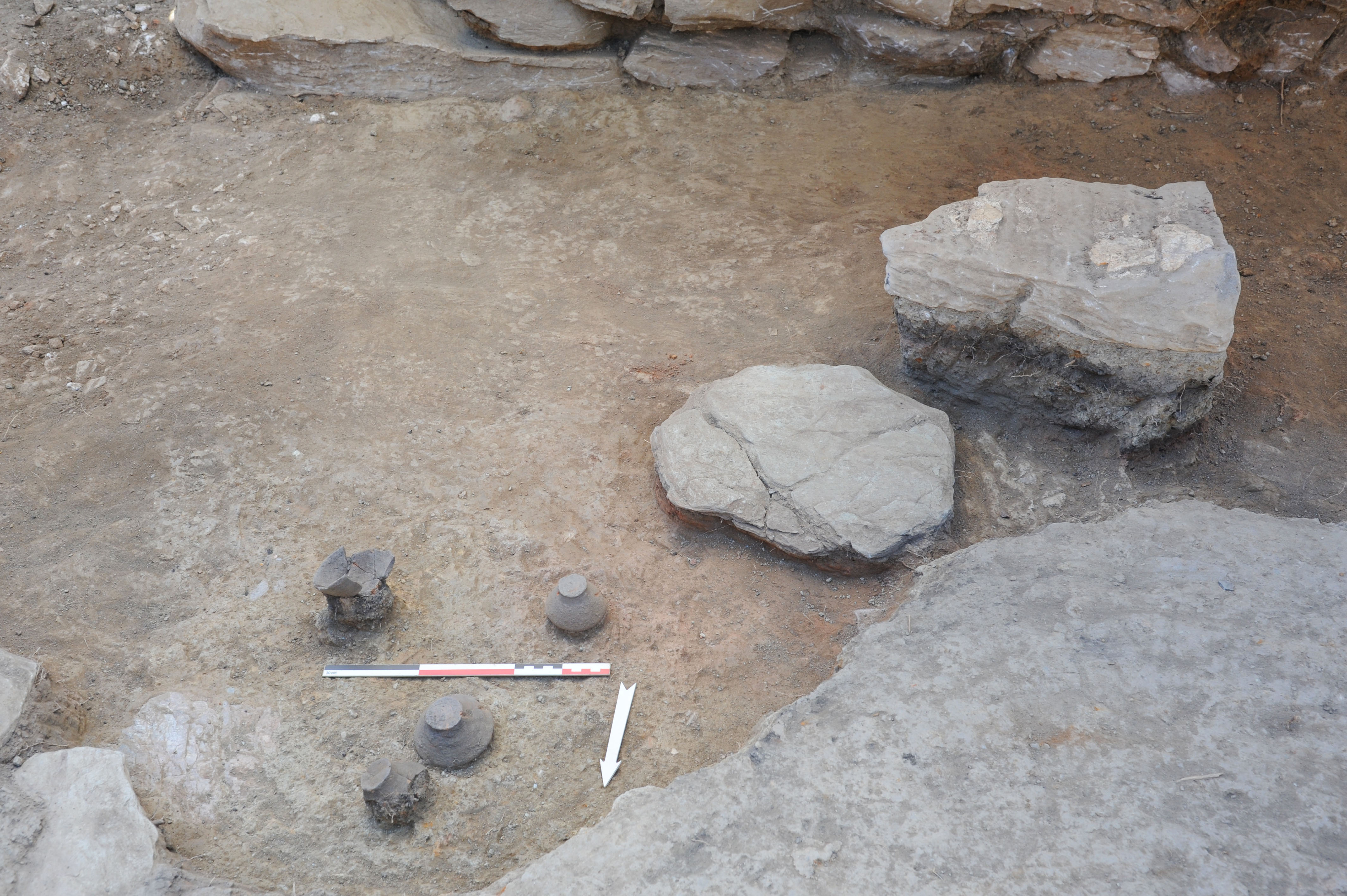 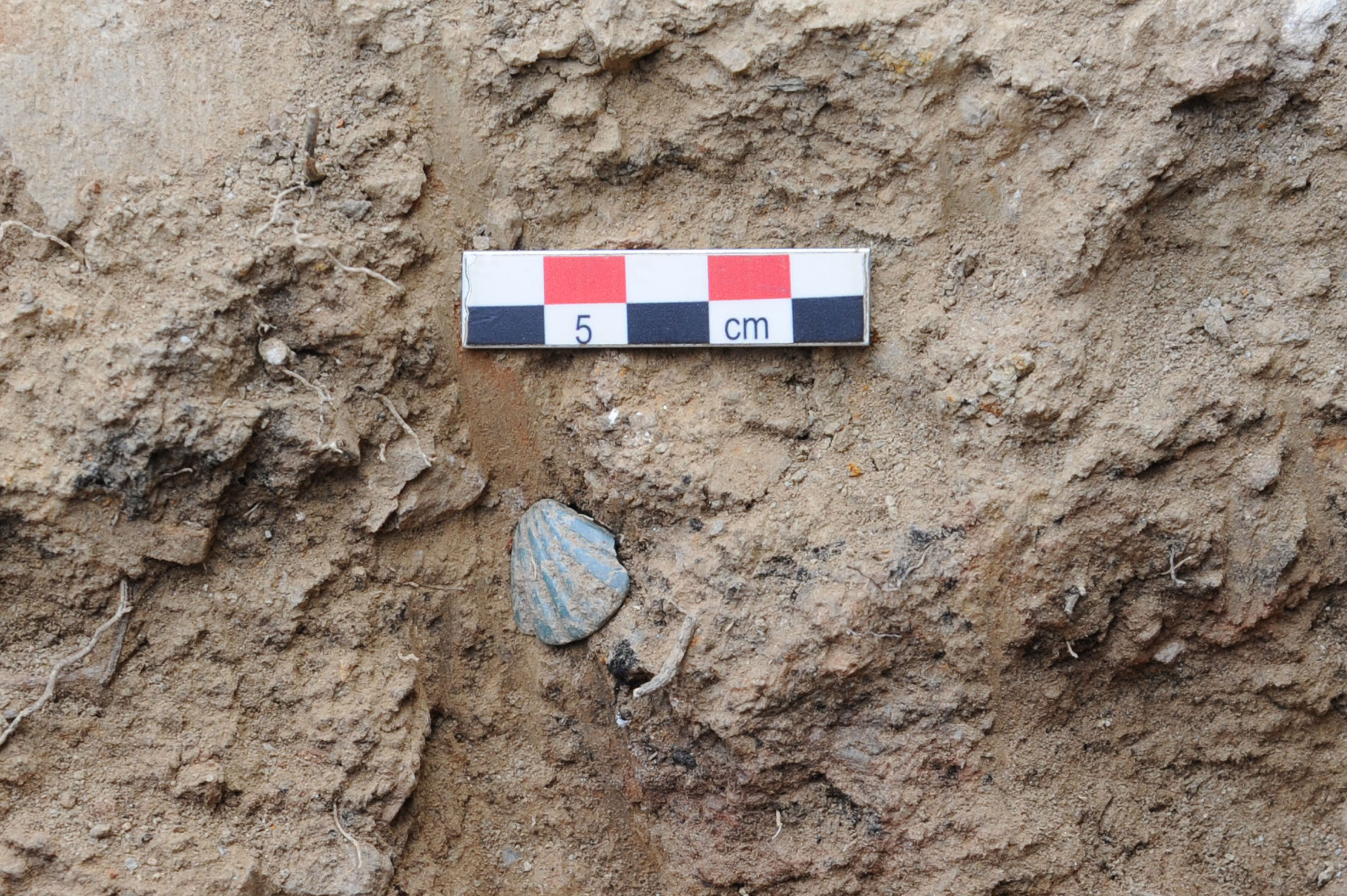 ROOMS 32-44
The excavation of Rooms 32-44 (Fig.1) is completed revealing a highly disturbed paved floor in Room 32. Room 44 is only partially excavated.
The north and east side of Room 32 is further excavated. Although no walls were found, the roman intervention at the northeast side of the room is very clear (Fig.2). Aside from some pottery sherds, no other artifact was found. 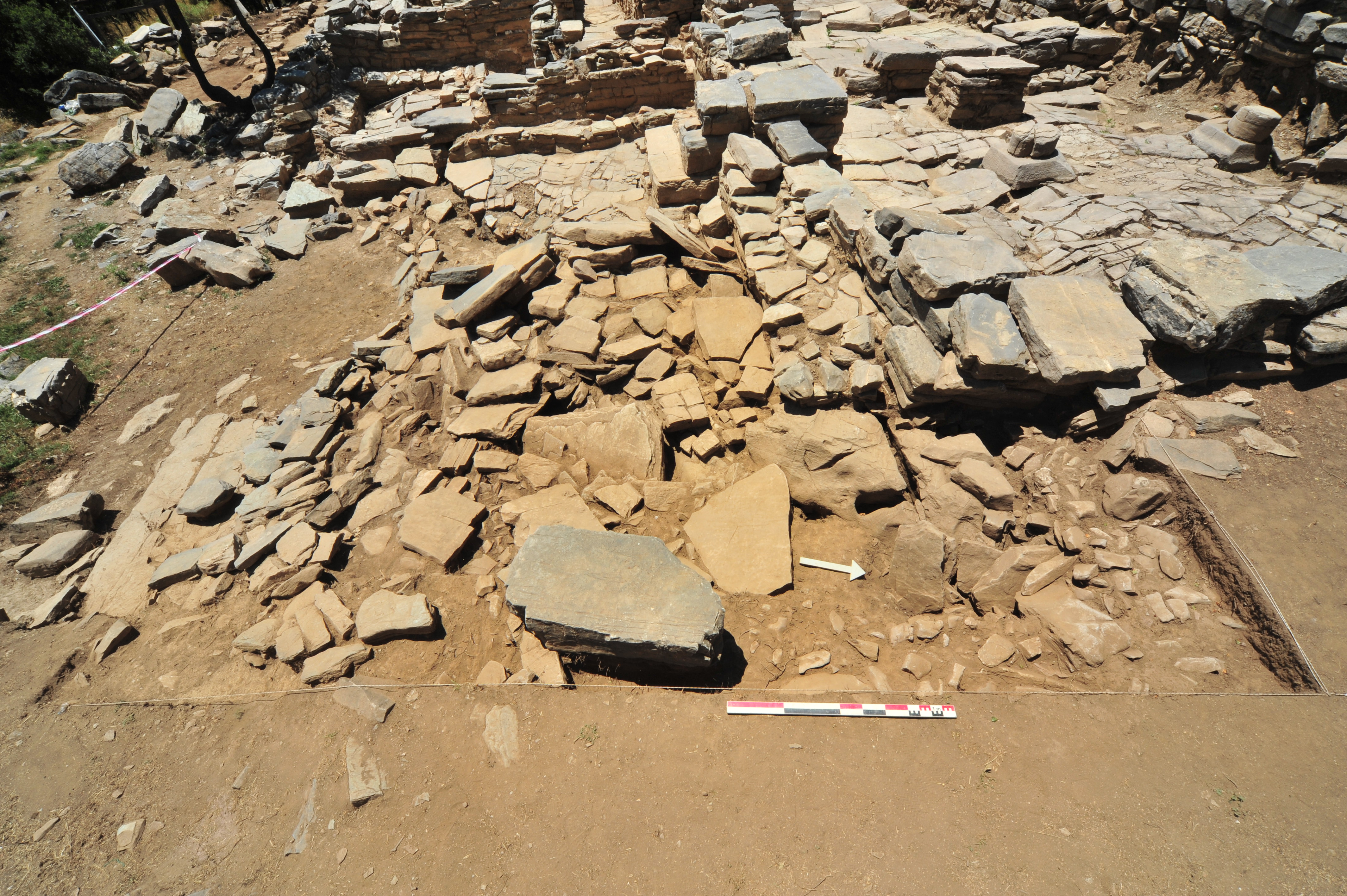 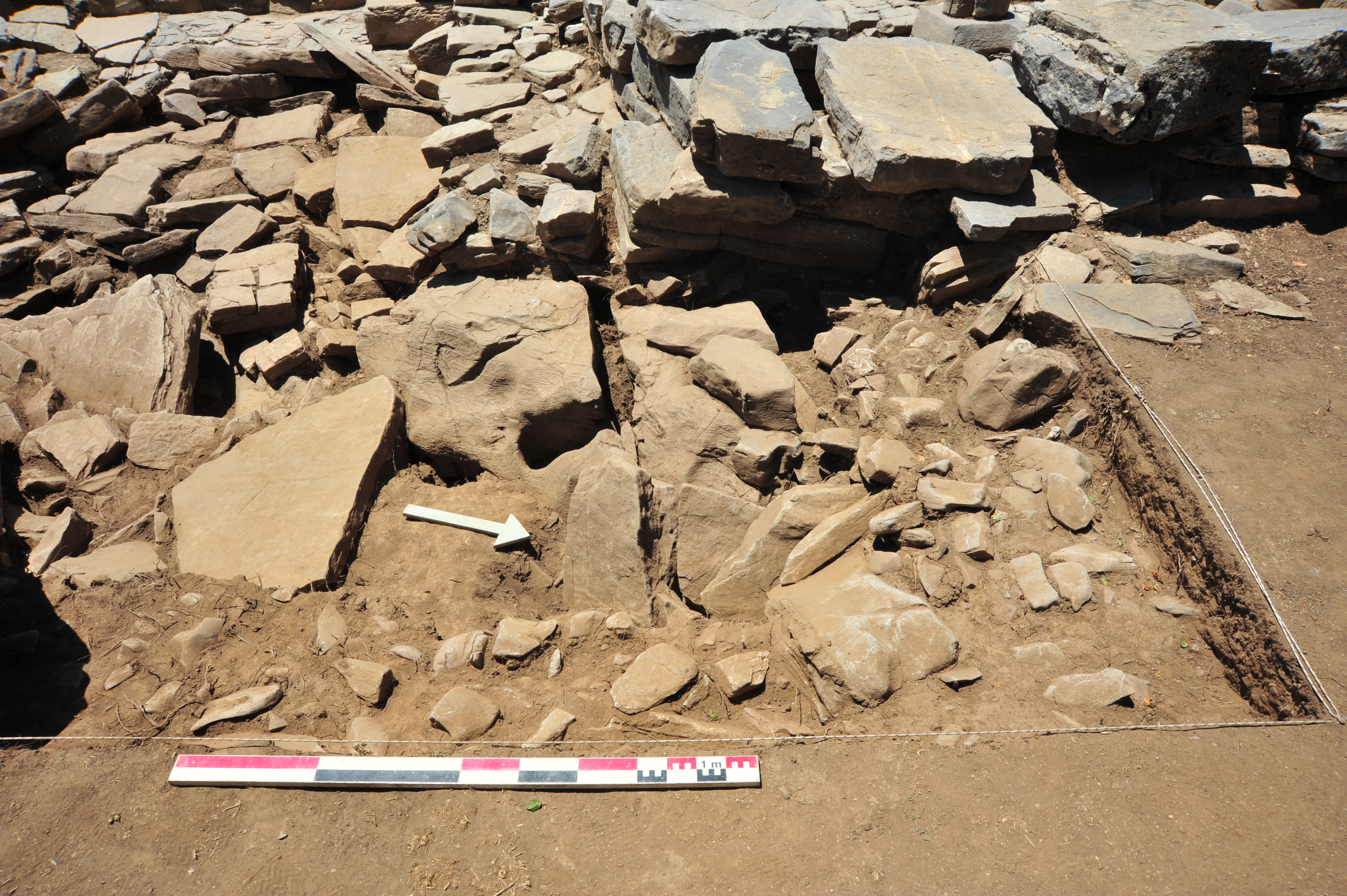 ROOM 39
During the third week, we continued the excavation of the lephida-earth layer with several fallen limestones and schists slabs from the floor of the upper story (Fig.1). The pilaster at the NE entrance of the room has been revealed up to the level of five blocks (Fig.2). At the NW corner of the room was also revealed a small part of a fallen pebbled floor from the upper storey (Fig.3) and were collected many vessels (mostly conical cups), an one-handled cup (Fig.4), a small part of rock crystal (Fig.5) and animal bone fragments. 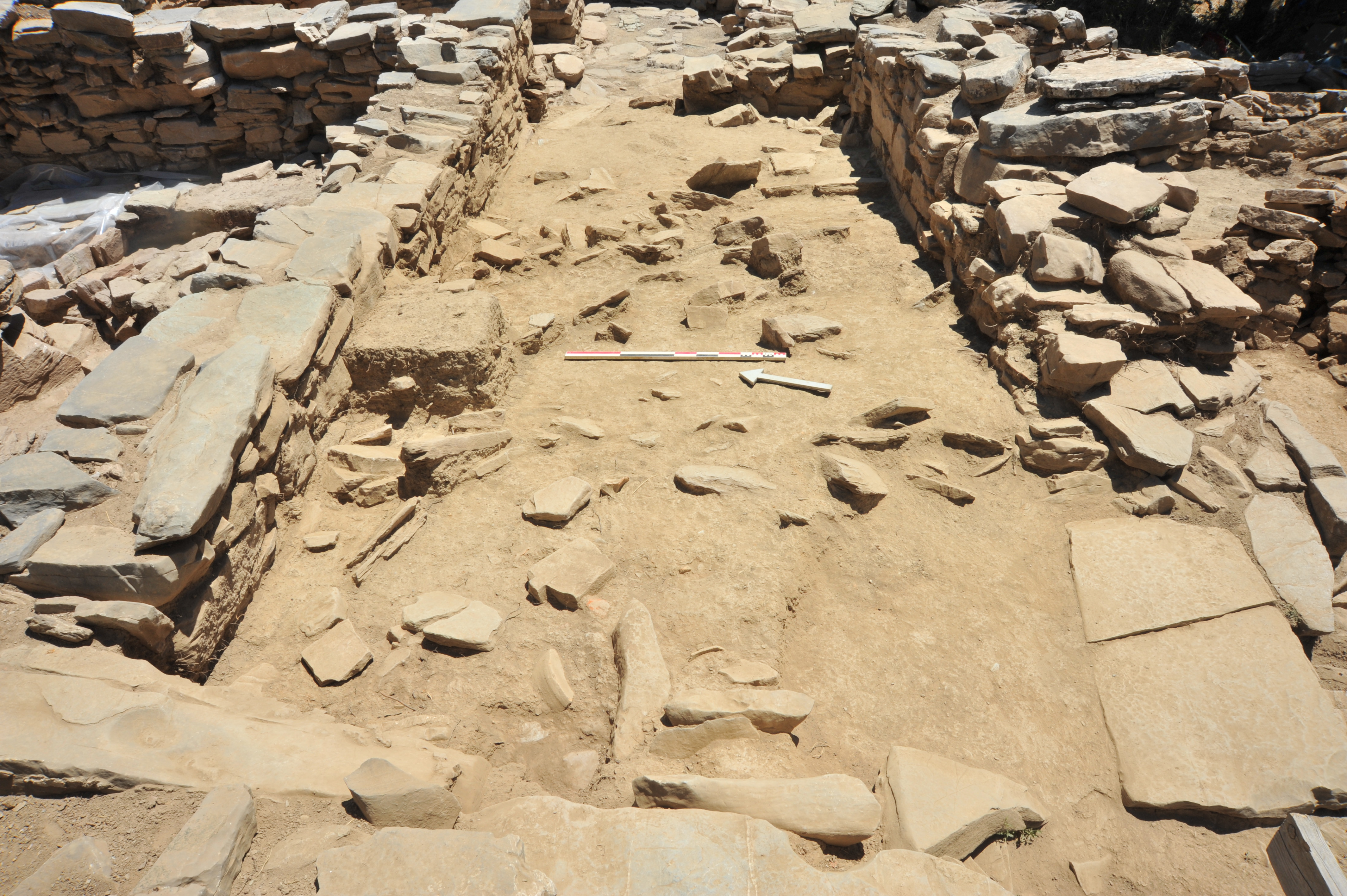 ROOM 45
During the third week, excavation continued in room 45 in order to reveal the rest of the new walls of the room which came to light last week (Fig.1). In the western part of room 45 walls are preserved in a good condition (both the western and the southern wall) but in the eastern part of room 45 the southern wall seems to be more damaged due to illicit excavations. ROOM 47
During the third week, the excavation focused in South, Central and East Wing (Fig.1). Works of conservation also started. Among the finds worth mentioning are a jug (Fig.2), a lid of a stone vessel (Fig.3), a copper foil and a clay part maybe of a kiln (Fig.4). AREA 57A
This week the excavation continued in the west part of the Area 57A. In the SW corner closed to west wall, a part of paved floor was discovered (Fig.1) Also, some parts of the paved floor was discovered in the centre and in the north part of the room. The whole area was plenty of ceramic parts from different vessels in shape and dimensions. A sherd with relief motif probably depicts two horns.