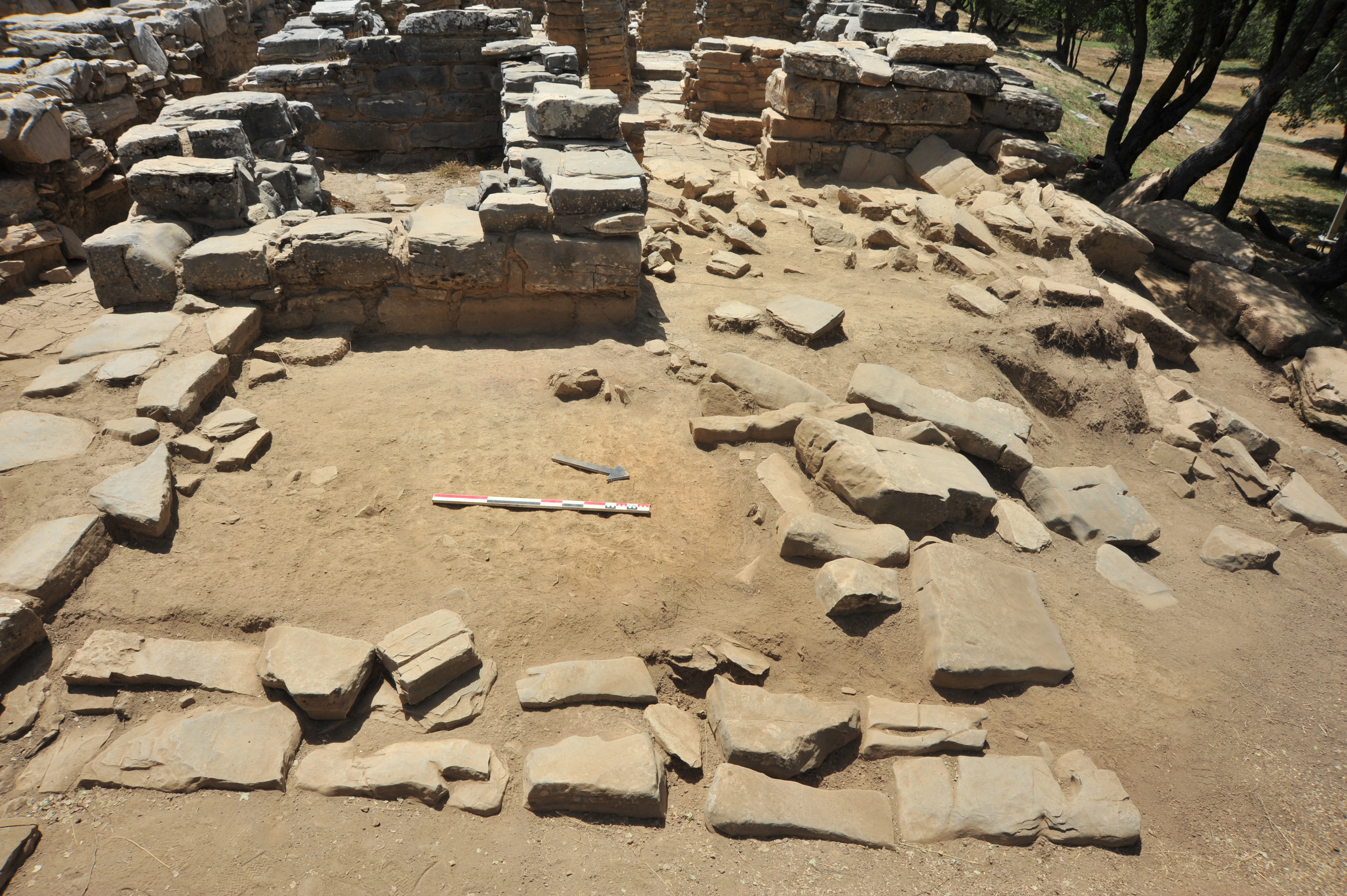 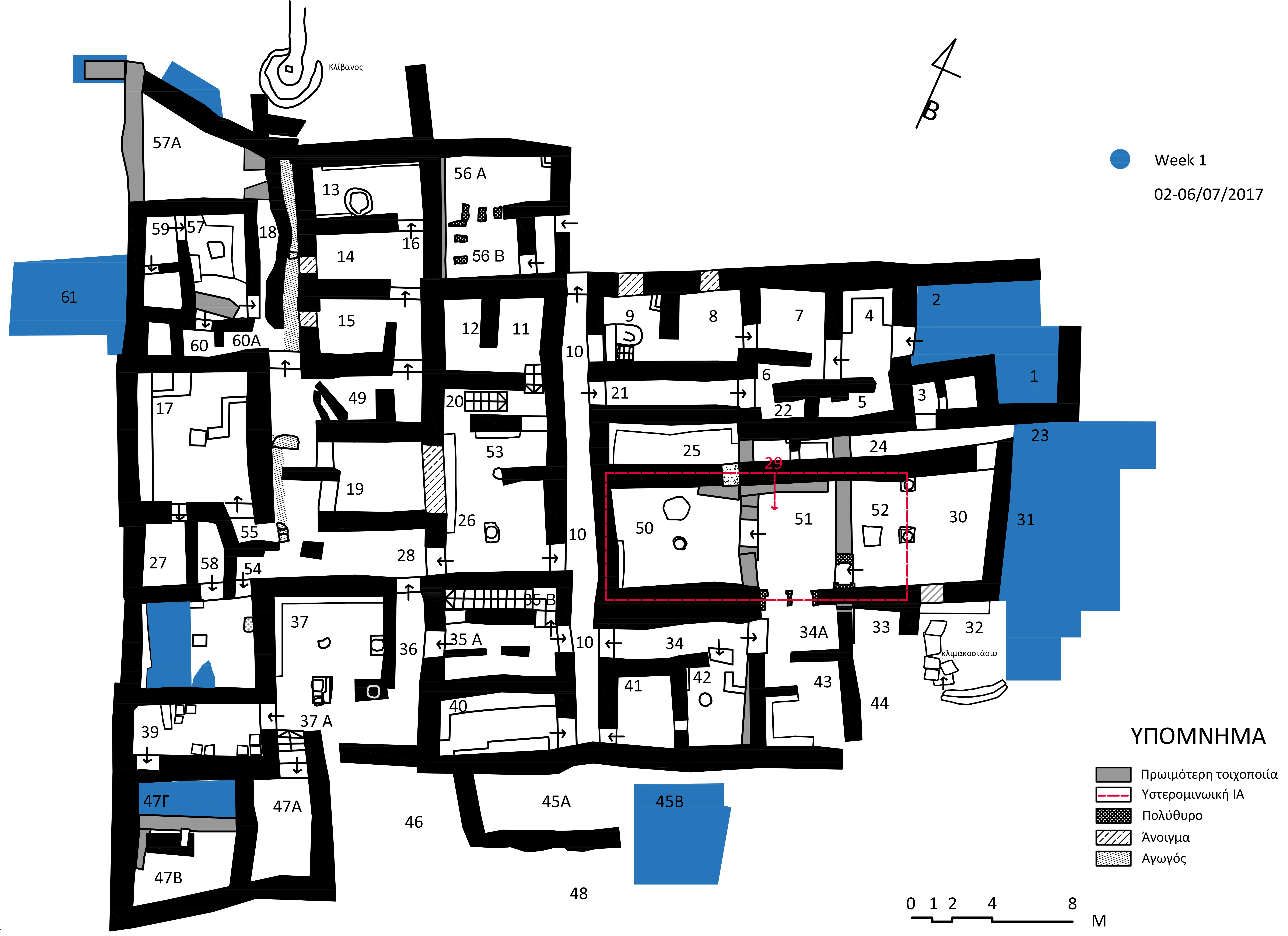 ROOMS 1-2
Rooms 1-2 (Fig.1) are located at the NE part of the Central Building. They were uncovered for the first time during the ’80s. This week were revealed the East and South Wall of Room 1 and also the North Wall. The NE border of the Rooms has not yet been defined. A layer of lephida-earth and a large number of various-sized fallen limestones and schists, fallen from the upper storey was removed. Among the finds of the layer were two groups of clay pots and other pottery sherds, several conical cups, a incense burner (Fig.2), a clay disc, pieces of a lime plaster and animal bone fragments.

AREA 23/31
Area 23/31 is located at the east side of Zominthos main building. It is a large area with no visible walls at the east and south side.
During the first week (Fig.1), the biggest part of the first layer is investigated, revealing no artifacts other than some pottery fragments and animal bones. At the north-west side, a high amount of fallen stones is located with pottery of the roman times among them (Fig.2). 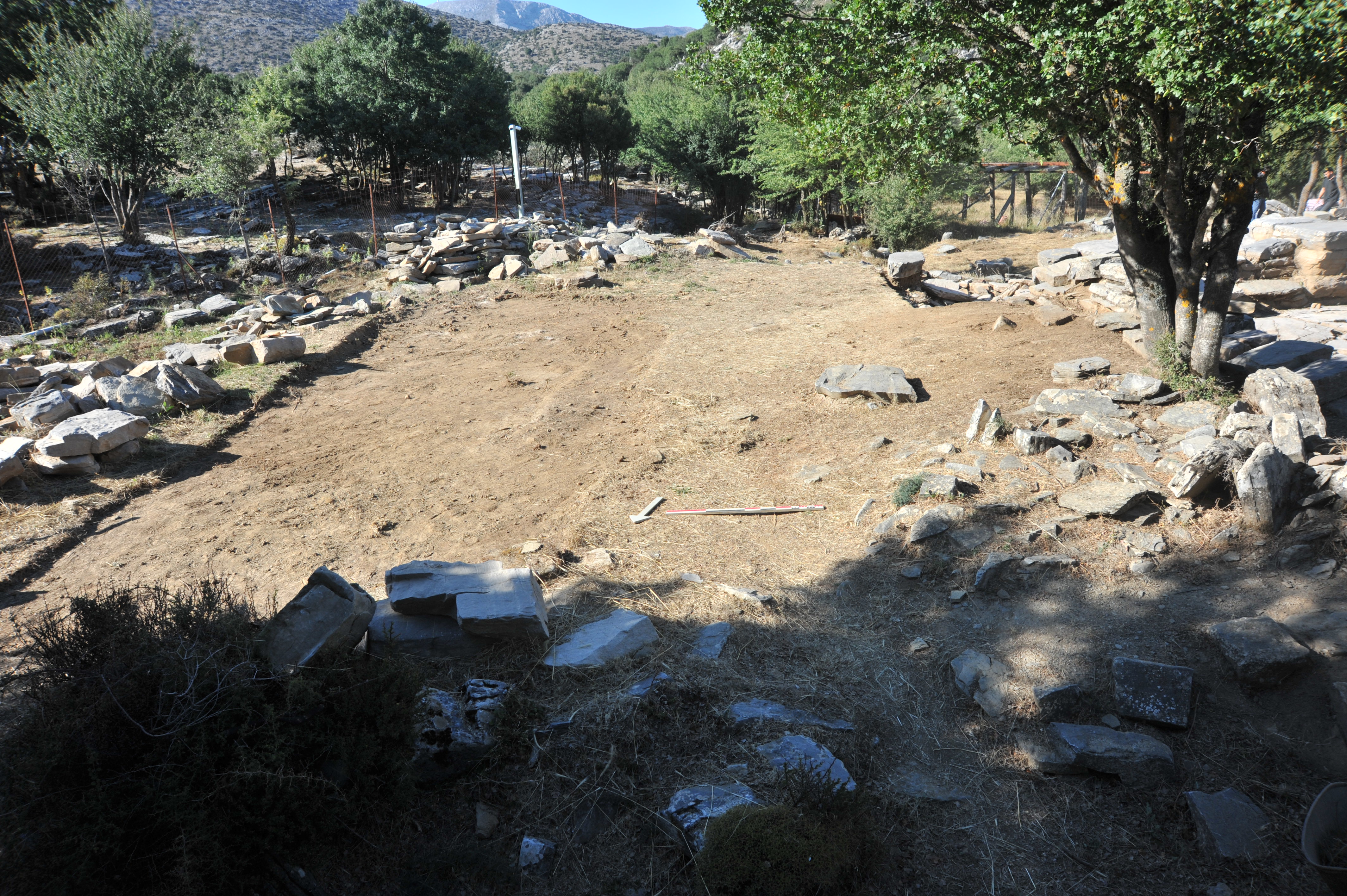 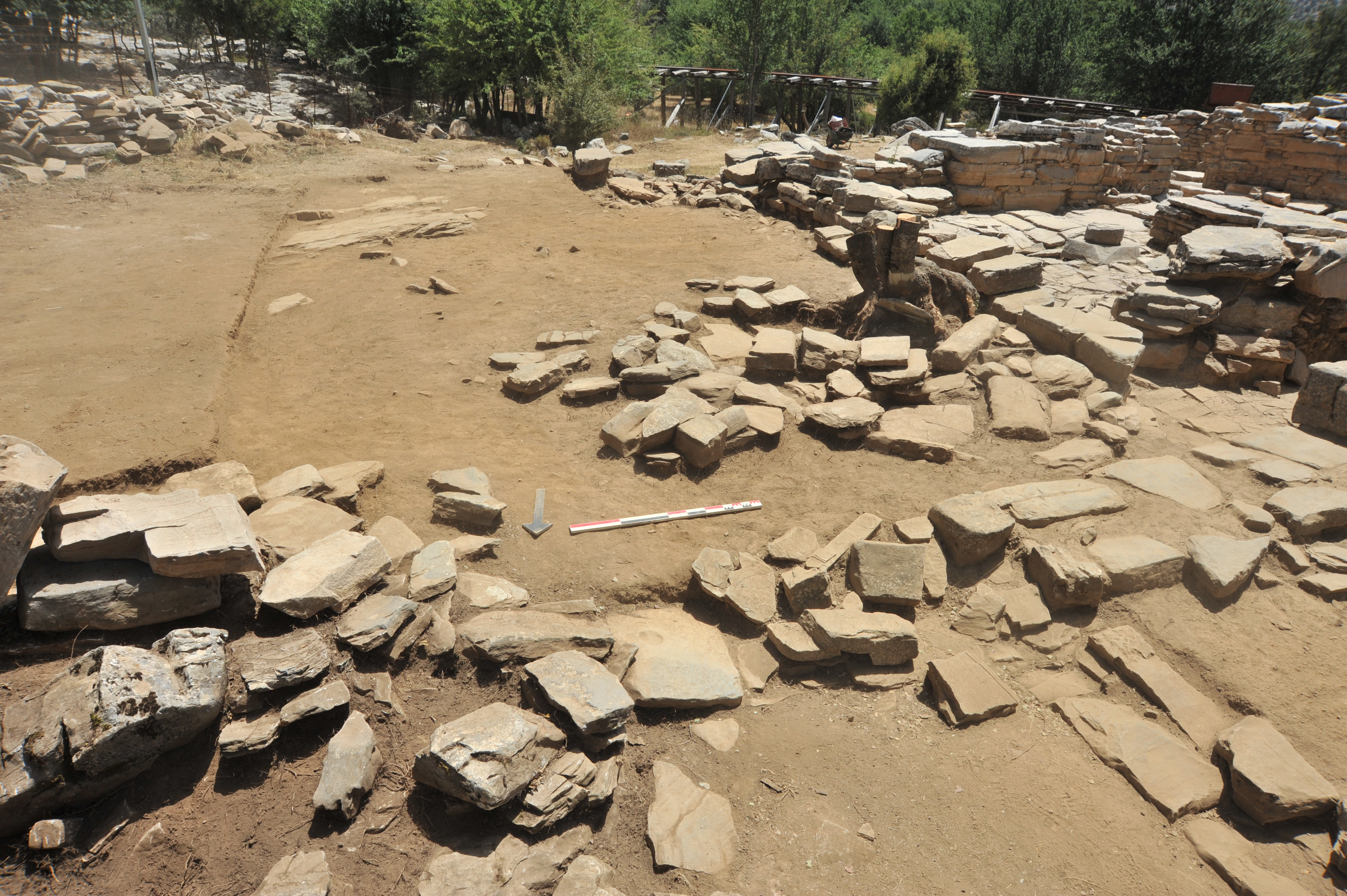 ROOM 38
Room 38 is a large room in the SW part of the building, with a central pillar and a metallurgical pit. It was excavated during the last two excavation seasons. Work in the room resumed during this season’s first week with the goal to investigate specific parts that remain partly or completely unexcavated. More precisely, a dark burnt layer with clayish earth, belonging to the floor layer of the final destruction of the building and revealed during last year’s work, was removed in the western part of the room. Interesting finds made in this burnt layer were an obsidian blade and a small bronze chisel (Fig. 1). In the southern part of the room, in the area between the central pillar and the south wall, a small part of the paved upper floor which was unearthed during the 2016 season remained in situ since then (Fig. 2). This week its slabs were removed in order to investigate the fill underneath. With the completion of the excavation in this area down to the level of the western part of the room, the pavement of the ground floor came to light under the layer of burnt earth (Fig. 3). 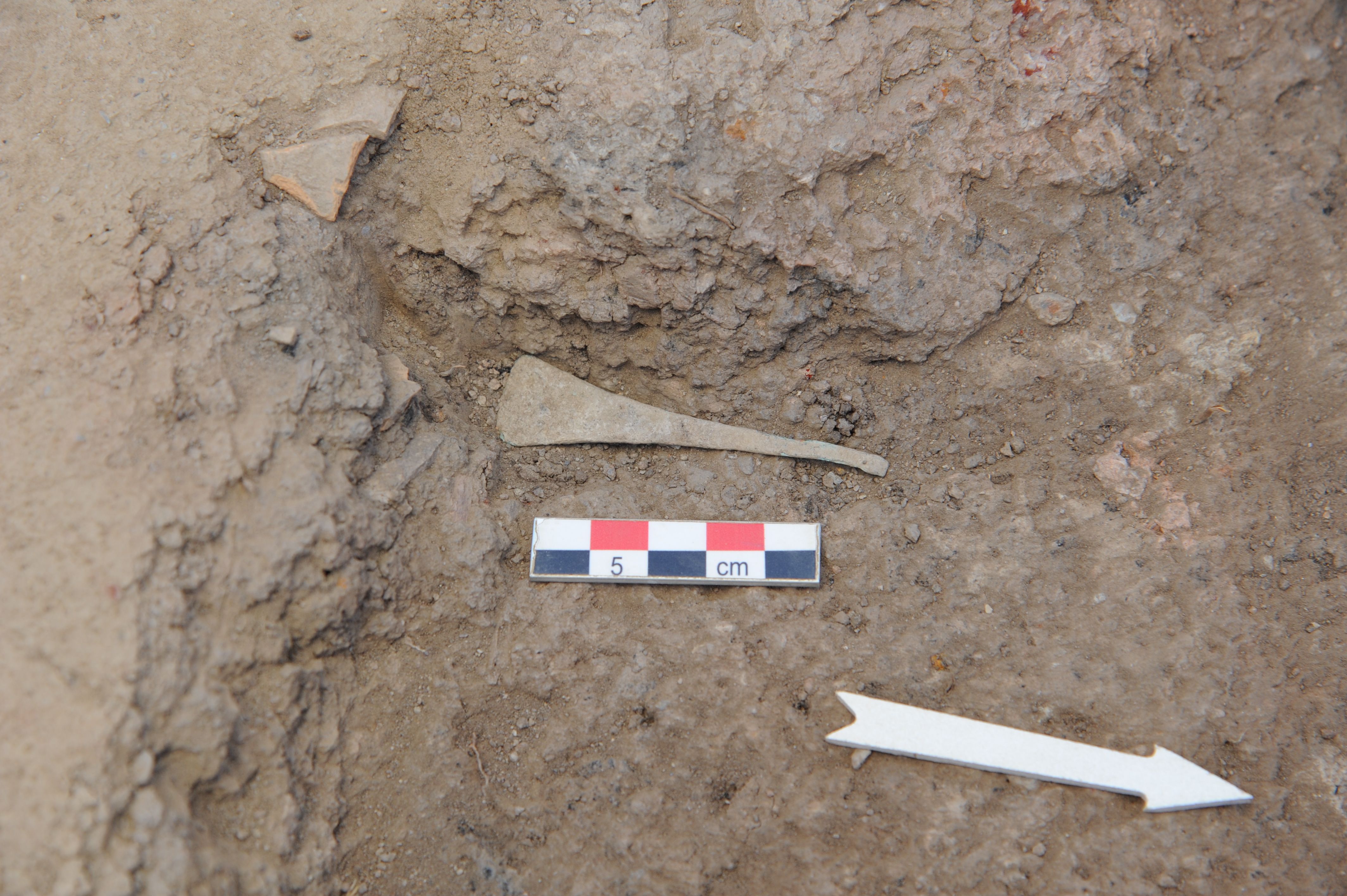 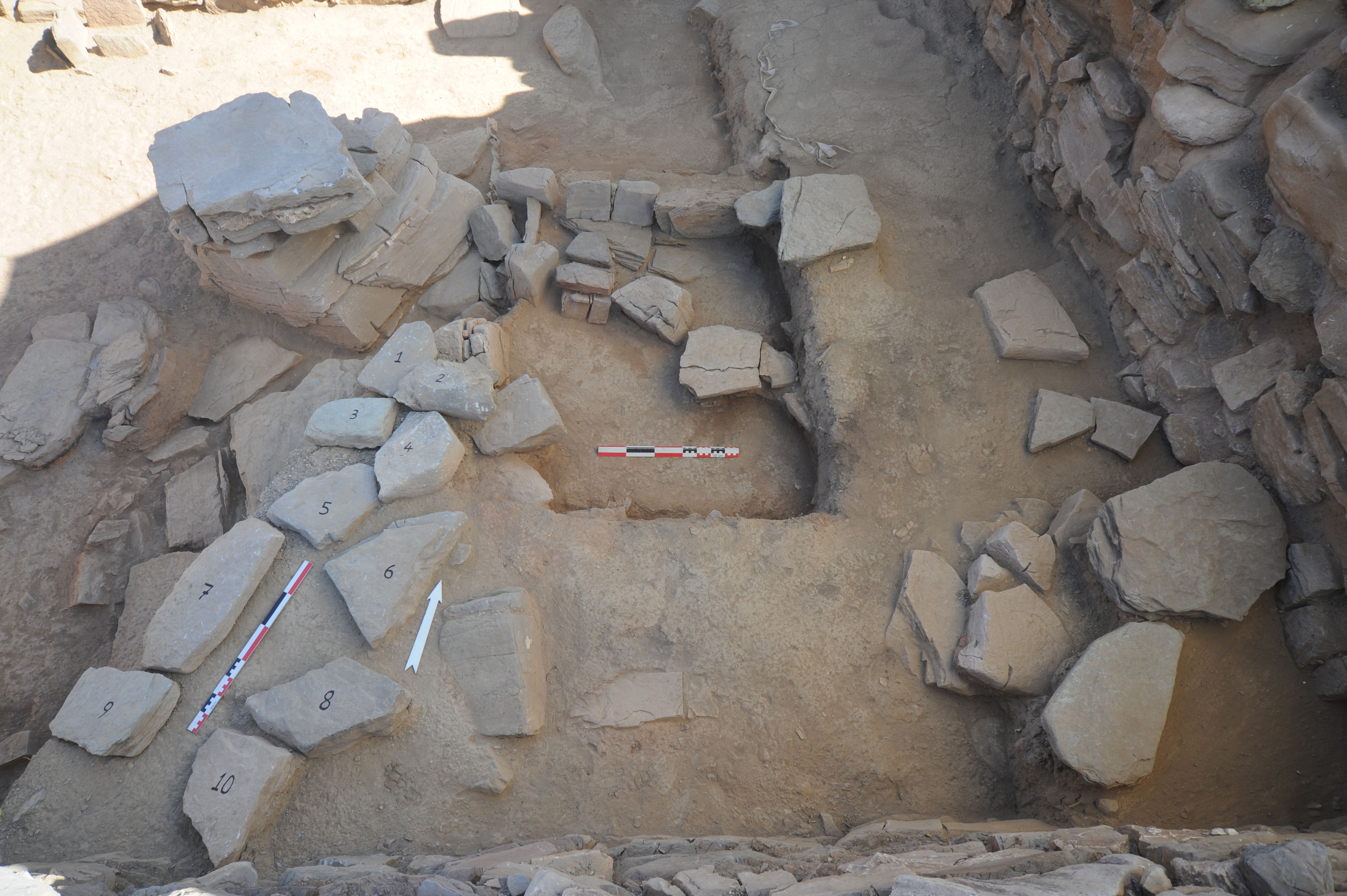 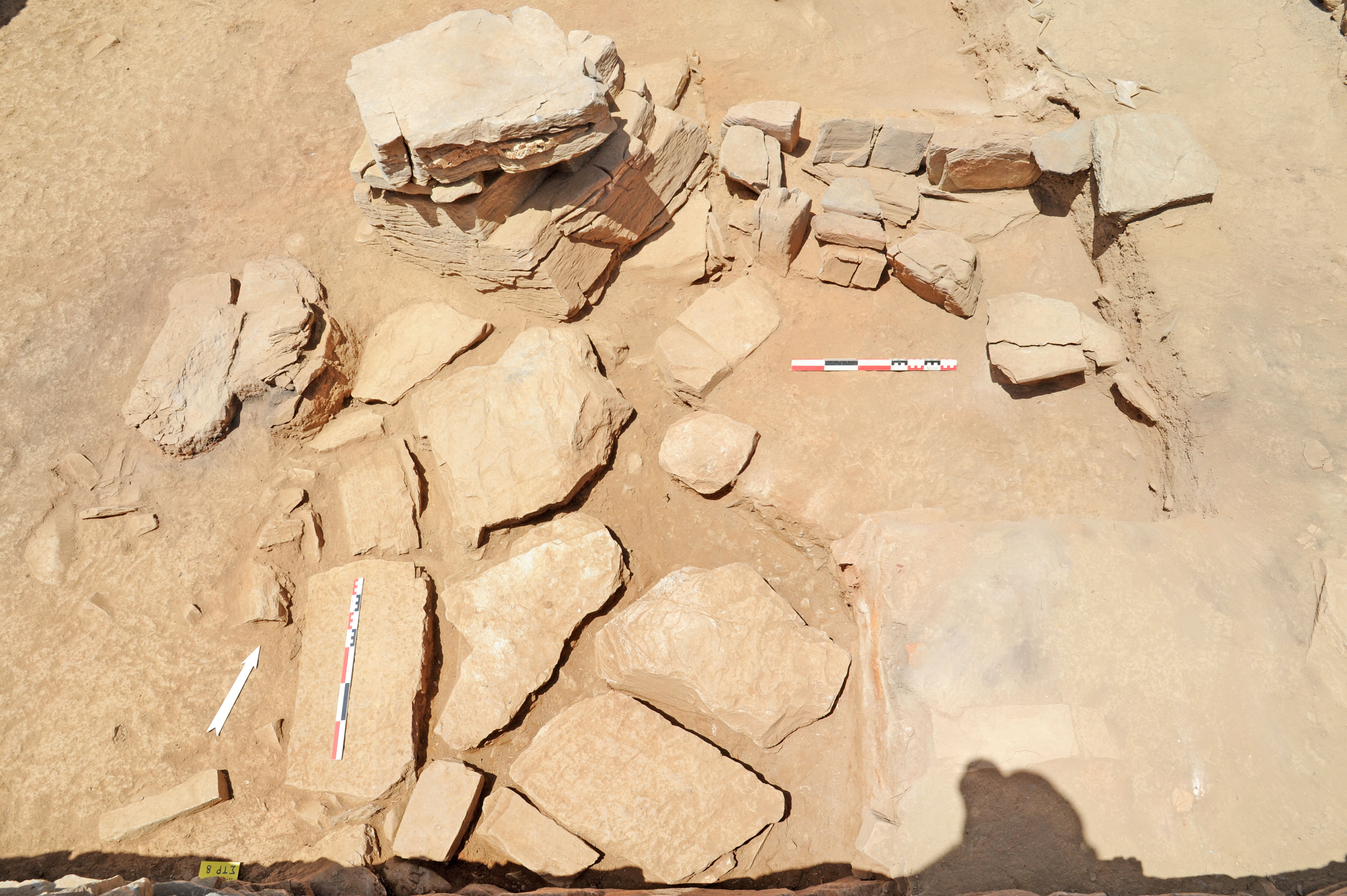 AREA 45B
The area 45B is located on the south side of Zomintho’s central building. On its west side it is adjacent to the area 45A and on its north side to the areas 41-43. The western part of 45B has been partly excavated last year and this year we’ re going to continue the excavation of this part and of the eastern part as well (Fig.1-2). On the western part, it is revealed a row of stones adjacent to the south wall of the area 45A. Large quantity of LM ceramic parts from different kinds of vessels in shape and dimensions like conical cups, cooking ware etc, along with a small accumulation of pebbles and bones were collected. 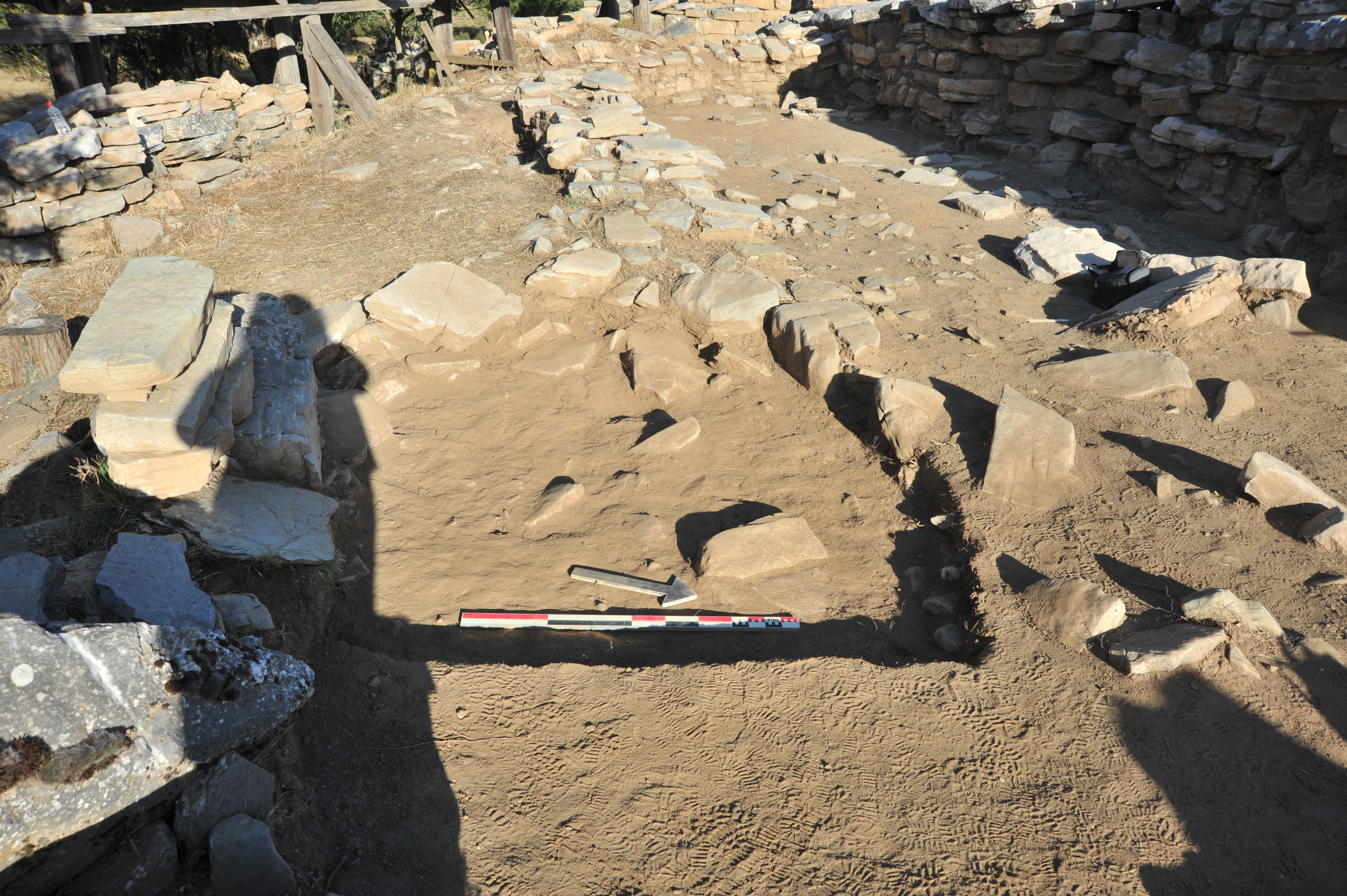 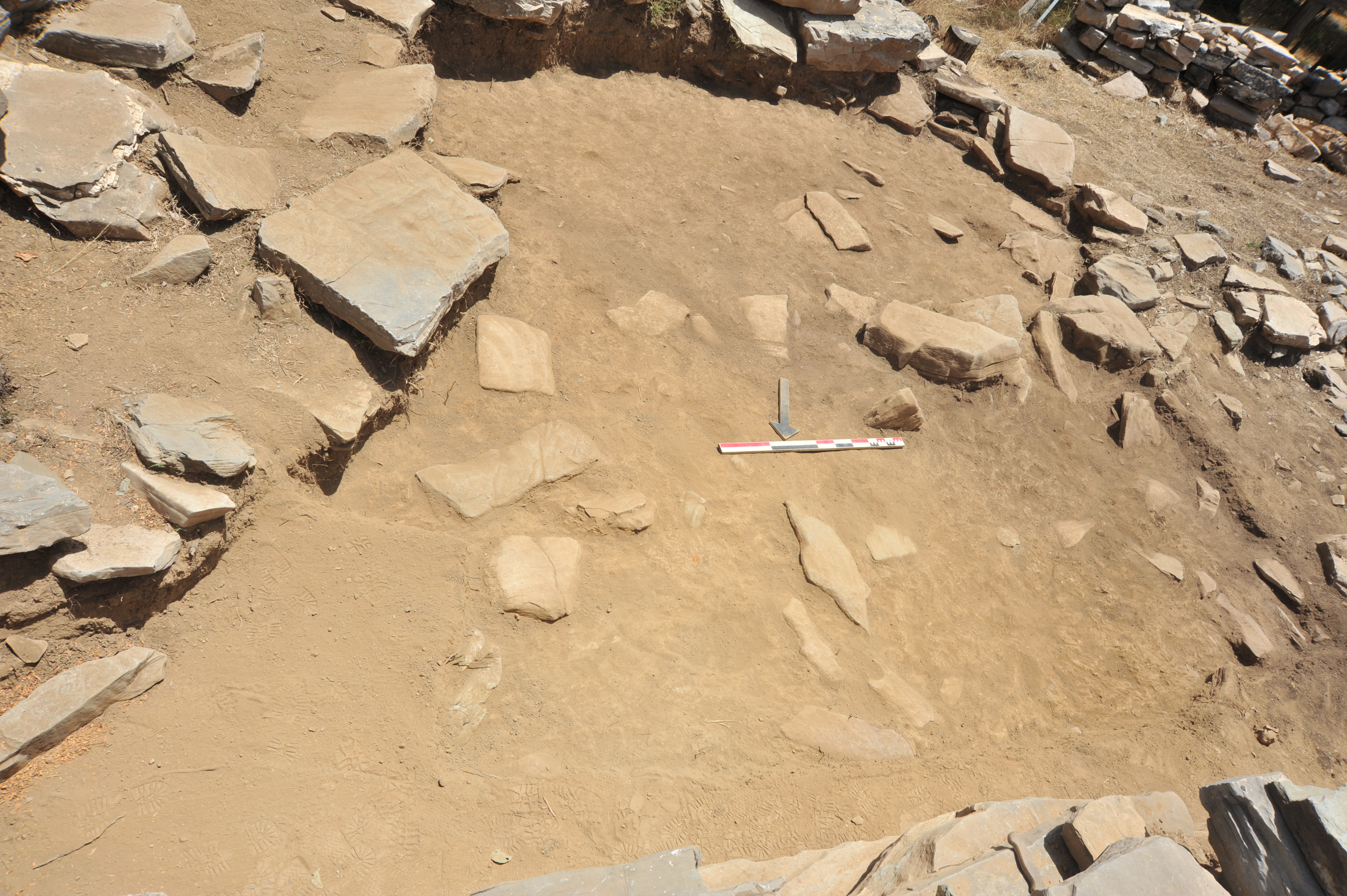 ROOM 47C
Room 47 is a big group of rooms located in the south west side of the main building of Zominthos. The excavation of Room 47C continues for third period giving important elements concerning architectonical style and room structure.
In addition the variety and quantity of ceramic gives us information about the significance and the older period of this room (Fig.1). Four parts of egg cups and others ceramics have been collected, some of them with decoration (Fig.3,4). Among the finds is an interesting part of a bronze spoon which probably used as a tool for ritual reasons (Fig.2).
The second floor of the room was wooden. Underneath, an older floor on the natural rock and probably a stone construction for the collection of water was also uncovered (Fig.1). AREA 57A
The area 57A is located on the north of the area 59 and 57 and southwest of the kiln and has been excavated during last years. This year we continue the excavation in the northwest part of the area 57A and in the external side of the north wall (Fig.1). The area was plenty of pottery from different vases in shape and dimensions, like pithos and parts of different other vases, cooking pots (Fig.2) and small conical cups. A stone grinder and a small accumulation of bones were collected. 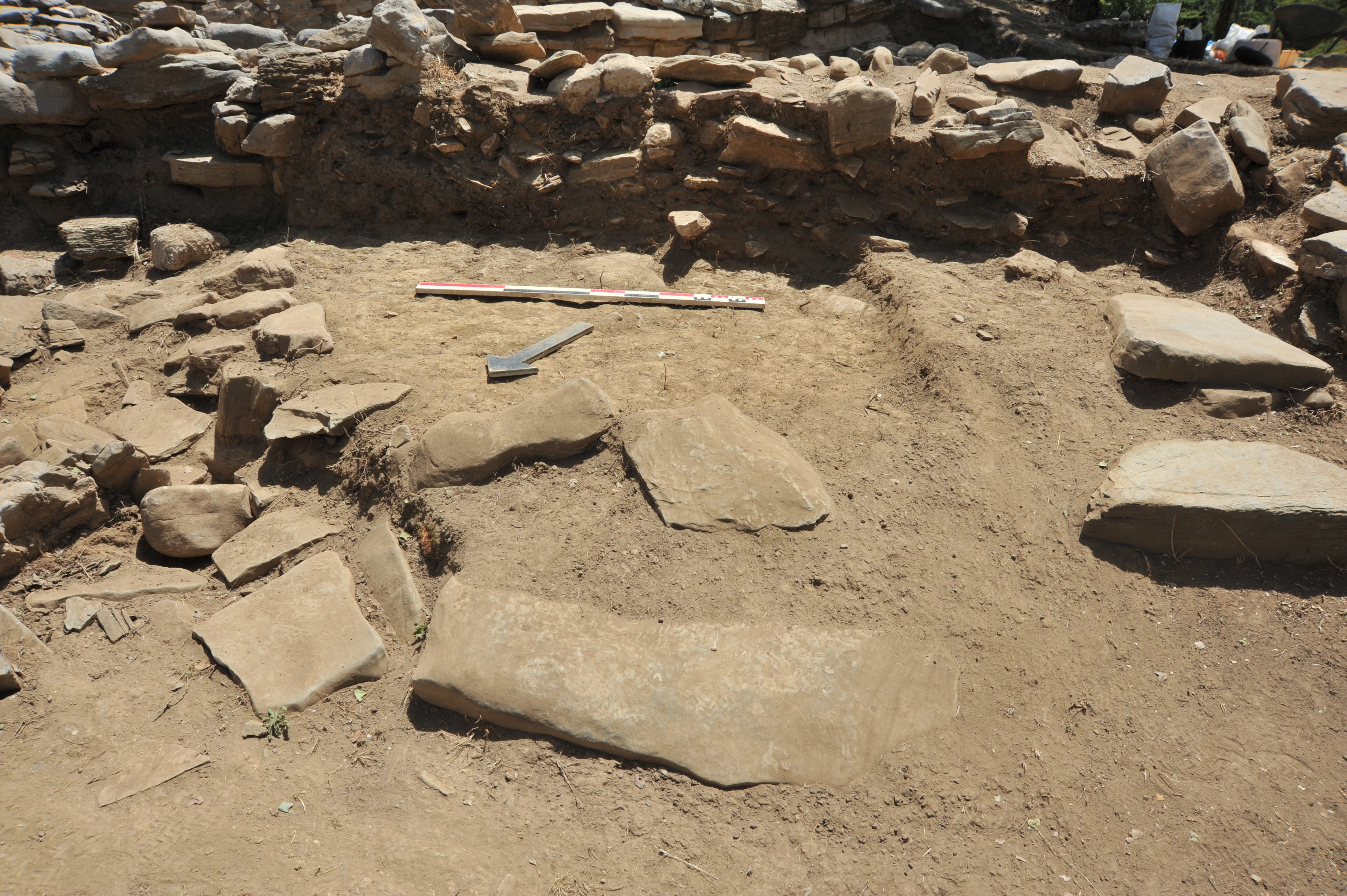 AREA 61
Area 61 is located at the northwest side of Zominthos Main Building, on the slope at the low hill.
During the first week the upper layer is removed containing small falling stones and course pottery. At the next layer (Fig.1) schists appear at the south part and large amount of pottery.