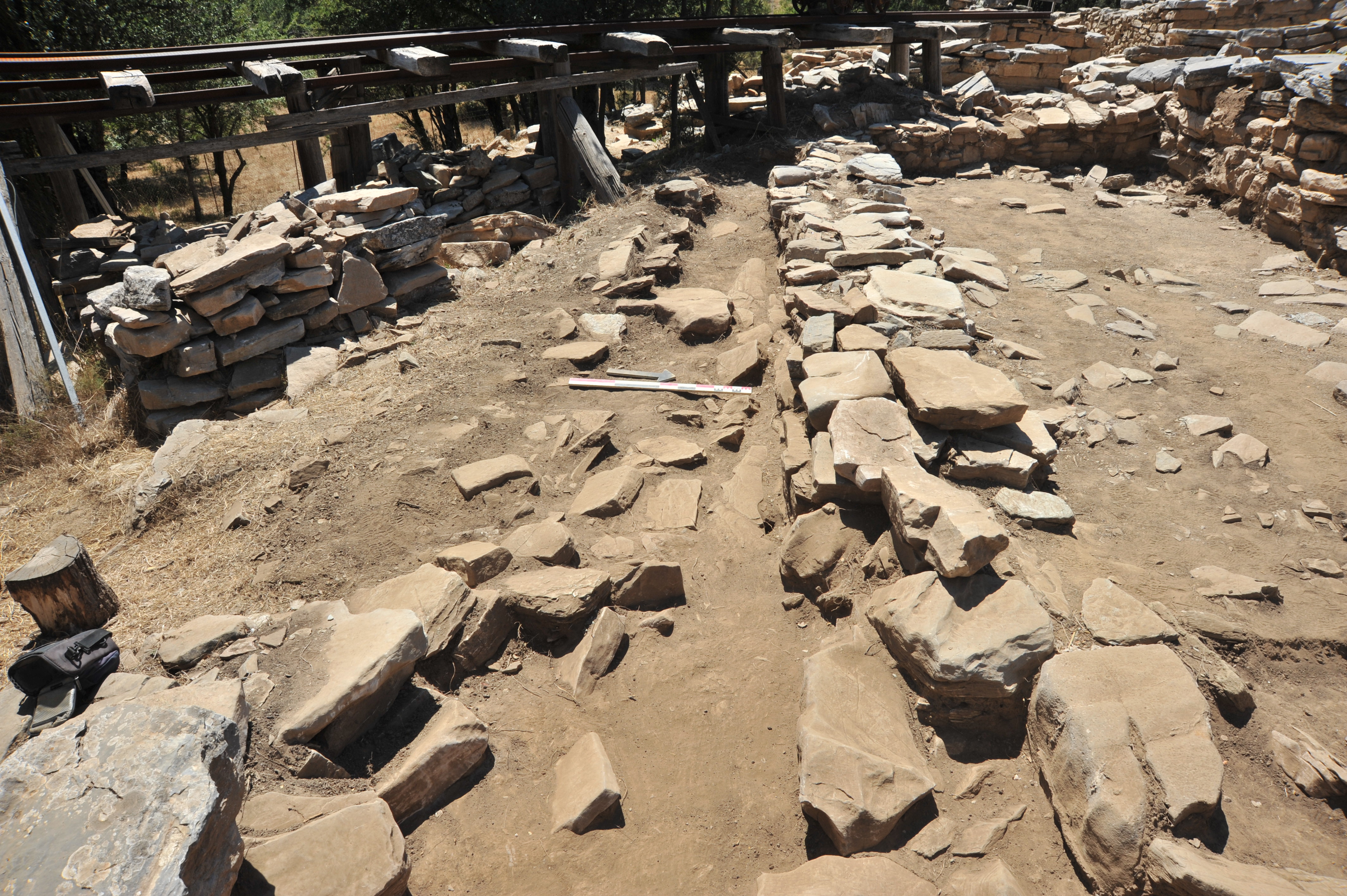 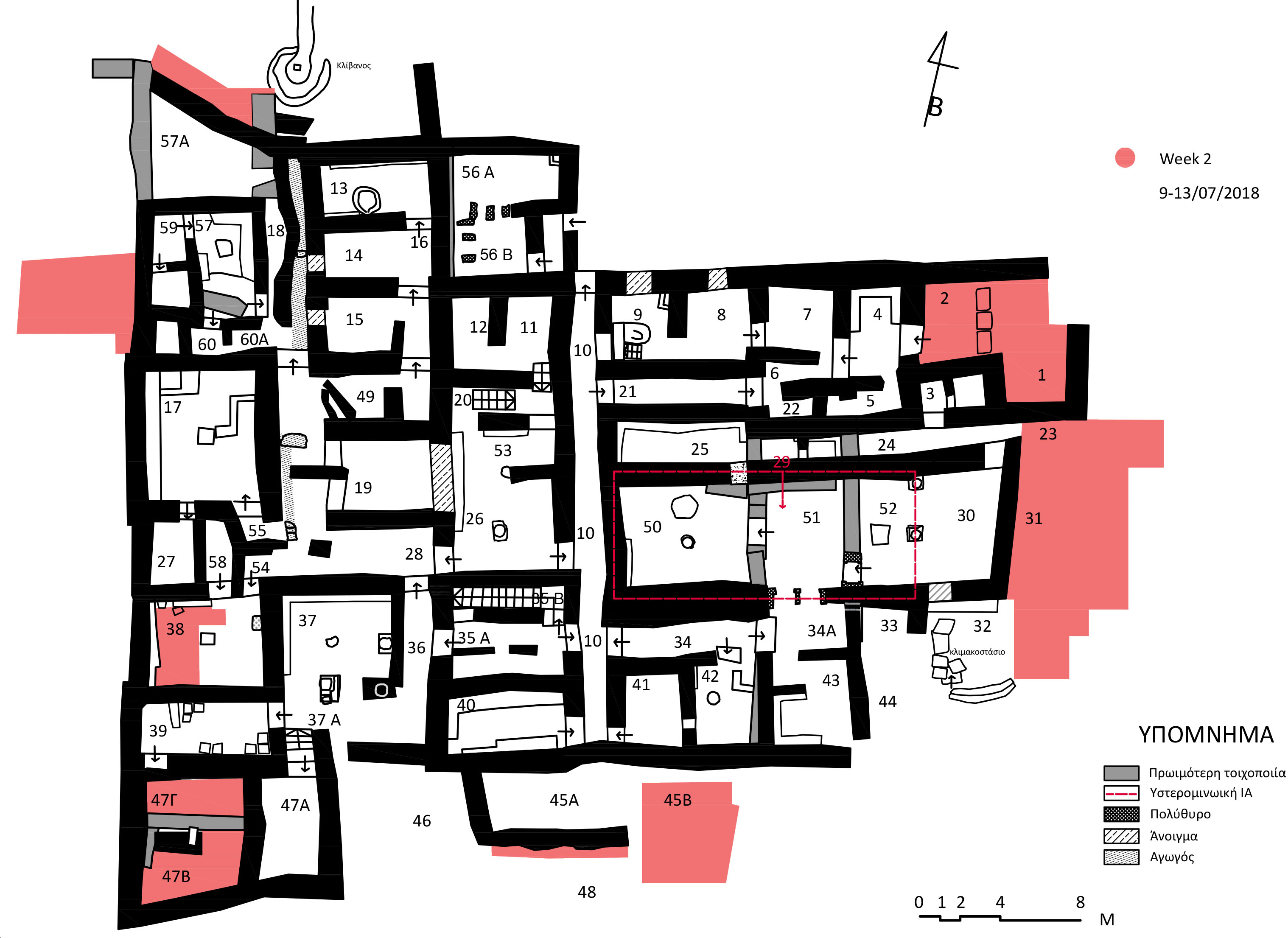 ROOMS 1-2
During the second week, at Room1 (Fig.1) was excavated a large group of conical cups and cooking pots along with parts of plaster (Fig.2), fallen from the upper storey. At Room 2 (Fig.1,3) were revealed three stone slabs which belong probably to the main NE entrance of the building. In both rooms, was investigated a layer of clay-earth with traces of fire and pebbles on it, which consist part of the fallen upper storey. Among the finds of the rooms were several conical cups, a rounded cup, a clay sealing with floral decoration, a rock crystal, pieces of plaster with colours and several small parts of burnt beams and reeds (Fig.4). 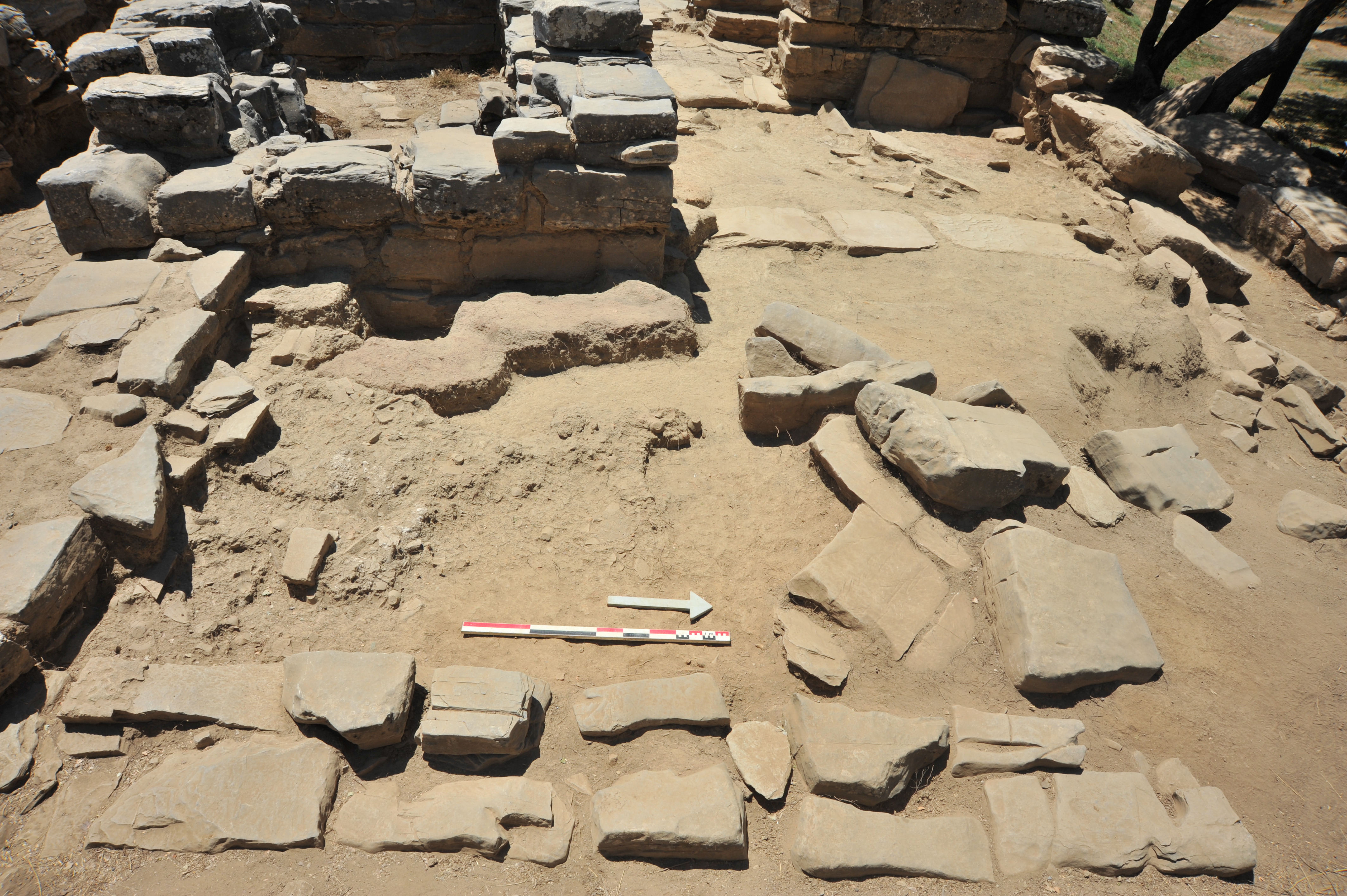 AREA 23-31
The excavation of the Area 23/31 continues with the removal of many fallen stones at the northwest side (Fig.1) possibly from an intervention of the roman times as the pottery confirms. Bellow these fallen stones, a wall constructed with small stones (Fig.2) is uncovered next to the opening towards Area 24. A small polyhedral rock crystal has been found.
So far, no walls have been found at the south, east and north of the Area 23/31. The most characteristic feature of the south part of this area is the natural rock (Fig.3) that covers a large area. 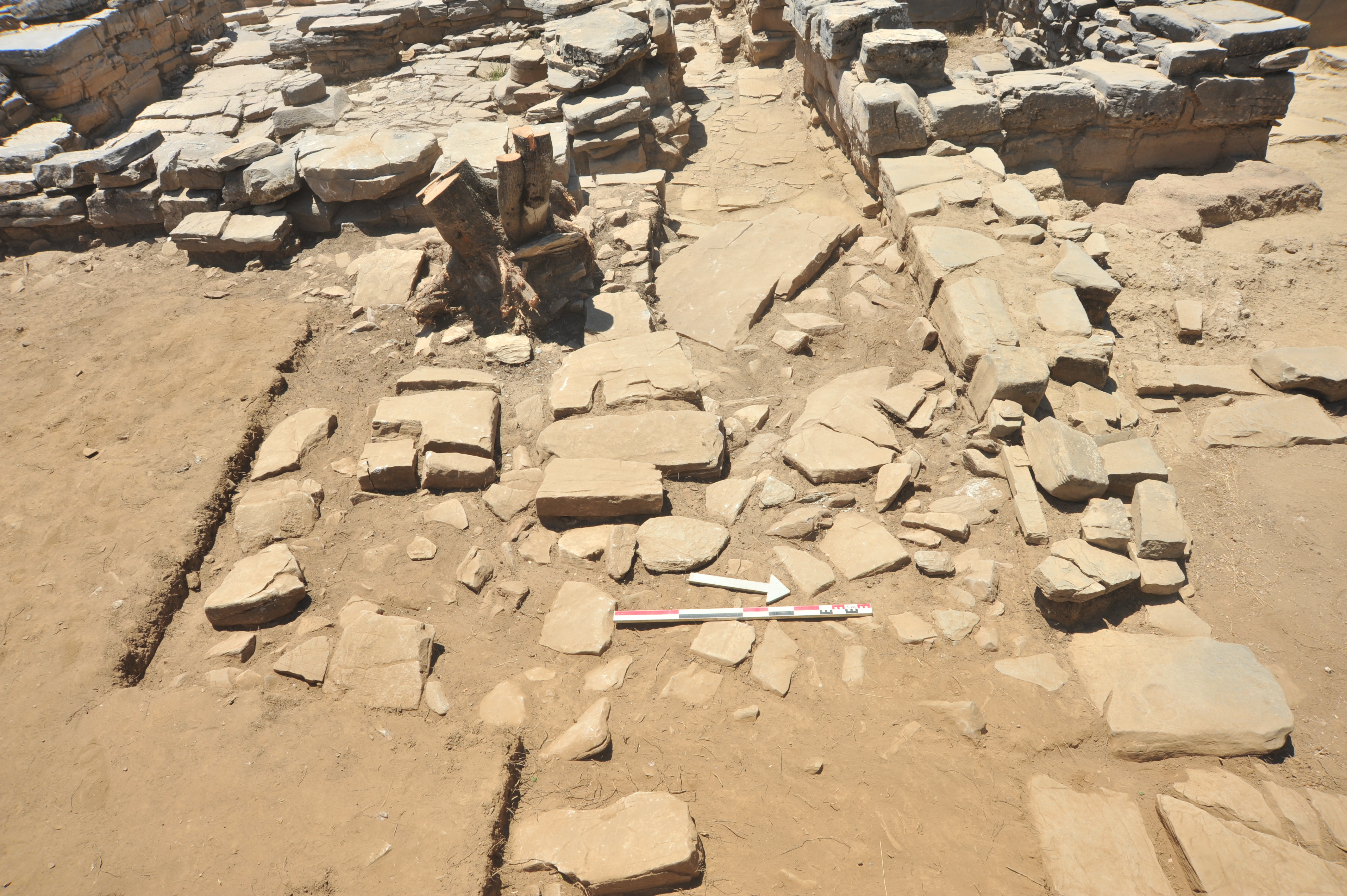 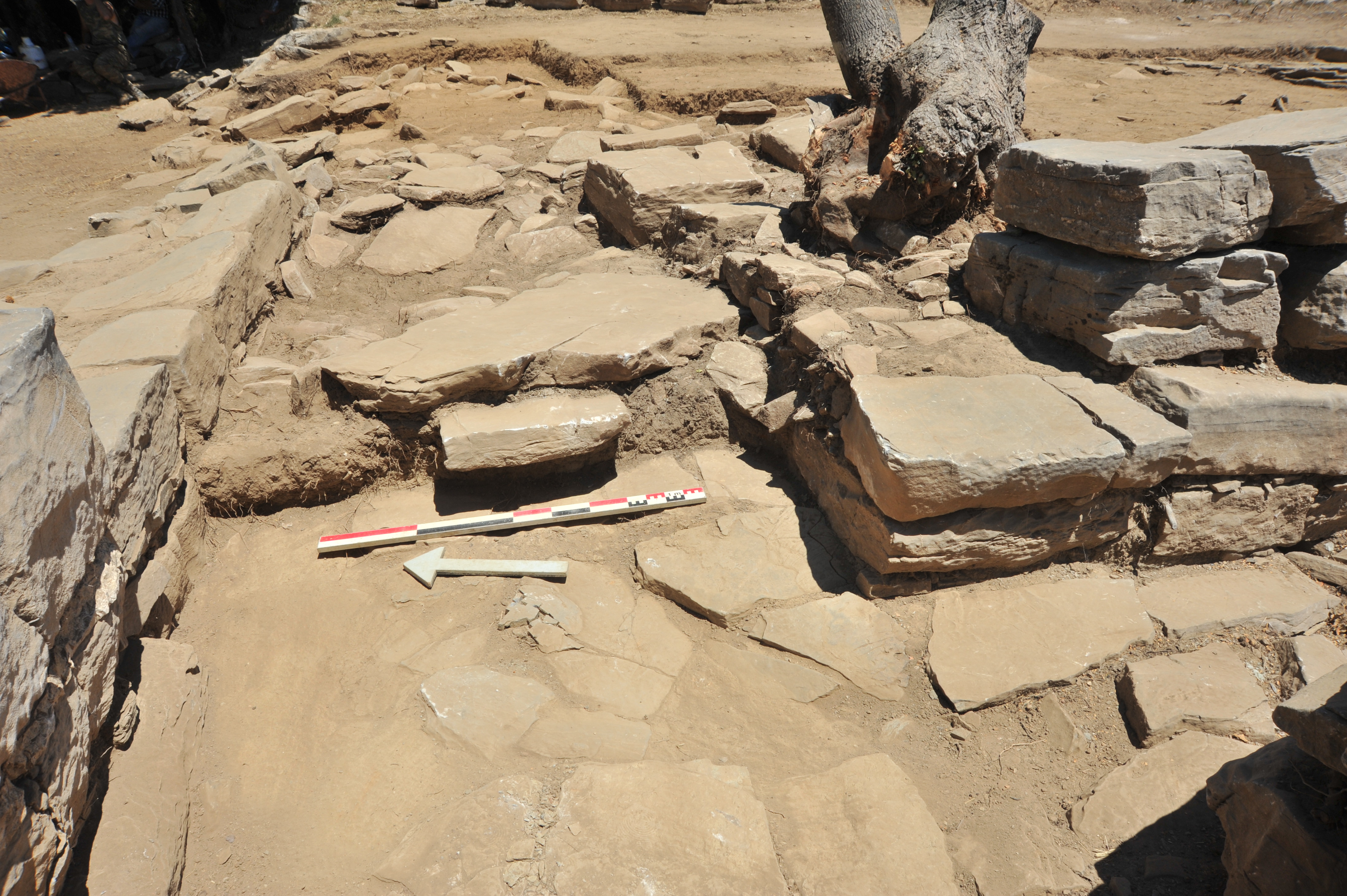 ROOM 38
In Room 38 some limestone slabs of the pavement of the ground floor came to light last week in the southern part of the room, in the area south of the central pillar. The excavation of the western part continued to a deeper level this week in order to investigate for the rest slabs of this area and indeed some parts of the pavement were unearthed (Fig.1, 2). The excavation of this layer was extended also in the area to the north of the pillar, where a well-preserved part of the pavement came to light (Fig.1). The layer excavated in the western part yielded some interesting small finds, among them a piece of rock crystal, a stone discoid pendant (Fig.3) and lentoid bead made of bone (Fig.4). 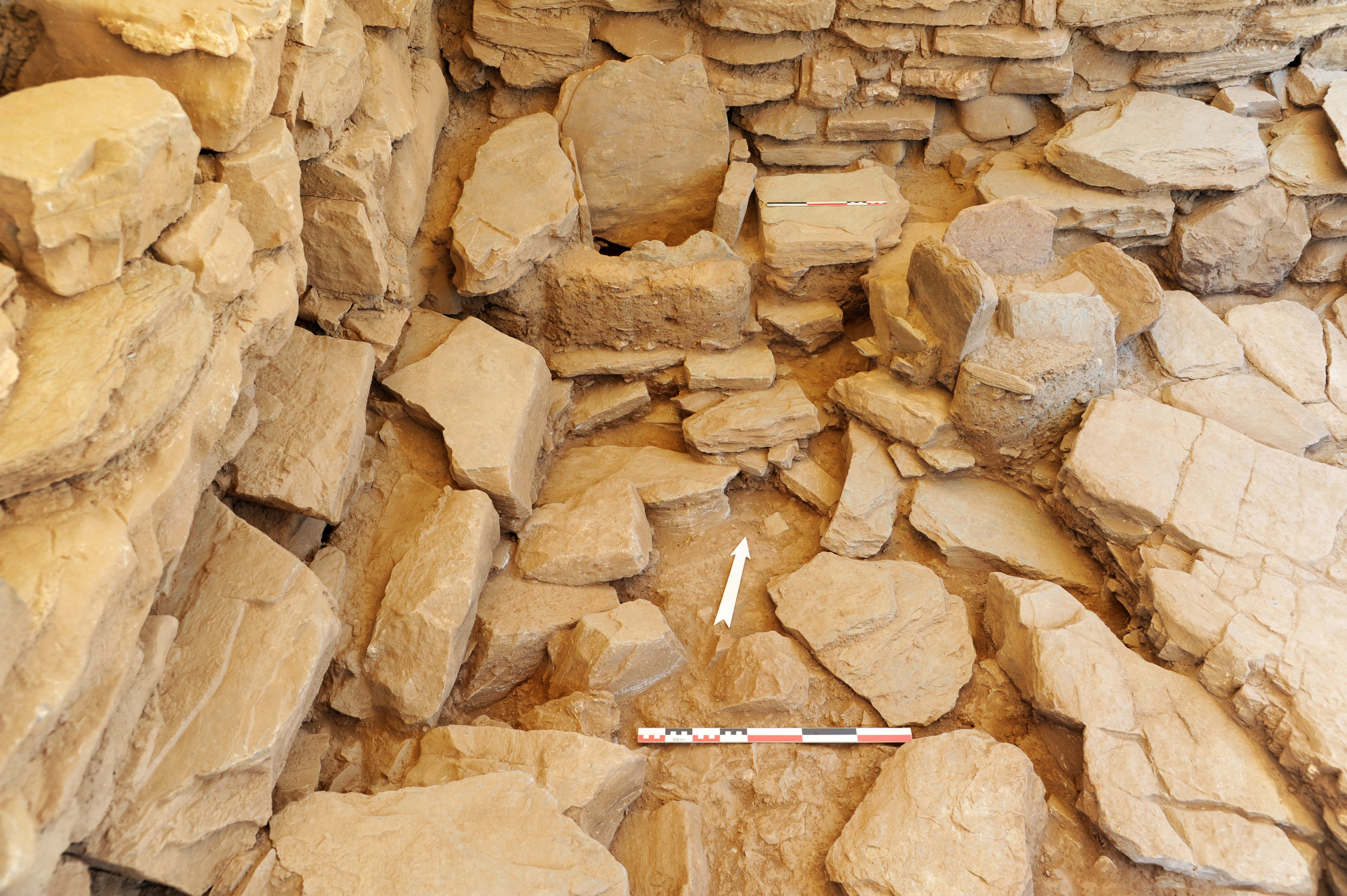 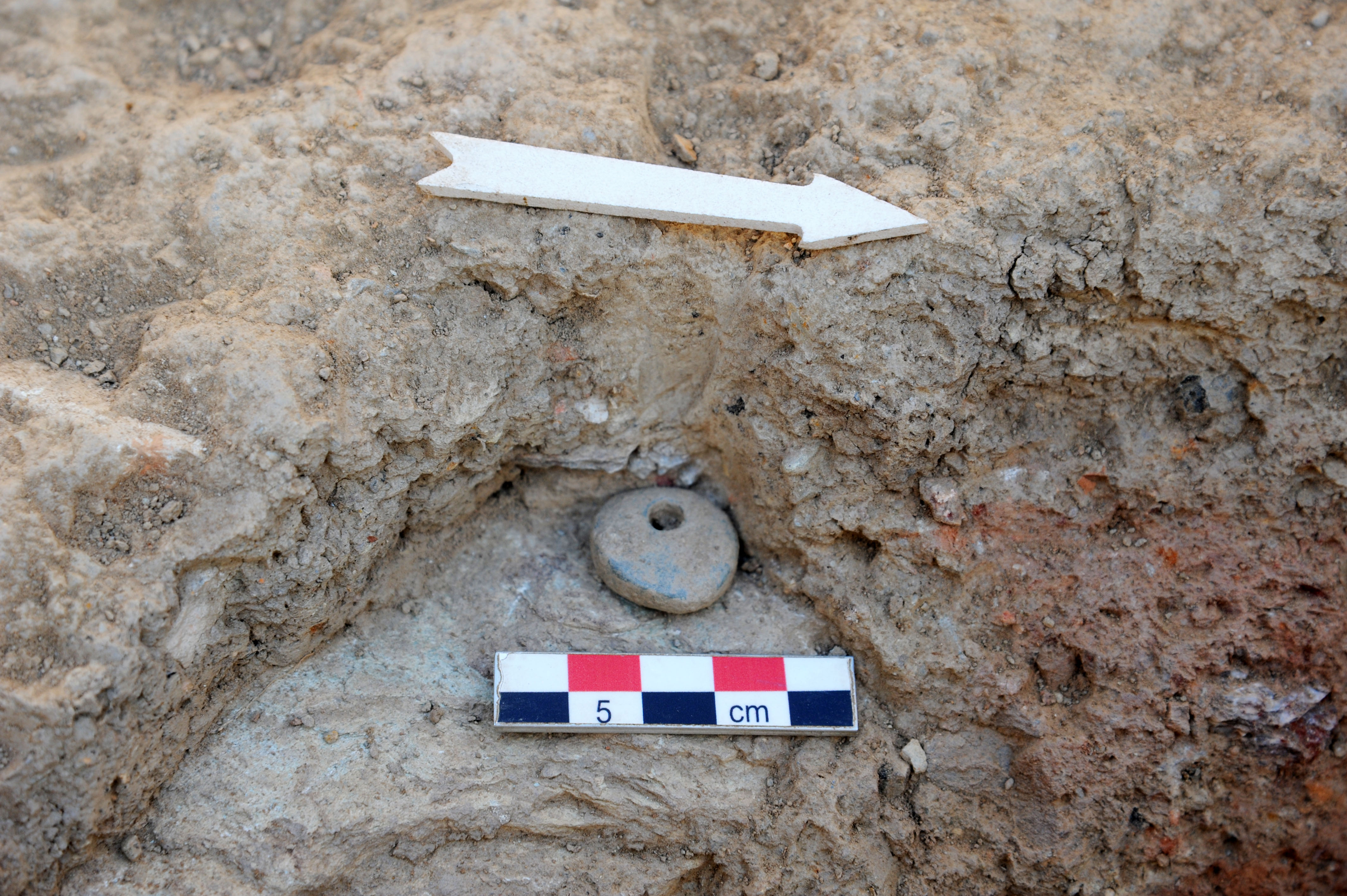 AREA 45B
This week the excavation continued in the western part of Area 45B, where it was discovered a part of shcist and limestone plack paved floor. Also the excavation was expanded in the south wall of Area 45A, which simultaneously constitutes the north wall of Area 48 (Fig.1). Small quantity of LM pottery was collected, as well as some carbon parts, a part of an unidentified quartz object and a part from a glazed vessel of modern times.

ROOM 47
This week excavation continues in two of three rooms which included in complex of Rooms 47.
In Room 47 C the natural rock which covers the main part on room surface has been revealed. It is important to refer that the floor of the room was wooden upon a natural rock and burned after destruction of the Building. The pottery which comes to light along with bulls and deer’s bones gives us information not only about the oldest period of the building but also about ceremonies with special meals. (Fig.1)
The Room 47 B which is located in the southern side of three rooms presents interesting elements regarding architectonical structure and use of the room. The finds collected this week included a barbotine vase, egg cups and processed quartz (Fig.2). These finds are useful to estimate the importance and the dating of the room. (Fig.3) 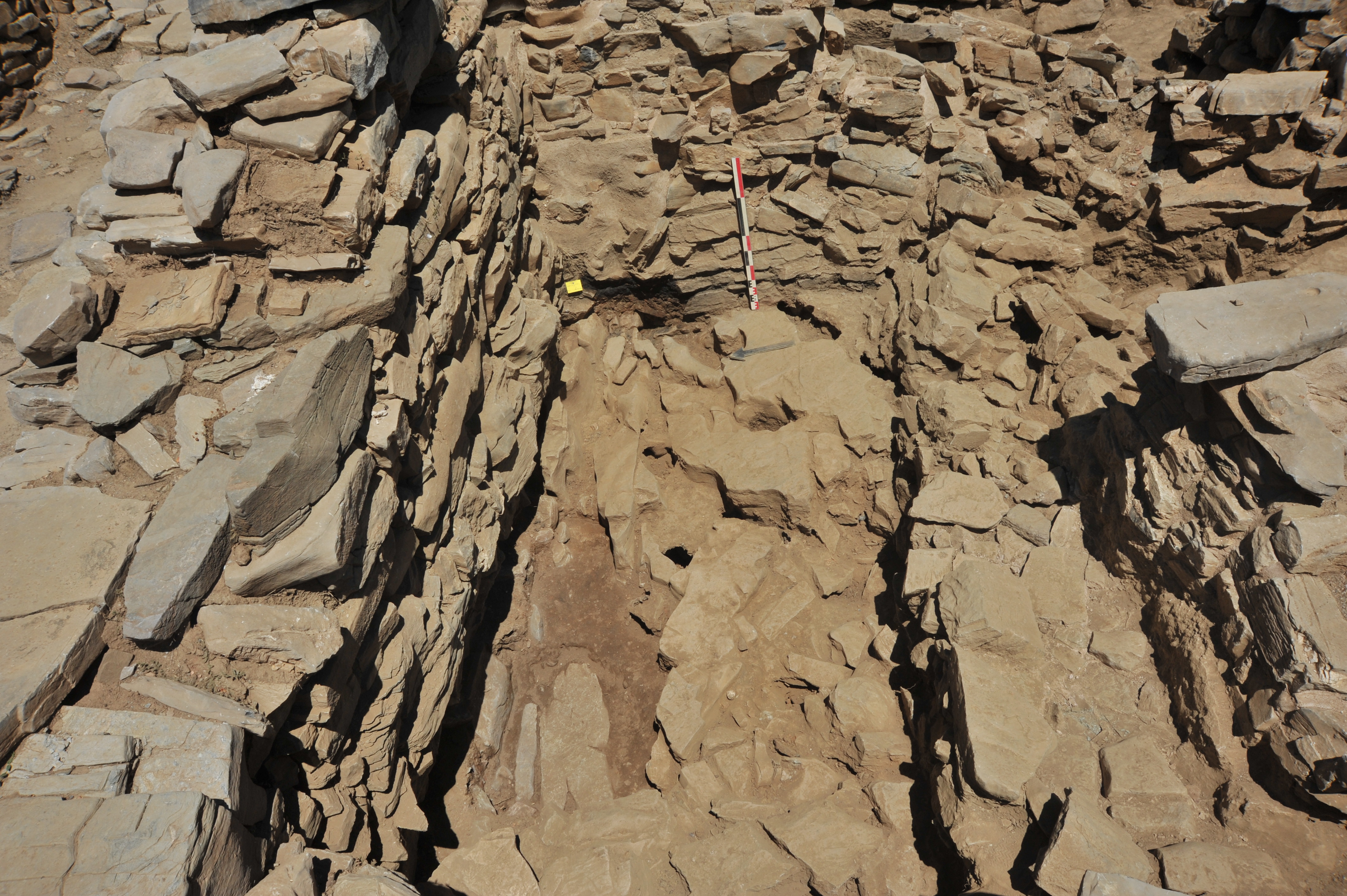 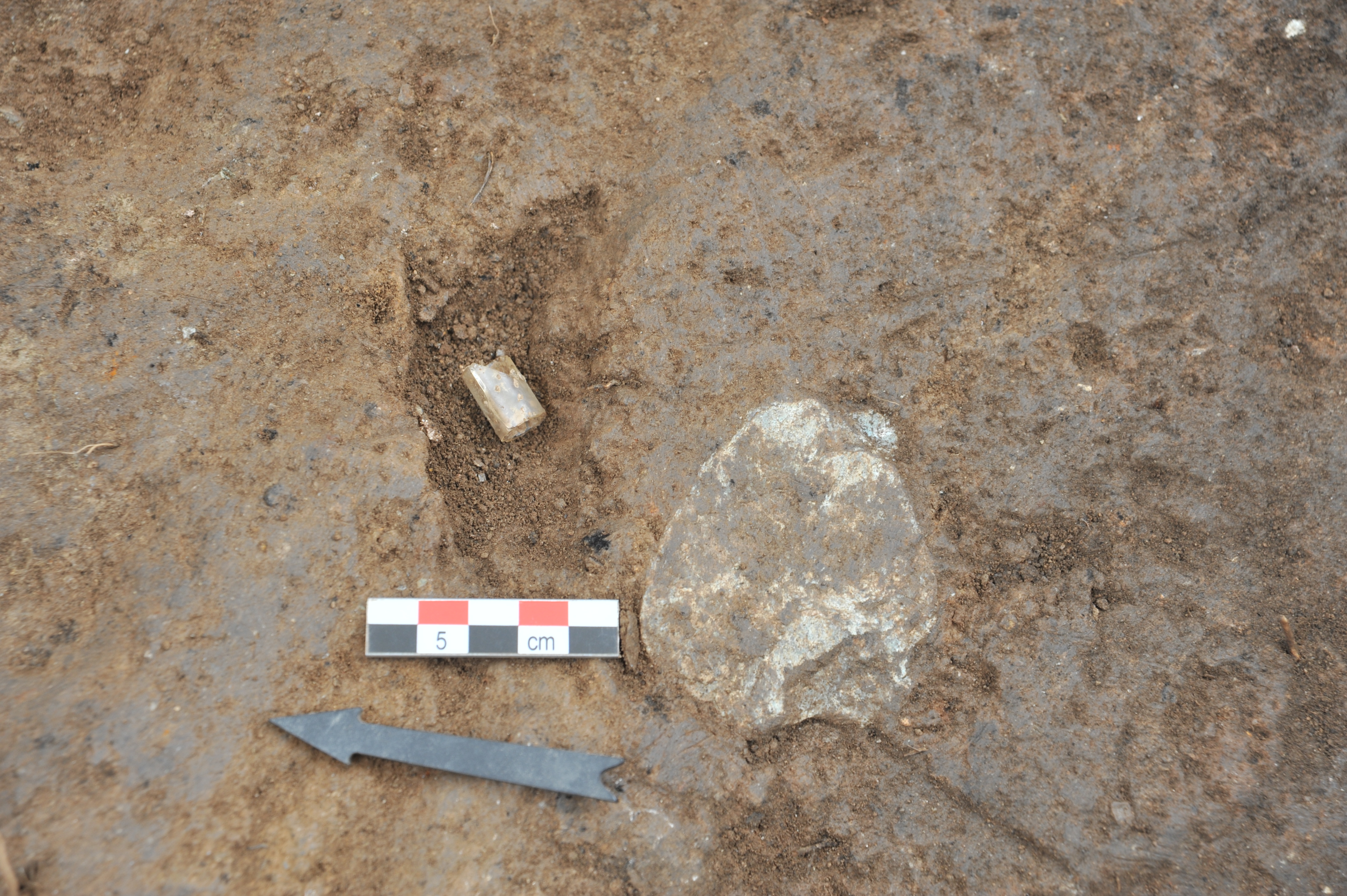 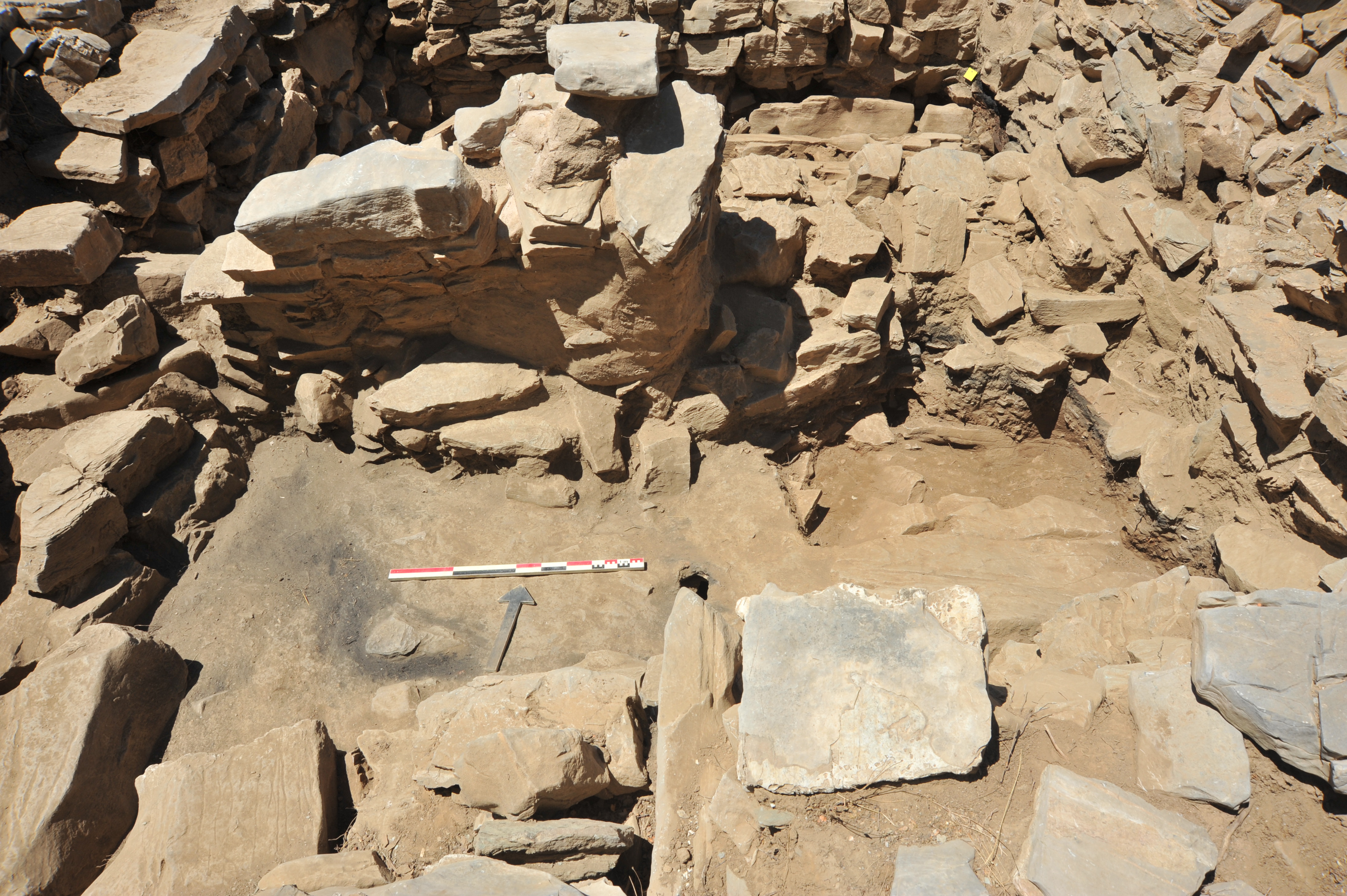 AREA 57A
This week the excavation continued in the external side of the north wall of the Area 57A. In the NE a vertical wall with direction S to N was discovered (Fig.1). The wall is 1.48 m. in length and 0.94 m. in width. The whole area was plenty of ceramic parts from different vessels in shape and dimensions like coarse wares, small conical cups, foot of cooking pots, and part of an egg cup. AREA WEST OF THE ROOM 59-AREA 60
The excavation of the area west of Room 59 is continued with the removal of two more layers, containing small and medium sized fallen stones and schists at the east part of the area. Also, at the northeast part of the area large fallen stones revealed. A lot of pottery fineware and courseware along with animal bones, handless cups, pieces of a pithos and a small amygdaloid artifact of well worked dark brown stone with a hole (Fig.1) were found.
The area outside of west wall of Area 60 (Fig.2) is investigated with the removal of three layers that contain small fallen stones. A large amount of fineware and courseware pottery, a spherical cup (Fig.3), a handless cup and animal bones have been found. 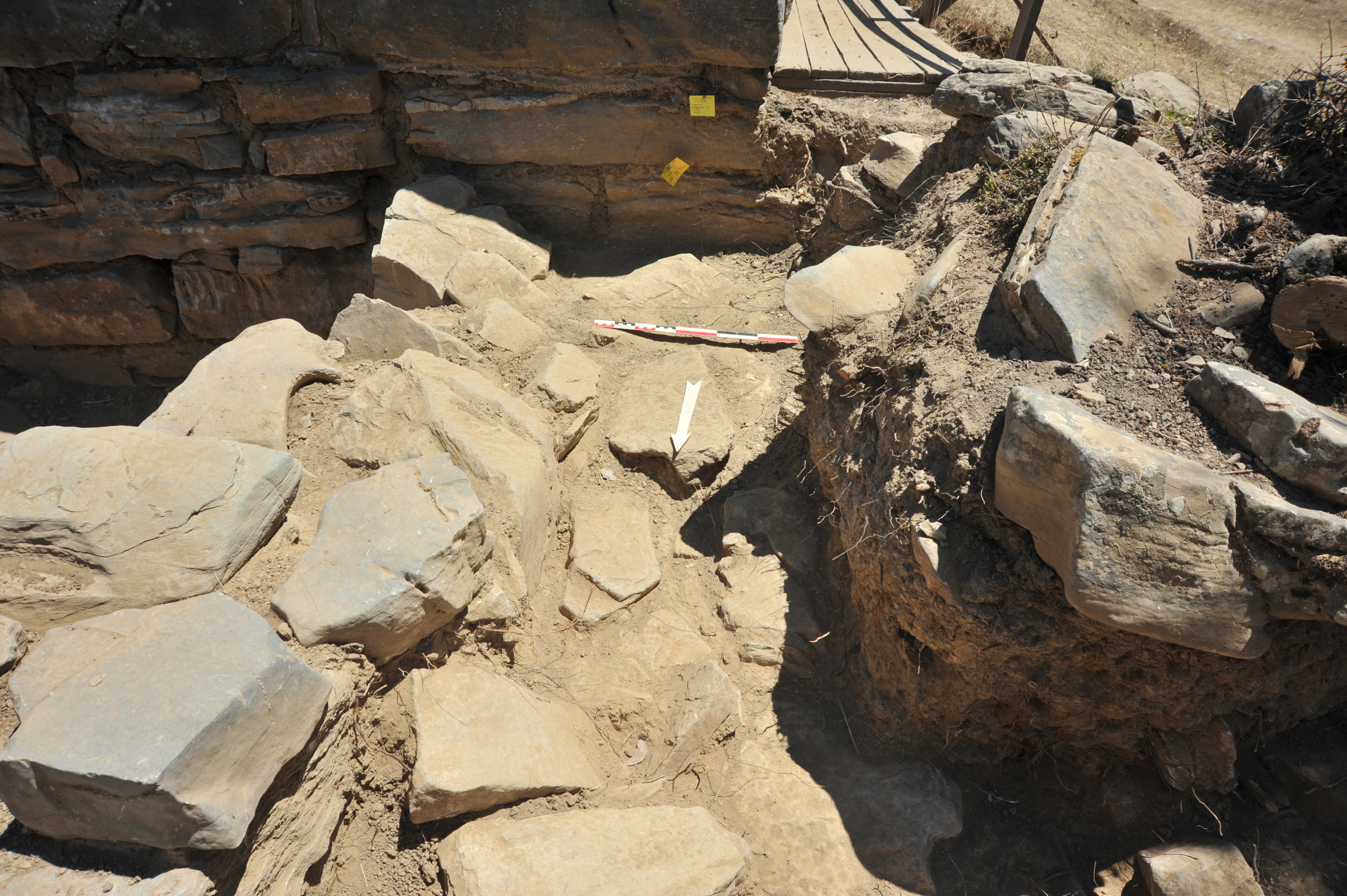 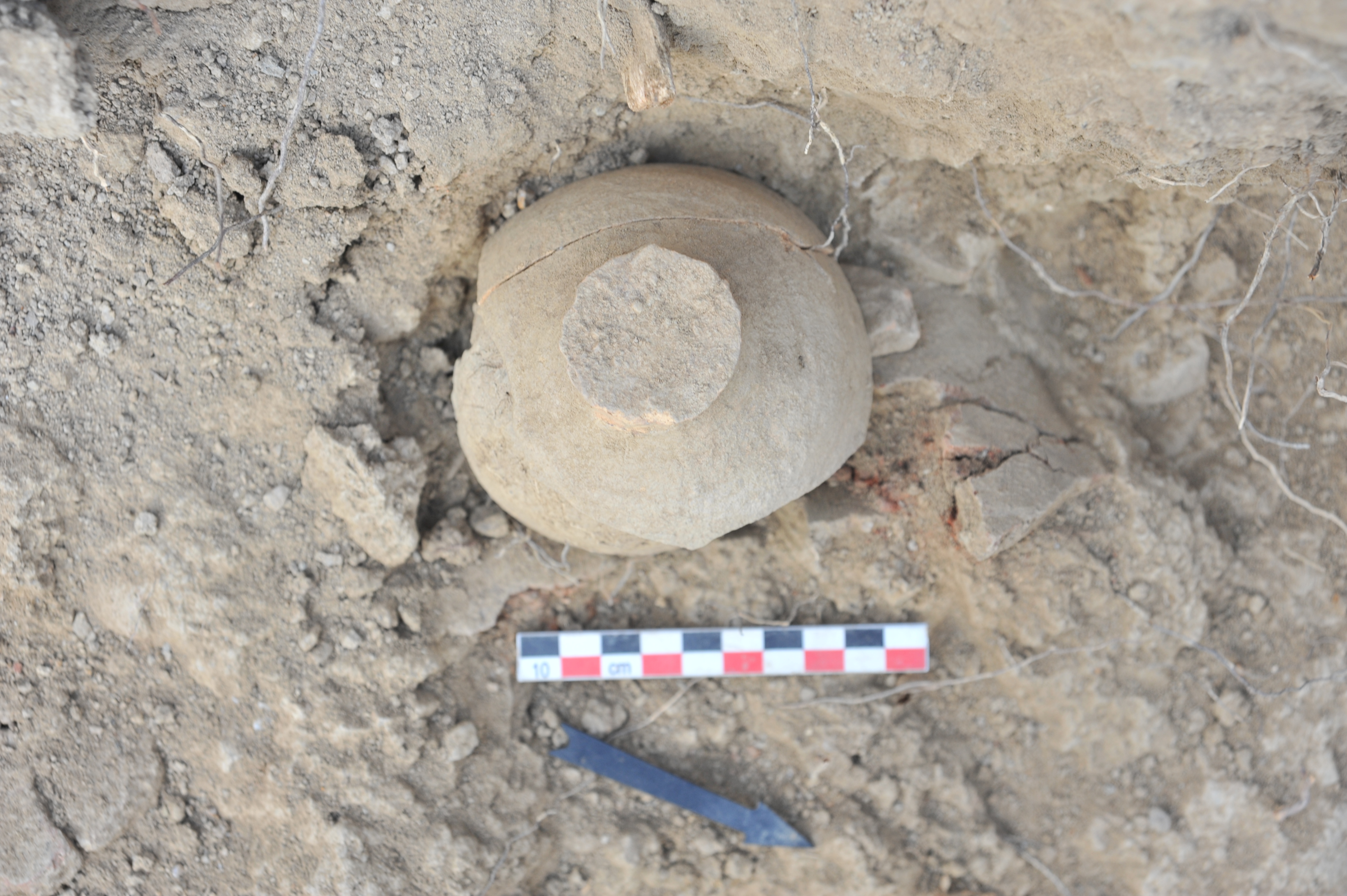