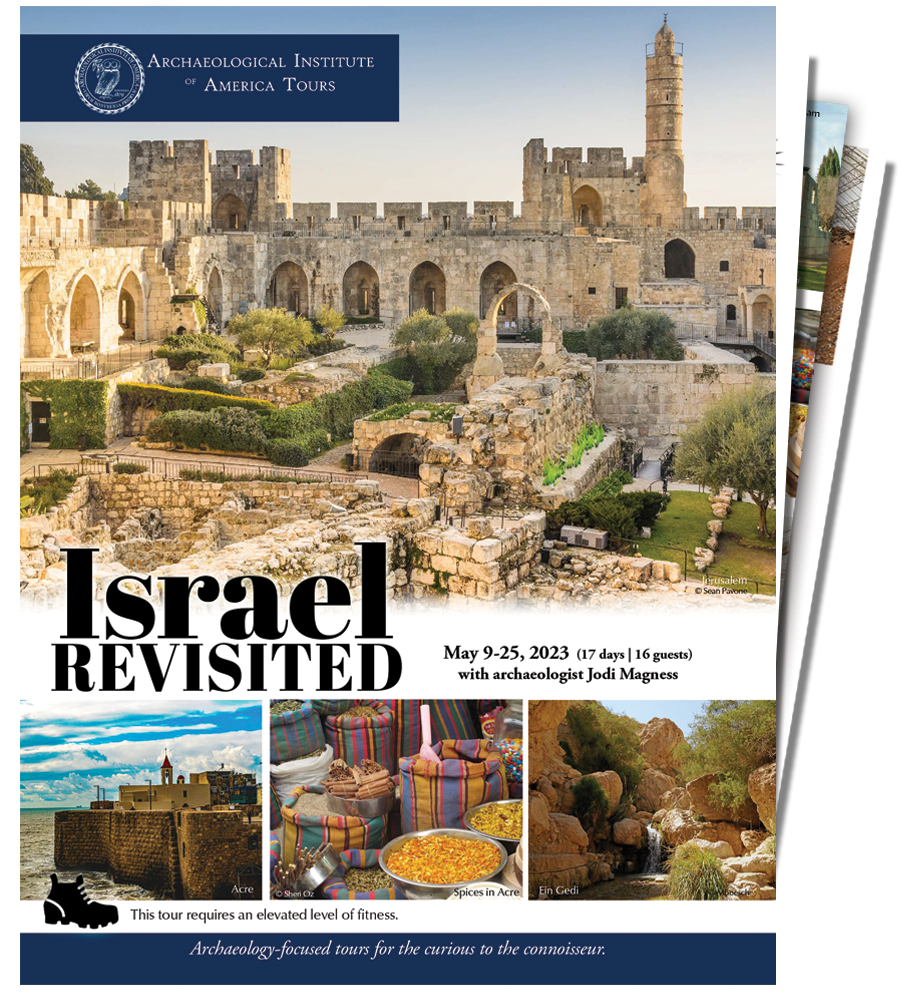 Join acclaimed AIA lecturer and archaeologist Jodi Magness and revisit Israel on this active, small-group adventure to explore ancient and natural sites, many of which are off the beaten path.

This is a more strenuous itinerary than our other Israel tour, Treasures of the Holy Land, as it includes several hikes in nature reserves to see wildlife and geological wonders in addition to visiting a variety of archaeological and cultural sites. Estimated distances and difficulty of the hikes are indicated in the itinerary, but every day with group activities will involve walking, whether around archaeological sites or through towns and cities.

End each day at a 5-star hotel/resort, where you can rest your weary but fulfilled traveler’s head and perhaps refresh yourself in their luxury pools or spas.

Wednesday, May 10: Arrive in Tel Aviv | Private transfer to hotel

Wednesday, May 10: Arrive in Tel Aviv | Private transfer to hotel
Upon arrival at Ben Gurion Airport (TLV), you will be met and transferred to our hotel adjacent to the marina on Tel Aviv’s waterfront. Enjoy the balance of the day at leisure to relax, explore the city by foot, or perhaps stroll along the oceanside Shlomo Lahat Promenade. Overnight at the 5-star Carlton Hotel Tel Aviv.

Thursday, May 11: Acre (Akko) | Haifa | Welcome dinner
Today we visit the UNESCO World Heritage Site of the Old City of Acre with the capital of the medieval Crusader Kingdom of Jerusalem. For more than 200 years, this port city stood as a Christian stronghold against the Muslim armies, as well as a stop along the pilgrimage route from Europe to Jerusalem. The present-day city presents an exceptional example of an Ottoman walled town. Continue on to the Mediterranean city of Haifa. Check-in to our hotel and gather this evening for a welcome dinner. Overnight at the 5-star Dan Carmel Haifa hotel (deluxe bay view rooms). (B,L,D)

Friday, May 12: Kfar Bar’am | Tel Hazor National Park | Tze’elon Beach
Today we visit the ancient village of Kfar Bar’am, home to a partially-restored synagogue dating to approximately the 5th-6th century A.D. We then continue to Tel Hazor National Park to tour the ancient city and the tell, or mound, of the UNESCO World Heritage Site of Hazor. During the Middle Bronze Age (circa. 1750 B.C.) and the Israelite period (9th century B.C.), Hazor was the largest fortified city in the area. Enjoy a guided tour of the site, including Solomon’s gate, the Canaanite palace from the 13th century B.C., and the water system. View ancient relics recovered from excavations of the city at the museum in the nearby Kibbutz Ayelet HaShahar. Continue on to our hotel on Tze’elon Beach, on the eastern shore of the Sea of Galilee. Gather for dinner at our hotel. Overnight at the 5-star Setai Sea of Galilee Hotel (Hot Tub Villa) for four nights. (B,L,D)

Saturday, May 13: Tel Dan Nature Reserve | Banias Nature Reserve  | Tze’elon Beach
Moderate walk for 2 hours in Tel Dan and 2 hours in Banias Nature Reserve
Today we explore the Tel Dan Nature Reserve, which contains the remains of a 5,000-year-old city. Among the ancient treasures found at Tel Dan are the only surviving monumental temple complex, the world’s oldest-known gated archway, and a stone with an inscription about the House of David—the oldest inscription to mention King David. The original inscription is on display at the Israel Museum in Jerusalem. We stop for an independent lunch, then continue on to the Banias Nature Reserve located at the foot of Mount Hermon, north of Golan Heights. We will enjoy a moderate hike to the largest waterfall in Israel, and see the remains of a palace complex built by Agrippa II, Herod’s grandson. Return to Tze’elon Beach and gather for dinner at a local restaurant this evening. (B,D)

Sunday, May 14: Umm el-Kanatir | Qazrin | Tze’elon Beach
Walk for 1.5 hours with a moderate ascent/descent in Umm el-Kanatir
After breakfast, we drive to Umm el-Kanatir in the Golan Heights. Originally a Roman town, it later became one of the three dozen Jewish villages founded in the Golan Heights after Jews were banned from Jerusalem following their unsuccessful rebellion against the Romans in the 2nd century A.D. The residents built a magnificent synagogue in the 6th century A.D., which was destroyed along with the entire village during an earthquake in A.D. 749. Enjoy a walking tour to the village spring and the reconstructed synagogue. We next drive to the open-air museum at Qazrin, another of the Jewish villages founded in the Golan Heights. After an independent lunch we re-group for a tour through the restored village, with original ruins of the synagogue and its arched entrance, as well as restorations of several buildings with replicas of household tools, including a functioning wine press. Return to Tze’elon Beach and gather this evening for dinner at our hotel. (B,D)

Monday, May 15: Gamla Nature Reserve | Sea of Galilee boat ride | Tze’elon Beach
Hike for 3 to 4 hours in Gamla (one section of sharp ascent/descent)
This morning we hike in the Gamla Nature Reserve, home to numerous natural and archaeological wonders. Start out with the most challenging part of the hike, to visit the remains of the ancient city of Gamla as well as a Bronze Age field that contains 716 dolmens. Keep a lookout for griffon vultures, though with their ten-foot wingspan these birds should not be hard to spot. Linger in the cooling spray of Israel’s highest cascade, the 170-foot Gamla Waterfall. Enjoy a restful lunch, and then return to Tze’elon Beach for a boat ride on the Sea of Galilee (Lake Kinneret). Dinner is at a local restaurant this evening. (B,L,D)

Tuesday, May 16: Wadi Qelt | Museum of the Good Samaritan | Jerusalem
Walk for 1 hour with sharp ascent/descent in Wadi Qelt; modest attire
Today we head to Jerusalem. On the way, we spend some time exploring the Monastery of St. George of Choziba in Wadi Qelt, a valley in the eastern West Bank thought by some to be referenced in Psalm 23, “valley of the shadow of death.” The breathtaking monastery complex hangs from the side of one of the valley’s walls, and we cross a pedestrian bridge to reach it. Established during the Byzantine period, it has been destroyed and rebuilt several times, most recently by Greek monks at the end of the 19th century. We make one other stop on our drive to Jerusalem, at the Museum (Inn) of the Good Samaritan, an indoor/outdoor museum of ancient mosaics, some of which date back to the 4th century A.D. Enjoy dinner together in Jerusalem. Overnight at the 5-star Waldorf Astoria for four nights. (B,L,D)

Wednesday, May 17: Jerusalem: Mount Scopus, Israel Museum
We begin today with a walk on Mount Scopus, where we visit the burial cave of Nicanor and peruse the Hebrew University Institute of Archaeology’s collection. After lunch we spend the afternoon taking in the extensive collection of both ancient and modern art at the Israel Museum. Dinner and the evening are on your own in Jerusalem. (B,L)

Thursday, May 18: Jerusalem walking tour: St. Anne’s Church, Church of the Redeemer, Tower of David, Rockefeller Archaeological Museum
Walk approx. 2 miles in the Old City; modest attire
Today we visit three sites that reflect the multiple religions that call Jerusalem home. First, we take in St. Anne’s Church, currently a Roman Catholic church. Next, we explore the Lutheran Church of the Redeemer, which features an archaeological exhibition below its nave, and climb its tower for a splendid view of the Old City. Finally, we tour the Tower of David. Originally constructed during the Mamluk and Ottoman periods, it was repeatedly damaged during the Crusades. Take some time to explore the museum housed in the original citadel to learn about Jerusalem’s history from its beginnings to the current day. After an independent lunch we re-group to explore the Rockefeller Archaeological Museum, which houses thousands of artifacts arranged in chronological order. Dinner is on your own this evening. (B)

Friday, May 19: Jerusalem: Southern Wall Excavations, PM at leisure
After breakfast we tour the excavations on the southwest side of Temple Mount. View the ongoing work itself, then learn more about the finds in the Southern Wall Museum. After lunch, the rest of the day is yours to explore the city on your own. (B,L)

Saturday, May 20: Ein Gedi National Park | Ein Boqeq
Hike for 2 to 3 hours with a sharp slope in Ein Gedi
This morning, we leave the city behind and head to the lush oasis of Ein Gedi. We hike through this national park, seeking the resident ibex and birds of prey. Walk along the sparkling Nahal David, or David’s stream; visit the Chalcolithic temple overlooking the oasis; and see an excavated ancient synagogue with a perfectly preserved mosaic floor featuring a central square of exotic birds surrounded by a precise pattern of intersecting circles. After the hike we continue on to our hotel in Ein Boqeq, on the Dead Sea, where we have a late check in (due to Shabbat) and then gather for dinner. Overnight at the 5-star Isrotel Dead Sea Resort & Spa. (B,L,D)

Sunday, May 21: Sde Boker | Ein Avdat National Park | Mitzpe Ramon
Moderate hike for 1 hour in Ein Avdat
This morning we head into the desert of southern Israel. We make a brief stop in Sde Boker, the retirement town of the country’s first prime minister, David Ben-Gurion, and today the location of his tomb. Hike in Ein Avdat National Park, a vast canyon with a spring-fed oasis on the valley floor. Gaze up at the sheer walls to see caves where monks once resided. Continue on to our hotel in Mitzpe Ramon, where we gather for dinner tonight. Overnight at the 5-star Beresheet Hotel (Desert View with pool or Crater Top with balcony) for two nights. (B,L,D)

Monday, May 22: Nitzana
We spend the day in the desert town of Nitzana (formerly Nessana). Explore what remains of the various peoples who have lived here, from the Byzantine church to ancient petroglyphs. Spend the afternoon enjoying the hospitality of the Negev Bedouins. Return to our hotel in Mitzpe Ramon, where we gather for dinner tonight. (B,L,D)

Tuesday, May 23: Yotvata | Timna | Eilat | Farewell dinner
Today we journey to the Red Sea. On the way, we explore the Late Roman fort at Yotvata and then pause again to take in the multihued sands of the Timna Valley. The water and wind have carved arches, hoodoos (tall, thin spires of rock), and other unique formations in the sandstone cliffs of this region. We also see rock drawings and ruins of ancient Egyptian shrines. Continue on to our hotel in the resort town of Eilat, where we gather this evening for a farewell dinner. Overnight at the 5-star Royal Beach Eilat hotel (New Bellavista room) for two nights. (B,L,D)

Wednesday, May 24: At leisure
Today is a day at leisure to enjoy the hotel’s amenities. Independent options include a visit to the underwater observatory or snorkeling along the reef. (B)