Israel: Treasures of the Holy Land 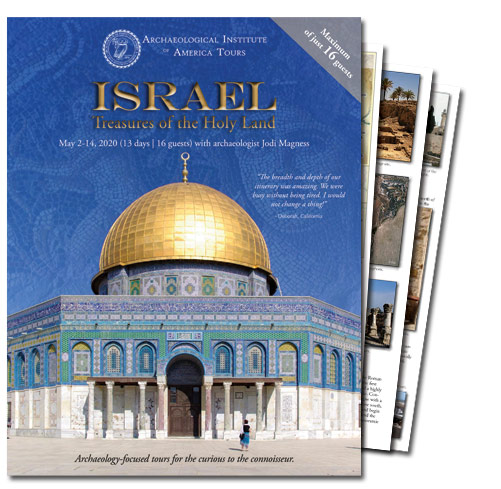 This tour has been canceled for 2020. The 2021 departure of this tour is in the planning stages, to be contacted when the tour becomes available, please call 800-748-6262 or email aia@studytours.org.

Discover the kaleidoscope of Israel’s archaeological riches in springtime. Highlights include iconic ancient and religious sites, including five that are inscribed on UNESCO’s World Heritage list: the spectacular, tragic fortress of King Herod at Masada; the Biblical Tel (settlement mound) of Megiddo; a view of Haifa’s Bahá’í Gardens from Mt. Carmel; the Jewish necropolis of Beit Shearim; and Bethlehem, with its 4th-century Church of the Nativity. Also spend six nights based in Jerusalem, exploring in-depth its archaeological sites, outstanding museums, and major Christian, Jewish, and Islamic holy places; and explore the impressive ancient trading port of Caesarea Maritima as well as Qumran, overlooking the Dead Sea, where the Dead Sea Scrolls were hidden for nearly 2,000 years. Limited to a maximum of 15 participants.

With fewer than 10 participants, a small group surcharge may be added.  Single room supplement will be charged when requested or required.

Entering the Old City of Jerusalem via the Damascus Gate. Image © Biosketch.

Station IX of the Via Dolorosa, Jerusalem. Image © Berthold Werner/commons.wikimedia.org.

This tour has been cancelled for 2020. The 2021 departure of this tour is in the planning stages, to be contacted when the tour becomes available, please call 800-748-6262 or email aia@studytours.org.

Saturday, May 9: Jerusalem: East Jerusalem to the Old City | PM at leisure

Sunday, May 10: Jerusalem: City of David and Southern Steps | PM at leisure

Monday, May 11: Jerusalem: Old City walk along the Cardo | PM at leisure

This tour has been cancelled for 2020. The 2021 departure of this tour is in the planning stages, to be contacted when the tour becomes available, please call 800-748-6262 or email aia@studytours.org.

Saturday, May 2, 2020: Depart Home
Today board your international flight for Israel.

Sunday, May 3: Arrive Tel Aviv, ISRAEL
Arrive at Ben Gurion Airport (TLV), located just outside of the dynamic, seaside city of Tel Aviv, where you will be met by a local representative, helped through customs, and transferred to our luxurious hotel. Overnight at the 5-star Carlton Hotel (deluxe sea view rooms). (D)

Monday, May 4: Caesarea Maritima | Haifa | Welcome dinner
After breakfast depart Tel Aviv along the Mediterranean coastal road to the major ancient trading port of Caesarea Maritima. Originally a Phoenician settlement, it was re-built in the 1st century B.C. by Herod the Great as a naval base, with an impressive artificial harbor. Visit the ruins of the theater, Herod’s palace, hippodrome, Crusader city, and aqueduct. Continue north along the coast to Haifa for a magnificent view of Galilee from Mt. Carmel, including a view of the Bahá’í Gardens, a religious site of the Bahá’í faith on UNESCO’s list of World Heritage sites. Check into our luxurious hotel, freshen up, and gather for a welcome dinner. Overnight for two nights at the 5-star Dan Carmel Haifa (deluxe bay view rooms). (B,L,D)

Tuesday, May 5: Megiddo | Beit Shearim | Haifa
Begin the day with a visit to Megiddo, a Biblical tel (settlement mound) inscribed on UNESCO’s list of World Heritage sites. Excavations at Megiddo, which was in a very strategic location, have revealed evidence of up to 27 layers of habitation from between 4,000 B.C. and 450 B.C. Continue on to Beit Shearim, an ancient city and Jewish necropolis that also served as the seat of the Sanhedrin (official Jewish council under the Romans) in the 2nd century A.D., where there are the ruins of a 2nd-century A.D. synagogue and 31 catacombs, whose sarcophagi bear inscriptions in Hebrew, Aramaic, and Greek. Return to our hotel in Haifa in time for dinner. (B,D)

Wednesday, May 6: Sepphoris | Magdala | Tzaelon Beach
Continue our tour of Galilee with a visit to Sepphoris (Zippori), the capital of Galilee in the 1st century A.D., with restored buildings and beautiful mosaics including the “Mona Lisa of the Galilee.” Cross Galilee to Lake Kinnereth (the Sea of Galilee) and visit the site of Magdala, hometown of Mary Magdalene, where a 1st-century town has been discovered, including the only known 1st-century synagogue on the Sea of Galilee. Continue on to Tzaelon Beach, on the eastern shore of Lake Kinnereth, where we check-in to our luxurious hotel and have dinner. Overnight for two nights at the 5-star Setai Sea of Galilee Hotel. (B,D)

Thursday, May 7: Tabgha | Capernaum | Lake Kinnereth | Hamat Tiberias National Park
This morning we visit Tabgha (“The Seven Springs”), where a church commemorates the miracle of the multiplication of the loaves and fishes, believed to have taken place on this spot. Continue on to nearby Capernaum, the center of Jesus’ ministry in Galilee. We will see a monumental ancient synagogue in the village and a nearby church built over the site venerated as the house of St. Peter. Enjoy a boat ride on Lake Kinnereth (the Sea of Galilee), followed by lunch. This afternoon, visit Hamat Tiberias National Park, overlooking the city of Tiberias, where the remains of a 4th-century A.D. synagogue include a beautiful zodiac mosaic. Dinner is at our hotel this evening. (B,L,D)

Friday, May 8: Beit Shean | Beit Alpha | Jerusalem
Begin the day with a visit to Beit Shean (Roman Scythopolis), one of the cities of the Roman Decapolis (a league of Greek cities formed after the Roman conquest in the first century B.C.). Extensive excavations at the site have revealed a highly developed Roman city that was destroyed by an earthquake. Continue to Beit Alpha, the site of an ancient synagogue with a beautiful and unusual mosaic floor. Drive south, following the Jordan River, and begin the ascent to Jerusalem. End the day with a magnificent panoramic view of Jerusalem, a city sacred to the three Abrahamic faiths. Check in to our luxurious hotel, where we have dinner this evening. Overnight for six nights at the 5-star Waldorf Astoria. (B,L,D)

Saturday, May 9: Jerusalem: East Jerusalem to The Old City | PM at leisure
Begin today with a morning visit to the W. F. Albright Institute of Archaeological Research, housed in an historic building in East Jerusalem, north of the Old City. From there we will set out on a walking tour, following Jerusalem’s “Third Wall” from the grounds of the Albright Institute south to the Damascus Gate, where we enter the Old City. Walk along the Via Dolorosa to the Church of the Sisters of Zion and the Church of the Holy Sepulchre, the holiest site in the Christian world. After lunch, the balance of the day is at leisure. (B,L)

Sunday, May 10:  Jerusalem: City of David and Southern Steps | PM at leisure
Spend the morning exploring the origins of Jerusalem in the “City of David” area – the original Jebusite city chosen by King David as the capital of Israel. The City of David is today an archaeological park that includes the ruins of large houses and a defensive tower. Also visit the “Southern Steps,” at the base of the steps leading up to the Temple Mount through the Hulda Gate. After lunch, the balance of the day is at leisure. (B,L)

Monday, May 11: Jerusalem: Old City walk along the Cardo | PM at leisure
Begin the day by entering the Old City of Jerusalem through Jaffa Gate, by David’s citadel (the area of Herod’s palace). Walk along the Cardo, the main street of Roman Jerusalem. Visit the excavated homes of the wealthy priestly families of the Temple, and visit the remains of a home that burned as the Temple itself was destroyed. After lunch, the balance of the day is at leisure. (B,L)

Tuesday, May 12: Masada | Dead Sea | Qumran | Jerusalem
Today we depart Jerusalem and drive to the UNESCO World Heritage site of Masada. Built by Herod as a fortified palace, Masada later was the site of a famous “last stand” by almost 1,000 Jews, following the Roman conquest of Jerusalem in A.D. 70. At a resort in Ein Boqeq, south of Masada, we will have lunch and you may take a dip, if you wish, in the Dead Sea—the lowest point on Earth. End the day at Qumran, where the famous Dead Sea Scrolls were hidden for nearly 2,000 years, and then return to Jerusalem. Dinner is on your own this evening. (B,L)

Wednesday, May 13: Israel Museum | Mahane Yehuda | Bethlehem | Jerusalem | Farewell dinner
Today visit the Israel Museum (including the Shrine of the Book, which houses some of the Dead Sea Scrolls) with its very large scale model of Jerusalem, depicting the city at the time of the Second Temple. Continue to the center of town to visit Mahane Yehuda, an open-air market where you can view (and sample) fresh produce and spices. After lunch we visit Bethlehem, with its Church (Basilica) of the Nativity—the world’s oldest continuously operating church, established in A.D. 326, and today a UNESCO World Heritage site—and St. Catherine’s Church next door. Return to our hotel, and gather for a farewell dinner this evening. (B,L,D)