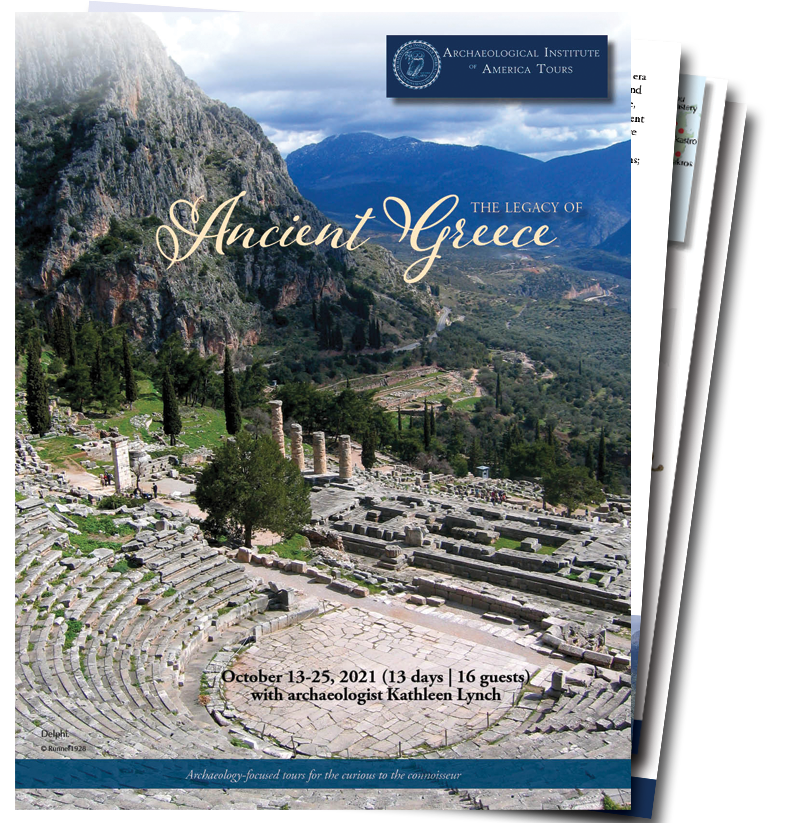 Experience the glories of Greece, from the Bronze Age to the Classical era and beyond, amid the variety of springtime landscapes of the mainland and the Peloponnese peninsula. This is a superb opportunity to ignite, or reignite, your passion for the wonders of Greek archaeology, art, and ancient history and to witness how integral mythology, religion, drama, and literature are to their understanding.

Single room supplement will be charged when requested or required (limited availability). With fewer than 9 participants, a small group surcharge may be added.

This tour itinerary will also have a May 2022 departure. Contact us to be notified when those details are available.

A private departure similar to this itinerary is available. Click here for more information.

Erechtheum, Acropolis - AIA Tours: The Legacy of Ancient Greece travel with the AIA

Thursday, October 14: Arrive in Athens | Private transfer to hotel | Orientation Meeting
Upon arrival at Athens’ Eleftherios Venizelos International Airport (ATH), you are met for a private transfer to our hotel in the city center. The afternoon is at leisure so that you may settle in, relax and enjoy an independent dinner before or after we gather this evening for an orientation meeting. Overnight at the 5-star Capital M Gallery for three nights.

Saturday, October 16: Athens – Agora, Kerameikos, National Archaeological Museum
This morning’s walking tour begins with the ancient Agora, the marketplace that was the center of ancient Athens’ economic, social, and political life, to stroll its paths to the Temple of Hephaestus and visit the Agora Museum, housed in the reconstructed Stoa of Attalos. Continue on to the Kerameikos, which was the city’s cemetery from the 12th century B.C. through the 6th century A.D. and is something of an urban oasis today. It is populated by marble stelae (grave markers), many of which are carved with portraits. After lunch we explore the National Archaeological Museum, which contains the richest collection of Greek antiquities in the world, including Neolithic, Cycladic, and Mycenaean artifacts. Return to our hotel for an evening at leisure. (B,L)

Sunday, October 17: Eleusis | Corinth | Nafplion
Set out from Athens for the small site of Eleusis, center of the ancient mystery cult called the Eleusinian Mysteries. At Eleusis, where we find the Sanctuary of Demeter, secret religious rites took place based on Hades’ seasonal abduction and return of Persephone to her mother, Demeter. Drive to Nafplion, stopping along the way to visit ancient Corinth, where we see the 6th-century B.C. Doric Temple of Apollo, the 1st-century A.D. Roman Odeon, and the site museum. Upon arrival in Nafplion we check-in to our hotel and get settled. Gather for dinner this evening. Overnight at the 4-star Ippoliti Hotel for two nights. (B,L,D)

Monday, October 18: Mycenae | Winery lunch | Epidaurus | Nafplion
En route to Mycenae we drive past Tiryns for a view of its impressive Cyclopean walls. Tiryns and Mycenae are together a UNESCO World Heritage Site. At Mycenae, we start with a visit to the Treasury of Atreus, a well-preserved tholos (beehive-shaped) tomb, and then pass through the celebrated Lion Gate into the ruins of the fortress-palace of legendary Agamemnon and Clytemnestra. Also explore the wonderful site museum. After lunch at a local winery, we visit the site of Epidaurus, an ancient sanctuary that was dedicated to Asclepius, the god of medicine, and today is a UNESCO World Heritage Site. Admire the well-preserved, 4th-century B.C. theater with its extraordinary acoustics, and visit the small site museum with ancient medical instruments. Return to Nafplion for an evening at leisure. (B,L)

Tuesday, October 19: Nemea | Stymphalia | Dimitsana
Depart Nafplion for Nemea, site of the Sanctuary of Zeus, where games of the Pan-Hellenic festival were celebrated from the 6th to 2nd centuries B.C. and which is today set in a public garden. After a visit to the small site museum we venture to the area of Lake Stymphalia, the largest mountain lake on the Peloponnese peninsula. Visit the acropolis of ancient Stymphalos and the 13th-century Cistercian abbey of Zaraka. After lunch we drive across the mountains to our hotel in the picturesque medieval village of Dimitsana. Gather for dinner tonight in a local restaurant. Overnight at the 4-star En Dimitsani Guesthouse. (B,L,D)

Wednesday, October 20: Bassae | Olympia
This morning we drive to the scenic UNESCO World Heritage Site of Bassae, whose 5th-century B.C. Temple of Apollo Epicurius is one of the best preserved in Greece. After lunch, we drive on to Olympia, where the balance of the day is at leisure. Overnight at the 4-star Arty Grand for two nights. (B,L)

Thursday, October 21: Olympia | Cooking class
Spend the day at the Pan-Hellenic sanctuary of Olympia, where the Olympic Games originated in 776 B.C. and were held every four years until the 4th century A.D. This extensive site, which is today a UNESCO World Heritage Site, includes the original stadium, the ruins of the immense 5th-century Doric Temple of Zeus, and the well-preserved 6th-century Doric Temple of Hera, plus we will visit the excellent site museum. Lunch and the balance of the afternoon are at leisure. This evening we learn to prepare traditional Greek food in a hands-on cooking class, the results of which will be our dinner this evening. (B,D)

Friday, October 22: Ferry to the mainland | Galaxidi | Delphi | Arachova
We drive to the northern Peloponnese to board a ferry and cross the Gulf of Corinth to mainland Greece, with a view en route of the Rio-Antirrio bridge, one of the world’s longest multi-span, cable-stayed bridges. After lunch in Galaxidi, overlooking the Gulf of Corinth, we drive to Delphi, a UNESCO World Heritage Site spectacularly situated on the slope of Mount Parnassus. This was the most celebrated oracle in antiquity, believed by the ancient Greeks to be the center of the Earth. We walk up the slope, along the Sacred Way, past monuments and treasuries to the theater and up even farther to the stadium where the Pythian Games were held. Check-in to our hotel in the mountain town of Arachova, settle in, and gather for dinner. Overnight at the 4-star Aegli Arachova for two nights. (B,L,D)

Saturday, October 23: Delphi
We return to Delphi this morning to explore its Archaeological Museum, whose excellent collection includes the celebrated bronze Charioteer statue and a colossal marble group of three dancing women. After lunch the balance of the day is at leisure, perhaps to explore Arachova’s folklore museum or sample local specialties such as honey, wine, and cheese. (B,L)

Sunday, October 24: Marathon | Athens: PM at leisure, farewell dinner
On our return to Athens today we stop at Marathon, site of the famous battle in 490 B.C. in which the heavily outnumbered army of Athenians and their allies defeated the Persians. We will see the site and its museum, and (time-permitting) also the Bronze Age cemetery. Continue to Athens for an afternoon at leisure. Gather this evening for our farewell dinner. Overnight at the 5-star Capital M Gallery. (B,D)