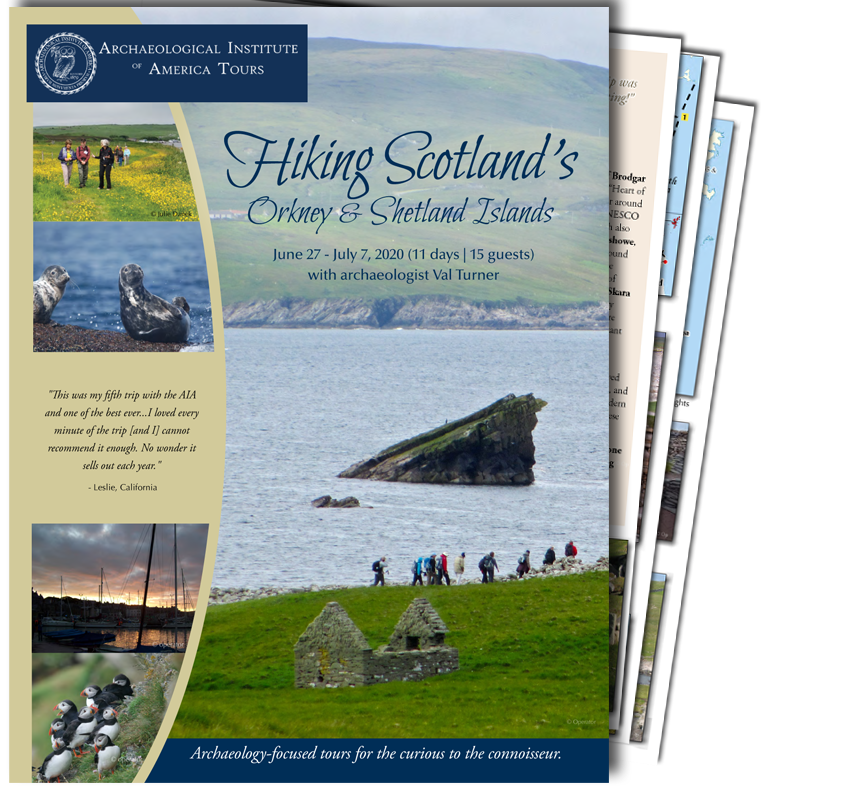 This tour has been canceled for 2020. The 2021 departure of this tour is in the planning stages, to be contacted when the tour becomes available, please call 800-748-6262 or email aia@studytours.org.

This is the perfect opportunity to explore all that Scotland’s Northern Isles have to offer: prehistoric stone circles, burial chambers, and settlements; quaint villages; huge seabird colonies; and remarkable plant life—all amidst dramatic landscapes. This will be Scotland seen slowly, with time for in-depth exploration at each site. The Orkney and Shetland islands have an amazing wealth of archaeological sites dating back 5,000 years. Together the islands have more than 18,000 known sites, with new discoveries being made every year. This archaeological saga is worth the telling, and nowhere else can the evidence be seen in more glorious a setting.
Highlights:

"This was my fifth trip with the AIA and one of the best ever...I loved every minute of the trip [and I] cannot recommend it enough. No wonder it sells out each year." - Leslie, California

The Ring of Brodgar, Orkney © operator

The Isle of Mousa, Shetland © operator

Hermaness, the northermost cliffs of the British Isles. © operator

This unique tour is more active than our usual land tours and features daily hikes that are easy to moderate in difficulty. To fully enjoy and visit all the sites on this itinerary one should be in good walking condition and, obviously, enjoy walking!
Two minibuses, each with a local driver/guide, will accompany our group, which is limited to only fifteen participants. Our guides will explain in advance the difficulty of each day’s walk(s) and, if you prefer, you can opt out of any walking excursion and be driven to the next stop; but, bear in mind that some sites can only be visited if you walk to them. The distance of and height climbed during each walk is estimated within the following itinerary.

Sunday, June 28: Aberdeen, Scotland | Ferry to Kirkwall, Orkney
Upon your arrival at Aberdeen International Airport (ABZ), at no later than 2:00pm, you will be met and transferred to the ferry terminal in Aberdeen, where our group will board the ferry to Kirkwall, Orkney. We will have dinner aboard the ferry, arrive in Kirkwall at about 11:00pm, and transfer to our hotel. Overnight at The Lynnfield Hotel for four nights. (D)

Monday, June 29: Skara Brae | Broch of Borwick | Ring of Brodgar | Stones of Stenness | Maeshowe | Welcome dinner
Distance total: 5 mi. Height climbed: 360 ft.
We start the day with a visit to Skara Brae, possibly Orkney’s most exciting archaeological site, which was buried by a sandstorm in about 2450 B.C. It was well preserved and then revealed by another storm in 1850. This, the “Heart of Neolithic Orkney,” which also includes the Ring of Brodgar, the Stones of Stenness, and Maeshowe (sites we will visit this afternoon), was inscribed as a UNESCO World Heritage site in 1999. Walk south along the spectacular coast with geos, natural arches, caves, and sea stacks, visiting en route the Broch of Borwick, perched high on a headland. In the afternoon, we will walk from the Ring of Brodgar to the Stones of Stenness and Maeshowe, which is Britain’s largest chambered cairn. Return to our hotel in Kirkwall and gather for a welcome dinner this evening. (B,L,D)

Tuesday, June 30: Isle of Rousay
Distance: 2.5 mi. Height climbed: 360 ft.
Today we will take the ferry to the Isle of Rousay, where we will wander the most important archaeological mile in Scotland, through 5,000 years of history, visiting a number of burial cairns including Midhowe, Pictish brochs, Viking settlements, and remains of the period of the Earls and the troubled crofting times. Excavations will be in progress at the Knowe of Swandro, and we will get a private tour of the site. Return by ferry to Kirkwall and gather for dinner at our hotel this evening. (B,L,D)

Wednesday, July 1: Isle of Hoy
Distance total: 6.75 mi. Heights climbed: 100 & 720 ft.
Take a morning ferry to Hoy, the highest and wildest of all Orkney Islands. Our walk will take us to the 5,000-year-old monument known as the Dwarfie Stane, an immense block of sandstone lying within a natural amphitheater. This is the only example in northern Europe of a rock-cut tomb similar to the chamber tombs of the Mediterranean. Drive through a glen, along what could be burial mounds, to Rackwick, from where we will walk to the world famous sea stack (at 450 ft.) known as The Old Man of Hoy. Return by ferry to Kirkwall this afternoon and gather for dinner at our hotel this evening. (B,L,D)

Thursday, July 2: South Ronaldsay | Windwick | Ferry from Kirkwall to Shetland
Distance: 3.5 mi. Height climbed: 825 ft., lots of ups and downs
This morning we will check out of our hotel and travel across the Churchill Barriers—a series of causeways built during the Second World War by Italian prisoners of war to defend the naval base at Scapa Flow from attack from the east—to South Ronaldsay. Our first stop is at the Tomb of the Eagles, a 5,000-year-old Neolithic tomb that was discovered in 1958. From here we will walk along the coast, with some fine coastal cliff scenery, to Windwick. The route leads around the back of several geos and a massive, fenced gloup (collapsed sea cave). In Windwick we will visit the Cairns excavation, an Iron Age settlement on the hillside overlooking the bay. The site includes buildings and evidence of use surrounding a large broch, which has been the main focus of excavations for the past decade. After a private tour of the excavations we will return to Kirkwall, stopping along the way at the Italian Chapel, built by Italian prisoners of war. Dinner tonight will be at The Lynnfield Hotel in Kirkwall, before we take the overnight ferry from Kirkwall to Shetland at about 11:00pm. (B,L,D)

Friday, July 3: Lerwick, Shetland | Old Scatness | Isle of Mousa | Scalloway
Distance: 2.5 mi. Height climbed: 215 ft.
We arrive in Lerwick this morning, after breakfast on the ferry. Travel south today, visiting Old Scatness Broch and Iron Age village. This is part of the crucible of Iron Age Shetland, also including Mousa Broch and Jarlshof (a site we will visit on July 6th), that was added by UNESCO in 2012 to the Tentative List of cultural World Heritage sites. In the afternoon we will take the boat to the uninhabited island of Mousa, which is famous for its Iron Age broch—the world’s best-preserved Pictish broch. It rises to 40 feet, and the skill and accuracy of its builders has resulted in a 2,000-year-old construction that appears today as though the builders have just laid the last stone and gone home for the night. Back on mainland we will transfer to our hotel in Scalloway. Overnight at the Scalloway Hotel. (B,L,D)

Saturday, July 4: Fethaland | Brae
Distance: 6 mi. Height climbed: 1,000 ft.
Fethaland is the northernmost part of Shetland’s mainland. We walk to a ruined haaf (“open sea”) fishing station dating from the 18th and 19th centuries. The ever-enterprising lairds established this and other haaf fishing stations on remote northwestern parts of Shetland to profit from the catch of ling and cod during the summer months. Extremely brave fishermen ventured out (50 miles) into the Atlantic Ocean in open boats called sixareens. Set within the fishing station are a large, circular Neolithic house and a ruined Iron Age broch. Another place of interest that we will encounter during our walk is a Viking soapstone quarry. Overnight at the Busta House Hotel for two nights. (B,L,D)

Sunday, July 5: Isle of Unst | Farewell dinner
Distance total: 5 mi. Heights climbed: 165 & 525 ft.
This morning we will take the ferry to the Isle of Unst, where the excavation of three Viking/Late Norse settlements forms the center of the much larger, multi-faceted Viking Unst project. A replica longhouse has been constructed, adjacent to which is the Skidbladner, a replica of the 9th-century longship Gokstad that was discovered in Vestfold, Norway. We will also visit Hermaness, the northernmost cliffs of the British Isles, which is home to over 100,000 breeding seabirds. Return by ferry to the mainland and gather this evening for a farewell dinner at our hotel. (B,L,D)

Monday, July 6: Jarlshof | St. Ninian’s Isle | Lerwick | Ferry from Lerwick to Aberdeen
Distance: 1.25 mi. Height climbed: 130 ft.
This morning we will check out of our hotel and travel south for a visit to Jarlshof, an archaeological site that was occupied for more than 4,000 years. There is a remarkable sequence of stone structures: late Neolithic houses, a Bronze Age village, an Iron Age broch and wheelhouses, a Norse longhouse, a medieval farmstead, and a 16th-century laird’s house. Our next stop is St. Ninian’s Isle, which is connected to the mainland by a tombolo (a bar of sand, or shingle). St. Ninian’s was settled in pre-Norse times, and the remains of an old chapel are still visible. We will walk across the tombolo and visit the site of the chapel. Back on the mainland we will drive to Lerwick, where you will have some free time to explore its shops and/or the excellent Shetland Museum & Archives, before we take the overnight ferry to Aberdeen at about 5:30pm. Dinner is aboard the ferry this evening. (B,L,D)

Tuesday, July 7: Aberdeen | Fly home
Arrive in Aberdeen this morning, and transfer to Aberdeen International Airport (ABZ) for independent flights homeward. Flights should depart no earlier than 11:00am. (B)