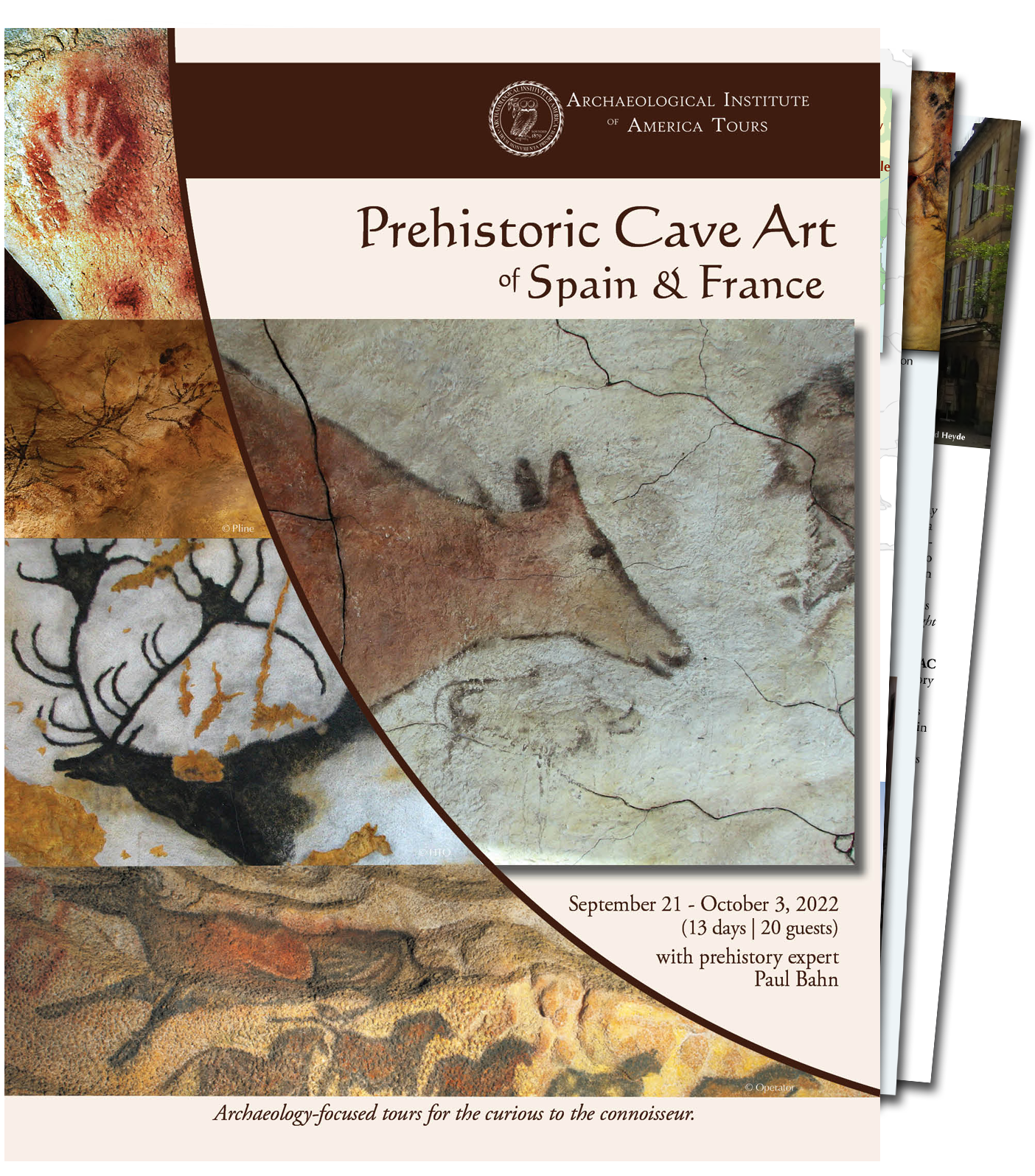 Investigate southwestern Europe’s most extraordinary prehistoric caves, including Lascaux IV, a new, exact reproduction of one of the most remarkable prehistoric sites ever discovered; Altamira II, a precise replica of the original that is often called the “Sistine Chapel of Prehistoric Art;” Atapuerca, the most significant early human site in western Europe; Las Monedas Cave and Cueva del Castillo, where 180 animal likenesses were painted some 12,000-14,000 years ago; Cougnac, which features paintings of extinct megaloceros and mammoth; Pech Merle, known for its “negative handprints;” and others.

For reservations or questions, please email us at aia@studytours.org (and include your full name) or call us toll-free at (800) 748-6262 (toll: 603-756-2884). To reserve your space using the online form, click here.
If this tour is full, we will notify you right away and add you to the waiting list.

For reservations or questions, please email us at aia@studytours.org (and include your full name) or call us toll-free at (800) 748-6262 (toll: 603-756-2884).
To reserve your space using the online form, click here. If this tour is full, we will notify you right away and add you to the waiting list.

Thursday, September 22: Arrive Bilbao | Santillana del Mar: Walking tour | Welcome dinner
Arriving in Bilbao, Spain (BIO) in the morning or early afternoon, take a group transfer (time TBD) to the charming medieval town of Santillana del Mar. One of Europe’s most perfectly preserved medieval villages, Santillana del Mar retains a romantic ambiance. After checking in at our hotel, take a walking tour of the village, noting its roots from the early Middle Ages when the first dwellings arose in the shadow of the Romanesque monastery of Santa Juliana. Gather for a welcome dinner at our hotel this evening. Overnight at the 4-star Parador de Santillana Gil Blas. (D)

Friday, September 23: Altamira II | Altamira Museum | Las Monedas Caves & Cueva del Castillo | Limpias
Today is devoted to visiting caves that are celebrated for their ancient rock art. This morning we visit Altamira II, an exact replica of Altamira (the “Sistine Chapel of Prehistoric Art”), decorated with vivid depictions of bison and other animals dating back 15,000 years, a testament to the artists’ skill in using rock formations to accentuate perspective. We also visit the Altamira Museum, with its highly informative exhibits on Cantabrian prehistory and cave art. We then return to Santillana for an independent lunch before setting off in the afternoon for the lush Pas valley, home to the village of Puente Viesgo, the “Prehistoric Capital of Cantabria.” We explore Las Monedas Caves and the Cueva del Castillo, where 455 images of hinds, horses, bison, deer, goats, aurochs, and mammoth dating back 22,000-14,000 years cavort on the walls, while other motifs such as hand stencils and red dots have been dated to more than 40,000 years ago, meaning that they may well have been made by Neanderthals. Continue on to our hotel in Limpias where will have dinner as a group. Overnight at the 4-star Parador de Limpias. (B,D)

Saturday, September 24: Covalanas Cave | Bilbao: Guggenheim Museum
On our return to Bilbao, we drive through the dramatic Carranza Gorges to visit the small Covalanas Cave, where some of the prehistoric drawings are rendered in a little-used technique known as “the inkpad,” in which lines are created from dots of red pigment. This afternoon is devoted to Bilbao’s spectacular Guggenheim Museum, Frank O. Gehry’s architectural masterpiece. This breathtaking modern structure consists of 19 galleries clustered around a central atrium that soars skyward for 165 feet, beautifully illuminated by natural light. The titanium roof is a unique, twisting, curving, metallic sculpture that integrates the city’s industrial waterfront with the nearby historic and business districts. Overnight at the 5-star Gran Hotel Domine for two nights. (B,D)

Sunday, September 25: Atapuerca | Burgos: Cathedral, Museum of Human Evolution | Bilbao
After breakfast this morning, we visit the caves of Atapuerca, a UNESCO World Heritage Site, which have provided the earliest and most abundant evidence of humankind in Europe. Continue on to Burgos, where we will have time for lunch and a brief visit to Burgos Cathedral before we explore the impressive Museum of Human Evolution. This evening is at leisure in Bilbao. (B,L)

Monday, September 26: San Sebastian | Bordeaux, France: Walking tour
We depart Spain for France this morning, stopping along the way in the charming city of San Sebastian for some free time. After a leisurely independent lunch, we will continue to Bordeaux, well-known for its wine industry, which attributes its “Golden Age” to the 18th century when far-sighted city fathers redesigned its urban center to make it the classical masterpiece we know today. Its old district is one of the largest protected architectural neighborhoods in all of France, which we will explore on a walking tour. Overnight at the 4-star Best Western Premier Hotel Bayonne Etche-Ona. (B)

Tuesday, September 27: Bordeaux: Musée d’Aquitaine | Pair-non-Pair | Les Eyzies-de-Tayac
This morning we visit the Musée d’Aquitaine, a museum of history and archaeology exhibiting prehistoric to present-day artifacts of the Aquitaine region, including the Ice Age bas-relief of the Venus of Laussel, one of the earliest and most famous images of women in prehistory. After free time for lunch in Bordeaux, we will visit the prehistoric cave of Pair-non-Pair, known for its animal engravings and fossilized animal bones, and then continue on to Les Eyzies. Overnight at the 4-star
Hôtel le Centenaire for four nights. (B,D)

Wednesday, September 28: Cap Blanc | Museum of Les Eyzies | Font-de-Gaume | Les Eyzies
The Périgord Region in the southwest of France is Europe’s most important prehistoric region. Its terrain, crisscrossed by gentle rivers flowing amidst extraordinary limestone formations, offered numerous shelters and caves for our early ancestors. Through expressive cave paintings, tools, and excavated remains, witness evidence of human existence and cultural evolution. Begin by exploring the shelter of Cap Blanc, which features a sculpted frieze of life-size horses, followed by a visit to the Museum of Les Eyzies, exhibiting artifacts from several millennia of prehistory. After lunch at leisure in Les Eyzies, visit the cave of Font-de-Gaume, featuring some 230 paintings and engravings, and then return to Les Eyzies for an evening at leisure. (B)

Thursday, September 29: Cougnac | Sarlat | Rouffignac | Abri Pataud | Les Eyzies
Begin the day with a drive to the prehistoric cave of Cougnac, known for its paintings of extinct megaloceros and mammoth. After lunch on your own in Sarlat, we drive along country roads to the prehistoric cave of Rouffignac. Explore its galleries onboard a train, admiring the numerous engravings of mammoth, rhinoceros, horse, bison, and mountain goat represented on its walls. On our way back to Les Eyzies, we stop at the site of Abri Pataud, where extensive digging in the early 1960s revealed astonishing details of the life of the Cro-Magnons. (B,D)

Friday, September 30: Le Thot | Lascaux IV | Lascaux II | Les Eyzies
Our day starts with Le Thot, a museum and animal park of living species similar to those that occupied this region during the Upper Paleolithic, such as reindeer, European bison, aurochs, Przewalski horses, ibex, and red and fallow deer. We continue on to Lascaux IV, the newest replica of one of Europe’s most significant prehistoric sites, famous for the profusion of high-quality and multi-colored animal paintings on its walls. It is the most complete replica to date, representing nearly all of the original cave’s paintings, and includes an interactive exhibit. End the day with a visit to Lascaux II, an earlier exact replica of the famous cave, where we will have more time to study the many figures in some detail. Return to Les Eyzies for an evening at leisure. (B)

Saturday, October 1: Pech Merle | Vers | Toulouse: Walking tour
Depart Les Eyzies after breakfast and visit the cave of Pech Merle, particularly known for prehistoric paintings of mammoth and horse, as well as “negative hand prints.” After lunch in the town of Vers we continue on to Toulouse, for a walking tour and then the balance of the day at leisure. Overnight at the 5-star Hotel Crowne Plaza for two nights. (B,L)

Sunday, October 2: Niaux | Toulouse: Farewell dinner
Visit the outstanding cave of Niaux, perched high above the river and comprising a vast network of galleries that stretch over a mile. The exquisite paintings within represent bison, horse, and ibex. We enjoy a light lunch nearby. Gather this evening for our farewell dinner. (B,L,D)