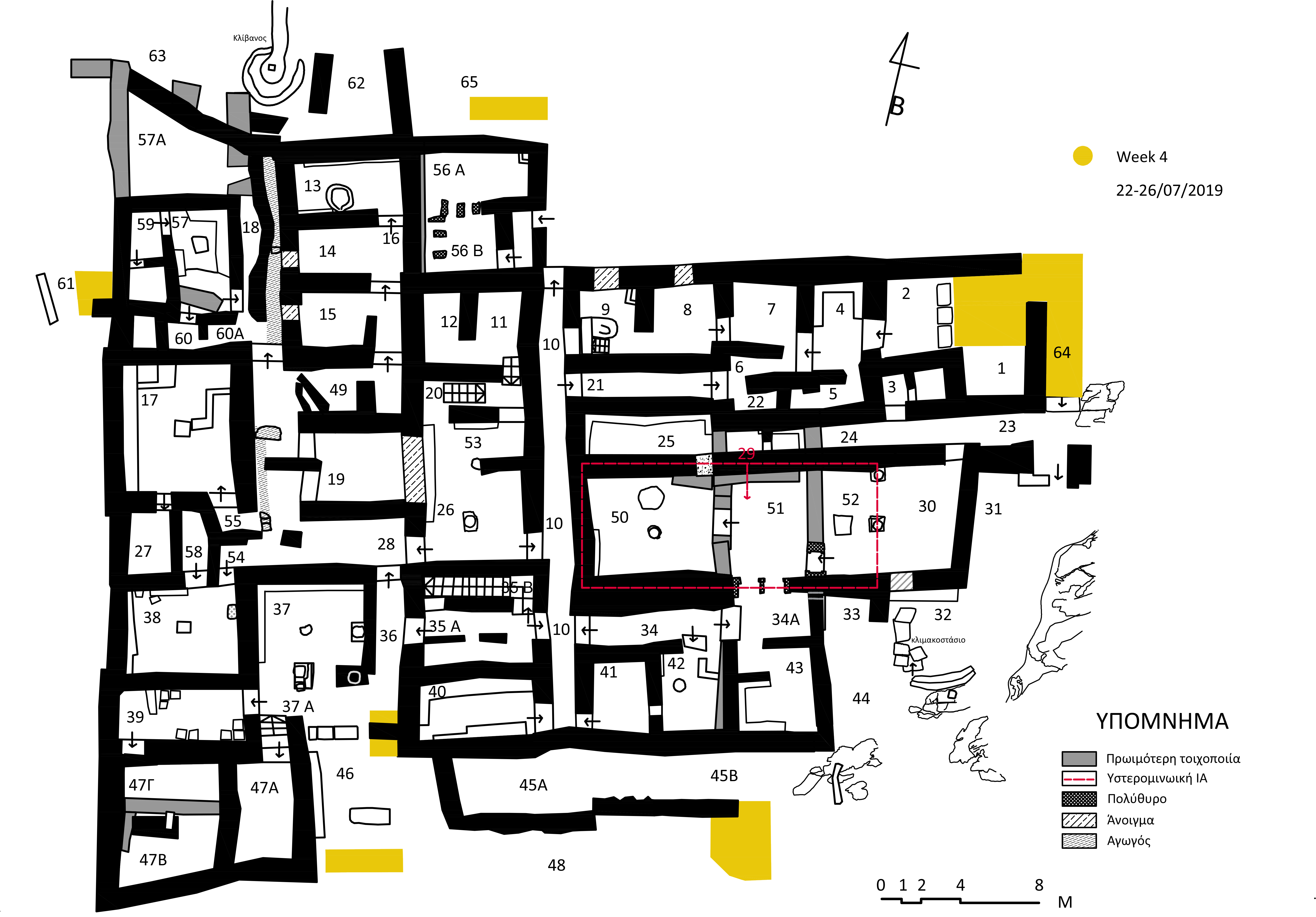 The excavation of Room 1 is completed during this week. Several big slabs (Fig. 1) were found in different levels at the northern and northeastern part of the room at the lower level. These slabs belong to an earlier phase. Traces of charcoal (Fig. 2) were also found indicating the existence of a wooden beam.  Many potsherds, some animal bones, a part of an egg-cup and a fragment of clay pipe were found.

The Corridor 37A is located at the southern part of Zominthos Main Building. During the fourth week a test pit was done at the eastern part of the corridor, where plaques of the paved floor appeared (Fig. 1). Few amount of pottery was collected.

The excavation of Room 46, which is located at the southern part of Zominthos Main Building, is completed for this year (Fig. 1-2). The finds of the room are mainly fragments of pottery and animal bones. Noteworthy, among the finds are part of a loom weight (Fig. 3), parts of hemispherical cup, and parts of two egg cups.

The removal of two more layers brought to light the eastward continuation of the wall separating spaces 45 and 48 (Fig. 1). Among the few finds were two pieces of rock crystal and the bronze blade of a small knife (Fig. 2). The excavation reached a point where the wall does not seem to proceed further to the east (Fig. 1). At this point this year’s work in the eastern part of the area named Room 48 came to an end.

The excavation of Area 61, which is located at the northwest side of Zominthos Main Building, continues for the second year (Fig. 1). During this week a large amount of fine and courseware pottery is collected along with animal bones. Noteworthy among the finds is a part of a decoration (Fig. 2) with spiral motif.

The excavation of Room 64 continues currently at layer 4 (Fig. 1-2). So far, more slabs which cover the bedrock have appeared in different consecutive levels that strongly suggest the existence of  a ramp. A large amount of pottery has been collected as well as some intact conical cups (Fig. 3), a fragment of an egg-cup and a rock crystal.

A new excavation sector was opened last week outside the north facade of the main building, in a yet uninvestigated area lying to the north of Room 56A and to the east of Room 62 (Fig. 1). The beginning of the removal of the surface layer in the southern part of this area has brought to light no architectural remains so far, but yielded a great quantity of pottery fragments of Late Minoan I date, as well as three conical cups and a small ground stone that remain in situ (Fig. 2).