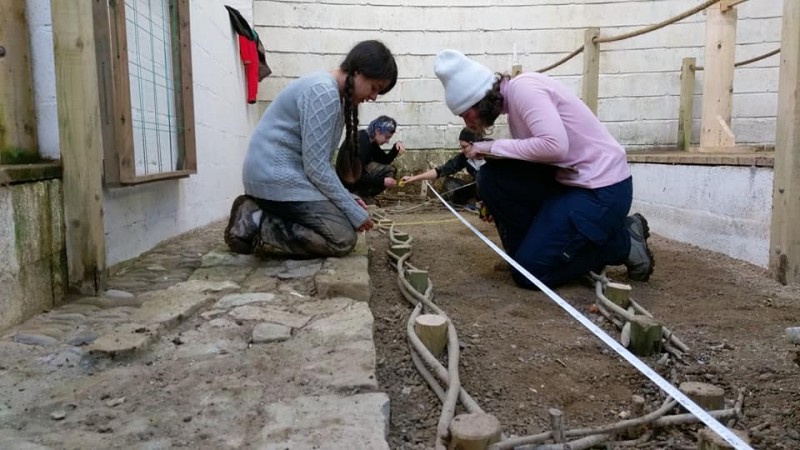 While January 15th was the start of the third week for Grace and I, it was only the second week for the students, and their first whole week on site.  Now that the majority of the lectures and field trips were over, it was time for skills workshops, digging, and my favorite – beginning the post-excavation process.

On Monday, we began planning workshops inside the Big Dig.  This is a great resource to have, as the students are able to learn the basics of drawing profiles and sections and taking offsets and levels on a replica feature, which means the scale is smaller and there is less pressure than planning the actual site.  The students broke into smaller groups and rotated through these workshops with Denis until Wednesday.

In the meantime on Tuesday, Steve gave an interesting lecture about Irish resources for conducting an archaeological assessment.  He provided us with the different sources, showed us how to use each one, and walked us through various examples – this is particularly interesting to me, as I will assist in conducting these assessments during the second portion of my internship in Birr.

On Wednesday, I was finally able to begin the post-excavation process.  I washed all the finds and samples we had collected, which included animal bone and some medieval pottery, and then left them to dry.  This work can be tedious, as I wash every piece with a toothbrush, but I enjoy it.  While I was working inside, Denis and the students uncovered a stone wall along the northernmost border of Cutting 1, which was exciting news!

Thursday was a break from digging, as we took part in a pottery workshop, put on by the Irish National Heritage Park.  The goal was to create medieval pottery with the same tools, or lack thereof, used by medieval Irish potters.  We even decorated our work using reeds and twigs found out in the park.

Friday was spent back on site, as students continued digging and I continued doing post-ex.  Now that everything had dried, I spent the day bagging and registering each find and sample so that they are properly recorded in our site archive.  At the end of the day, we all parted ways, excited about a successful first week and the upcoming weekend, which most spent exploring this beautiful country.