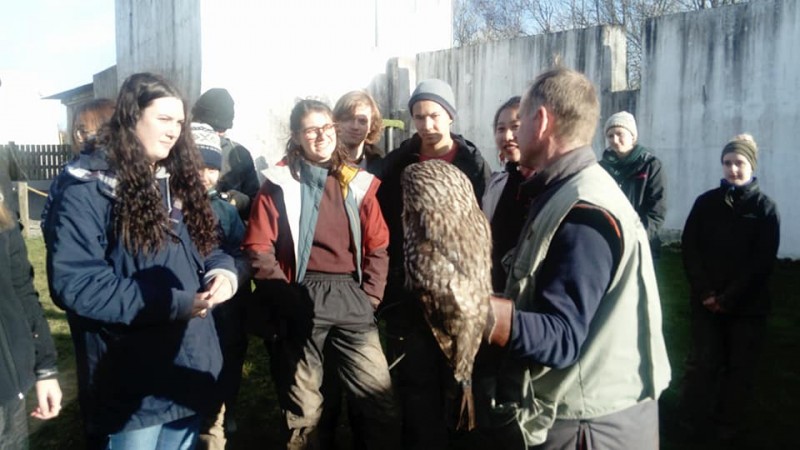 In the fourth of our internship series of blogs, Madeleine Harris describes students finds, birds of prey(!) and a Fulacht Fia. What an exciting week…

After a relaxing weekend, we all returned to site on January 22, ready for another great week of digging.  In the morning, Denis discussed his goals for the next two weeks with Richard, Grace and I.  We had a lot of work to get done, and the days were moving quickly! Once these goals were mentioned to the students and they were ready to begin their work, I continued post-excavation in the Big Dig and taught a small group of students about the process. I showed them how to properly wash pottery and animal bone and then supervised them as they worked.  After everything was washed, we practiced registering and bagging finds and samples that had dried over the weekend.  Later in the day, a couple of students, Max and Alice, found nice pieces of pottery – a strap handle and glazed rim sherd, respectively, and I assisted them with registering their finds.  This continued for the majority of the week, as students continued filling their finds trays, and I continued with the post-ex rotations.

Meanwhile, on site, the students were progressing with their excavations in both Cutting 1 and 2.  On Monday, the main focus in Cutting 1 was cleaning it back for photographs, whereas students in Cutting 2 focused on straightening it to a regular shape and removing the narrow baulk on the cutting’s northwest edge.  The rest of the week was then spent photographing and planning Cutting 1.

On Wednesday, we were invited to meet the birds of prey kept in the (replica) castle next door to the Big Dig.  Jim introduced us to his birds, we asked questions, and took photos with them.  It was great fun, and was a good opportunity to meet our “neighbour.”

On Thursday, we took a break from digging and participated in a Fulacht Fia and ethical hunting workshop with the Irish National Heritage Park.  Fulacht Fia are one of the most commonly found archaeological sites in Ireland, and the park has created a replica, which is used for workshops, frequently with school children.  Our workshop began when two ethical hunters came into the park with a deer they had killed, and they then proceeded to teach us about the process – gutting, butchering and cooking a deer.  We learned about the history behind Fulacht Fia and their use in the Bronze Age, although much is still unknown.  The boiled water likely served man purposes, possibly including cooking.  Once the water was boiled, we wrapped the meat in straw and left it in the water to cook.  These workshops are interesting because they provide a more hands-on historical experience and allow the students to learn a bit about experimental archaeology.

Friday was spent back on site, as students continued cleaning back, planning, and photographing both cuttings.  The students looked forward to their last weekend in Ireland, which most spent either touring the country or working on their research paper.  We also said goodbye to Maggie, Aisling, and Emily, who attended a two-week long program with us – thank you for your hard work!