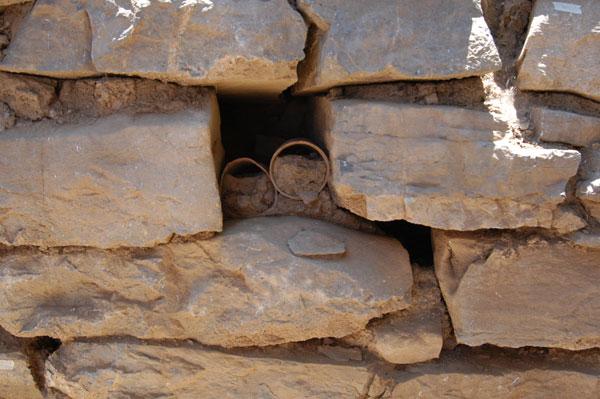 During the 2008 season, we excavated rooms 15 and 19. Room 15 had an opening on the east side, a window on the west, and two niches on the south wall. In one of the niches, we found three chalices with floral motifs and high stems, each of which has a hole at its base, meaning they were used as rhyta.

The presence of these vessels may indicate the Central Building’s double use—as a worship and crafts center—an interpretation that is reinforced by site’s location on the route that leads to the Idaean Cave.
[imagebrowser=21] On the paved floor, we unearthed a great number of vessels: handle-less cups, cylindrical and spouted cups, cooking pots, kalathoi, jars, lamps, beaked jugs, vessels’ lids, pithoi, etc., all of which date to the Late Minoan IA period. Due to the number and variety of vessels, their positioning, and the discovery of grinders and obsidian, we believe room 15 was used as a workshop.
[imagebrowser=22] We also found a large quantity of quartz crystals, which may show that this was the area where the processing of such minerals was undertaken. Quartz crystals and offerings made of quartz have been discovered in the Idaean Cave and in some peak sanctuaries, which indicates that they may have been used in Minoan rituals. In addition, we unearthed several pieces of pyroluzit (manganese oxide), which has a semi-metallic shine and is mainly found in Lavrio (Attica) and the island of Melos. With the appropriate processing, it can be used to produce colors and porcelain. We also discovered bones, stone tools, pieces of carbonized wood, and a bead made of chlorite.
[imagebrowser=23] During the excavation of room 19, we uncovered many large stones and identified a wall with three courses of stones. In addition, we found four handle-less cups, sherds of various types, cooking pots, and pithoi, as well as beads made of sard and agate. At the same time, Professor Sakellarakis took steps to protect the landscape and to preserve and grow vegetation in the wider area.
[imagebrowser=24]