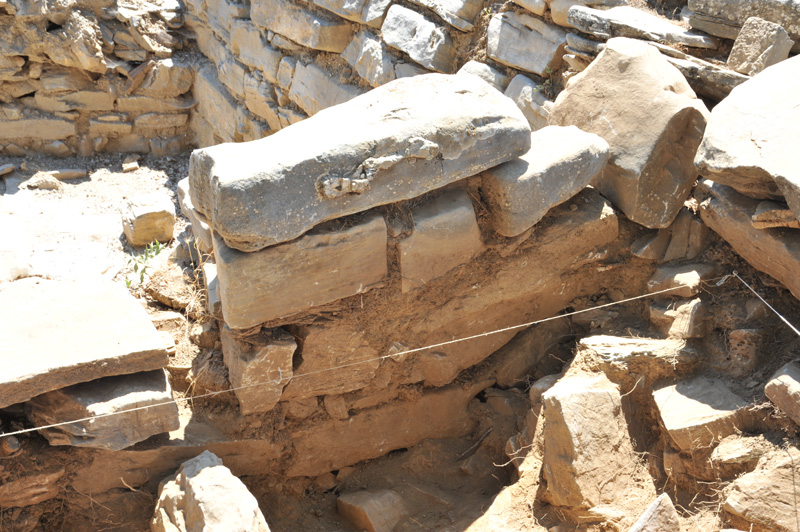 This week’s excavation has brought some changes-additions in the designation of the building in Area 29. The oblong building is divided into four new spaces, I-IV, in relation with the three walls running N-S, which were constructed in Roman times. In Space III, the excavation reached a clay floor across which small pieces charcoal were scattered. In addition to that, some bones were found on the floor as well as a small clay vessel of Roman date, which gives its chronology. Although there are few findings, this phase of the building’s history seems to end with a destruction caused by fire. However, this floor was found below the foundation level of the Wall γ. This means that the building seems to have two Roman phases.  It should be considered as certain that in the course of time this Minoan building has suffered at least two or maybe three constructive interferences, because in spaces II and III a course of well-hewn blocks were revealed running parallel and in contact with its north wall exactly below the foundation level of Wall γ. These blocks are either the remnants of another wall or of a bench. Continuation of the excavations will reveal the chronology of this lower construction and its function.
Area 2
[slideshow id=46]

Digging continues mainly in Trench 2 and Trench 5. In the former, a great number of fallen stones lay above what seems to be the “Mycenaean” deposit. This stratum, which will be excavated in the next days, contains cooking vessels, probably broken by falling stones.
In the latter, a cornerstone was found last week. Since then, walls have been partly revealed and the excavation proceeded to the interior of them. There was found a pithoid jar, along with a round flat stone–maybe a lid, and also another vessel. North of this “room” another wall was found in short distance, not yet fully unearthed.
Area 3
[slideshow id=47]

The excavation in Area 3 continued without interruption as we moved deeper in Trench 1 to reveal the structure/wall that the geomagnetic prospection revealed. The excavation is rather slow, since there is a vast quantity of sherds. We move slowly so as to determine if there are any intact vessels. However, the great humidity of the soil as well as the tree roots have completely destroyed the content of the layers. At the southeast corner of the trench, an accumulation of vessels was revealed that includes 7 conical cups and a kalathos, as well as a milk jug. Besides, we found many sherds of cooking vessels and some fragments of charcoal along with animal bones. This may indicate a food production/consumption activity, though it is too early to draw any conclusions. The quantity of ceramics was great. Along the east side of the trench, there are several large slabs that have fallen from the walls of the Room 13. After carefully documenting them, they were removed to allow excavation to continue to the next layer.  At the fourth layer, we encountered some vessels that seemed to be in a better state of preservation. The second week ended with the discovery of at least two vessels, which were not removed, and of large jaw of a big animal.

In Trench 2 we moved deeper so as to understand the way that the stones fell from the neighboring structures and to reveal the walls and the openings of Rooms 14 and 15. We encountered bigger stones that definitely fell from the nearby walls. In order to facilitate a future restoration project, we positioned some of these stones are atop of the remaining walls of Room 15. We traced only a few sherds of well-known typologies, such as conical cups, pithoid jars, and a tray. The wall of Room 15 is gradually revealed. However, we decided to stop the excavation for a while in order to have the conservator develop a way to support the wall of the Room, so it does not collapse because of the great depth that we excavated. Also, the existence of the tree at the middle of the trench acts as a check, since its thick roots penetrate the whole area.