So far, our excavation has revealed three Roman walls running perpendicular to the building’s east-west axis, as well as the clay-earth floors of the Roman occupation in Sectors III and II, where we found the lower courses of a built hearth. This week we also uncovered the Roman clay-earth floor in Sector IV.
It should be mentioned that in the last year’s excavation here, we opened two trenches, 1 and 2, to explore the perpendicular walls of the building here. In Trench 2, which is included in the borders of the newly defined Sector II, we found a paved floor of Minoan Neopalatial times. In Sector II, our goal for this year is to reach the level of the paved floor. During the excavation we came to the Minoan destruction layer, which consists mostly of dark soil. This destruction layer, at least 0.25m thick, is buried under a mass of stones and big well-hewn blocks that fell in various directions. We are currently removing these stones.
We also discovered this week that the line of blocks running parallel and exactly below the building’s north wall for most of Sector II is an older wall, the foundation level of which seems to be the level of the paved floor. What is interesting is that this wall ends about 2m before the Wall α. In the eastern part of Sector II and among the fallen blocks used as foundations for the large blocks of the north wall, we found two pieces of a pair of long goat horns and two vessels, one bowl, and one fruit stand of Minoan times.
[slideshow id=48] Area 2 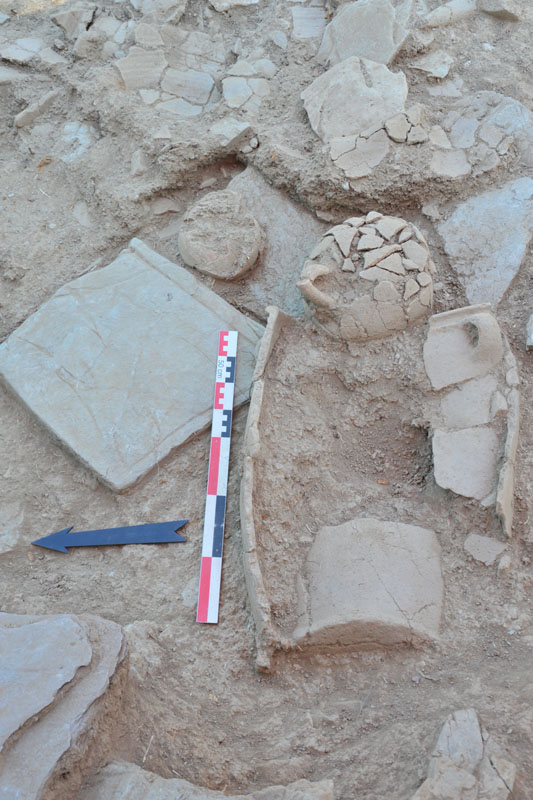 Small pithos and round amphora, along with another small vessel

We continued to focus on Trenches 2 and 5 this week. An extensive layer of fallen stones and an accumulation of pottery characterizes Trench 2 in its central and northeastern parts. Some vessels were visible between the stones, so we excavated and removed much of this stone layer, allowing the pottery to be seen as a whole. There were a large number of vessels of everyday use—cooking pots, storage vessels, etc.—and several stones, mostly schist slabs. Among the more interesting finds were a globular loom weight, some stone tools, and three vessels, which seem to be whole and not far from their original place. These are a small pithos with a small round amphora, which once sat on the rim of the pithos, and another small vessel.
Removing the exposed pottery fragments, we realized that there were more under the stones. So we removed the stones, bringing those sherds to light. In addition, we found earth with schist fragments, just like the schist used to cover a roof or floor, in two or three places around and in the pottery accumulation. We encountered more of this earth during the removal of the vessels and excavation of the pithos. But we cannot yet conclude whether there was an immediate destruction of the building or a gradual one following its abandonment. The objects left behind either had roof or wall stones fall on them, or fell from the upper floor and shattered on impact.
In Trench 5, we fully revealed the new wall along the northern side of the trench. A strong wall, almost as strong as it runs nearby, leaving a narrow space between the two. To the east it reaches another wall, starting from the large corner stone and extending to the north. This wall complex agrees with our supposition that a large building or group of buildings exists here, as indicated by geomagnetic prospecting.
[slideshow id=49] Area 3 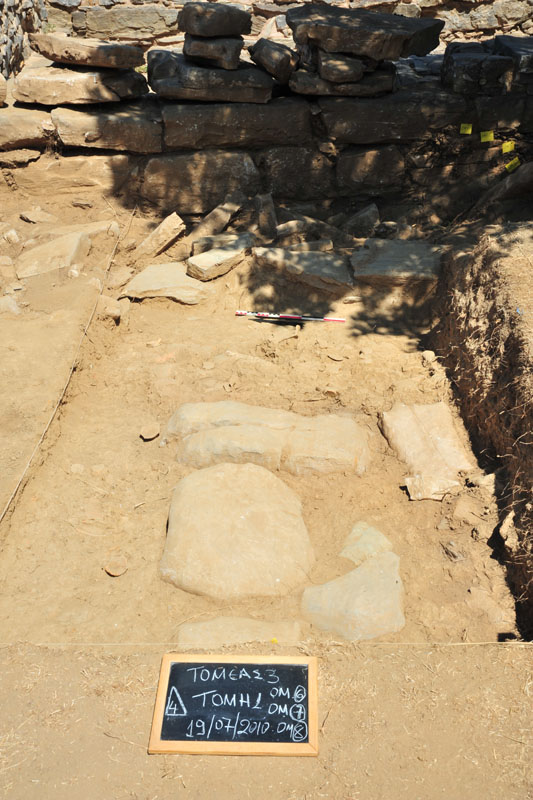 In Trench 1, we continued to strip the soil from where we detected the accumulation of vessels and sherds. We decided to leave the vessels in place initially so that we could form a general idea about them. Also, we unearthed five monolithic slabs that seem to belong to the wall revealed by geomagnetic prospecting. After clearing and recording the area with the pottery accumulation, we started to lift out the intact and recognisable vessels, as well as the rest of the ceramics. We removed nine conical cups, then moved toward the western part of the trench where we removed five more. It is now certain that a wall existed in this part of the trench. Also, a row of stones continues toward the south, which probably means that the wall may have been the corner of a structure.
We decided to extend the trench to the west to see clearly the wall’s construction, and to the south to determine if it forms a corner. The westward extension yielded numerous sherds, including the spout of a bridge spouted jar, as well as whole vessels. The southern extension yielded more than 10 intact conical cups, as well a fragment of a quite large pithos. Continuing deeper, we realized that the stones we uncovered here first days of the excavation form a corner.
We also cleared a small area near the main trenches to verify the existence of the wall there. (Τhis area had been cleared in 1990s as well during the first excavation season.) It is certain that the wall we unearthed there is part of the wall revealed in Trench 1.
Since we identified the walls revealed by geomagnetic prospecting, we thought fit to stop the excavation in this Area and concentrate on the other two for the rest of the season. We will resume investigation here at a later period.
[slideshow id=50]