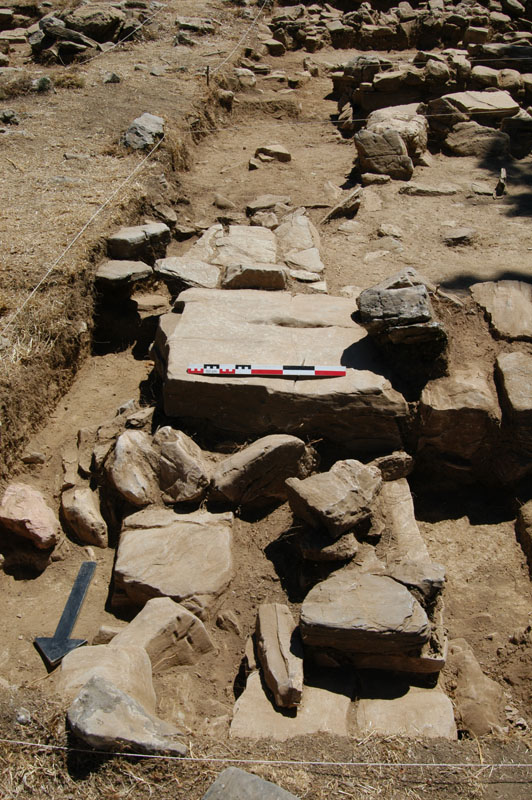 Area 1
The final week of excavations in Area 1 yielded interesting information about the building’s history. First, up to now, we had found three destruction layers—one from the Roman period and two from Minoan times. The first Minoan layer was discovered in Sectors II, III, and IV. The second, in Sector II, contained not only at least six fruit stands and one kyathos bowl, but also one wall, which we called A, that extends parallel to the north wall and occupies most of the north side of Sector II.
Wall A belongs to a Minoan phase older than the one in which the north, west, and south wall of the building were built. We believe that another wall, B, runs beneath Wall β, since we found at least four slabs in a row (and gray-colored slabs of Wall B lay beneath Wall β). Wall B dates to Minoan times and must be contemporary with Wall A.
Although the excavations this final week have taken place mostly in Sector II, research also continued in Sectors III and IV, where we at last reached the bottom of the Minoan destruction layer. Finally, in Sector I, we found one more wall, which begins at the north wall but never terminates at the south wall. This wall we named δ.
[slideshow=53] Area 2

Large square cornerstone; the area was excavated and the fallen stones were removed to reveal the trapped vessels

The excavation of the Mycenaean site at Mnimata proceeded with minor work in Trenches 1, 3, and 5. From the latter, we removed the remains of a pithoid jar, trapped by fallen stones, and a fragmented cooking vessel. At the same time, we further excavated the large square cornerstone and the adjacent walls to get rid of the (obviously) fallen stones. Then, we proceeded to reveal the room, which takes up most of Trench 5. We found large stones that look like a bench alongside the north wall. Among these, we unearthed part of a large cooking vessel, most probably the same one as in Trench 5.
Trench 2 demanded most of our attention this week. After excavating the pottery from the central and northeastern parts of it, we removed schist slabs to continue digging beneath them. As expected, we kept unearthing pottery. However, this time, there was a significant difference: in contrast to the large, coarse cooking and storage vessels of the upper level of the accumulation, we discovered finer pottery, such as cups and stirrup jars.
In addition to the stone finds from last week, we excavated even more, of several shapes—globular, discoid, and formless—in the central and southwestern parts of the trench. A stone with a shallow, round cavity, perhaps used as a mortar, was brought to light, too. There were also some clay objects, probably spindle whorls, and a bronze tool that looks like a small chisel. These finds change the impression we had of the room last week. We thought that it might be a kitchen. Now, however, we believe it may have been a workshop or a multifunctional room.
[slideshow=54] Conservation
While this summer’s excavations were underway, our conservator Myros Nikakis restored a large pithos that had been found at Zominthos during excavations in the 1990s. The jar will be exhibited in the museum of Anogia on Crete, which is under construction. Also, all the other fragmentary vessels found during the early excavation were washed, dried under the sun, and then restored.
[slideshow=51] Digital Museum
During the 2010 excavations, team member Constantinos Papadopoulos, in collaboration with the dig’s directors, produced a virtual museum model with finds from the Ceramics Workshop that was unearthed in 1989. Since there is not an official exhibition space and the archaeological data from this room has not yet been published, we decided to create a digital museum where visitors can see the various finds, along with pictures from the excavations. Very soon, it will be presented on the official Greek site of the excavation, www.zominthos.org. 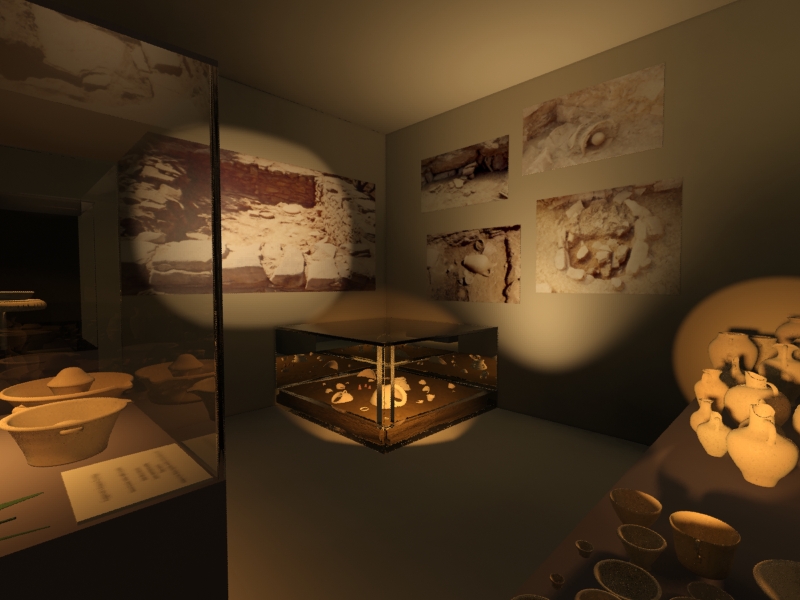 Virtual exhibition of finds from the Ceramics Workshop (general view)