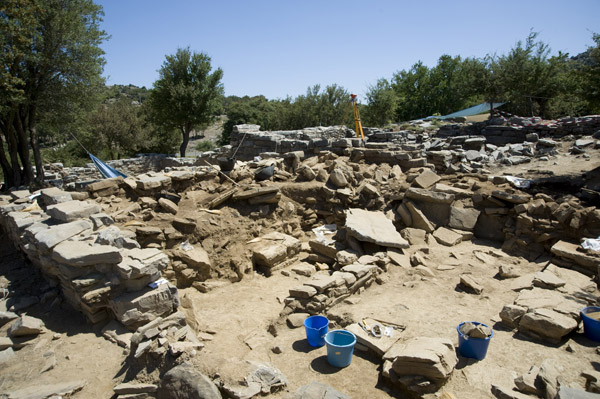 With the aim to reveal any architectural features of Area 2, we decided to expand the excavated area in both its northwest part, as well as along the east and north sides (see Trench Θ’ below).

It is really important that towards the end of the second week, we started revealing at the north side of Area 2, a row of large stones which comprise the upper part of another wall, which is parallel to the other two walls which came to light during the previous week (fig. 1, 2). Apart from the pottery found in our trenches, mainly consisting of conical cups, as well as a brazier and a sherd from a large storage vessel (pithos) (fig.3), we unearthed several special finds, such a bead made of sard (fig.4), a bronze pin (fig. 5),a small spindle whorl (fig. 6) and a brazier (fig. 7).

Area 1 team was moved to Area 2 (Trench Θ’), in order to uncover the south wall of Room 15, that delineates the two areas (workshop complex and Rooms 19/28). Until the end of the week the first two rows of stones of this wall were uncovered, while the third row gradually appears. Great quantity of pottery was also unearthed with characteristic handless conical cups, legs and handles of cooking pots, as well as sherds coming from larger storage vessels. It is interesting that the wall seems that it does not continue at the west part of the trench, indicating some kind of opening or a corridor leading to the interior of areas 19/28. This will be answered in the following weeks, as the excavation progresses in depth. A special find was a spherical stone grinder.

The excavation continued for the second week in two spots of Area 3: a. At the west part, in areas III and IV, b. at the eastern part in area 30.
In areas III and IV we continued the removal of layers of black soil as well as a great number of large limestones scattered higgledy-piggledy, many of which continue in a greater depth (fig. 1a, 1b, 2). Some of them are quite big and occupy the interior of both spaces, also being spotted under the foundation of Wall γ, as well as the foundation of the north and the south wall. It is interesting that under the foundation of the north side of Wall β, we identified that Wall ΤΧΑ, which was revealed last year, continues in Area III and is dates in Minoan period (fig. 3). Also, at the lower layers of the south side of Wall β, we uncovered a blocked opening between areas II and III, with a great accumulation of lime stone (fig. 4). Characteristic of the disturbance of area III is the presence of pottery coming from the Early Minoan period as well as the base of a small vessel dated in Late Hellenistic/Roman times. Lastly, in area III we collected a piece of unworked rock crystal and from area IV a miniature vessel (fig. 5).

Area 30 is located at the eastern part of Zominthos’ Central Building (east of area 29) and is excavated for the first time (fig. 6). The first layers have brought to light pottery of the Hellenistic and Roman times, such as a fragment of a Roman lamp (fig. 7), as well as a sherd from a Roman kantharos (fig.8). A special find is a bronze coin that bears a low relief, which however cannot be identified due to the high erosion of its surface. At the middle of the trench an acer, a well known tree of the region exists, which however will not be cut, in an attempt to protect the environment.

In Room 7 the excavation proceeded very carefully aiming to the safe removal of the plaster. Medium sized pieces have been already removed and many others unearthed. This procedure brought to light a considerable amount of colored plaster surfaces. The colors found are black, red and blue. All these pieces of plaster have been brought to the conservation lab.
In Room 8 the semi-circular construction was removed and the excavation continued in depth. An interesting find is a piece of plaster mainly painted with black color and at one end a thin white band, followed by red color. The fact that colored plaster was found in this room is more or less expected, since the opening in the northern wall makes the room more special than the other spaces without windows or other openings.
[slideshow id=64]