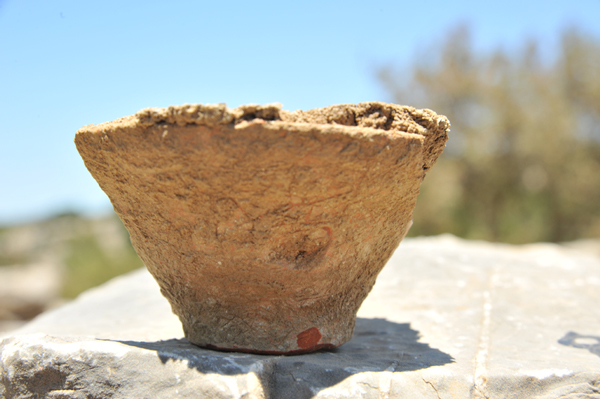 The excavation in Area 1 restarts after a short break of one week. The excavation goes on slowly due to the unearthing of several vessels, such as conical and spherical cups  (fig. 1-2-3) and pottery fragments. The floor of the corridor is being revealed with the most important feature being its threshold (fig. 4). Much carbonized wood (fig. 5) and burnt soil have been revealed in both sides of the threshold indicating the existence of a door.

The excavation proceeded in all trenches of Area 2. We moved away stones which belonged to fallen walls of the first floor (fig. 1, 2) and revealed the edge of a partly destroyed wall at the southwest corner of the Area (fig. 3). In the west part of Room 19, after moving away a dark burned stratum we revealed some small stones (just north of wall A), maybe belonging to a floor (fig. 4), and an underlying stratum of burned red soil (fig. 5). The pottery found in our trenches consisted mainly of conical cups, as well as sherds belonging to various shapes, among them storage vessels and cooking pots (fig. 6). Very important where once again our special finds, such as a big piece of rock crystal (fig. 7), a pin made of bone and a steatite seal depicting a couple of water birds in front of a landscape with plants (fig. 8).

The excavation in Trench Θ’ continues this week by removing the huge limestone slabs that are visible across the surface of the whole trench and hinder the progress of the work (fig. 9). By gradually removing these blocks, we uncover the front side of the south wall of Room 15, and particularly the first four courses (fig. 10). The wall has a slight inclination southwards. The excavation of the last layers has revealed a great amount of greenish and reddish schist slabs, most probably indicating a fallen upper floor. The pottery unearthed consisted of both coarse and fine sherds. We revealed fragments of cooking vessels, as well as sherds of smaller fine vessels often bearing decoration (fig.11). Among the finds, we brought to light 10 conical cups which are characteristic of this period (1650 BC) (fig. 12), as well as a base of a slender vessel, most probably an ewer or a little amphora (fig.13).

The excavation continues in areas III and IV, as well as in area 30. We also started excavating area II, located next to area III.

We continue the excavation by removing the big limestone slabs. We observe that these big blocks are gradually reduced, and as we move on deeper the characteristics of the trench change. It is probable that we face a layer which is dated before the LMI destruction  (fig.1,2,3).
In area III we identified the role of wall β, since at its north side, under the Roman foundation, the Minoan wall ΤΧΑ of area II exists. We also detected (under its Roman phase) that at its central and south part, its Minoan phase continues deeper. We also examined the blocked opening of areas II and III, at the surface of which we identified accumulation of limestone, which may be the under layer of plaster. (fig.4).

It is worth noting that areas III and IV are highly disturbed; this is amplified by the fact that at the same layer we unearthed pottery both from Late Minoan period and Late Geometric/Archaic periods. In area III we collected a big ceramic spout most probably coming from a large pithos (fig.5), as well as two stone tools, one of which is a grinder.

We continued the excavation in area 30 to clearly define the dimensions of this region. By removing several big slabs from the surface of the trench (fig. 6), we unearthed  a few sherds, animal bones and pieces of carbonised wood. A special find is a bronze earring which was found in between the fragments of an ewer (fig.7).

The removal of the plaster is still under way and gradually the layer of slabs, once comprising the upper floor, is unearthed. The plaster is divided into several numbered parts, which are moved to the conservation lab (fig. 2, 3).

The pieces of plaster are increasing in number, while many of those bear colors. Of great interest is the southwest part of the room, where pieces of plaster with black and red colors separated by a thin white-not colored- band are collected.

Small quantities of dirt are excavated at the opening in the wall dividing Rooms 7 and 8.