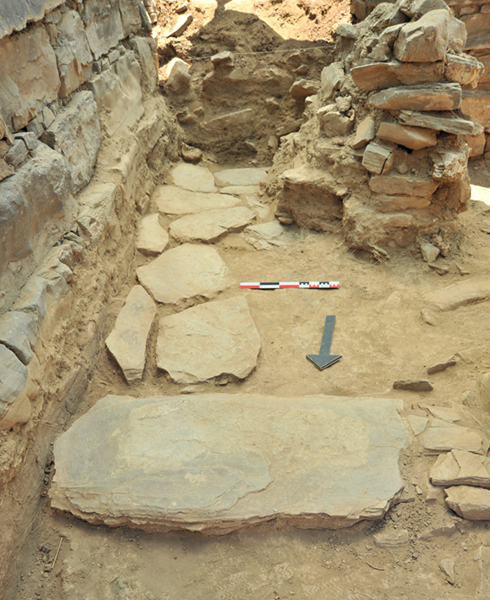 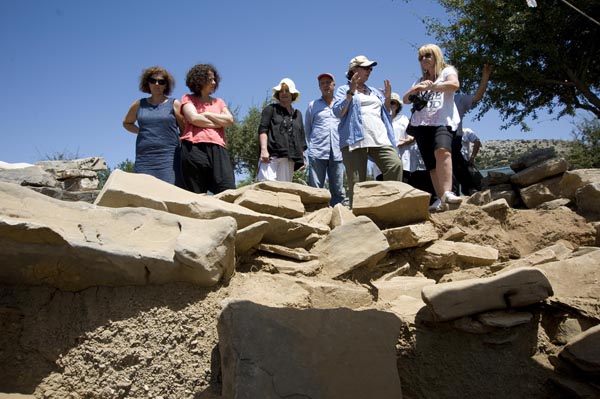 Dr Efi Sapouna-Sakellaraki guides the members of the Central Archaeological Council (K.A.S) at the excavation.

The excavation in Area 1 continues on 25/07/2011. The paved floor of the corridor is completely revealed (fig. 1). Two conical cups, a spouted cup (fig. 2) and pottery fragments are being unearthed. What’s more, the eastern wall of Room 15 is being cleaned from the fallen soil and rubble, until the point that static problems are not caused (fig. 3). Another conical cup is being revealed along with some pottery fragments. A test trench is conducted in the part of the corridor where no pavement exists (fig. 4). The result is burnt soil that includes carbon and some bone and pottery fragments. The test trench stops and so does the Area 1 for this excavation period. It seems that the reason for this empty space in the paved floor is some kind of disruption or some architectural feature that remains obscure.

The excavation concentrated in room 28. We revealed three square stones (with direction from south to north) between walls A and Γ (fig. 1). We also revealed strata with ashes and burned soil, as well as stones which used to form part of a floor (fig. 2, 3). At trench I we revealed a part of the east wall of the Area, just at the east of the huge fallen stones of the staircase (fig. 4). Our pottery is of the same character with that found during the past weeks, such as conical cups, fragments of large storage jars as well as sherds of several smaller vessels . Remarkable is a brazier (fig. 6). Finally, a second steatite seal similar to the one found last week was our most important find (fig. 5). The new seal carries the depiction of a lion.

In Trench Θ΄, the northern part of area 19/28, the excavation continues with the removal of five layers, revealing the first seven preserved rows of the south wall of Room 15 (fig.7). It is very interesting that near the base of a large pithoid jar, we revealed a bronze knife (fig.8) and an awl (fig.9), as well as a great quantity of animal bones. Among the interesting finds is a grinder as well as a loom weight (fig. 10). As indicated by the large number of schist slabs unearthed, as well as the traces of clay earth, palster, lepidha earth (hard-packed gray clay) and carbonised wood, we excavate the fallen floor of the storey.

This week, we decided to excavate area II which is between the north and south wall of Area 29, as well as between the walla and Wallb of the Roman Times. After removing a fill of about 50cm, we unearthed a paved floor consisting of large stones, most probably belonging to a courtyard or a porch of the building (fig.1). The excavation in this area showed only a few finds, including an intact conical cup and a horn along with bones from a deer’s skull and more importantly, four different architectural phases (fig.2):

After having thoroughly numbered, photographed and drawn the Roman walls in areas III and IV (walls β, γ) (fig. 3, 4), we decided to remove them, in order to reveal the underlying walls dated in the Minoan period, which comprise the remains of the courtyard of Zominthos’ Central Building.
In area III, after the removal of the stones that were blocking the entrance (fig.5), under the foundation of the north part of wall β, we identified that the Minoan wall A continues to the west (fig.6). Also, south of the blocked part we identified the foundation of another wall made of huge limestones, also of the Minoan period (fig.7). Limestones at the surface of the foundation of this wall, are most probably coming from a destroyed paved floor.

In area IV, under the southwest part of the foundation of wall γ, we unearthed the stone base of a column with a diameter of half a meter (fig.8), as well as a great accumulation of wood possibly coming from the wooden part of the column (fig.9) . At the west part of area IV we also revealed across the west wall a possible destroyed bench (fig.10).

The fact that a stone base of a column was revealed in conjunction with the rest of the finds in areas I-IV and 30 in Area 3, ensure that a courtyard possibly roofed existed, as well as architectural remains earlier than the Late Minoan IA Period (1650BC).

In area 30, we revealed  the stone base of another Minoan column with a diameter of half a meter, which is based on a hewn square stone (fig.11, 12). Near the column we collected large pieces of carbonised wood possibly coming from the wooden part of the column. We also revealed a bronze ring (fig.13).

This week the excavation in Area 4 comes to an end. In Room 7 the plaster is removed and the paved floor is unearthed (fig.1), while in Room 8 the excavation continues, but also gradually comes to end since many pieces of plaster are revealed, hampering the progress of the excavation in depth (fig. 2).

In Room 7 all pieces of plaster that could be removed, were removed and brought to the lab for conservation. The rest, those under the slabs or still hanging on the walls, were fixed in situ.

In Room 8 pieces of plaster were found in various places. In this room, particularly at its southwestern part, many colored surfaces were found. The colors are red and black, covering extensive surfaces and be divided by a thin white (not colored) band (fig.3). Furthermore, extensive plastered surfaces are found along the southern wall. Also, an area full of charcoals and more pottery fragments than usual was found at the southwestern part.