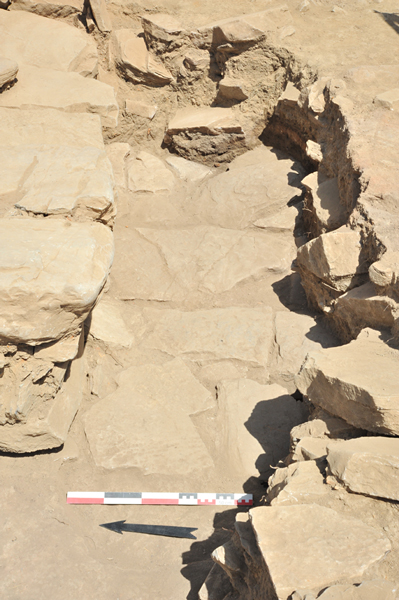 In Area 2, we revealed part of a paved floor in Room 28, at the part which is south of wall Γ (fig.1). Therefore it becomes apparent that the excavation has reached or almost reached the floor level both in Room 28 and area 19. Also, in Trench H’ which is parallel to Trench Θ’ at the north, we brought to light, just before the end of this year’s excavation, a paved floor which is the same with that unearthed across the south face of Wall Γ (fig.2). Once more, the excavation in Area 2 gave some remarkable finds. Apart from the usual conical cups and some other vessels, we found a horn of a big animal (fig.3) and a sherd which is decorated with bands and spirals coming from the well-known chalices which were used in rituals (fig.4). Also, a big quern stone, a stone grinder, a bead made of agate (fig. 5), a bronze pin (fig.6). A unique find was a bronze figurine of an adorant which is one of the most important finds of this period and eminent example of Minoan metallurgy (fig.7).

Last week, in Trench Θ΄, we removed great quantities of schist slabs and lepidha earth (hard-packed gray clay) as well as medium size limestones indicating that we were excavating the fallen storey. The excavation goes on this week by removing six layers of soil reaching the surface of the floor gradually revealing thick layers of burnt black and red soil as well as carbonised wood. The evidence indicates that a great fire took place in this area, where probably a wooden floor or other wooden structures were in use (fig.8). Since we gradually reached the floor level we unearthed a great number of vessels˙ many of them were concentrated at the threshold of the corridor (fig.9). In total, we numbered 47 vessels at the floor level, many of them intact. Most of them were conical cups (10), but we also revealed a few spherical cups, a jug , as well as a cylindrical vessel, which was probably used as a stand for a large vessel (fig.11). Among the interesting mobile finds revealed, there was a ceramic ellipsoid object (fig. 12) which might have been used as a spindle whorl, as well as a pin head made of bone which bears decoration with a rosette (wheel pattern) consisting of four leaves.

After 5 weeks of excavation we completely unearthed the paved floor of Corridor 16 (fig. 16), consisting of two thresholds and 28 limestone slabs. It is very important for the use of this area that two low walls came to light (wall Δ, ΣΤ), dividing the Trench Θ’ with area 19 and the corridor 16 with Trench Θ’ accordingly, indicating that a separate room existed there. Therefore, we decided to give a separate number to that Room (49). Also, another low diagonal wall was revealed at the middle of Room 49, for which, we cannot yet identify its actual use. Although we haven’t yet reached the floor, it is highly probable that this area was also paved with limestone slabs as is the case with area 28 which is parallel to room 49. See the photograph below for the various architectural features revealed.

In area 2, we decided to remove the Roman hearth in order to examine the underlying structures (fig.1). Below the hearth, the paved floor which is visible in the remaining room, also came to light (fig.2) It is dated at the earliest phase of Area 3. The Roman hearth was reconstructed nearby the trench.

After the removal of Wall γ, areas III and IV were unified (fig.3). In excavation area III after the removal of several limestones and schist slabs which were probably comprising part of a destructed floor on the top of the earlier floor, we unearthed the rest of the paved floor which consists of limestones of even greater size. The inclination of the floor in conjunction with the different heights that the limestones exists and the fact that large quantities of carbonised wood were revealed, indicate that a great destruction had happened in areas II and III. It is also important that we managed to find the foundation of Wall A at the north side of areas II and III, as well as the foundation of Wall B, which is between the two areas. These two walls seems to be of an earlier date in comparison to the Late Minoan IA period of the building. Wall B is founded on the paved floor, while at its south side is coated with plaster. Its central part seems to consist of limestones coming from the earlier building (fig.4).

At the greatest part of excavation area IV, we revealed, after the removal of several fallen stones, the extension of the paved floor. We also completely unearthed the base of the column which was revealed last week. It is apparent that typologically is different from the columns that were found in area I last week. In relation to this base, we found two big pieces of carbonised wood which most probably comprise parts of the wooden column (fig.5). It is also interesting that close to the west/southwest side of the west wall, a structure made of three rows of stones and covered with plaster, was revealed. This was probably a bench (fig.6). Another structure, which was initially revealed during the last weeks at the north side of area III, seems that is connected to Wall A, extending to the west and the north/northwest side of area IV. Also, part of Wall B was removed, revealing a huge threshold and two pilasters indicating a great opening to the west side of this Room (fig.7). There is also the chance that this opening is a pier-and-door, if the flat limestone that was revealed at its north and goes under the north wall of the building is also a threshold.

At the north side of area IV, at the level of the paved floor we had a great find (fig.8): a circular hearth with a diameter of about 1.30m. being made of dressed stones and clay bricks which bear engraved decoration with spirals. Among the interesting mobile finds, there is a golden sheet (fig.9), which was unearthed nearby the base o the column.

The excavation stops for this year, after five weeks of fruitful work. In Area 3, we revealed a ‘Minoan Hall’ consisting of a courtyard, a porch and the main room as well as great finds, such as the columns, the hearth, the paved floor etc. It is really interesting that the locals, a long time before the excavation of the building, were calling this area the ‘Big Room’. Its great importance is also lying in the fact that continuous presence from the earlier Minoan times until the Roman period is attested at this building.