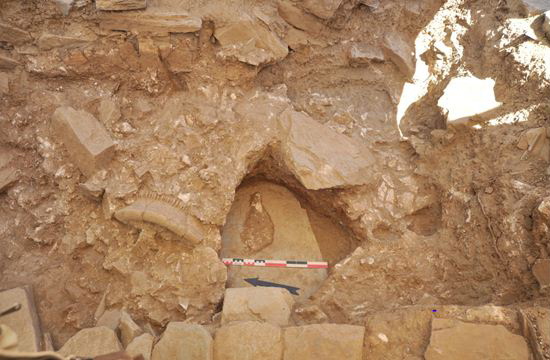 The excavation goes on at the SE corner of the room where the limestone slabs have been removed. Several pieces of plaster were also removed. Many of them bear red, black, grey and blue colors. The conical cup that was found last week was removed and a large piece of a pithos rim was unearthed (fig.1). A peculiar slab was unearthed as well, which may be part of a staircase (fig.2).

We continued clearing the plasters lying along the S wall. Many pieces bear red and black colors. Some slabs from the paved floor of the 1st floor were also unearthed (fig.3).

We continued removing the 5th layer of soil and we proceeded to the 6th especially at the west and central part of the room (fig. 1). The number of limestone slabs revealed continue to be quite limited, while under some of these we uncovered sherds of a pithos that has obviously fallen from the upper storey of the room (fig. 2). Regarding the rest of the finds, we carried on unearthing fragments of plaster coming from the walls. Many of them bear colors, such as red (fig. 3), orange and black (fig. 4), as well as impressions of strings that divide the areas of different color (fig. 3). We also revealed an one-handed hemispherical cup as well as part of a quartz.

This is the third week that we continue investigating Corridor 10 with the purpose to move deeper and gradually approach the floor of the ground level. In total, we removed two layers, which can be conventionally in three areas: 1) this with large pieces of carbonised wood, including some cylindrical parts obviously derived from tree branches, 2) this with abundant charcoal flakes, and, 3) the area where there is no trace of charcoal or other burnt material. It is very interesting that at both layers we identified a great quantity of charcoal at the opening that leads to Area 26, indicating that that this burnt charcoal most probably derives from the wooden case of the door that existed in the past (fig. 1). Also, the cylindrical bits unearthed indicate wooden beams fallen from the roof or the floor of the upper storey (fig. 2). This is also supported by the revelation of numerous schist slabs, a material that was, and still is, commonly used for roofing and/or floors. It is also remarkable that at the south part of the trench the two removed layers revealed reddish clay soil and some formless clay objects, most probably indicating a fallen and destructed clay structure. A special find this week was a brazier that was found at the southwest part of the trench (fig. 3). We also found a burnt grinder. (fig. 4)
We also cleaned the walls that were gradually revealed in the previous three weeks. Especially at the east wall we thoroughly investigated part of it where it seemed that the courses of stones were not appearing, probably indicating an opening/window that was rebuilt/blocked at a later date. The cleaning however proved that the wall is well built, making the existence of an opening less probable (fig. 5). Finally, the mounting works at the east face of the north part of the west wall were completed (fig. 6).

See video: Mounting works at the west wall of Corridor 10

At the west part of Zominthos Central Building we had identified since 2009 the existence of a corridor that leads from the exterior of the building to the Area 19/28. The Corridor has an opening of 1.60 meters in width to Area 49, which is part of the larger Area 19/28 that has already given several finds, such as seals and figurines, as well as important architectural elements. One of the most significant finds revealed from the cleaning of this opening (fig. 1) was the rectangular lintel of the corridor (1.57m. X 0.80m. X 0.15m) (fig. 2). We also found the perfectly formed pivot of the door, which was used as a socket to support a wooden door (fig. 3). The large quantities of carbonised wood found in this area comprise the evidence  that a door existed there.

During the third week of excavation, we continued the work, initially at the west part of Area 28, at the interior part of two small parallel areas that are formed (fig. 1, 2) and are delineated by Walls B, E, Z, Z’ and H’. For those areas we have not get revealed either their foundation or the floor.  Yet, we have no clue about the use of those two areas, since the filling removed did not give anything characteristic apart from pottery, such as cups, a few animal bones, as well as some stones which might bear traces of pigments. We also cleaned the north Wall H, for which we managed to identify the connection of this part with the east side of Room 17 (Wall Θ’).

We also continued working at the eastern part of Area 28 (fig. 3), for which we identified the continuation of the north Wall Γ to the east wall of Area 28, as well as the base of the east wall and the east opening. From the interior of this area we collected about 60 fallen conical cups and some smaller vessels, some of which are intact (fig. 4). Also, part of a brazier, a juglet, legs of cooking pots as well as an awl made of bone (fig. 5). It is also interesting that we revealed many fragments of plaster, some of which bear red and black colors. We also found a bronze leg which seems that belongs to the figurine that was revealed last week. At the west part of the trench, we have also started uncovering the paved floor of the area.

We also started exploring two areas with clayish soil at the west of Wall Γ (Area 28) and to the north of Wall Γ (Area 19), which were exposed at the previous excavation season. At the first one, we removed a filling of black soil, which gave a large number of sherds as well as the paved floor (fig. 6).
Finally, we started removing part of the stone-mound which exists at the southeast part of Area 19 (fig. 7), with the purpose to explore the northeastern part of Wall Γ, as well as the respective part of the east wall. Also, to investigate the connection of Areas 19 and 28 with Area 26

In the second week of excavation in Area 26, we completed the surface cleaning and started excavating the ancient strata. An important point of our work was to remove numerous large stones, which are found all over the area, because of the tremendous destruction of the building. The southern part of the area is at the time the better to have been revealed and especially the opening to corridor 10 (at the southeast corner of the area) and the south wall of area 26 (figs. 1, 2). Our finds are almost only pottery. We have no complete vessels yet, unless a jar which was found in many pieces. We also found parts of a pithos.