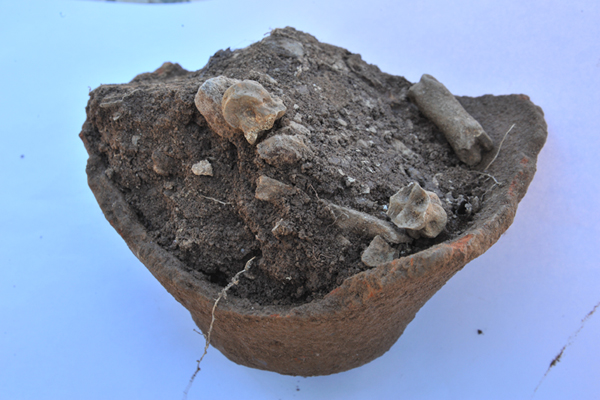 In the last week of excavation, we removed two more layers of soil, clearly exposing the walls that delineate Room 26 and 53 with the surrounding buildings (fig. 1, 2)

We also revealed the wall that divides the initial Area 26 in to two smaller areas – 26 and 53 (fig. 3). The wall has a strong inclination to both the north and south sides because of the earthquake and the pressures exerted by the adverse weather conditions during winter months. We also exposed an opening at the west part of this wall, indicating that Rooms 26 and 53 were communicating with each other. It is very interesting that at this opening, we unearthed three fruit stands, which may be related to some kind of rituals. In one of those, a few knuckle bones were revealed (fig. 4, 5). One of the most important finds revealed at the south side of the wall that divides the area is a bronze cup with a handle that bears three rivets and three incisions on its handle (fig. 6)

During the last week of excavation, at the south part of Area 19 (fig. 1), after the removal of a thin reddish-black layer with clay soil and charcoal, we revealed the paved floor consisting of schist and limestone. This layer was also exposed in most parts of Areas 19, 28 and 49, indicating the fallen floor of the upper storey, which was made of beaten earth, beams and reeds. At the level of the floor, we found several conical cups as well as a rectangular structure (bench?) (fig. 1) in contact with the south wall (Wall Γ), the foundation of which is below the paved floor. At the northwest part of the area, we also revealed part of the paved floor, we investigated the role of the two walls at the west part (Wall K and Wall Λ), as well as we revealed the extents in depth of Wall I, under which we might have a system for water runoff (fig. 2). Area 19 seems to be roofed by employing four draughts at its north and south part. At its northeast part, Corridor 16, probably with a few steps was leading to the upper floor. It does not seem to have an opening at the ground floor. The north part of Area 19, will be investigated in the next field season, by removing the stone-mound.

In Area 28, we revealed the paved floor (fig. 3), at the central and east part. After a test trench, this seems to continue at the west part, and at least Areas 54 and 55. It is not at the same level because of the destruction in some areas. The most important finds have fallen from the upper storey, which seems to be a place of some kind of worship, in contrast to the ground floor which seems to be used for everyday activities.

At the central and east part of Areas 49 (fig. 4), after removing the reddish-black thin layer of soil, we revealed in its greatest part a white layer of ash with several burned stones and without a paved floor. Only at the west part we exposed the paved floor, along with a great accumulation of carbonised wood, both on the surface of the floor and in it. At the northeast part we also investigated an opening, which seems to be a destructed part of the east Wall ΣΤ an was opened at a later date. Lastly, at the central and west part of Area 49, we investigated a low diagonal wall which was revealed last year. Along with a similar one, which both form a triangle, they are part of an unidentified structure. Inside this structure (fig. 5), we unearthed several vessels, animal bones and small pieces of carbonised wood. This structure might be a deposit.

Also, we continued investigating the interior of Areas 54 and 55 (fig. 6) by removing the fill, without however revealing either a paved floor or the foundation of the walls.  Most probably, there are storage areas of everyday use. In parallel to the excavation, we did some mounting works for the WallE (fig.7) which divides Areas 54 and 55, as well as the WallΘ, between Areas 55 and 17.

From the all these areas we revealed a large quantity of characteristic Late Minoan IA pottery, such as conical cups, jugs and juglets, as well as fragments of cooking pots and pithoid jars.

The last week of excavation concluded with the removal of two more layers of soil in which the picture we get is relatively the same with the overlying layers. We continue unearthing large quantities of carbonised wood, especially at the north and central part of the trench. Of particular importance is a big piece of carbon that seem to come from a large wooden element of the building, possibly a wooden framework (fig. 1), as well as small cylindrical pieces which most probably belong to reeds and straws used for the roof and/or the floor of the upper storey (fig. 2). In the removal of those two layers, the sherds revealed are quite fragmented because of the clayish soil and the humidity of the soil. There is a chance however, that the fragmentation of the sherds is intentional, since it is a common practice to use pottery fragments either in the joints of the walls, or most probably, at the composition of the beaten earth used for covering the floors. Among the finds, there is a fragment of a communion cup, as well as several other quite fragmented vessels, mainly cups (fig. 3). We also unearthed two milk jugs, one of which is intact (fig. 4, 5). We also realized that the pithos revealed last week is not intact and it seems not to continue in the lower layers (fig. 6). Therefore, it was removed. It should be also mentioned that at the south part of the trench, where the clayish soil and the pieces of clay were revealed in the overlying layers, we sporadically revealed lepidha earth (hard-packed gray clay), which most probably belongs to the structure of the floor of the upper storey. Under one of those areas with lepidha earth, we also revealed white plaster (fig. 7) probably indicating that both those elements were used for the floors (white plaster might have been used for the joints of the schist slabs of the floor or most probably to augment and seal the wooden beams and reeds employed in the construction of the floor). Lastly, the mounting works at the east and west walls of the corridor were also completed (fig. 8, 9). The excavation concluded with the removal of 12 layers in total, reaching about 30cm above the floor level as it has been revealed in the excavation of the north part of the corridor (fig. 10). This means that for next year we should move downwards, to the so-called floor level, which is the layer that usually gives large quantities of finds, mainly pottery, fallen from the upper storey and the neighboring buildings.

During the last week of excavation, we removed one more layer in Room 9, reaching about 1,45 m. from the surface of the trench (fig. 1). Because of the great quantity of colored frescoes revealed, we continued downwards rather carefully. Last week, we mentioned that the frescoes are mainly concentrated at the southwest and the central part of the room. This week, we continued exposing more pieces, covering the whole surface of the trench, being in several cases quite dense (fig. 2).  Among those pieces, there are several that bear red and black colors. There are also some pieces which are more sophisticated in contrast to the rest. For example, there is one with a red band which is divided with a string by a white band (fig. 3), a white band on a string’s impression that divides a black from a red surface (fig. 4). As well, a piece decorated with a black band between a white and a light blue surface (fig. 5). One of the most interesting pieces is a part probably coming from the finial of a wall, also bearing decoration with a curved black line on white background, which could be part of a pictorial theme (fig. 6)

The excavation concludes in Room 9 for the current field season. Across the south wall of the room, we left in situ some more fragments of frescoes, as well as part of a pithoid jar at the southwest corner (fig. 7), which will be removed in the next year. We should also mention that after cleaning the soil from the interior of the rectangular structure at the northeast corner (fig. 8), we identified that its south side reaches the east wall of the room.

The excavation goes on at the Southeast corner of the room where the slabs have been removed. There were 6 layers of soil completely removed (fig.1). As well, several pieces of plaster were removed, many of which bear black, blue, red, οrange and yellow colors (fig.2). Of particular notice is a piece of white plaster with black dots on it (fig. 3). In addition, two conical cups were unearthed and removed (fig.4, 5).

The excavation continues at the central part of the room with northwest direction, in which several pieces of plaster bearing black, red (fig.6) and orange colors were also removed. Furthermore, the window on the north wall was cleared of the rubble (fig.7). During the removal of the last layer, traces of fire are attested together with some animal bones and pieces of a semi-conical cup at. The layer was removed except from a small part at the northeast corner (fig.8).