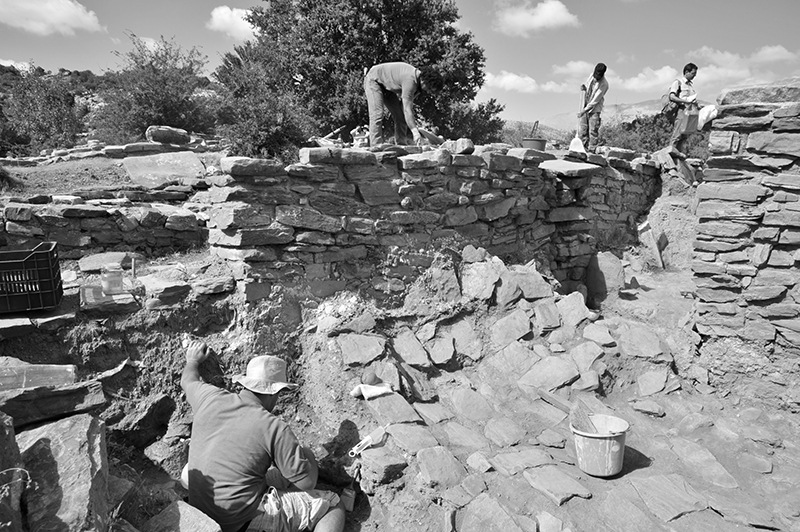 The excavation in Room 7 continued with the in situ conservation and extraction of numerous plaster fragments, which cover the room floor. Beneath those, a relatively large plaster surface that still stands on the eastern wall of the room was revealed (fig. 1). At the same time the removal of the fallen upper floor began (fig. 2-3). Underneath, there is a layer of lepidha-earth, a mixture of crushed clayish blue schist and, usually, river sand, used for waterproofing purposes, and below that a thicker layer of clay earth. These layers were partially excavated and large limestone slabs were found, which most probably comprise the ground floor (fig. 4). Furthermore, part of a bench of low height was found along the northern wall, and at the northeastern corner of the room, another shorter and higher. These are still to be investigated.

The excavation in Room 8 first dealt with the unexcavated areas of the previous season. Firstly, the deposit around a large slab standing in vertical position at the northeastern corner was excavated (fig. 1), which proved to be some kind of hearth or temporary cooking spot. In front of the slab pieces of cooking vessel(s) were found, and behind it a deposit of burnt earth and many animal bones was found (fig. 2).

Then, the western and southern walls were cleaned from the layer of soil left on their sides, so as to reveal their structure. Mainly at the southwestern corner plastered surfaces, in red or orange colour, were found, while at the southeastern part, small schist (as well as some limestone) slabs were revealed (fig. 3) in an arrangement resembling that of the fallen upper floor found in Room 7.

Thereafter, the excavation of Room 8 continued in depth with the southeastern part as a starting point. Many fragments of plaster were found, among which, pieces with surfaces in red color. (fig. 3)

During the 2012 season, the excavation of Layer 7 was completed in the whole area of Room 9, apart from the southernmost part, along the south wall of the room, where a great concentration of fallen lime plaster fragments clearly intruding also in the lower Layer 8 was left in place to be investigated during the following season.

During this first week of work in Room 9, we begun with the excavation of Layer 8, which reached the central part of the room by the end of the week (fig. 1). Apart from a small quantity of pottery sherds, some animal bones and a small vessel (a conical cup), a great number of plaster fragments were unearthed in the whole area that was excavated, some of them with their surface painted red, orange or black. But the most interesting plaster fragments were revealed along the south wall, where we continued with the cleaning, conservation and removal of the concentrations of plaster mentioned above. The majority of these fragments were decorated with red, orange, yellow or black paint. In most cases the surfaces of the fragments bear a monochrome decoration or an alternation of bands painted with different colours (fig. 2). On some of them, however, more complex decorative elements, possibly pictorial, are being preserved, which at the time being cannot be defined more precisely (fig. 3-4). More painted plaster fragments were collected during the cleaning of the outer surface of the east wall of Room 9, which had also been left unexcavated during the 2012 season. The main goal of our work at the east wall of the room is to fully reveal its poorly preserved surfaces and restore them (fig. 5).

Corridor 10, which divides Zominthos Central Building into two wings, is excavated for a second consecutive year. The length of this corridor is about 17.5m., but it is highly probable that it continues towards the south part of the building, therefore possibly exceeding 35 m. Both the east and west walls of the Corridor have an inward inclination, providing a good indication about the strength of the earthquake. As the excavation proceeds, we reveal large quantities of carbonised wood and burnt earth, indicating the level of destruction of the building by fire. It is probable that such quantities of wood came from the wooden floor and the wooden beams of the first floor. Among the most characteristic finds, are conical cups, a dish and a stone grinder. Many of them were found reversed due to their initial position, probably on some shelves.

This room is a corridor in the axis E-W, connecting the main corridor of the Central Building (C. 10), with the northeastern part of the building. A large number of stones, fallen from the upper structure, and a large volume of dirt have been already removed, however without any significant finds. (fig. 1-2)

The excavation in Area 26, which started last year, continues in the new excavation season in order to reach the level of the ground floor. In 2012, the excavation revealed three fruit stands in the area between Rooms 26 and 53 and a bronze vessel at the northeastern part of Room 26. In the first week of excavation, we removed two layers of soil (fig.1). Pottery is scarce while there are large quantities of schist slabs, as well as traces of carbonised wood, burnt soi and lepidha  earth (hard-packed gray clay).

These finds indicate that we are probably excavating the level at which the floor of the upper storey fell, since they are all materials normally used for their construction. The most important find this week was a large bronze pendant found below the area (fig. 2) where the bronze vessel was revealed last year.

Also, along with the excavation of Room 26, we investigated the opening to Room 28 (west of R. 26), which seemed to be intentionally blocked. It is very interesting that in contrast to Room 26, where pottery is scarce, the opening to Room 28 revealed 10 whole vessels (conical cups and two juglets), a stone grinder, as well as several sherds of fine quality pottery definitely forming 4-6 more vessels (fig.3, 4). The interpretation of this accumulation of finds at the south part of the pilaster is that the vessels fell from somewhere above and when the opening was blocked, the vessels were blocked at this spot.

Area Outside the North Facade

During the first week of the 2013 season we begun the investigation of the area to the north of the north facade of the central building with the aim to reveal parts of paved areas mentioned in the preliminary reports of the excavation seasons that brought to light this facade in the 1980s, and also other architectural elements such as a possible terrace or room in the western part of the area, indicated by the results of the geophysical prospection that took place at the beginning of this years’ season.

A surface cleaning of the whole, relatively flat area along the entire north facade of the building took place (fig. 1), and indeed two paved areas were revealed just outside the middle part of the facade (fig. 2). Then we started excavating the western part of the area, to the north of Rooms 11 and 12, where a large part of Layer 1 was removed (fig. 3). Many pottery sherds and bone fragments were found there, as well as three conical cups (fig. 4). With the removal of Layer 1 the upper surface of an undisturbed Minoan deposit is being revealed, which apparently contains large quantities of pottery