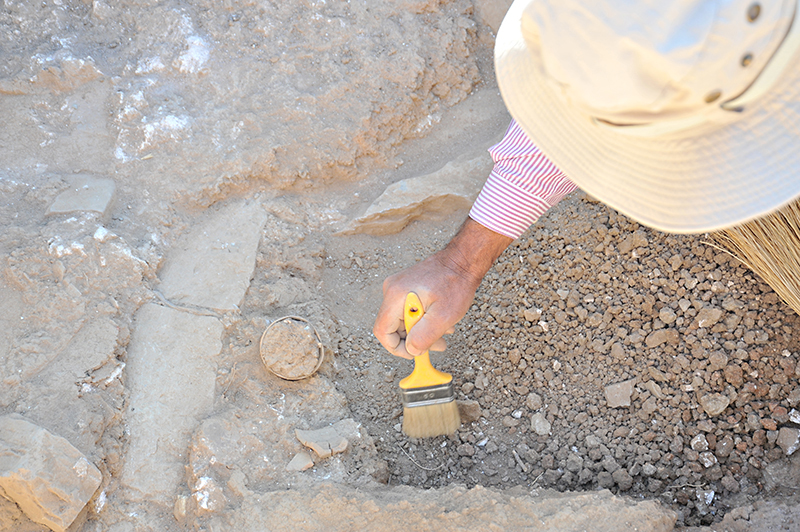 Room 6, being at the eastern end of corridor 21 is another short corridor, though not aligned with it. The excavation has revealed the corner formed by the north walls of Rooms 21 and 6, but not yet the western end of the south wall (fig. 1). 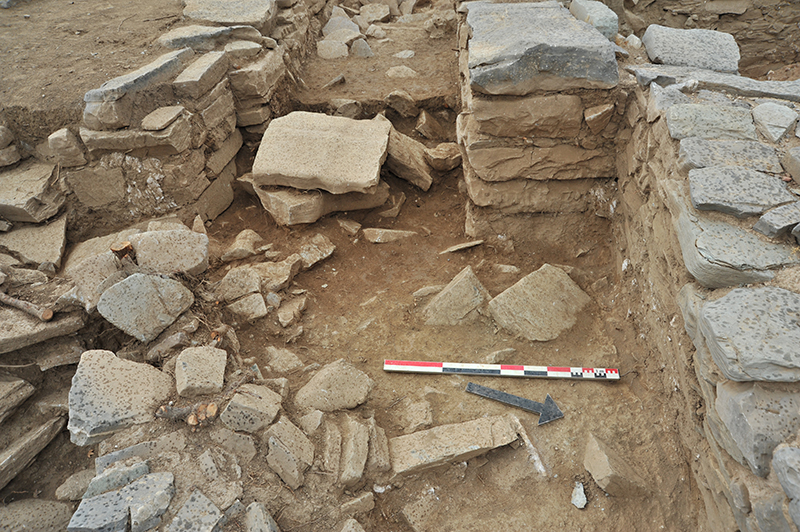 Room 7 has produced a fine example of stratigraphy of the fallen upper floor structure, which seems that fell directly above the ground floor. On top of the large limestone slabs of the ground floor, there is a thin layer of clay, then a layer, varying in thickness, of lepidha-earth, and then a thick layer of clayish earth. Inside the latter pieces of plaster bearing prints of structural elements of the upper floor structure, such as stones and wooden beams, were found.

By removing these layers, the ground floor was revealed (fig. 1) along with two small benches and a layer full of burnt wood at the northern part of the room. As well, concentrations of various pieces of plaster, some of which had colored surfaces (fig. 2), some small vessels (fig. 3), and also a deer horn (fig. 4).

Fine, usually colored plaster surfaces keep coming up all around Room 8. Some interesting features were found along the northern part of the room; a number of charcoal pieces scattered in front of the window possibly belonging to its wooden frame;. Also, some conical cups were found, some of them being inside each other (fig. 1). Lastly, a large concentration of various pieces of plaster at the northwestern corner, covered with a crust of solidified salts. At the same area, a very interesting find was collected; a conical foot from an offering table made of plaster. 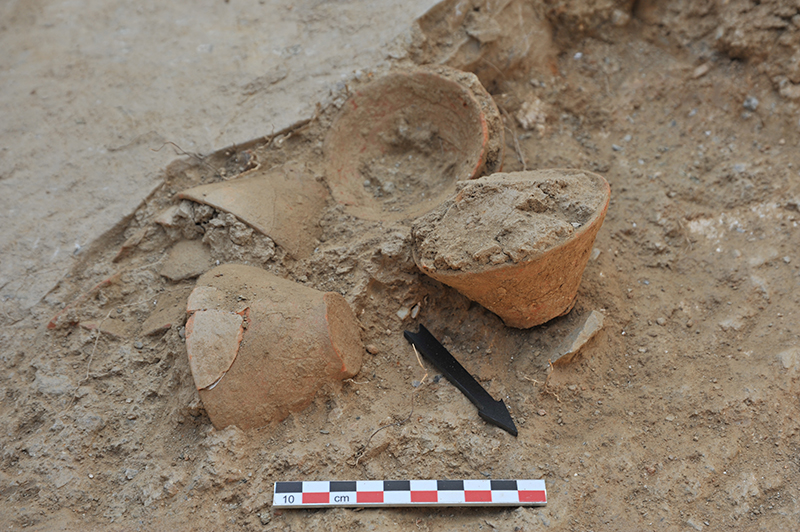 The walls continue to be revealed, as more and more stones and dirt are removed. These are a loose fill, due to the collapse of the upper structure (fig. 1). 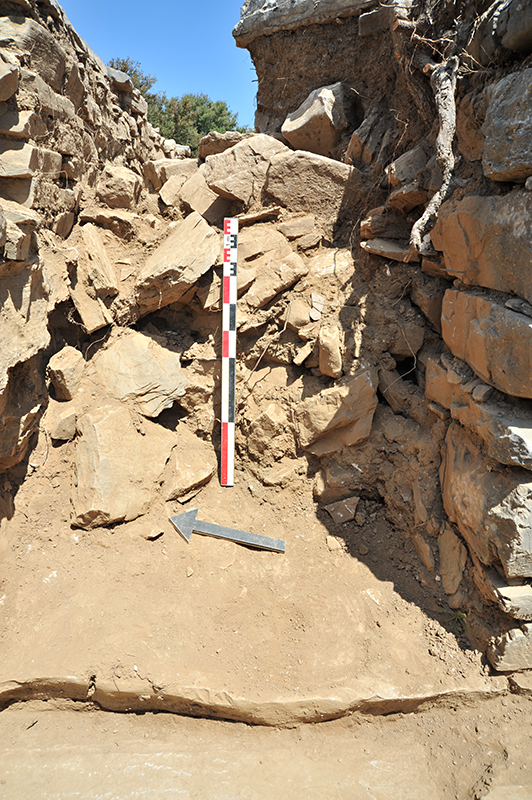 At the western end of this room a structure that explains the reason why corridors 21, 6 and 22 are not aligned is expected. Still, although there are some stones which could belong to a structural feature, nothing else has been revealed yet.

15-19.7.2013
At the beginning of the third week, we removed in Room 9 a small portion of the 8th layer of soil that remained unexcavated at the SE corner (fig. 1). Then, we proceeded with the excavation of Layer 9, which was completed in the whole area of the room apart from the SE part of it. Along the east wall three more vases came to light,i.e. two conical cups and an intact small jug (fig. 2), as well as some fragments of carbonised wood. The rest of the finds consisted again wall plaster fragments, although their quantity was radically reduced in comparison to previous layers. Most of them were collected in the western and southern part of the room, while some bear a painted decoration, such as black bands on an orange background (fig. 3). The most interesting find of this week was an architectural element that came to light in the western part of the room, along the opening of the SW doorway which leads to the adjacent Corridor 10 (fig. 4). It is the poorly preserved upper surface of a rectangular stone structure, possibly a bench. This structure was built there apparently after the SW doorway had been blocked. The blocking of this door has already been removed during the 2012 excavation season.

During the 3rd week of excavation we completed the excavation of Corridor 10. The paved floor was revealed along the whole Corridor which starts at the facade of the building up to 17.5m. towards the south, dividing the Building into two wings (east and west). It is really interesting that the paved floor presents great variations in its preservation due to the strength of the earthquake and the stones that fell from the upper storeys and the adjacent rooms (Fig.1). 30 vessels were found in total, a few of which were intact. The rest were found in fragments but are currently being conserved by the conservators of the project. Among these vessels, there is a fruit stand, five jugs of various types, as well as several conical cups (fig.2). Lastly, a shell was found as well as pebbles possibly coming from the sea or rivers which might have existed nearby (fig.3).

3rd Week (15/7/2013-19/7/2013)
During the third week of excavation, we started removing the fallen stones at the eastern part of Area 19, probably belonging to a staircase (fig. 1) unearthed in the previous seasons. The work in this area aims to reveal the paved floor as well as to clear its northern part, which is still covered under debris. This probable staircase, was possibly connecting the ground floor with the upper storey through the opening revealed at the east of Area 19. The big flat slab belonging to this structure is rather impressive. We have decided to leave this slab in situ. This area is gradually cleaned from the fallen stones (fig.2), revealing a great quantity of pottery, most of which in sherds: conical cups (fig.3), cooking vessels, pithoid jars with characteristic decoration (fig.4) and part of a fruit stand.

Also, we started removing a layer of earth at the west part of Areas 19, 28 left in the previous excavation seasons in order to reveal the rest of the paved floor that was unearthed last year in Area 28. The excavation at this area, reveals great quantities of burnt – black soil, ash and carbonised wood. The paved floor is gradually revealed (fig.5) along with great quantities of pottery for everyday use and animal bones.

12/07/2013-19/07/2013
The excavation of Room 26 continues for a third consecutive week. Among the most important elements that the excavation revealed is the stone bench-like structure located at the east of the opening to Room 19. Apart from that, the excavation of the trench did not give much in terms of finds, since pottery is scarce. The soil of the trench can be distinguished in two areas: 1) From the east side of the bench and across the north wall of the room towards the east wall. This area has red, clay soil with some charcoal remains, probably fallen from the floor of the upper storey; 2) The rest of the trench, which has normal brownish soil and charcoal remains.
In parallel to the excavation of Room 26, Room 53 is being investigated. In this room as well, pottery is scarce (probably a bit more in comparison to R. 26), while it is really interesting that what has being excavated is a deposition with a thickness of about 30cm consisting of reddish clay earth. This deposit most probably comes from the floor of the upper storey and is part of the deposit found at across the north wall of Room 26, as well as on the bench and the opening to Room 19.

Excavation proceeded in Areas 41 and 42 by removing the top of the debris that fills the rooms. The walls started to be revealed (fig.1), but their features (especially the doors of the rooms) are not certain yet.
Finally, we completely cleaned the area south of room 43 from the debris resulted from the looting activity in 1960s. (figs. 2, 3).

15-19.7.2013
During the third week of the 2013 season we continued the investigation of the area to the north of the north facade.  The excavation continued at the western part of the area, to the north of Rooms 11 and 12, giving many pottery sherds, a few bone fragments, over 60 conical cups, as well as an amphora and cooking pots (fig. 1). At the same area, the removal Layer 3, revealed the upper part of a wall, probably one of the two that were indicated by the geophysical prospection (fig. 2). At the same time the excavation of Layer 2 in the central and eastern part of the area, in front of Rooms 7, 8 and 9 (fig. 3),  revealed a pavement, and also a few sherds and bone fragments.