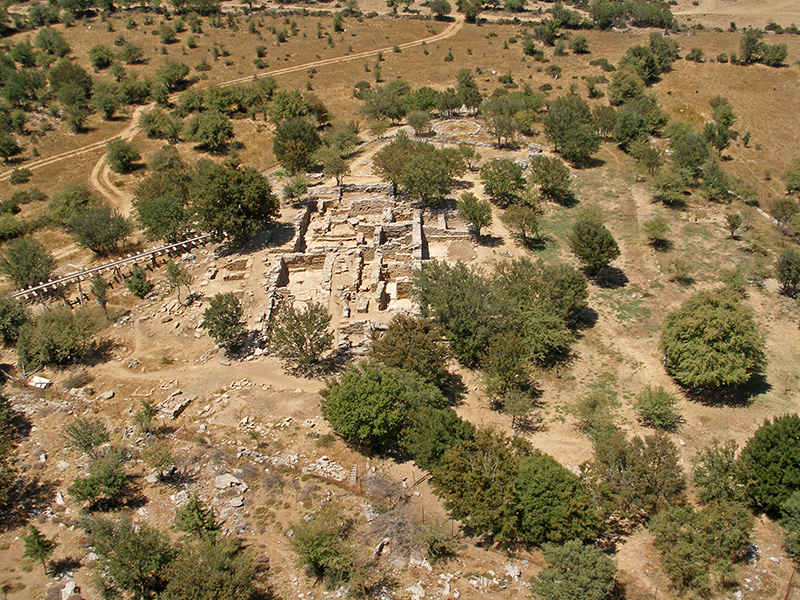 The excavation of this room was completed this week. Room 8 has a fine floor of large limestone slabs (fig. 1) and plastered walls (fig. 2). A great quantity of plaster pieces was removed, along with more than thirty cups. Charcoal pieces kept appearing in front of the window, denoting a wooden frame there that burnt. The most interesting feature was the presence of petrified salts along the northern wall, which had formed a crust at the northwestern corner. These must have been the result of a leak inside the room, from where water entered. Inside the crust a large number of surfaces and bands of various colors (white, red, black, blue, orange, pink) was found. One of them stood out; a blue surface with parallel black curves, probably part of a spiral (fig. 3).

During the last week of excavation in Room 9 the revealing of the last great concentration of fallen fragments of wall plaster of Layer 10 was completed in the SE corner of the room (fig. 1). With the removal of these – partly decorated – fragments of plaster we completed the excavation of Layer 10 and then we proceeded with the excavation of Layer 11, which was completed in the whole area of the room (fig. 2-3). The removal of this season’s final layer in Room 9 brought to light in the northern part of the room its floor pavement, partly consisting of great limestone slabs of the kind used for the paving of the floors in the adjacent Rooms 8 and 7 and lying at the same level with them (fig 4). It is an interesting feature that the pavement came to light only in this area of the room. In the rest of it, i.e. in the area to the north and east of the built structures that are dominating the central and SW part of Room 9, no such pavement came to light, while it is worthy to note that the stone structures are lying at a slightly lower level than the slabs (fig. 2-3). These stone structures, perhaps the most interesting find of this season’s excavation in Room 9, are consisting of a kind of oblong platform or bench along the SW door (which was blocked at the time of the final destruction of the building with stones that were removed during last season’s excavation) and the southernmost part of the western wall, with two more built features attached at a slightly lower level to its eastern walling: a poorly preserved rectangular structure in the northern part, and a small staircase in the southern part, along the south wall, consisting of three steps and a slab used as a kind of threshold at its lowest end (fig. 2-3). The almost complete absence of notable finds associated with these structures make their interpretation particularly difficult, however, a cultic one cannot be excluded. Perhaps their use is related to the use of the other enigmatic built feature that has come to light in Room 9, namely the tall rectangular stone structure of the NE corner (Fig. 2-4, 6). Some features associated with the lowest level of the latter, such as the arrangement of the paving just outside the base of its western walling and a narrow opening just above the base of the same walling (fig. 4) point to a use perhaps related to water. Although apparently the last earth layer above the floor of Room 9, Layer 11 was surprisingly poor in finds – even the usual pottery and bone fragments were scarce. Apart from 7 conical cups that came to light in the paved area along the north wall and a semiglobular one found just outside the opening of the NE door of the room (which still remains unexcavated, fig. 6), the rest of the finds were a few pieces of charcoal and some, mainly small, plaster fragments, a few of which were decorated with orange, red or black paint.

After the removal of the fallen stones in Room 19, the paved floor consisting of schist slabs was revealed in the whole area. The big limestone slab fallen from a staircase that was leading to the upper story was left at its original location (fig. 1). As mentioned already, Area 19 was a very important space as this was a light well. All its walls are standing on the paved floor.

Also, we did some further work at the northwest corner of the Area, where, last year, we had unearthed a wall which had a layer of white ash on its surface (fig. 2). This wall is preserved only at the level of its foundation and is lying on two slabs forming a Π. It seems that it is a feature for water runoff (fig.3).

Also, we continued working at the west part of Room 28 (fig.4), and particularly around the wall revealed this year (fig.5) under the level of the paved floor. Two courses of stones were revealed, without however being able to identify its foundation. Black soil and white ash continues to be unearthed (fig.5), while at the greatest part of the west side of Area 28, the paved floor has been destroyed or subsided. Along with the new wall, 3-4 limestone slabs were revealed at the same spot (fig.6), which are located in line with the wall and the structure for water runoff. Both the channel for water runoff and the two walls mentioned above, seem that they were constructed earlier than the paved floor.

Lastly, we started cleaning the southwest part of Room 47, located at the southwestern corner of the building.

Among the finds, there are several conical cups, a rim of an open coarse vessel, probably of Early Minoan period found at the surface of the structure for water runoff.

During the last week of this year’s season we continued investigating both Rooms 26 and 53. In Room 26 we revealed the paved floor while the biggest surprise was a cylindrical column base positioned on a rectangular platform at the middle of the room. It is very interesting that it preserves the charcoaled remains of the wooden column. This is a very important piece of evidence since it provides an indication about the approximate diameter of the column (fig.1). In our case, it was at least 26cm. The paved floor made of large size slabs was completely exposed, which however is located at different levels because of the subsidence of the ground and the earthquake activity that destroyed the building in the Late Minoan period (fig.2). The bench at the west side of the room has been also completely revealed, while a stone fallen from its southern part has been put and mounted in its original place (fig.3). The floor of Room 26 does not give any special finds or intact vessels, while sherds come from different types of pottery both fine and coarse.

The excavation also continued in Room 53, where we also exposed the paved floor. The removal of a layer of soil at the north part of the room indicated that there is another bench at this spot (across the north wall of the room) with a height of 30cm, as is the case with the bench located across the west opening of Rooms 26/53. This bench was also plastered in white color (fig.4), while some remains of blue plaster on the wall behind the bench, might indicate that there was a strong color difference between the wall and the bench. Among the various finds there is horn of a wild goat possibly fallen from the top of the bench (fig.5). There were also two areas of major importance in this Room. Firstly, we decided to investigate the area under the northern part of the bench, since we realized that it was not built in courses, but in such a way so as to create two niches. The right niche had a stone grinder. The left niche had a conical cup and an unexpected find. This was an offering table made of stones which bear various symbols, some of which are also attested in Linear A (fig.6, 7). Lastly, we investigated an area of burnt soil at the southeastern corner of the Room, in which there was a great accumulation of conical cups and various other vessels (ewer, juglets, kalathoi etc.), along with many burnt bones, several tusks of boar, some pebbles and a shell (fig.8, 9). In this accumulation there was a burnt offering table as well. Definitely this accumulation is not coincidental, especially considering the two offering tables and the metal objects found next to it. It could possibly be some kind of an altar, which however is not in its original location, but fallen from a higher level.

Finally, we cleaned the openings that lead from Room 53 to Room 20 (staircase), which were also partially excavated in 1980s and 1990s. Both openings revealed their thresholds which also bear shallow pivots for the wooden doors. At the northwestern part of the Room, the rest of the pithos found in late 1990s was exposed and removed, and three stairs belonging to the staircase leading to the upper story were revealed (fig.10).

The last week of this year’s excavation was the most important for Room 41. At the north edge of the western wall, a small vertical recess/‘niche’ was revealed (fig.1, 4). The ‘niche’ was constructed on the upper half of the wall, next to the NW corner. Below the ‘niche’, we found a narrow opening which passes through the western wall. Nine fallen conical cups were found inside the ‘niche’ (fig.2). On the walls of the Room, traces of destroyed white plaster were revealed. Just outside the lowest part of the ‘niche’ (at about the height were the lintel of the wall’s opening is), we found a fragmentary baggy alabastron (fig.3). Another important find is a bronze tool with barbed edge (fig.5).

In Room 42, we continued going deeper, however only a few sherds were collected.

In Room 43, a loom weight was unearthed, which is the only find apart from pottery, which is also scarce (fig.6)

Area Outside the North Facade

During the fifth and last week of the 2013 season we continued the investigation of the area to the north of the north facade of the central building. At the western part of the area, to the north of Rooms 11 and 12 the excavation continued, in the two rooms that were already revealed during the excavation of Layer 3 (fig. 1). Layer 4 in the northern Room 56a gave many pottery sherds, a few bone fragments, conical cups of various sizes and a lamp (fig. 2). The excavation of Layer 4 in the southern Room 56b revealed one more wall and probably an entrance. It also gave parts of rock crystal (fig. 3 and 4), a dagger (fig. 5), many pottery sherds, conical cups of various sizes, parts of pithoi and cooking pots and a few bones.

In the last week of excavation we also took aerial photographs of the site and of individual areas of the building. The method used was a custom-built helicopter on which a compact camera was attached. The helicopter was flying by a remote control and the photographs were previewed in real-time via a small screen.