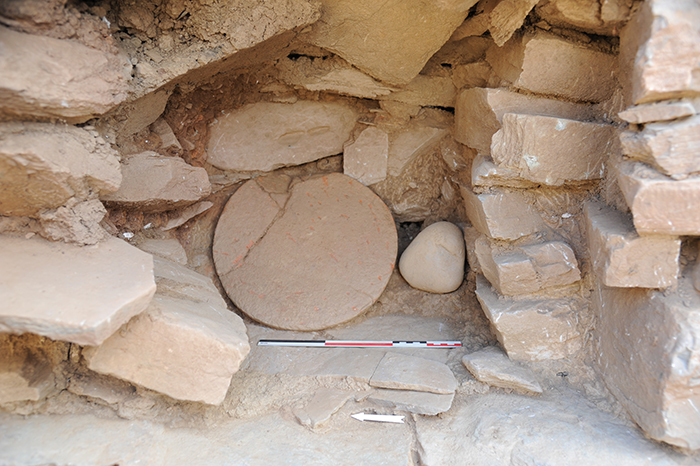 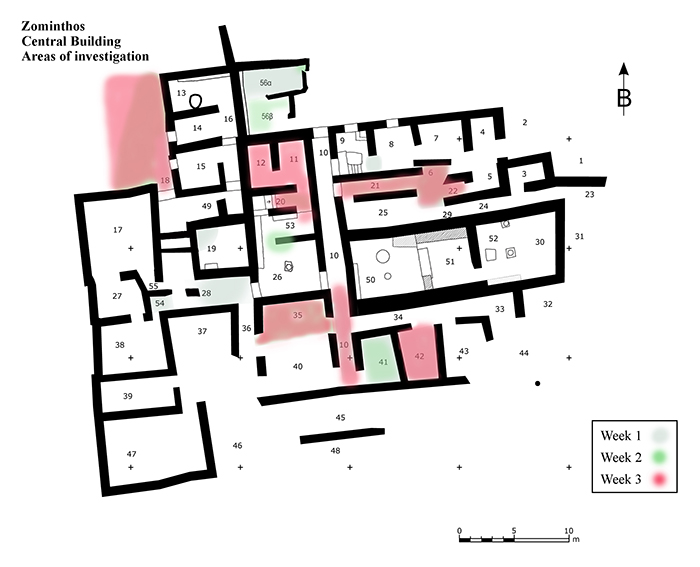 By the end of the third week (4-18/7/2014), most of the southern part of Corridor 10 has been excavated and the investigation has almost reached the already excavated northern part (fig.1). Big stones that are found in the area are fallen from an upper floor. The rich finds in pottery, seal-stone and elaborated animal bones reveal significant information about the social structure of Zominthos’ residents. In particular, a seal-stone was found showing a creature that combines female characteristics (body, legs) with that of a bird (wings, beak) (fig.2). Lastly, a bone pin is an excellent example of exceptional small-scale craftsmanship and is added to the many high quality finds the site has produced (fig.3).

At Corridor 18 the excavation of the fourth layer continued (fig.1). Some big size stones were removed and several small and middle-size pottery sherds were collected, among which parts of conical cups and storage jars as well as a few small-size animal bones. The research of the Corridor is proven difficult because of the many large stones fallen into it. At the area west of Room 13 the cleaning of the wall that was found inline and on the west of the north wall of Room 13 was completed. The wall is leaning towards the north (fig.2). Layer 2 was excavated. At the area west of the Corridor the removal of the surface layer was completed. It produced a big amount of coarse pottery sherds with more the most characteristic being some big pieces from pithoi. Also, several animal bones were collected. Finally, the first layer of the eastern part of this area was excavated. Big stones were unearthed that possibly came from the western wall of Corridor 18 (fig.3).

At Room 6 two layers were removed this week (fig.1). Plaster fragments with red surface were collected, some bigger pieces of plaster with imprints of wood on their inside surface as well as very few pottery sherds. The investigation of Corridor 21 continued this week with the removal of 2 layers from the whole of its surface (fig.2-3) and of a third one from its western part. Pottery sherds, bones, carbon pieces and plaster fragments with surfaces of red and white color were found. Furthermore, 2 piles of bones were located as well as 2 small piles of carbon pieces. At Room 22 two layers were removed completely and a third one partly. A vertical wall was revealed (fig.4) extending from the northern wall of the Room to the southern. Pottery sherds, small pieces of carbon, big pieces of plaster with imprints of wood, fragments of plaster with red surface, a few bones and some conical cups came to light.

Room 11 is located on the north façade of the Central Building. It has one opening to the west and one to the south through which it communicates with Rooms 12 and 20 respectively. In its largest part it was already excavated during the 1980s and at its southwest part the paved floor of the room had then already been unveiled (fig.1). During that excavation, on the edge of the middle wall between Rooms 11 and 12 a big, broken pithos was revealed and left in situ (fig.2). During this week, the deposit covering the unexcavated surface of the room was cleared and the investigation of the eastern part of the Room started, where the previous research had stopped at a higher level than the rest of the surface. In addition to the works at Room 11, the deposit that filled Room 12 was removed. The excavation of Room 12 had been completed in 1990 (fig.3) and the room was filled with soil for its protection. Among the slabs of the paved floor of Room 12 and in part underneath them a stemmed conical cup (a so-called ‘eggcup’) of an earlier period came to light (fig.4).

This was the 2nd week of excavation at Room 20. Just on the east of the steps that remain in situ more finds were unearthed inside a burnt layer, a sign that the excavation is reaching the floor. Among them was the base of a large pithos and some deer horns (fig.1-2). Also, two more steps of the ladder were located in this area and will be restored to their original position in the future (fig.3).

At Room 53, where the excavation was concluded last year, a niche on the eastern wall was investigated situated in part inside the opening towards Room 20 (fig.1). The investigation was difficult due to the bad condition of the wall in that spot. Inside it some very interesting finds had been placed: three clay pots, among which the lid from a pithoid jar (fig.2, 4), a grinding stone (fig.4), a bronze tool of unusual shape (fig.3) and a bronze chisel (fig.5). It should be considered certain that several important finds that were collected last year from the area right beneath the niche were originally placed inside it and rolled out during the destruction of the building. It was a group of clay pots, stone tools and bronze objects, among which 3 bronze ritual double axes and a chisel similar to the one found this year.

The work at Room 35, in the south/southwest part of the Central Building, continued this week with the removal of two layers containing a big amount of fallen stones. In the northern part of the Room the greater part of a middle-wall was revealed (fig.1), the first traces of which had already been exposed during the previous week. It divides Room 35 into two separate rooms (fig.2): Room 35a to the South and Room 35b, towards the North. The exact boundaries of Room 35b have not been clarified yet. Inside Room 35b, along the northern wall of the Room, a clay construction, fallen and destroyed, can be detected even from the highest layers, as well as traces of lepidha-earth (structure material from the upper floor). Also, the possibility of an entrance between Rooms 35a and 35b in the western part of the room is being investigated. Among the finds a bronze nail was found. At Room 35a the western part of the southern wall was uncovered in whole (fig.3). It is 0.70 m. wide, made from well elaborated stones in a building technique different from the rest of the walls of Room 35a. Finally, in the western part of the Room, the possible entrance towards the neighboring Corridor 36 is also under research.

At Room 42 (fig.1) several layers were extracted offering a better view of the entrance towards Room 41. An amount of pottery was collected, some conical cups (fig.2) and a large pile of animal bones was located in the deepest layers of the southeast corner where the soil was in parts burnt.