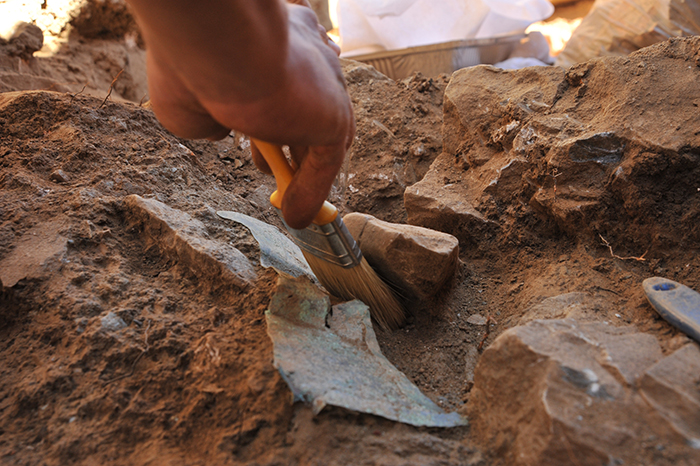 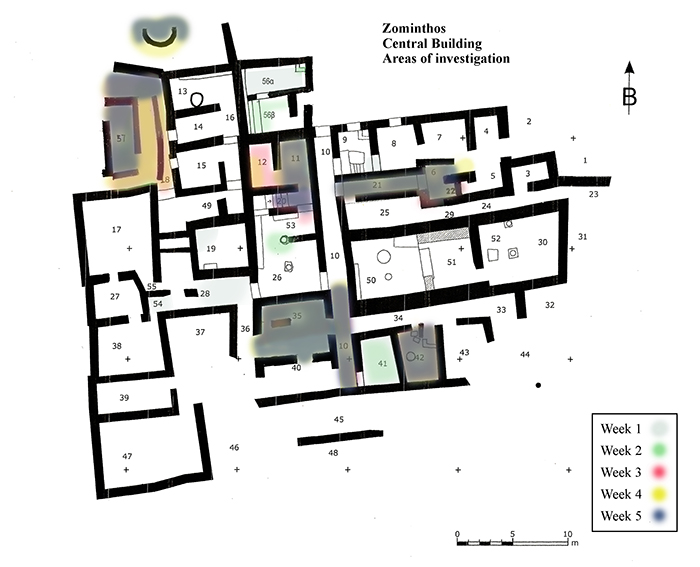 During the last week, the excavation of Corridor 10 was completed and the paved floor was uncovered. The length of the corridor is 25m and it has 7 openings leading to rooms of the East and West Wings of the Central Building. The traces of the earthquake that destroyed the building can still be detected in several spots through the broken stone slabs of the paved floor (fig.1). The most special find of this week was a bronze double axe 0.30m long (fig.2).

At Corridor 18 the investigation was completed. Its length is 9.68m and its width varies from 0.20m to 1.50m. The final layers produced pottery. During the cleaning of the walls at the northern end of the corridor an opening was discovered that seems to be the outlet of a drain (fig.1-2).

At Room 57 (dimensions: 5.8x3m) (fig.3) a large amount of pottery was found, mainly parts of pithoids, as well as animal bones.

At the area north of Room 57 and to the west of Room 13 the third and fourth layers were cleared. Many pottery sherds from middle and small size pots were collected and a grinding stone.

During the 5th week it became obvious that Rooms 6 and 22 actually form a complex, from now on Room 6/22, with a dividing wall in the middle. Two more layers were removed producing pottery sherds, a few bones and plaster fragments with red surface. Some big rectangular stone slabs were unveiled which cover mainly the northern part of the area’s surface (fig.1).

At Corridor 21, in the last day of the fifth week, the paved floor was cleaned (fig.2).

At Room 11 the excavation of the final layer was completed and the paved floor was uncovered in the southern half of the room (fig.1) and in most of the northern half, where the bottom part of one more pithos was revealed in the northeast corner (fig.2-3). The objects that were found fallen on the floor were mostly small-size pots, mainly conical cups and miniature jugs (“milk-jugs”), They came to light in the corners of the room and along the walls together with a lot of pieces of carbon (fig.2-4).

At Room 20 the investigation started again after a week’s pause. The finds that were already visible inside a layer of carbon above the floor were collected. Among them there was a conical cup a grinding stone and horns from deer. Next, the carbon layer was removed and the stone slabs of the paved floor below began to appear (fig.1). 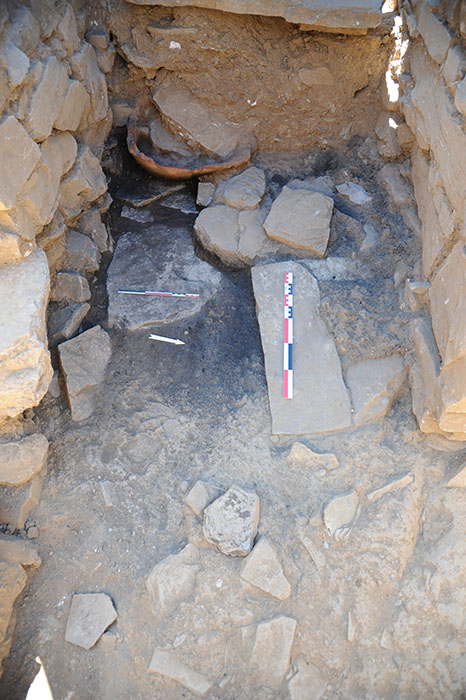 At the area in the north of the Ceramic Workshop (Room 13) the excavation of the pottery kiln in a horse-shoe shape continued to the north, where the other half of this ceramic structure started coming to light (fig.1). 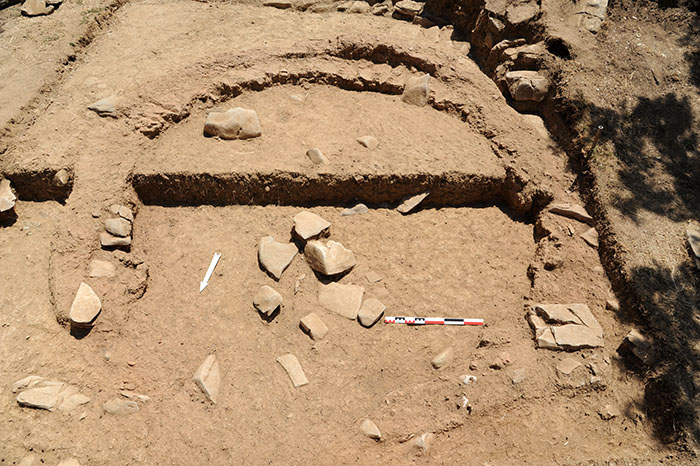 At Rooms 35a and 35b the investigation continued for the fifth week. Inside Room 35a (fig.1) two more layers were cleared. Several stone slabs were removed and a new part of the western wall was revealed covering the largest part of the opening that was uncovered in that area. Clay-earth continued to appear. In the center of the room, a solid construction of irregular shape made from clay-earth with traces of fire and pebbles on it and a few pots inside it was discovered.

In the western part of Room 35b, after the removal of three layers of clay-earth with traces of lepidha-earth, 6 steps were unveiled (fig.2) (approximate dimentions: 1.1×0.5m) leading to the upper floor.

Among the collected finds there was an incense burner(fig.3), a grinding stone, small pieces of rock crystal, fragments of white plaster, some of which may have traces of color on their surfaces and pieces from clay pots.

At Room 42 the investigation reached the paved floor and the base of a column was uncovered (fig.1). A large amount of pottery was collected as well as animal bones. Apart from several conical cups and a few small-size jugs the most interesting finds were a small bronze fish hook and a clay lamp (fig.2). They were discovered inside a stone structure in the northeast section of the room.