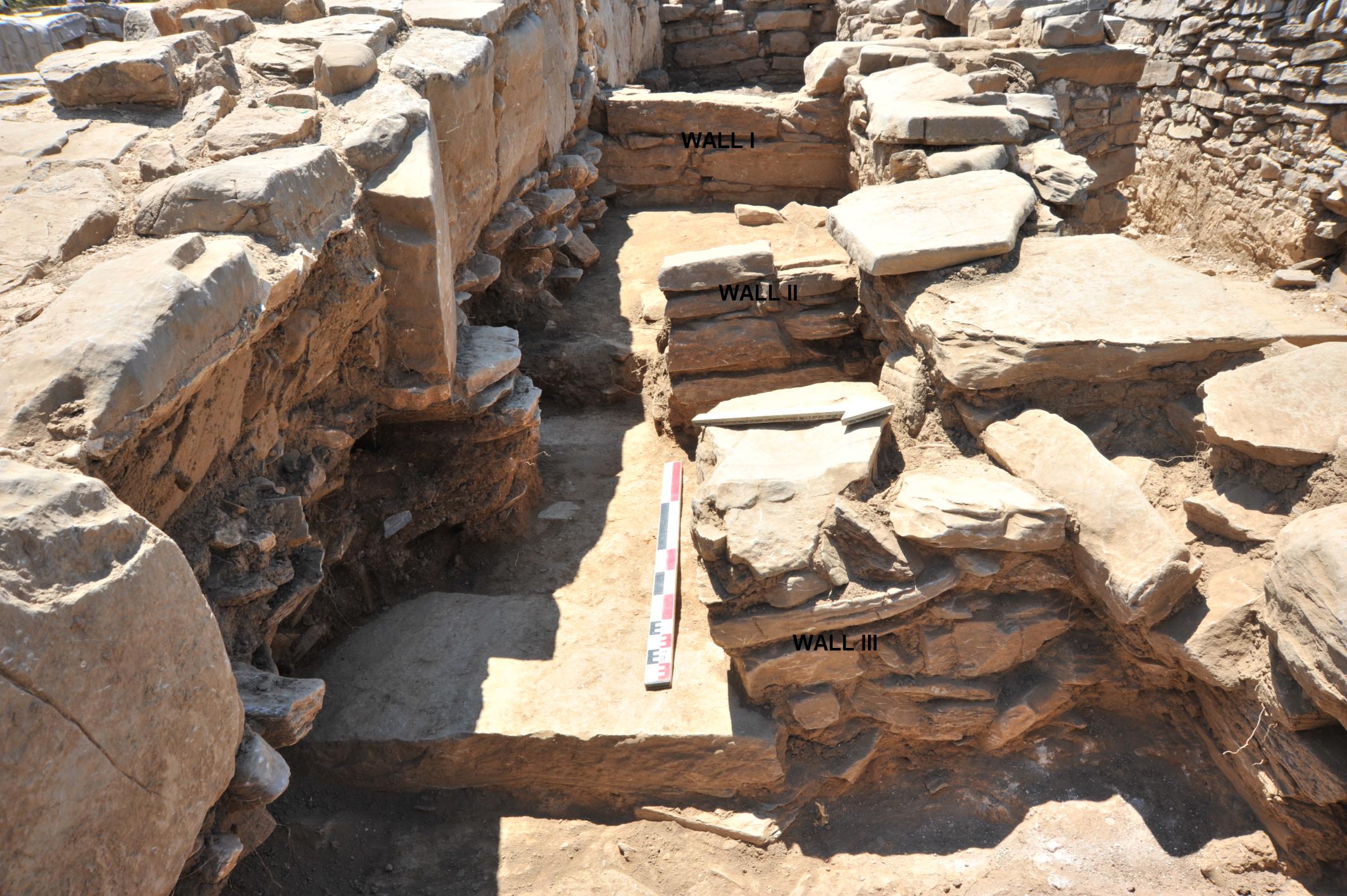 At Room 25 two more layers were removed. The soil was burnt, soft and wet. Slabs seem to continue deeper. Their position is in horizontal or oblique rows (fig.1).

An amount of coarse pottery sherds and animal bones was collected. A stone object of unknown use was also found.

At Room 29 the part at the east of Wall III and also the area in the western part of the Room between Walls I and II were excavated. Two layers were removed. Wall IV came to light, vertical to the northern and southern walls of the Room. Wall IV is situated to the east of Wall III and is possibly part of an extension to the north of the wall dividing Rooms 51 and 52. A layer of large stones was revealed covering the whole surface of Room 29 and continuing deeper.

During the excavation, 3 fragmented fruit-stands were discovered. Mostly coarse pottery sherds were found and some animal bones.

At Room 24 two more layers were removed. A layer of large stones was revealed spreading over the whole surface and continuing deeper. Two large trapezoid stones were located at the eastern edge of the Room. No new architectural elements came to light in the Room.

At Room 27 the excavation extended in depth without removing the finds of the layers 5 and 6 that had come to light along the southern and central part of the western wall. Layers 7 and 8 and part of Layer 9 were excavated (fig.1). Pottery sherds and bones as of others, was reduced in comparison to higher levels. They included some spread fragments of a small pithoid jar (fig.1-2), conical cups, miniscule cups and whetstones (fig.2). In Layer 9 fallen building blocks came to light (fig.1).

At Room 58, Layer 7 was removed (fig.3). More fragments were found of the small pithoid jar that had come to light at the central part of the Room, as well as parts of other pithoids, among which a particularly large one at the area of the southern opening towards Room 38 (fig.3). Small cups and a whetstone were also discovered (fig.3). Most of them are located at about the same height along the eastern wall. Part of the following layer (Layer 8) was also cleared at the opening towards Room 38 and at the southern part of the Room (fig.3). Of some interest is a large limestone slab horizontally placed at the area of the opening that seems to maintain its original position (fig.3).

The investigation continued at Corridor 34 for the 5th week (fig.1). An amount of pottery was collected, a few plaster fragments bearing orange-color decoration and fragments of a pot, maybe a pithoid.

Of great importance is the discovery of a large polytheron with two entrances (three casings) that connects Corridor 34 with Room 51 (fig.3). The polytheron came to light during the clearing of fallen building blocks from a part of the northern wall of the Corridor (fig.2). Apart from pottery sherds, a few pieces of plaster were collected and a bronze oblong fragment, probably from a miniscule double axe (fig.4).

During the 5th week of the excavation at Room 35a to the south (fig.1), three more layers were removed that contained large concentrations of pieces of carbonized wood, animal bones and pots. At the center of the Room, a narrow wall (fig.2), that had possibly fallen from an upper floor, was fully uncovered. To the south of the small wall, a part of the paved floor of the Room was found (fig.3). Furthermore, the extension to the west of the large plaster surface (fig.4) that had begun to emerge during last week’s works along the southern side of the wall separating Rooms 35a and 35b was revealed. Many fragments of plaster bearing various colors and decorative motifs (fig.5-6) were collected from its interior.

At the northern Room 35b (fig.1) the excavation was concluded in the area of the western opening towards Room 35a and the threshold came to light (fig.7).

Among the finds, some intact conical cups were found, as well as parts of various pots, a horn from a small animal and part of a bronze ring bearing an incised scene (fig.8).

Three more layers were removed. A large number of medium- and large-size stones was removed that were randomly spread towards every direction and blocked the northern opening of the Corridor and the opening towards Room 35a (fig.1). The doorstep of the northern opening came to light as well as a part of the floor (fig.2). Large parts of carbonized wooden beams were located, that probably originated from the floor of a higher storey (fig.3).

At Room 37 one layer was removed. Pottery sherds, miniscule cups and conical cups were found (fig.4)

At the northeastern part of Room 37 a mass of clay-earth was located together with a concentration of lepidha-earth, confirming the existence in this area of a construction at an upper floor (fig.5).

At Room 57a the excavation was concluded with the removal of two more layers (fig.1). A large amount of pottery sherds was collected, a few schists were cleared, a few traces of fire were located and the foundation of the wall, which is an extension to the west of the northern wall of Room 13 (fig.2), was fully revealed.

At Room 57 only small scale works took place this week, including the removal of the very few fallen stones that emerged at the southern part of the wall and the cleaning of its walls. It is worth mentioning that at the southern part of the Room, in the area of the oblique wall, part of an egg-cup was found, confirming that the wall belongs to an earlier, protopalatial phase of the Room.