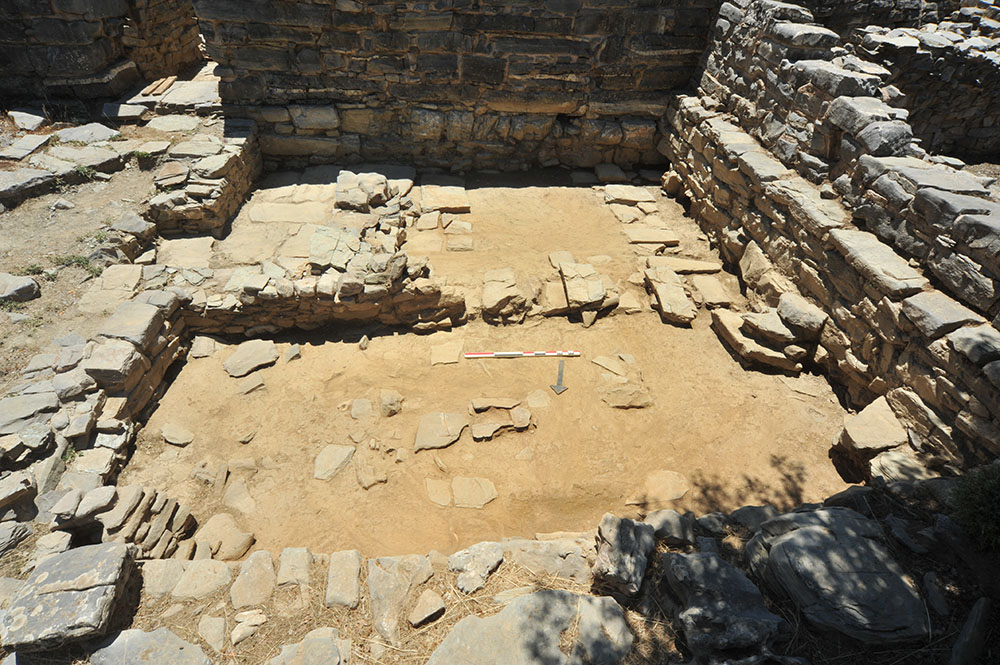 Room 29,24 is an oblong space leading to Room 25 towards the west (fig.1). The two Rooms are located in the eastern part of the Central Building. On the outer edge of the two Rooms some trapezoid stones arranged inline came to light, which probably belong to the eastern wall of Room 25 (fig.2). Inside the Room 25 several processed and unprocessed stones of various sizes were revealed, followed by a dense layer of medium size unprocessed ones (fig.3).

At Room 25 six layers have been removed and pottery sherds, some carbon and animal bones were collected. Pottery sherds of historical times were found inside the lower layers.

Rooms 27 and 58 are two neighboring rooms on the western part of the Central Building. Their excavation started this year, with the exception of the peripheral walls that had been cleaned earlier. Before the start of this season the two Rooms formed a single one, Room 27 (fig. 1). After removing the two upper layers, however, a N-S oriented wall was revealed, dividing the space in two separate ones that don’t communicate with each other (fig. 2). Room 27 has a door to the north, through which it communicates with Room 17, while Room 58 has a door to the south leading to Room 38.

So far, three layers have been removed in both Rooms (fig. 2). All the layers included a large number of building blocks fallen from the walls of the Rooms, some pottery sherds and bones. In Room 58, a conical cup, a boar tusk and a processed stone oval small disk with a hole were also found (fig. 3).

Corridor 34 is an oblong corridor in the southeastern part of the Central Building, which communicates with Rooms 42 and 43 through two openings. The large number of fallen building blocks (fig.1) spread on the entire surface of the Corridor, as well as the inclination of its northern wall, suggest a destruction caused by seismic activity. From the two excavated layers, apart from a small amount of pottery and animal bones, masses of plaster and a small polygonal piece of rock crystal were collected (fig.2).

During the second week of the excavation season, works in Rooms 35a and 35b (fig.1) continued from where they had stopped in 2014. These two rooms are located in the southwestern part of the Central Building, to the north of Room 40.

At the northern Room 35b, a staircase had come to light during last season. This year, work resumed in the eastern part with the excavation of the mass of the red earth in the northeastern corner. Twelve layers of brown clay earth with traces of fire were removed, together with many fallen stones and part of a carbonized wooden beam, elements that indicate the structural design of the upper floor. In the lowest layer, the ninth step (from the west) and the continuation to the east of the guardrail of the staircase were uncovered, as well as a large fragment of fallen plaster. Among the finds, a bronze double axe (fig.2), two bronze drills (fig.3), many fallen pots, among which a part of rhyton with a hole, whetstones and small pieces of plaster bearing decorative motives were found.

At the southern Room 35a the southern wall was fully revealed and the clay construction fallen from the upper floor, which had been left in situ since last year, was excavated (fig.4). It contained clay earth with strong traces of fire, gravel and fallen stones. Additionally, the removal of the first layer, of brown and red (clay) color, started. Several fallen pots and two whetstones were gathered among other finds. The excavation of the area will continue in the following weeks.

Corridor 36 is an oblong space in the southwestern part of the Central Building. It communicates through openings to Rooms 28 and 35a. The large number of stones randomly spread over the whole surface of the Room is an obvious trace of destruction due to earthquake. Four layers have been removed and a small amount of pottery, animal bones and stone artifacts were discovered (fig.1).

Room 37 is located in the southwestern part of the Central Building. Three layers have so far been removed. Many randomly fallen stones were uncovered. The southern wall of the Room has not yet been fully revealed. A small amount of pottery, animal bones and several stone tools came to light (fig.2).

Room 43 is a space with dimensions approximately 3,85×4,40m. A door in the northwestern corner leads to Corridor 34. The room was partially excavated in previous years (fig.1).

The first week of this year’s research (fig.2) revealed an internal wall opposite the door, at a distance of just 1,20m. The stratum being excavated contains materials from the destruction of the upper floor: a big amount of fallen stones, reddish soil, ‘lepidha’ clay and fragments of plaster decorated with red and dark blue color.

At Room 56, works on the wall dividing Rooms 56a and 56b took place, since it was thought that there was a polytheron under it. This supposition was confirmed when a new E-W oriented polytheron was discovered. It belongs to an earlier period than the rest of the Room and is connected to the polytheron of N-S orientation that was found during a previous research season (fig.1).

The works at Room 57 started last year continues this season.

Some fallen building blocks were removed mainly from the eastern part of the Room, while a large amount of pottery was collected, among which some parts of pithoid vessels. Furthermore, a small number of small- and middle-sized bones were found, as well as clay masses.

Finally, during the removal of the layer, stone slabs came to light which belong to benches located to the northeastern corner and the eastern wall of the Room. Other slabs, to the northern section, form part of the paved floor of Room 57 (fig.1,2).

At the beginning of this season, the process of revealing the pottery kiln continued with the removal of 8 layers so far (fig.1).

In the southern and western part of the area vivid traces of fire were located, while a piece of carbonized wood was collected (fig.2). Several fragments of clay earth were gathered, that belonged to the rack of the kiln, as well as a small amount of pottery, of which a miniature conical cup (fig.3), conical cups and some pot bases stand out. Also, in the northern part some fallen stones were discovered which belong to the pillar supporting the rack of the kiln.