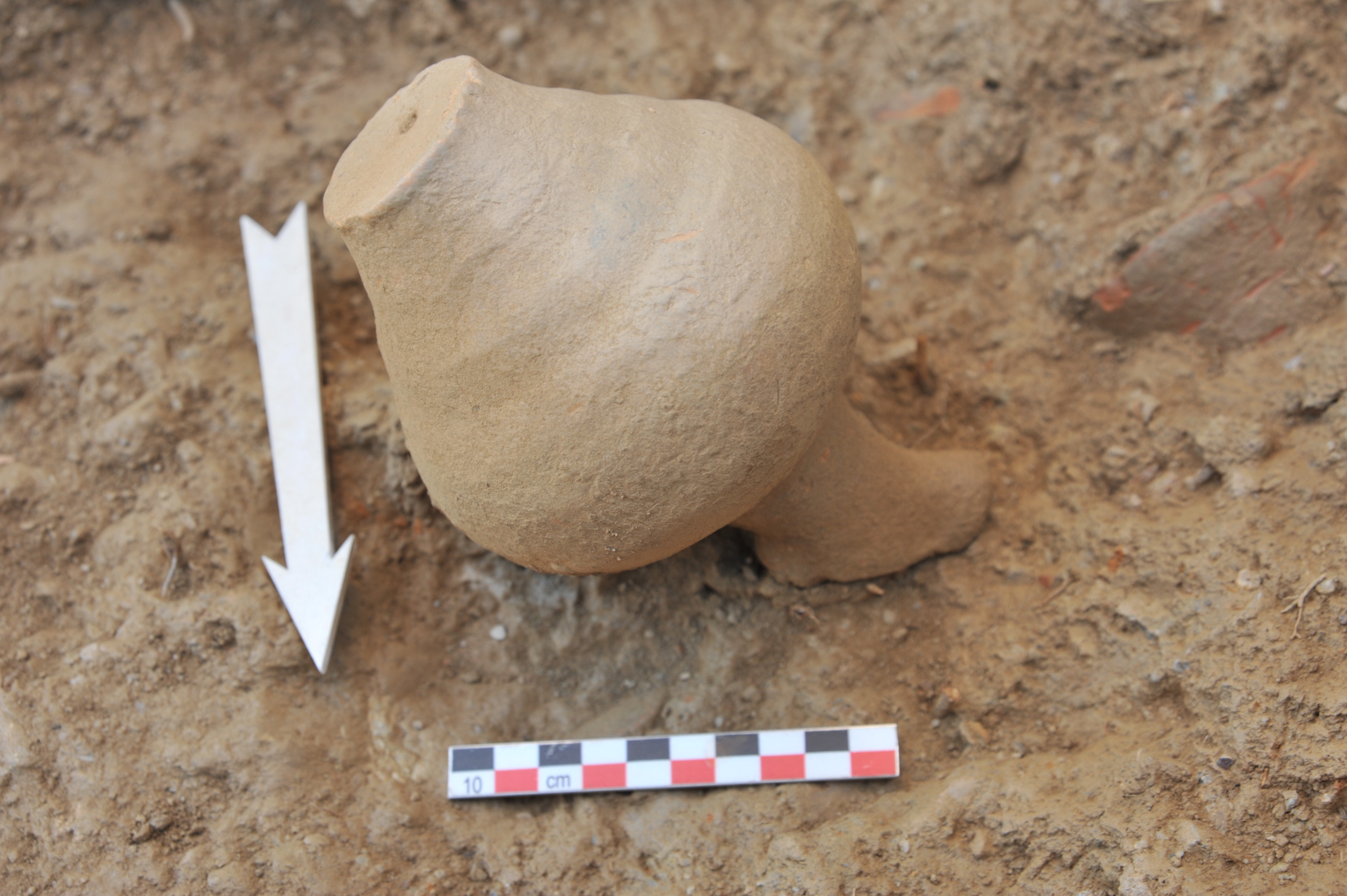 A dense layer of small unprocessed stones was cleared from the eastern part of Room 25 (fig.1). On the whole surface the discovery and removal of fragmented slabs of all sizes continued. At the central and eastern part of the Room, the large limestones of trapezoid shape, were removed. At the central and northern part of the Room, a new concentration of slabs horizontally placed in continuous rows was uncovered (fig.2), posibly originating from an upper storey.

Samples of coarse and fine pottery of minoan date but also of historical times were collected suggesting a disturbance at the area. The most interesting find is a bronze ring with spiral decoration (fig.3). An iron nail and an iron object of unknown use were also collected.

At the western part of Room 29/24 a quantity of slabs and unprocessed stones came to light, possibly fallen from the northern wall.

At Rooms 27 & 58 the excavation of layer 4 and of the biggest part of layer 5 (fig.1) was completed. Blocks and smaller stones come from the walls of the rooms. A few, mostly small in size, schist slabs have been found scattered throughout the excavated layers. They could have come from the floor of upper storey or from the ceiling.

During the excavation of layer 5 an increase in the number of finds was detected in the two Rooms mostly pottery sherds or complete vases. Among them, some conical cups, a juglet and also bigger vessels were discovered, like a small pithoid jar that has started to emerge in Room 58 (fig.2). Some miscellaneous objects were also collected, among which a whetstone from Room 27 and a bronze pin from Room 58 (fig.3). The mentioned finds could have originated from shelves on the walls of the Rooms or could have fallen from an upper floor.

At Corridor 34 the removal of layer 3 was completed and the excavation of layer 4 began (fig.1). Several blocks fallen from the walls and fewer shists were found. Some coarse and fine pottery was collected, a few bones, two conical cups and a fragment of a pot, probably from its neck.

During the third week of the research at Room 35a (fig.1) two more layers were removed from the central and the western part. They contained clay-earth, lepidha-earth and brownish soil. Most significant were some fragments of burnt wooden beams (fig.2) and some schist slabs from the floor of a higher level. The threshold of the entrance towards Corridor 36 was also clreared. In the eastern part of Room 35a schist slabs of paving of the ground floor were found. The full surface of the floor has not yet been revealed in this area.

At Room 35b (staircase) (fig.1) the work continued in the eastern part with the removal of two more layers of lepidha-earth and brownish soil. The paved floor (fig.3), the threshold of the stair, bearing a concavity for the wooden newel (fig.4) and a large fragment of plaster (fig.5) some of which bear traces of colors and striped decoration were revealed. Furthermore, the surface of the wall which divides the two rooms was completely cleaned.

Among the finds there are stone tools (whetstones) and several pots (conical cups, juglets etc.)(fig.6).

Two more layers were removed. A large number of medium- and big-size stones, fallen in various directions, covered the whole surface. Some stones blocked the northern opening of the Corridor and its entrance towards Room 35a (figs. 1, 2). Along the eastern opening, connecting Corridor 36 with Room 35a, part of a burnt wooden pillar was found (fig.3).

One layer was removed and a few small- and medium-size pottery sherds were found (fig.4).

In the northwestern corner of the Room a concentration of finds came to light. In total, 22 intact and fragmented pottery vessels were collected, among which an intact beaked jug (fig.5) and 3 stone objects, including a stone vessel (fig.6).

The excavation of the Room 43 was completed this week. A pavement made of huge stones was revealed. The architectural aspects of the Room are remarkable (fig.1,2,3). A low internal wall opposite the door creates a corridor. So, when entering the room from the north, one has to turn to the left and then again to the right, in order to reach the main (southern) part of the room. There, two narrow benches –having almost the same height with the internal wall. It seems that all the surfaces of the room were covered with plaster.

Fragments of plaster (fig.4), a grinding stone (fig.5), a piece of bronze (fig.6) and a global loomweight (fig.7) were found. The pottery includes fragments of a pithos and cooking pots, a conical cup and a shallow bowl.

At Room 57 the excavation continued with the removal of two more layers.

During the excavation of layer 5 (fig.1) a large amount of fallen stones and fragments of schists were removed, mainly from the corners of the room. The whole surface of slabs from the paved floor were uncovered and benches in the north and east side. Among the finds, a bead was found in the shape of a pressed sphere and a boar tusk close to it.

In the center of the nothern part of the Room, an open area was uncovered, probably a hearth (fig.2). Some traces of fire have been collected.

During the third week of the excavation, the investigation of the Pottery Kiln continued.

The research focused on the entrance at the northern part of the kiln. Six layers were removed (fig.1). From the area of the opening, a small number of fallen stones was cleared, as well as some schists. An amount of coarse and fine pottery was collected. Masses of solid clay-earth were found.

One more layer was removed from inside the kiln (fig.2). A few pottery sherds were collected and traces of fire were located on the floor, as well as masses of clay-earth.