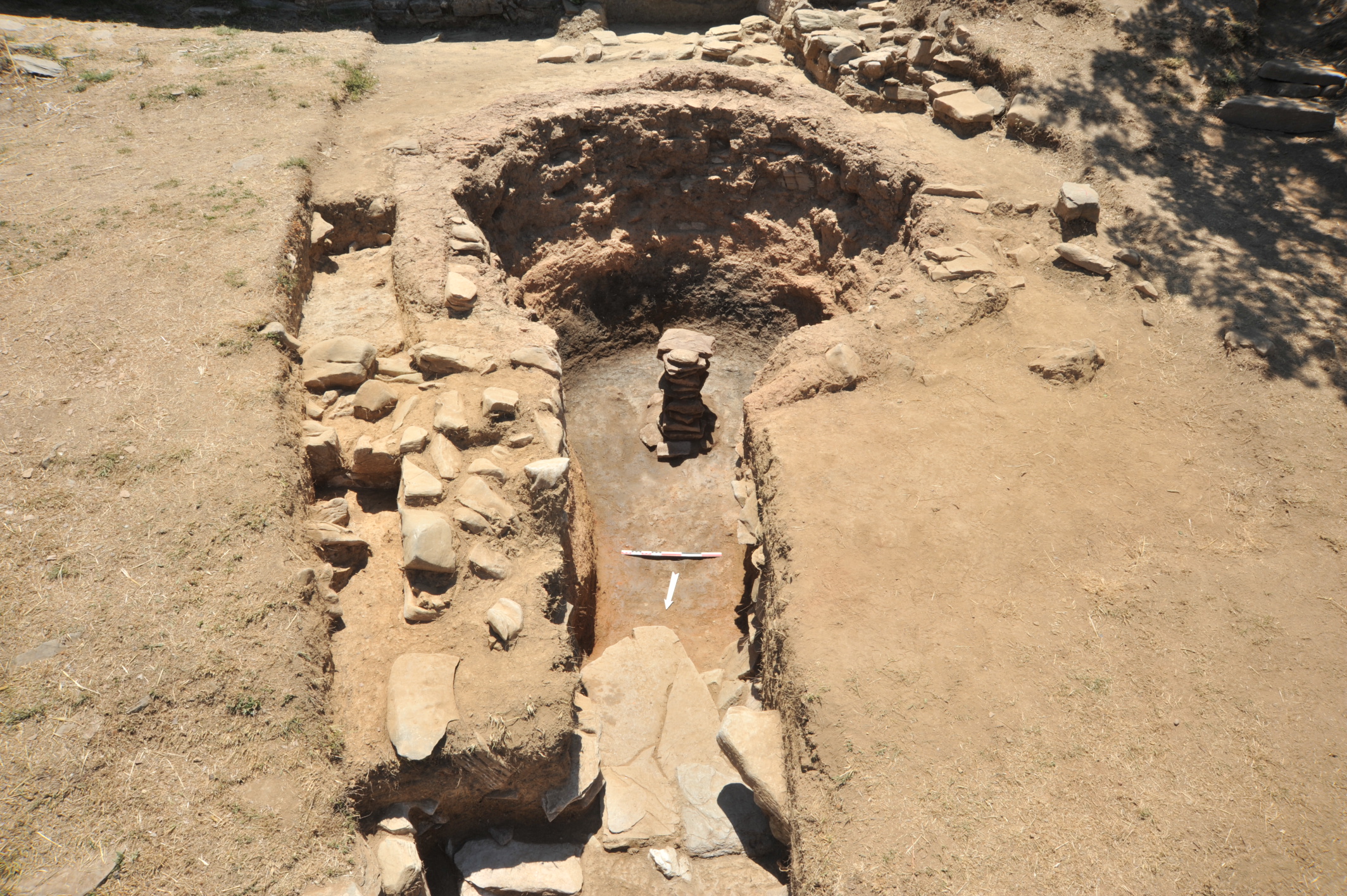 One more layer was removed from Room 25. The soil was burnt. Fragmented slabs continue to come to light, especially at the northern part of the Room. (fig.1).

Coarse and fine ware pottery sherds of small and medium size, a small fragment of rock crystal and a few pieces of carbon were collected. The most interesting find is an iron arrowhead.

Two new walls were located, Walls II and III, of N-S orientation, vertical to the northern and southern wall of the Room and situated to the east of Wall I that divides Room 29 from Room 25 (fig.2). The investigation of Wall I took place earlier this season, during the excavation of Room 25.

Pottery sherds, mainly coarse but also some fine ware, and animal bones were found. The most interesting find was a bronze double axe (fig.3). A conical cup and three fruit-stands also came to light. Furthermore, a pile of burnt soil was investigated, from where a quantity of carbonized wood and pieces of carbon were collected.

At Room 24, two more layers were removed. No new architectural elements came to light. Mainly coarse but also fine pottery sherds were found, as well as animal bones and a small pebble.

At Room 27 (fig.1), the quantity of the finds continued to increase in both layers, which probably indicates that the excavation is reaching the floor of the Room. They included some conical cups and two whetstones. Most of the finds were located along the western wall (fig.2) and could have originated from a shelve.

At Room 58 (fig.1), fragments of the small pithoid jar, that had started to emerge in the central part of the room, keep coming to light together with fragments from one more pithoid and from an oval-mouth amphora (fig.3). A large limestone slab that was found in horizontal position at the northwestern part of the Room also raises interest. Its use will be examined in the following week of the season (fig.3).

At Corridor 34, layers 4 and 5 have been removed and the excavation of layer 6 started (fig.1). Several fallen stones were cleared, some schists among them. An amount of pottery was collected, some small animal bones, two conical cups, a sea shell (limpet) and a small fragment of plaster bearing red-colored decoration on a white band.

During the fourth week of research at Room 35a (fig.1) three more layers were removed from the central and western part. They consisted of clay-earth, lepidha-earth, brown soil and several fragments of burnt beams. An impressive threshold of the opening to Corridor 36 was uncovered. On it, the hole for the fitting of the wooden door (fig.2) is still visible, though submerged. An indentation on the western door-frame and a slab of the paved floor were also found. Furthermore, exactly to the south of the wall dividing the Rooms 35a and 35b a large compact surface of plaster (fig.3) was located and the conservators started the procedure for its removal (fig.4). Many small fragments of plaster with traces of black, blue, red and white colored decoration of bands and other motifs were collected from the inside, among pieces of carbon, shattered pottery sherds, schist slides and small stones.

At Room 35b (staircase)(fig.1) the work continued at the western opening between Rooms 35a and 35b. There, after the removal of the same filling as at Room 35a, containing many animal bones and some pottery, the threshold came to light (fig.5). The excavation of this part will continue the following days. Lastly, conservation works took place at the eastern part of the staircase (fig.6).

The finds included an intact lamp (fig.7), some conical cups, a juglet, whetstones and a sealstone bearing a hole and incisions (fig.8).

Three layers were removed at Corridor 36. Pottery sherds were collected. Many middle- and large-size stones were cleared. The stones were found fallen in random positions and different directions blocking the northern entrance of the Corridor and the opening towards Room 35a (fig.1, 2). Along the eastern opening towards Corridor 36, pieces of a carbonized wooden beam were located, probably from the casing of the door (fig.3).

One layer was removed at Room 37 and pottery sherds of small and medium size were found (fig.4).

Various parts of Room 43 (fig.1) were excavated and conservation works took place. Several pottery sherds were collected, also a few small animal bones and some small pieces of carbon. The borders of the eastern and southern walls, that where destroyed by looters during the 1960s, were cleared and the fallen building blocks were restored to their original position (fig.2).

At Room 57 the work of excavation was finished. Both the floor and the walls of the southern part of the Room were cleaned. New stone slabs and an oblique wall were located under the ground level, belonging to an older architectural phase of the Building (fig.1). Small- and medium-size pottery was collected, including the part of jug, the rim of a pithoid vessel and lots of handles and bases. A small amount of animal bones was also found. In the northern part of the Room, an investigation took place of the separate space, defined by the stone slabs of the floor, Some coarse and fine pottery was collected. The traces of fire that were discovered in this area support the suggestion that this rectangular space, with dimensions 0.95×0.60 m, was the hearth of Room 57 (fig.2).

Finally, we continued the last year’s excavation of Room 57a (fig.3). The work was mainly concentrated in the northwestern corner of the Room, where a trench was opened aiming to the uncovering of the wall’s foundation. This wall is the extension to the west of the northern wall of Room 13.

At the area of the Pottery Kiln, the lower layer was removed from its interior. During the excavation, schists were cleared, a small amount of pottery was collected and a big quantity of solid clay-earth pieces was also found. Conservation works took place inside the kiln and the restoration of the stone pillar was achieved (fig.1).

Two slabs in the entrance were located, one of which may have served as a threshold.