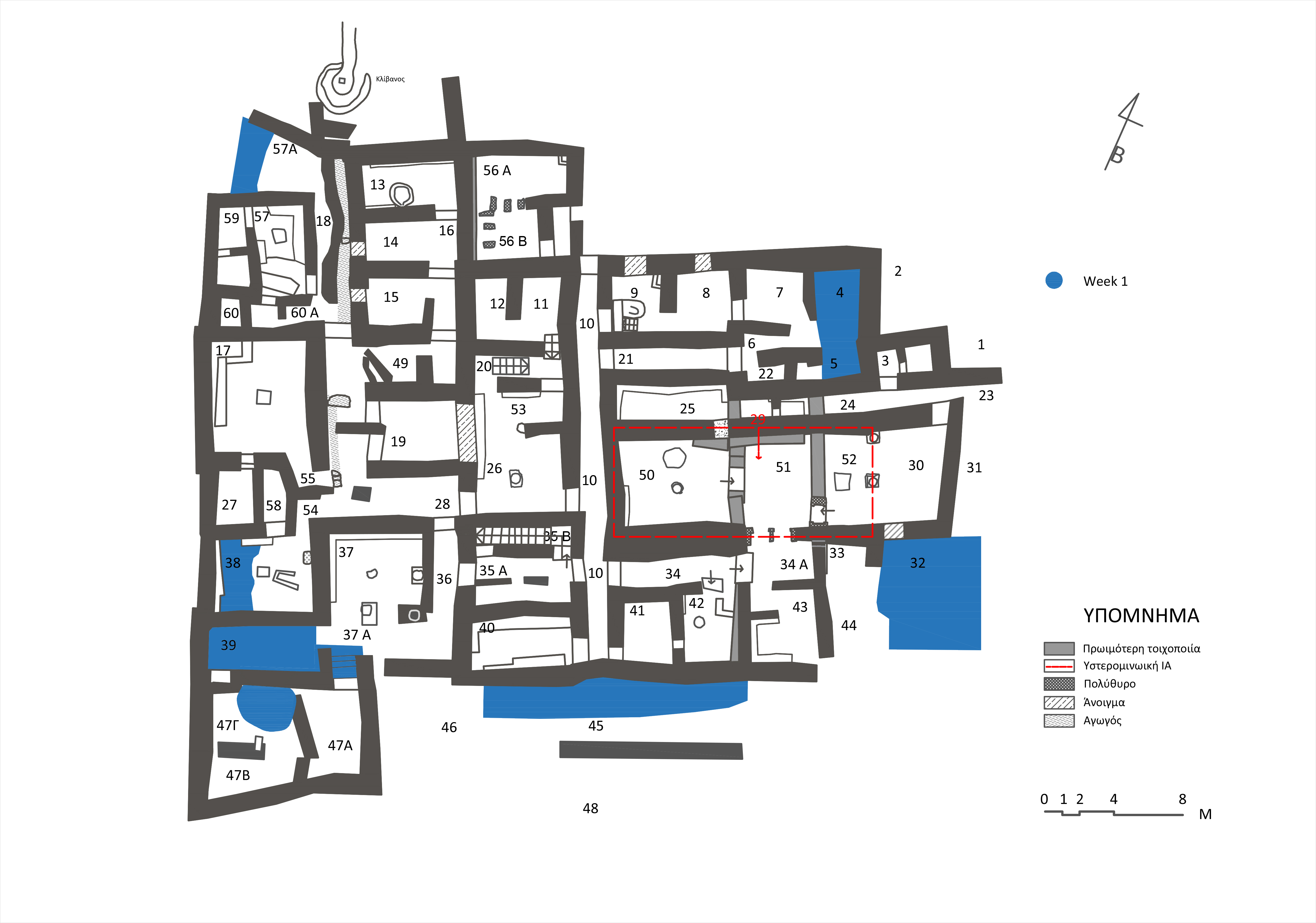 ROOMS 4-5
The Rooms 4 and 5 are located in the northeast corner of the archaeological area east from Rooms 6, 7 and 22 and north from Room 24. During the first week the finds were just a few pottery sherds, small pieces of bones and a small piece of charcoal. Also a lot of fragments of plaster have been found on the northwest, southwest and northeast sector. During the removal of the soil a lot of limestones and some schist stones were noticed. The soil was soft, loose in open brown shade (Fig.1).

ROOM 32
Room 32 (Fig.1-2) is located at the south eastern side of Zominthos main building. It is a small room with no walls found so far at the east side. Its south and west side is highly disturbed. The big stone plates with small stones under them at the west side of the room indicate a staircase but it is too early to tell. At the southern side of the room 32 (east side of room 44), two big schist stones were discovered at the deepest layer.
The excavation yielded a small amount of pottery sherds and an even less amount of animal bone fragments. The most interesting finding is a bronze coin of the roman emperor Marcus Aurelius (Fig.3-4). A part of rock crystal stone was found close to the above mentioned coin.

ACCESS FROM THE ROOM 37A TO 47A
During the first week of the 2017 period we continued the excavation of the access from Room 37A to 47A, which is located at the SW part of the Central Building. After the removal of three layers with lepidha-earth and fallen stones, were revealed two stairs of a staircase which leads from the Room 37A to the threshold of the Room 47A (Fig.1). A bronze object of unknown use, a horn of a small animal and many conical cups were collected (Fig.2).

ROOM 38
Room 38, a great room with a central pillar in the SW part of the building (Fig. 1), was excavated during last year’s excavation season. However, a small part of the floor layer of the final destruction of the building remained unexcavated in the western part of the room, in the area where a great storage jar (pithos) was unearthed last year. During the first week of this excavation’s season this layer was removed and a burnt layer with clayish earth appeared underneath, almost the same kind of burnt layer that has already been revealed in the eastern half of the room (Fig.1-2). To the west of a bench unearthed along the eastern part of the north wall during last year’s season, two simple rectangular stone constructions came to light, each made of four slabs placed in a vertical position (Fig.2-3). Among the finds of the layer were a number of small pottery vases, mainly conical cups (Fig.3), a sherd possibly belonging to a ceremonial libation vessel (rhyton) decorated with painted running spirals (Fig.4), two small pieces of rock crystal, an obsidian blade and several carbonized seeds. A small trial trench that was excavated just to the north of the central pillar of the room showed that under this level exists a basement of the Late Minoan IA period or a room dating to an earlier phase. 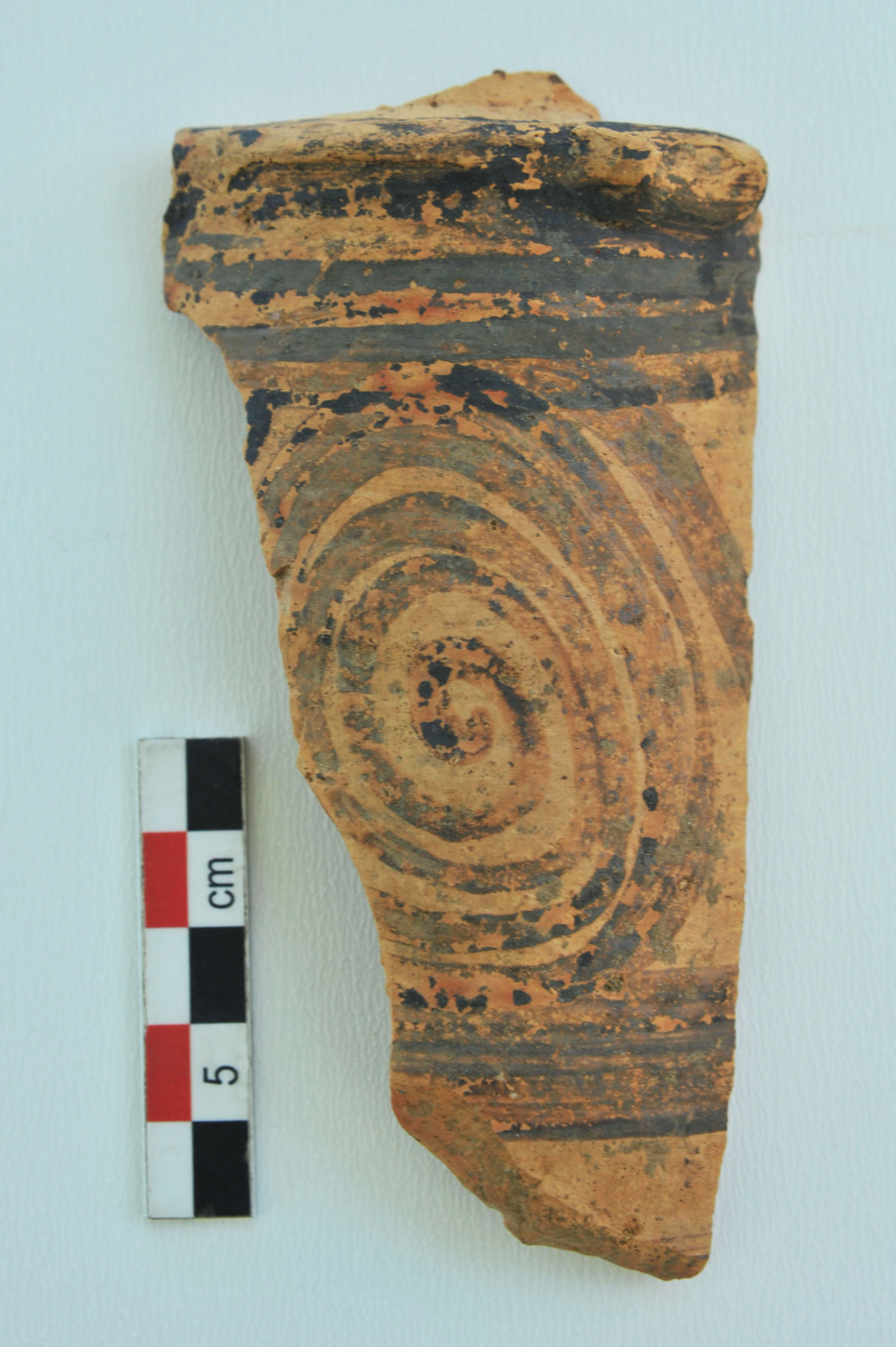 ROOM 39
Room 39 is located at the SW part of the Central Building. Its excavation started this year (Fig. 1). After the removal of the surface layer and a layer with lephida-earth, a large number of various-sized fallen limestones and schists were found especially at the east part of the room, next to the entrance between the Room 39 and the Room 37A. During the excavation, the west part of the South Wall which was covered by a modern circular construction, was revealed. Among the fallen stones, only pottery sherds and animal bone fragments have been found.

ROOM 45
Room 45 is located on the southern part of the central building of Zominthos and borders with Room 41 and 42 on the north. Research focused in the first week at the northern part of the area in which the southern wall of Rooms 41 and 42 were investigated more and soil from that area contained small quantity of shreds and some animal bones (Fig.1).
New lower stones of the north wall came to light and the stone pile that located south of the same wall was investigated further giving a more clear picture of the destruction of the wall due to illicit excavations (Fig.2).
The investigation of that specific room is in progress as limits of the room are still to be found at the east and west borders of that area. Investigation of a wall on the southern part of area is going to be done next week. 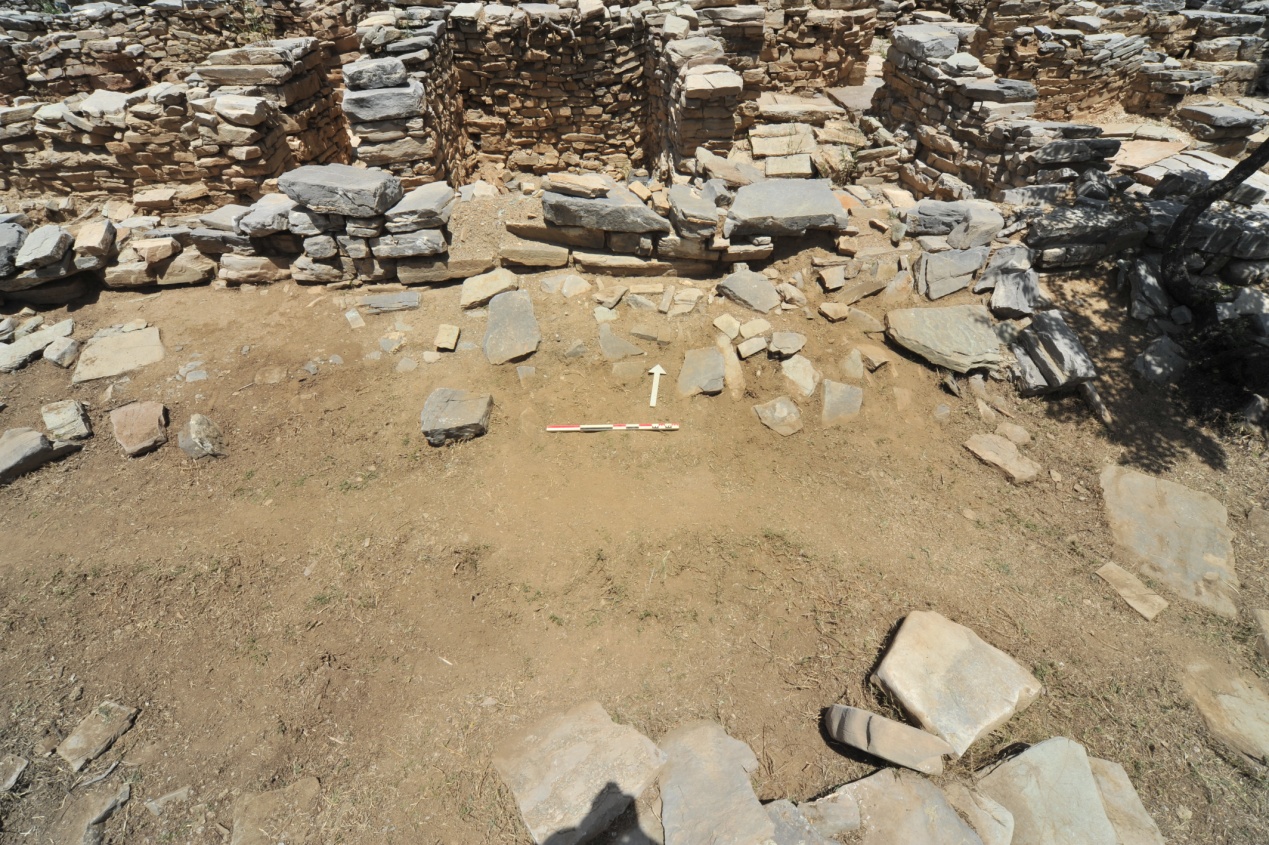 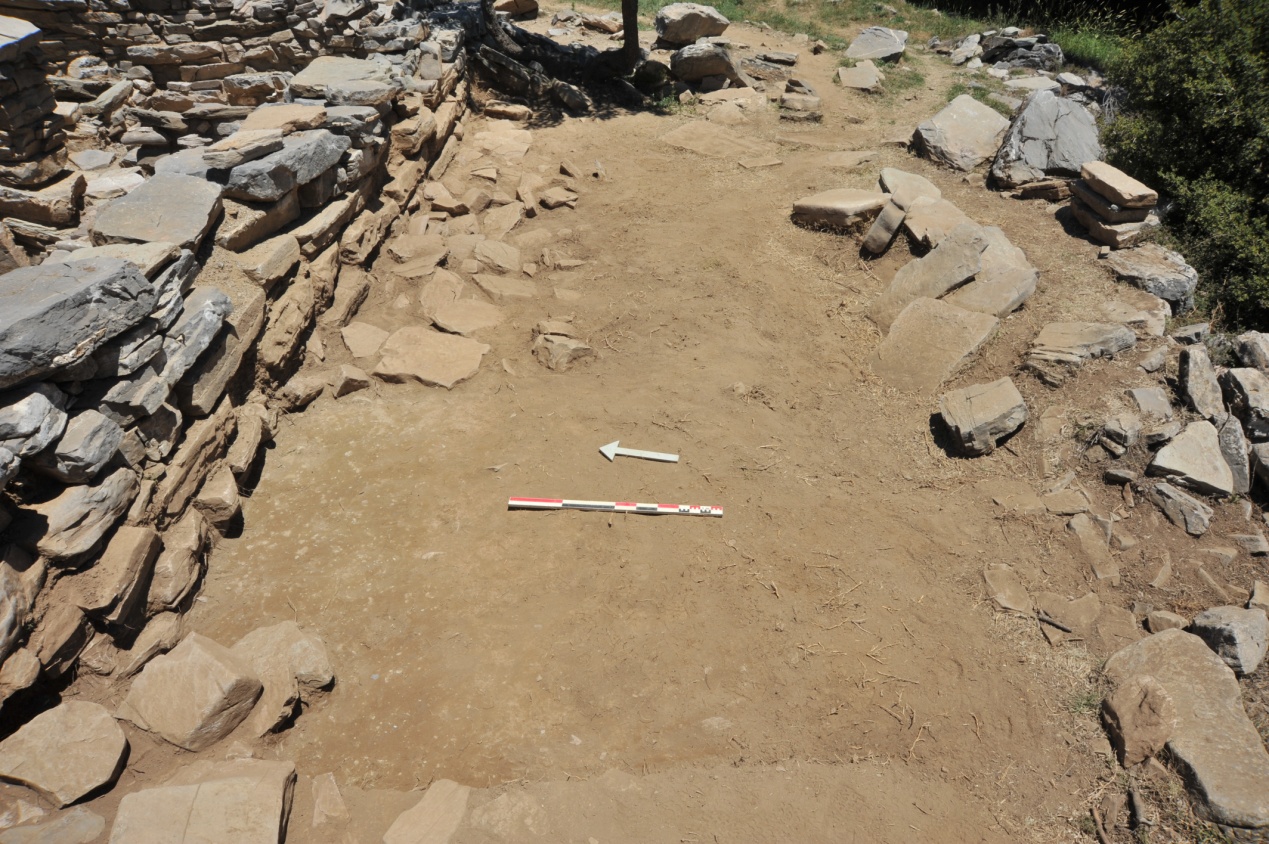 ROOM 46
Room 46 is located on the south side of Room 40 of the main building of Zominthos and the limits of the area that is going to be excavated are not so clearly visible but the most clear limit is the north wall of the Room 46 (the south wall of Room 40).
The excavation started at this room in order to investigate the limits of the room based on stones that indicate architectural remains and on the first week digging focused south of the northern wall of Room 46 in order to reveal more of the lower stones of the wall. From the removal of the first layer of soil, lower stones of the wall came to light along with small quantity of shreds and some animal bones (Fig.1). In that room illicit excavations took place causing serious damage to the building. 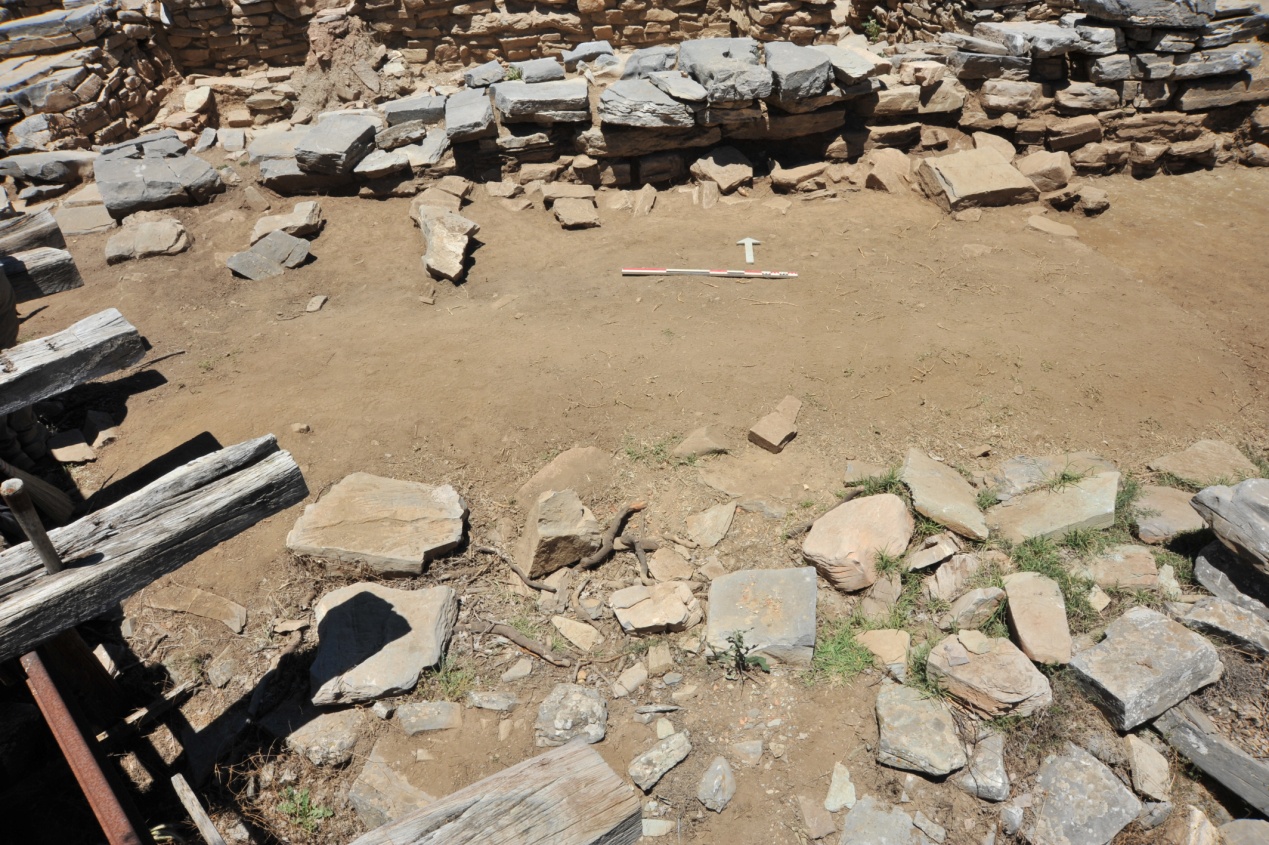 ROOM 47
Room 47 is a big room located in the south side of the main building of Zominthos. Its excavation started last year. It consists of three independent rooms separated by two smaller walls.
The first week focused in the central and west wing of room 47 where there was a stone farming construction of recent years which has been destroyed in the winter time by the snow.
A special type of amphora, a vessel in shape of a basket and a large jar were collected (Fig.1-3). It is important that in Room 47 is saved a part of the upper floor with elements like threshold, paved floor and the walls in the north and central part of Room 47 (Fig.4-5).

AREA 57A
The area 57A is located north of the rooms 59 and 57 and southwest of the kiln, which its excavation started last year. This year we continue the excavation on the west part (Fig.1-2).The shape of 57A is trapezoid. The whole area was plenty of ceramic parts from different vessels in shape like kalathos and small conical cups and roof tiles. Stone grinders and a small accumulation of pebbles, carbons and bones were also collected.