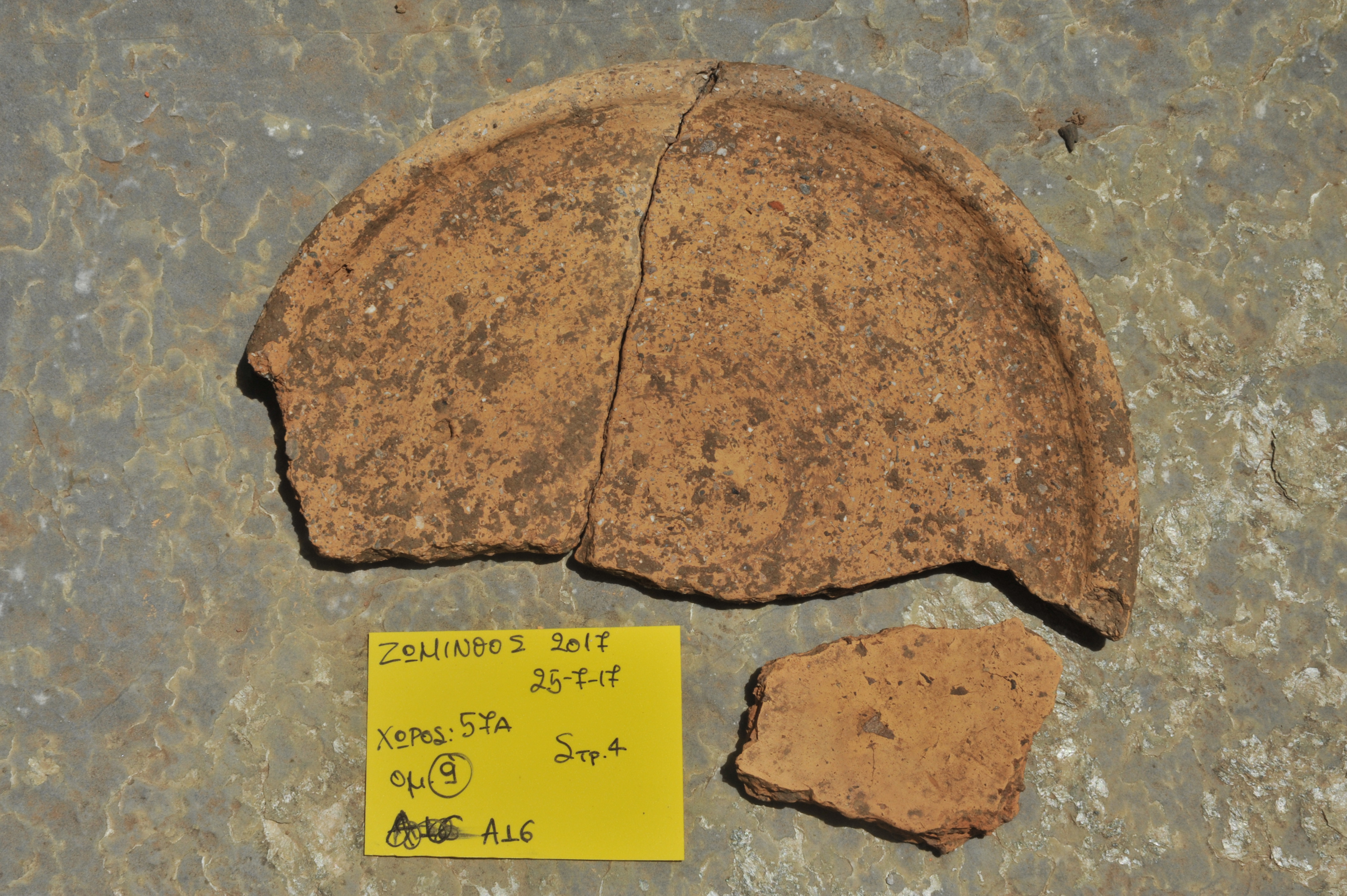 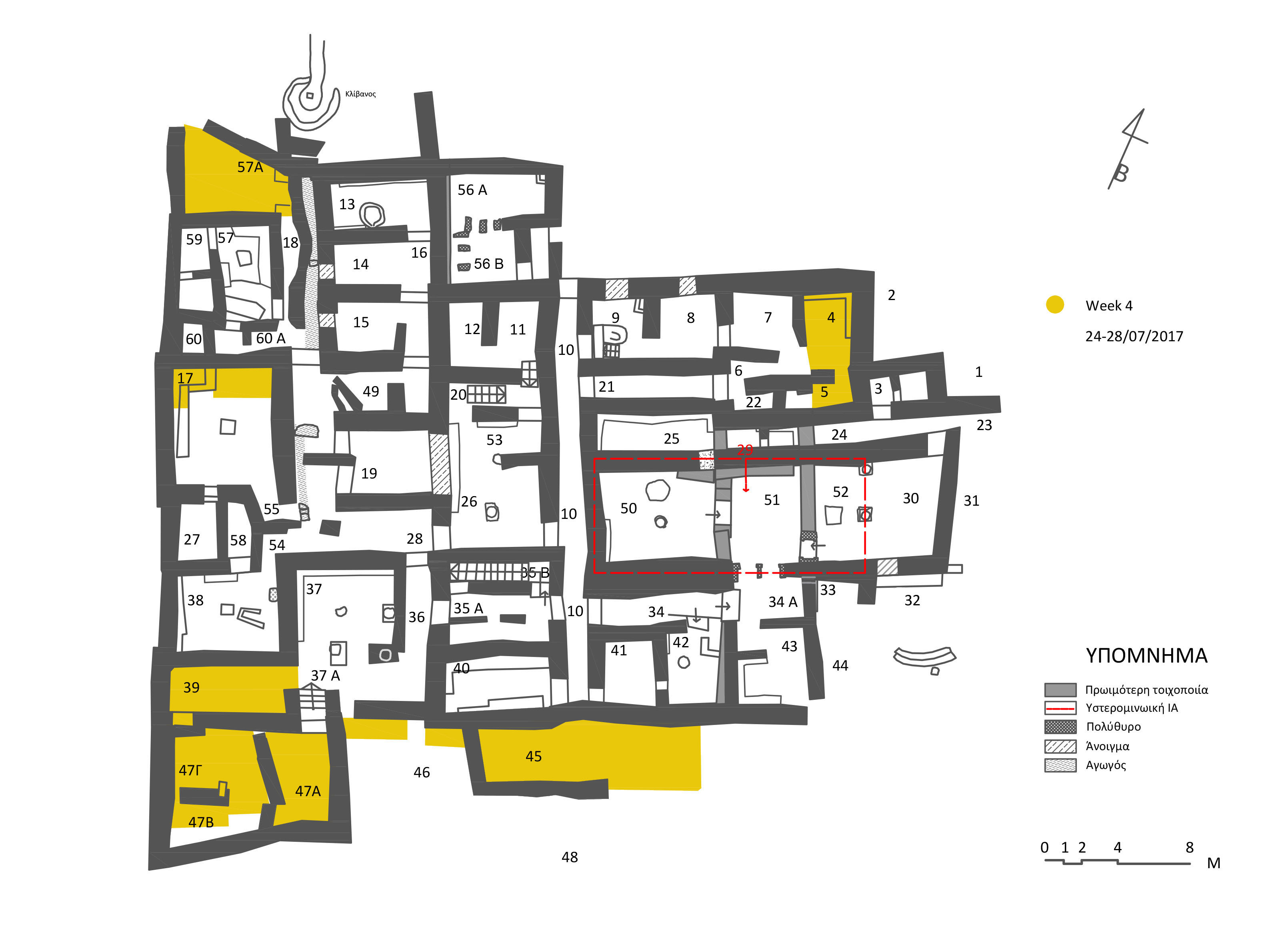 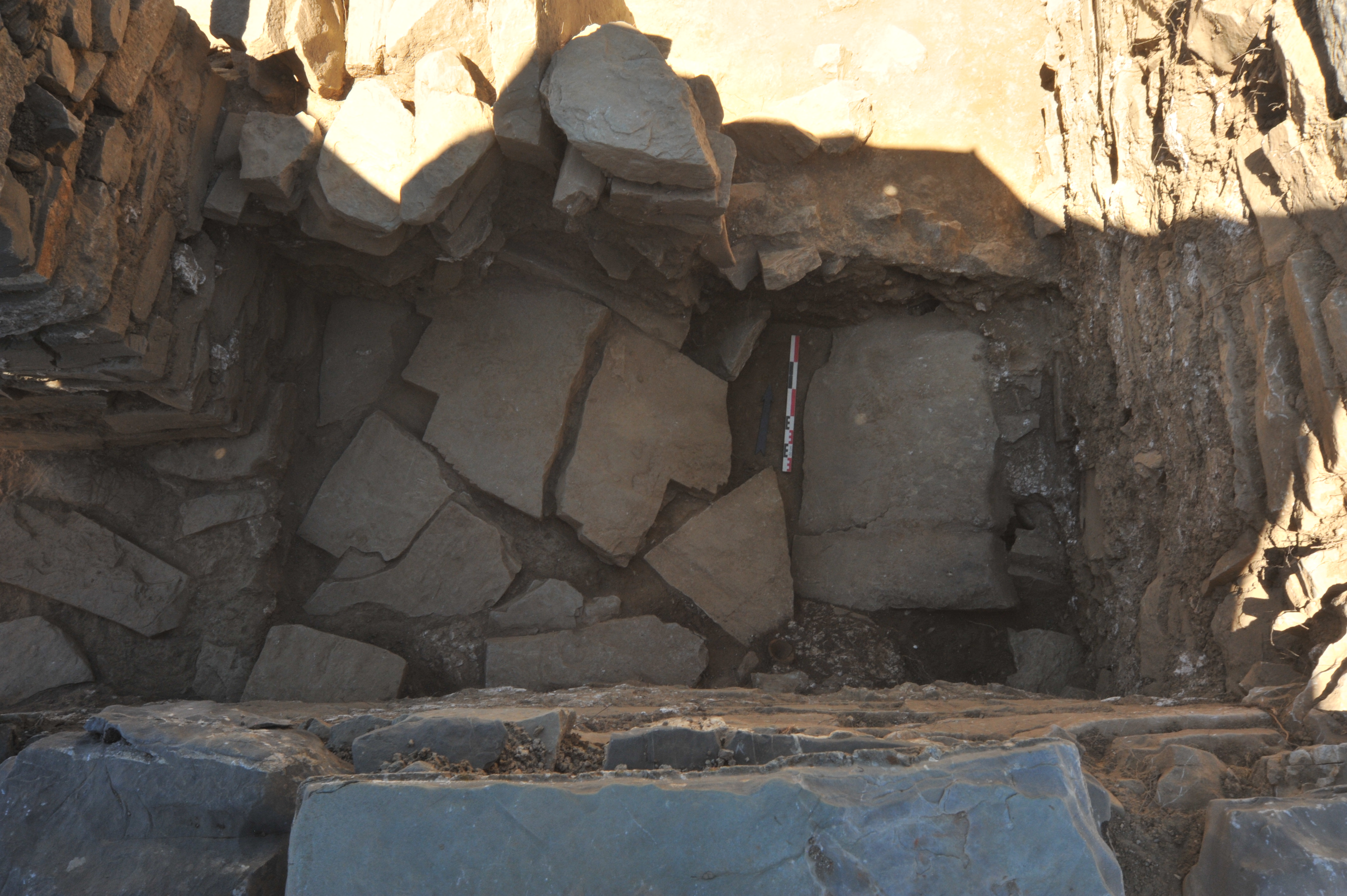 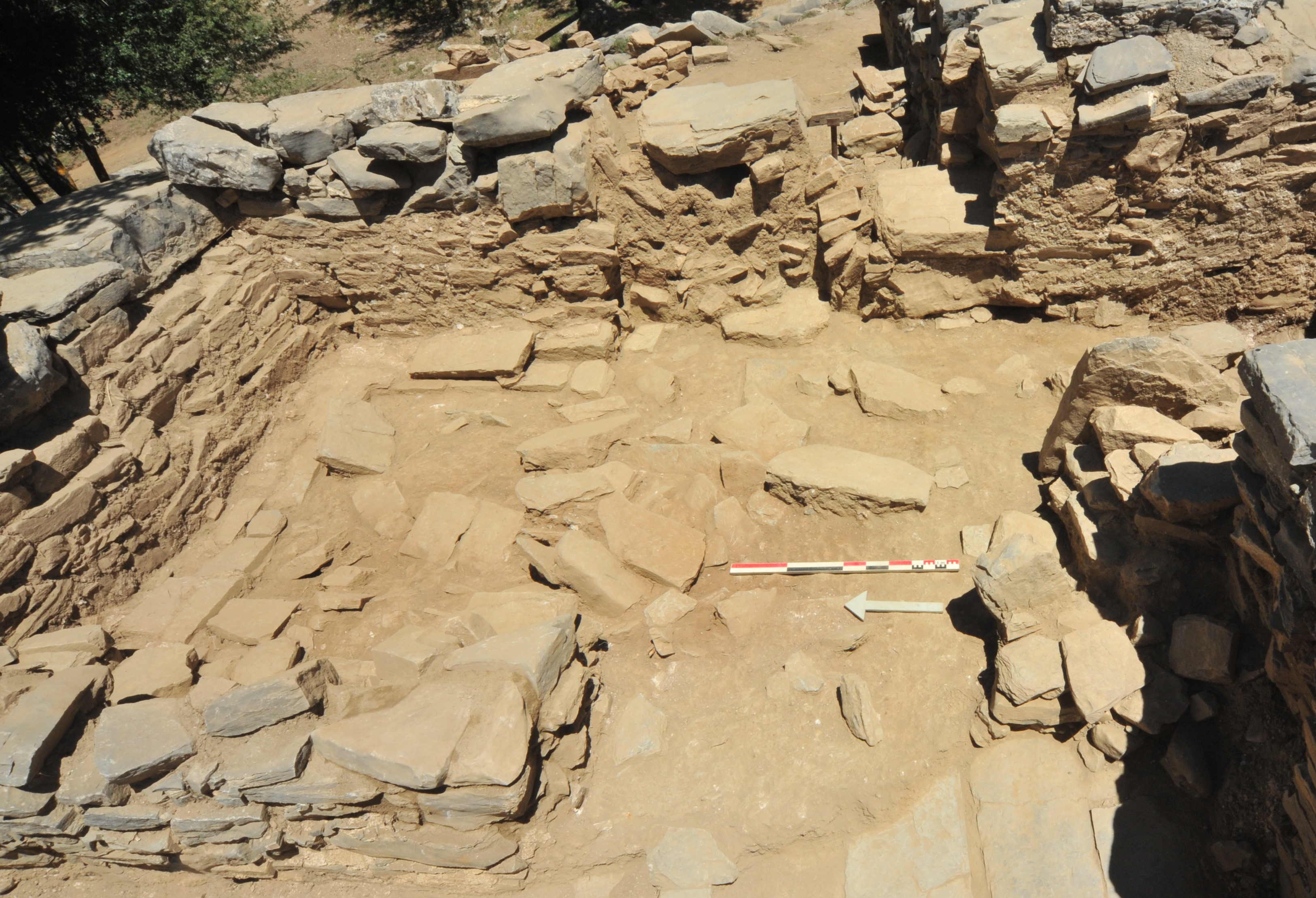 ROOMS 17 & 55
This season’s work in Room 17 came to an end with the completion of the excavation of the burnt floor layer during the last week (Fig. 1-2). A number of architectural features of particular interest came to light, such as a huge, burnt limestone slab serving as the base of the central pillar of the room, as well as another simple stone construction just to the northeast of the pillar (Fig. 1-2). Among the few finds of the last part of the floor layer that was removed in the central and northern part of the room, worth mentioning are a miniature conical cup (Fig. 3), the clay lid of a medium sized vessel (Fig. 3), a pottery sherd bearing the applied relief depiction of a lying animal and a boar’s tusk. 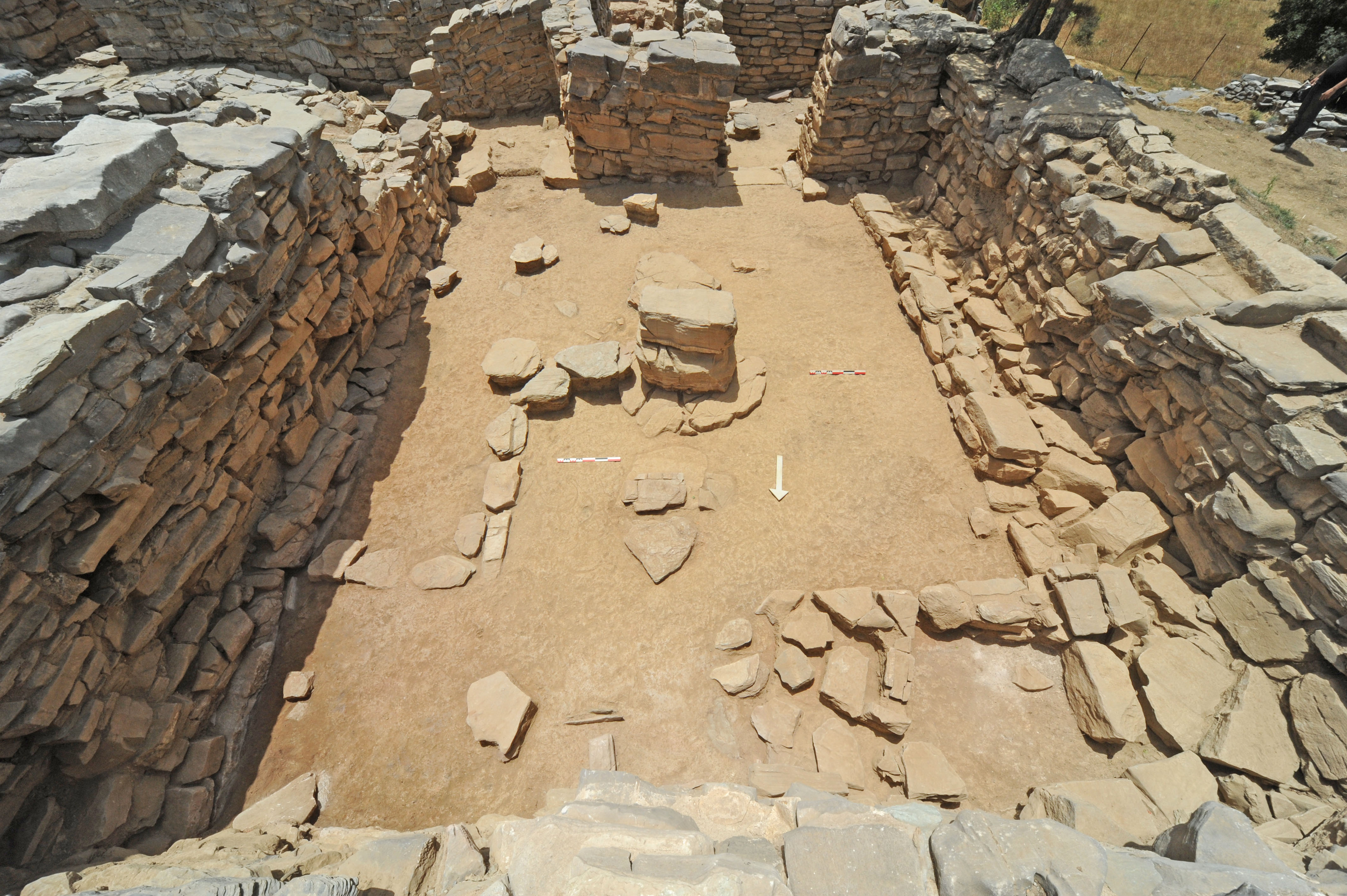 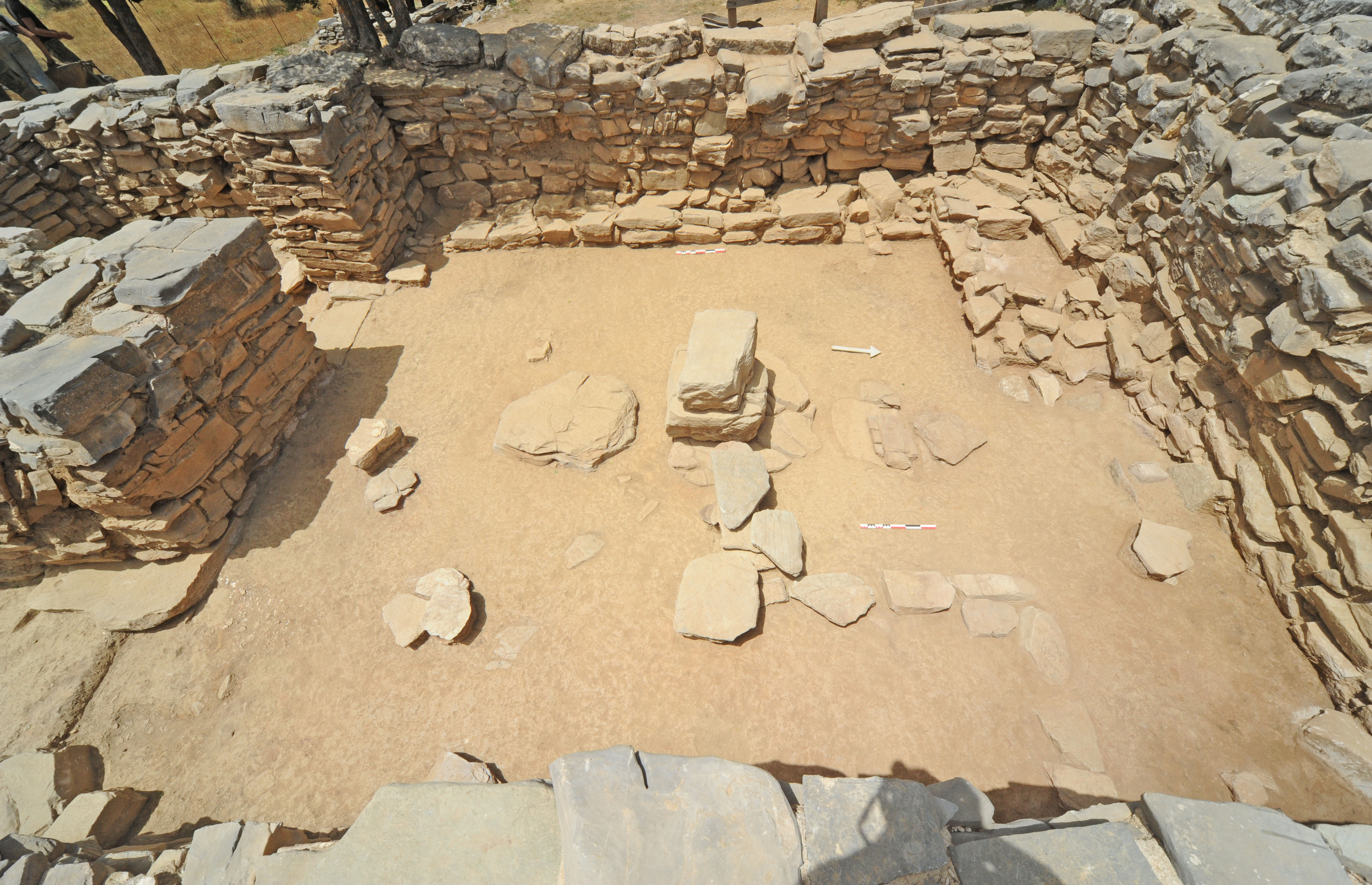 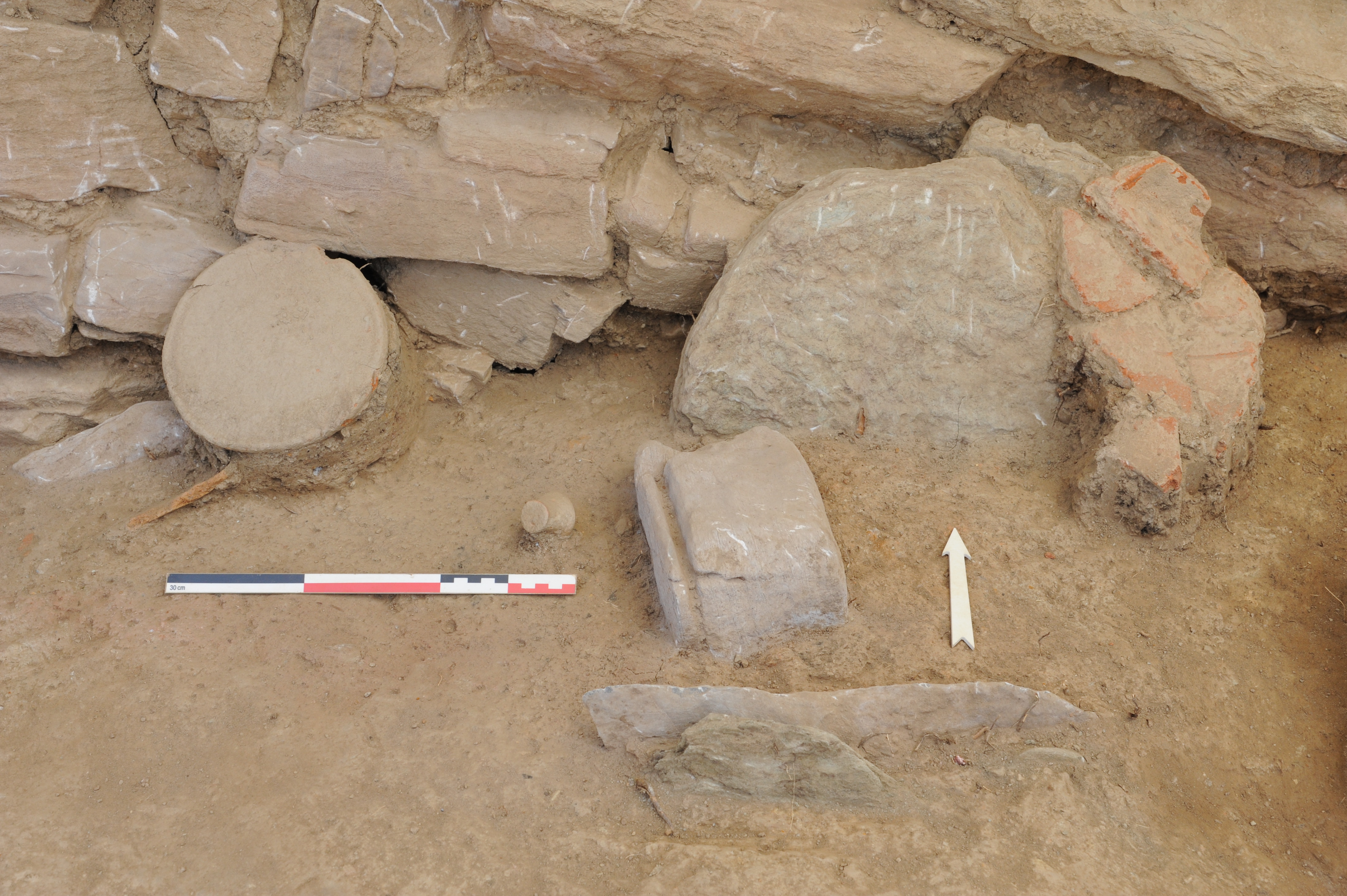 ROOM 39
During the fourth week, after the removal of a burnt lephida-earth layer with several fallen limestones and schists slabs from the floor of the upper storey the paved floor on the ground level at the east entrance of the room was revealed (Fig.1). Many conical cups (mostly from the NW part of the room), parts of a pithos with corded plastic decoration (Fig.2), a copper bead (Fig.3), several small raw parts of rock crystal, little fallen small parts of red and dark plaster, animal bone fragments and several pieces of burnt woods were collected. 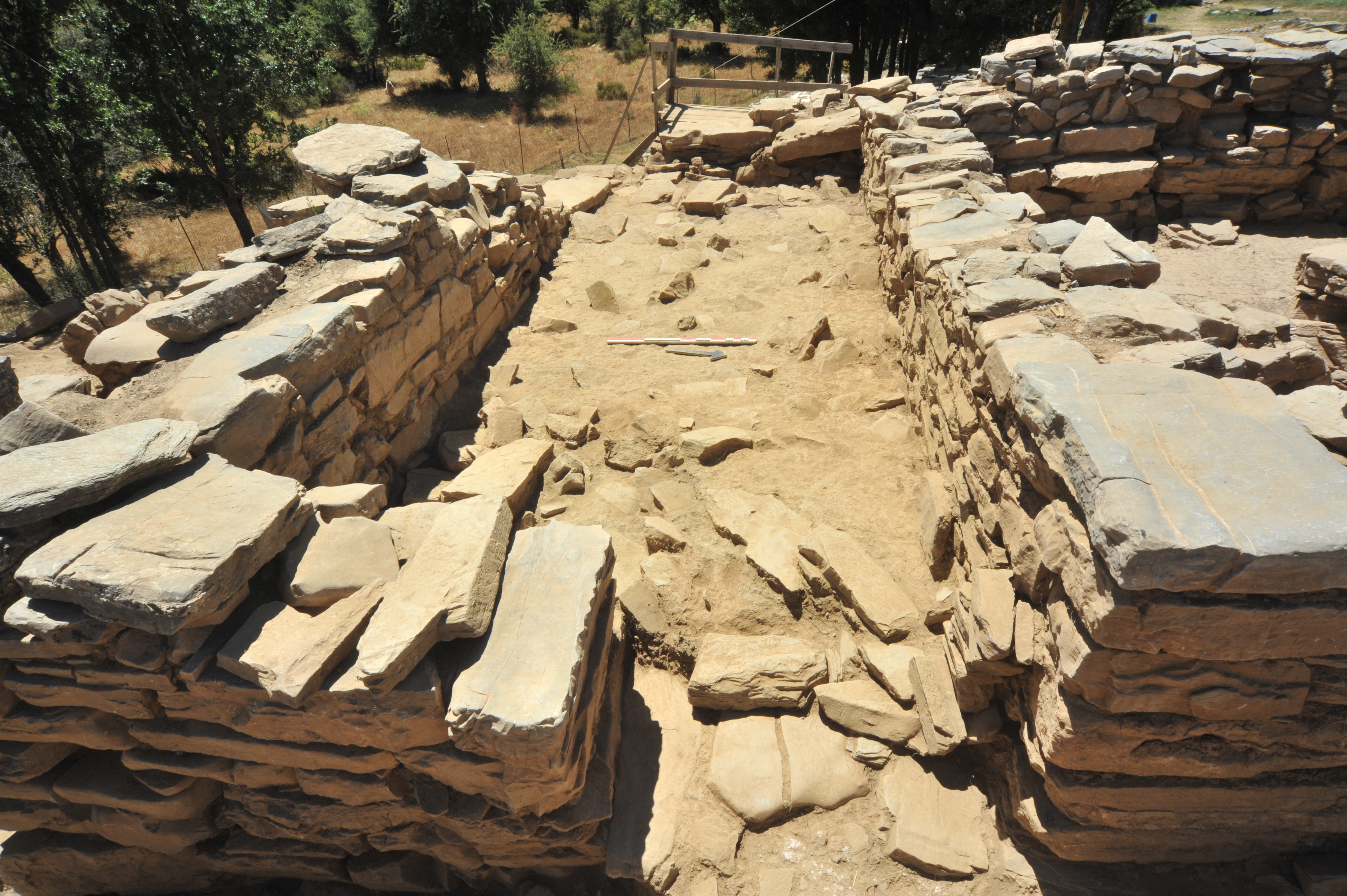 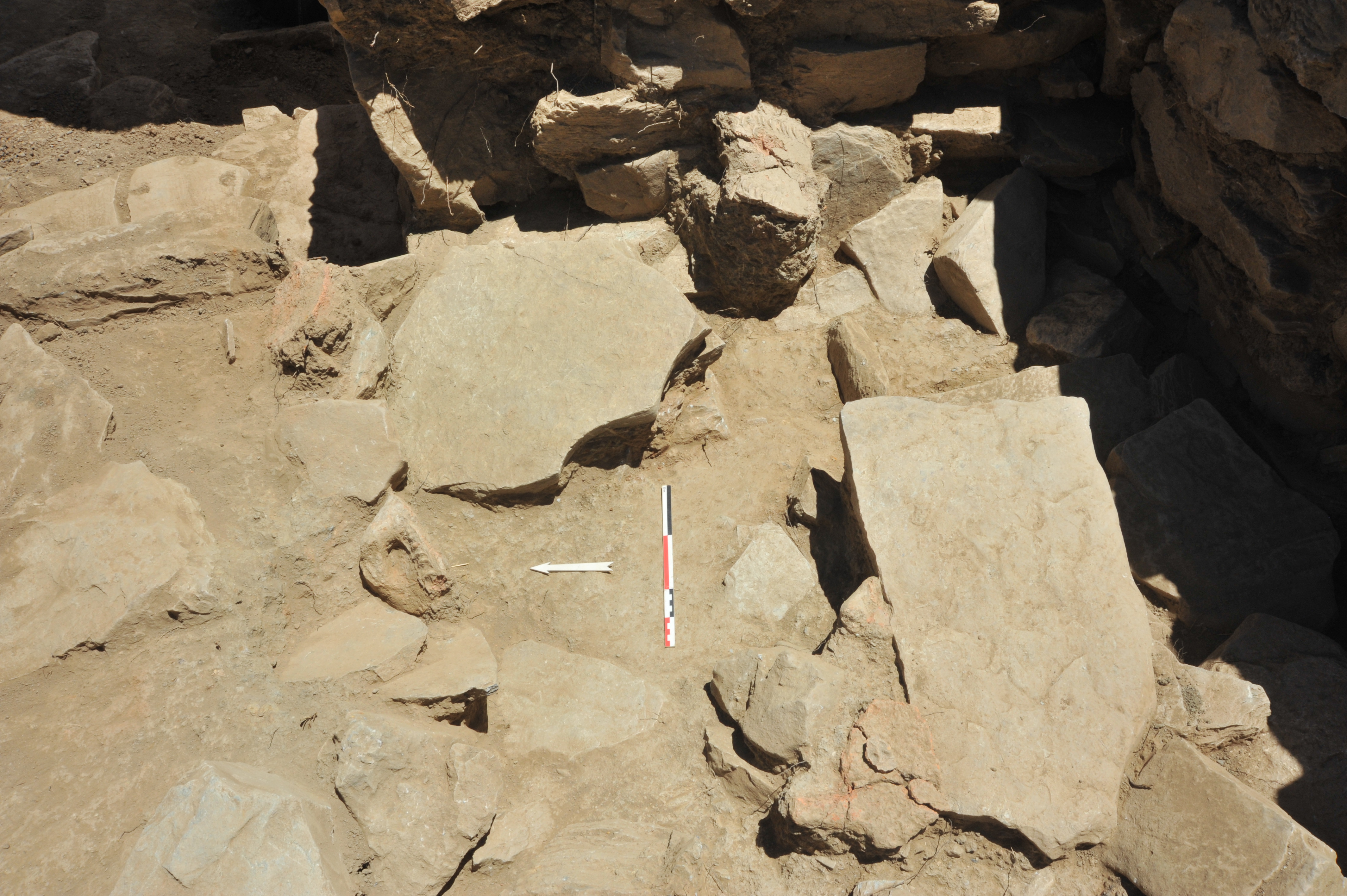 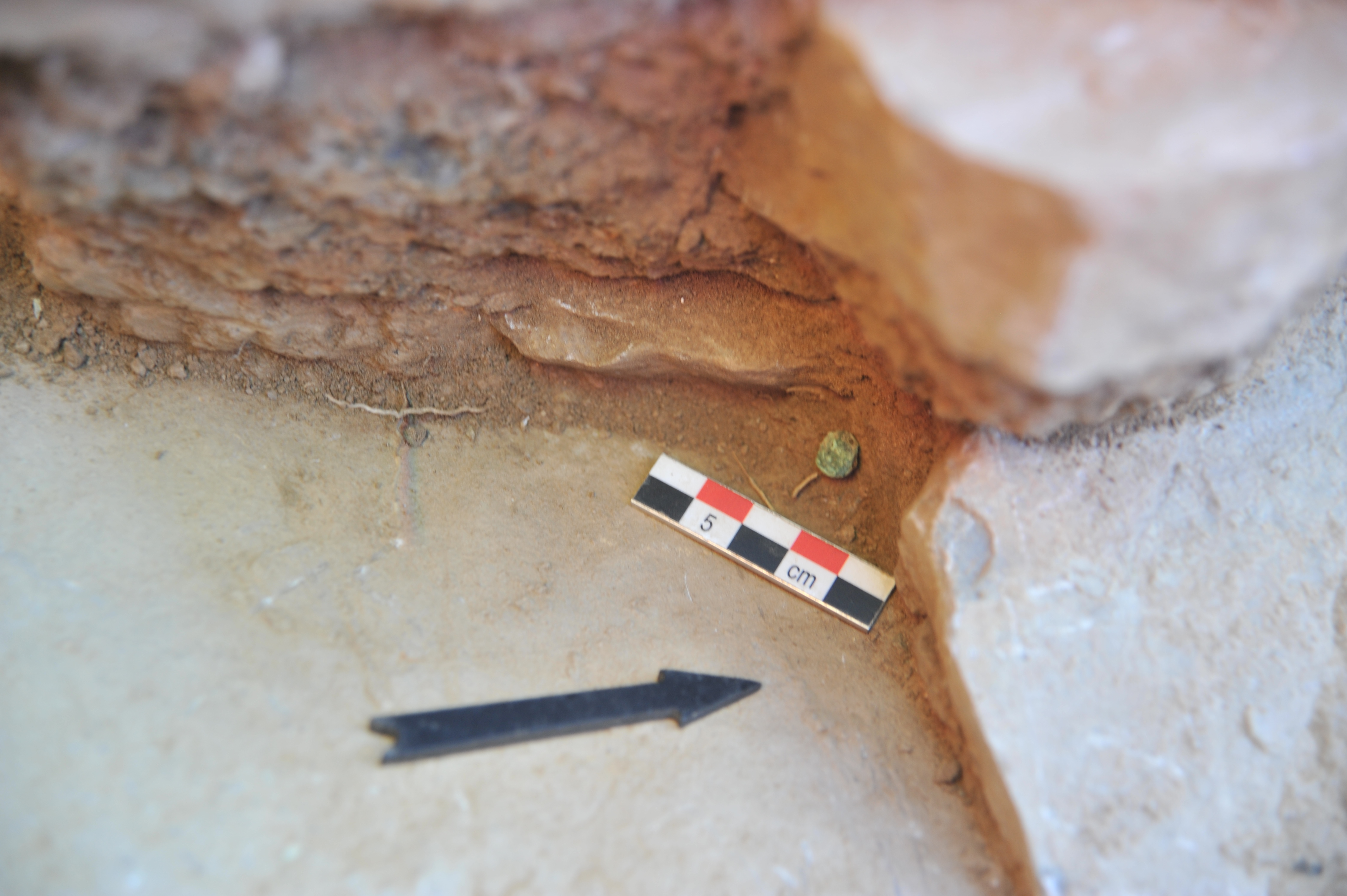 ROOM 45
During the fourth week of the excavation the Room 45 has been excavated in two parts, one in the west and one in the east. The soil on the east part of the room is disturbed probably from illicit excavations. On the west side of the Room 45 a part of a paved floor with big flat stones has been revealed (Fig.1). Throughout the area the finds are some pottery sherds, a few bones and small pieces of charcoal. 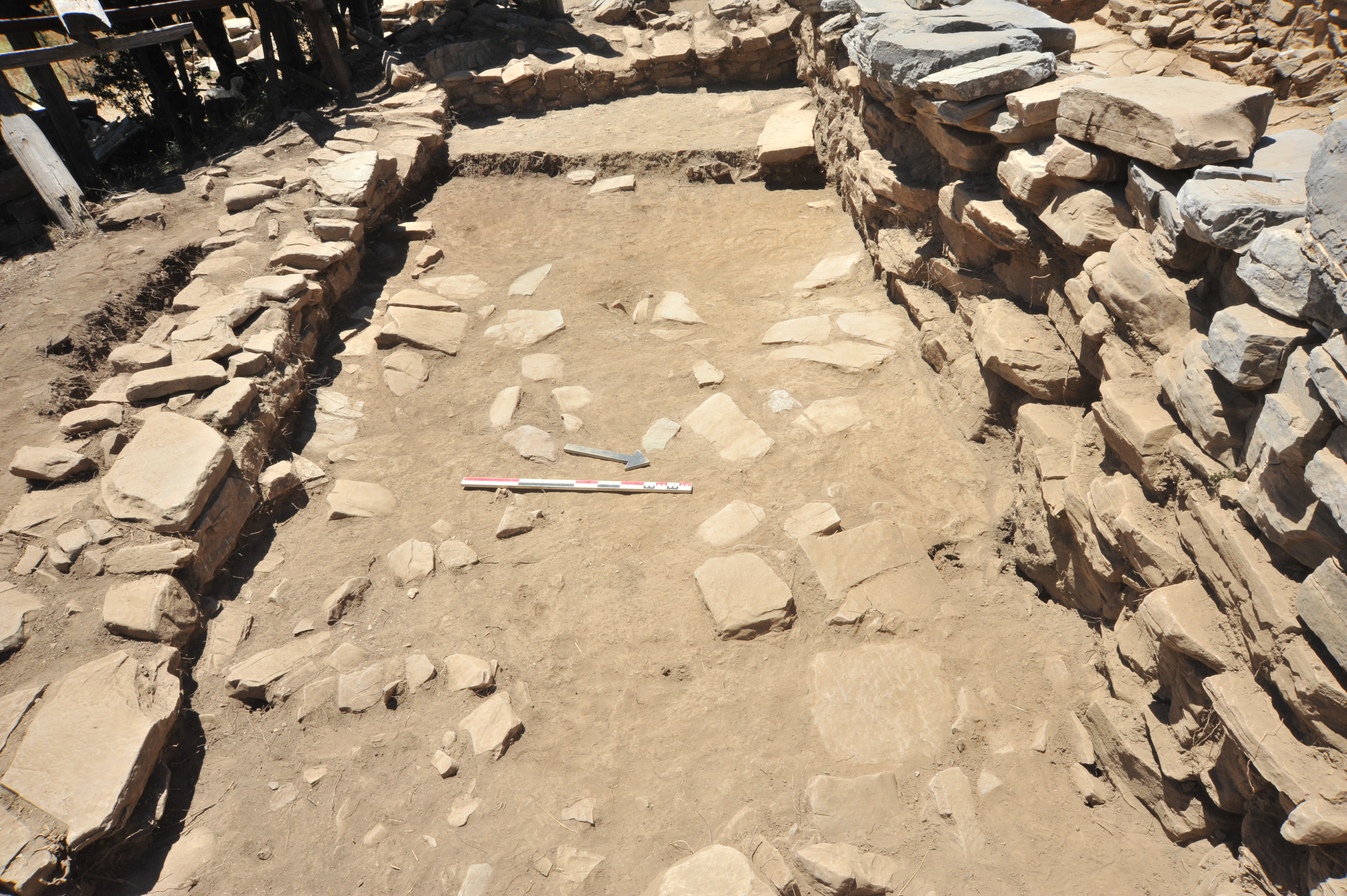 ROOM 46
During the last two days of the last week a new excavation sector was opened in the southernmost part of the building, namely in Room 46. This room has never been investigated before, and thus its precise dimensions and plan remain quite unclear. Its eastern wall has just been revealed during this year’s excavation in the adjacent Room 45. One of the main goals of this season’s work in Room 46 will be the investigation of its northern limit, more precisely of a possible wall separating it from Room 37A (Fig.1). So far, only the excavation of a surface layer in the northern part of the room has been completed. 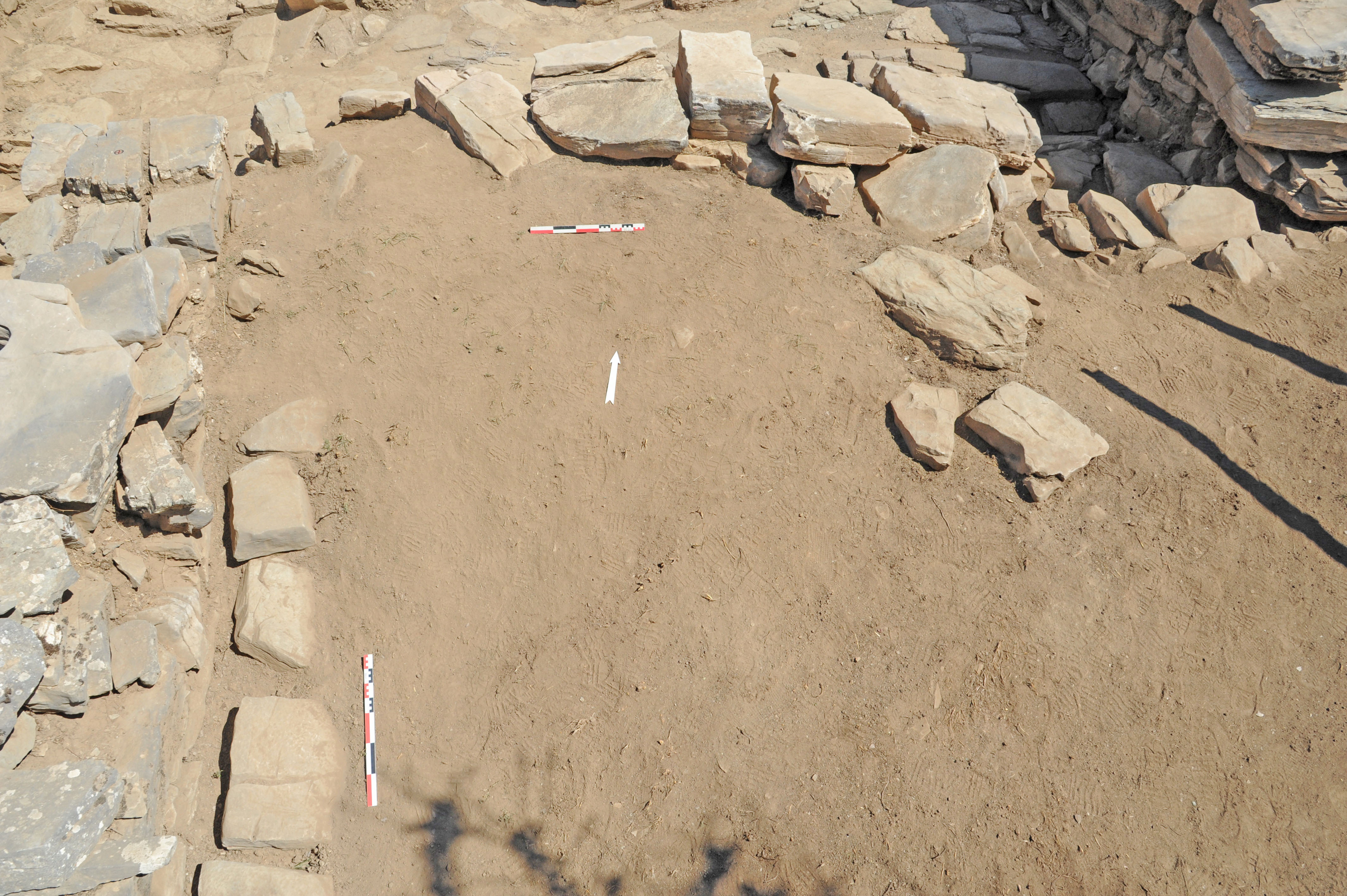 ROOM 47
During the fourth week the excavation of Room 47 continues in South, Central and East wing. The works in the room is combined with the restoration of the north part of the wall which separates the room in two parts (Fig.1). In the North East wing of Room 47 was revealed a part of the paved floor was revealed (Fig.2). Among the finds are included a faience orange bead, two stone tools (pestles), a copper blade of a knife and a part of rock crystal (Fig.3,4). 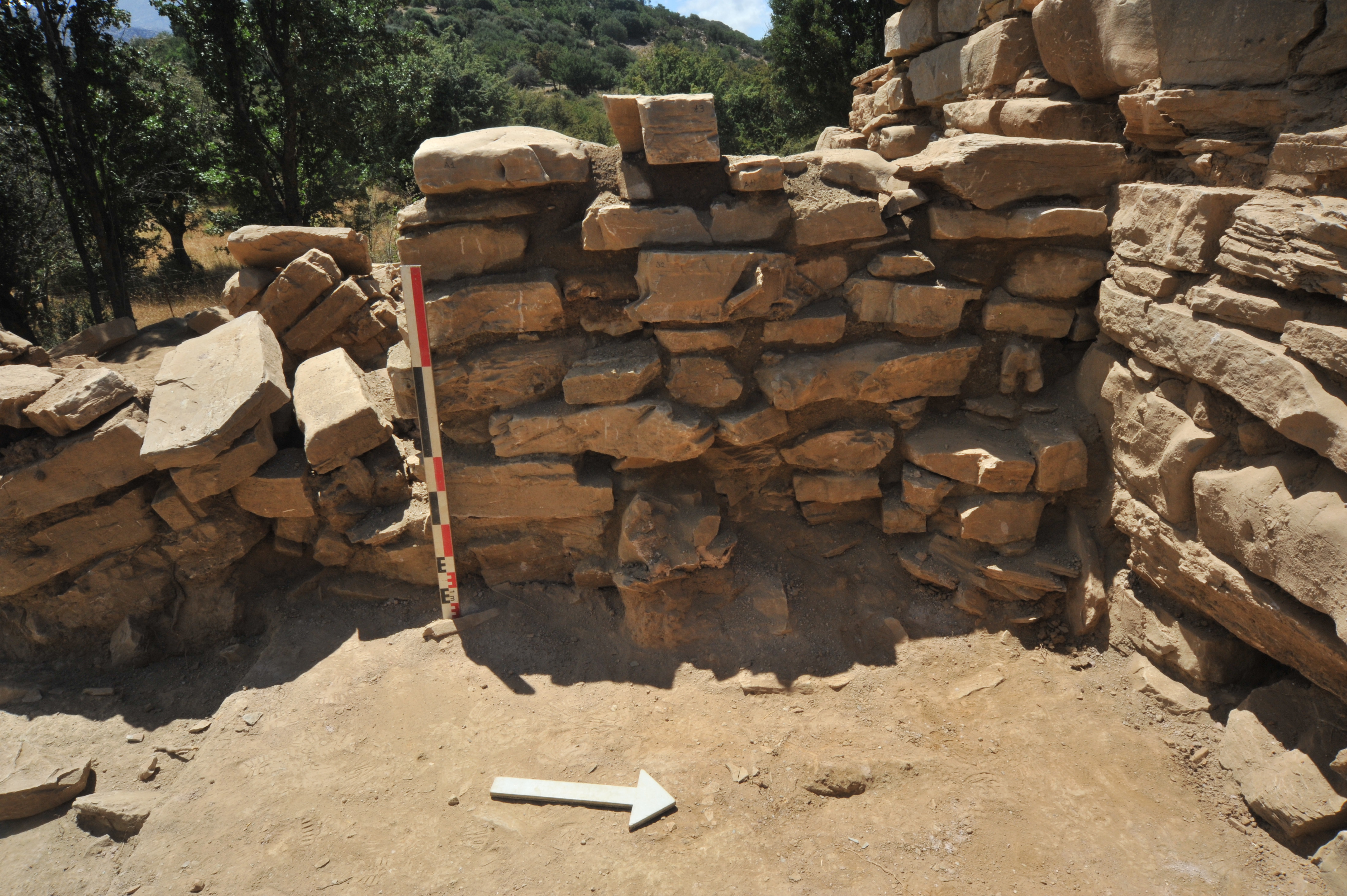 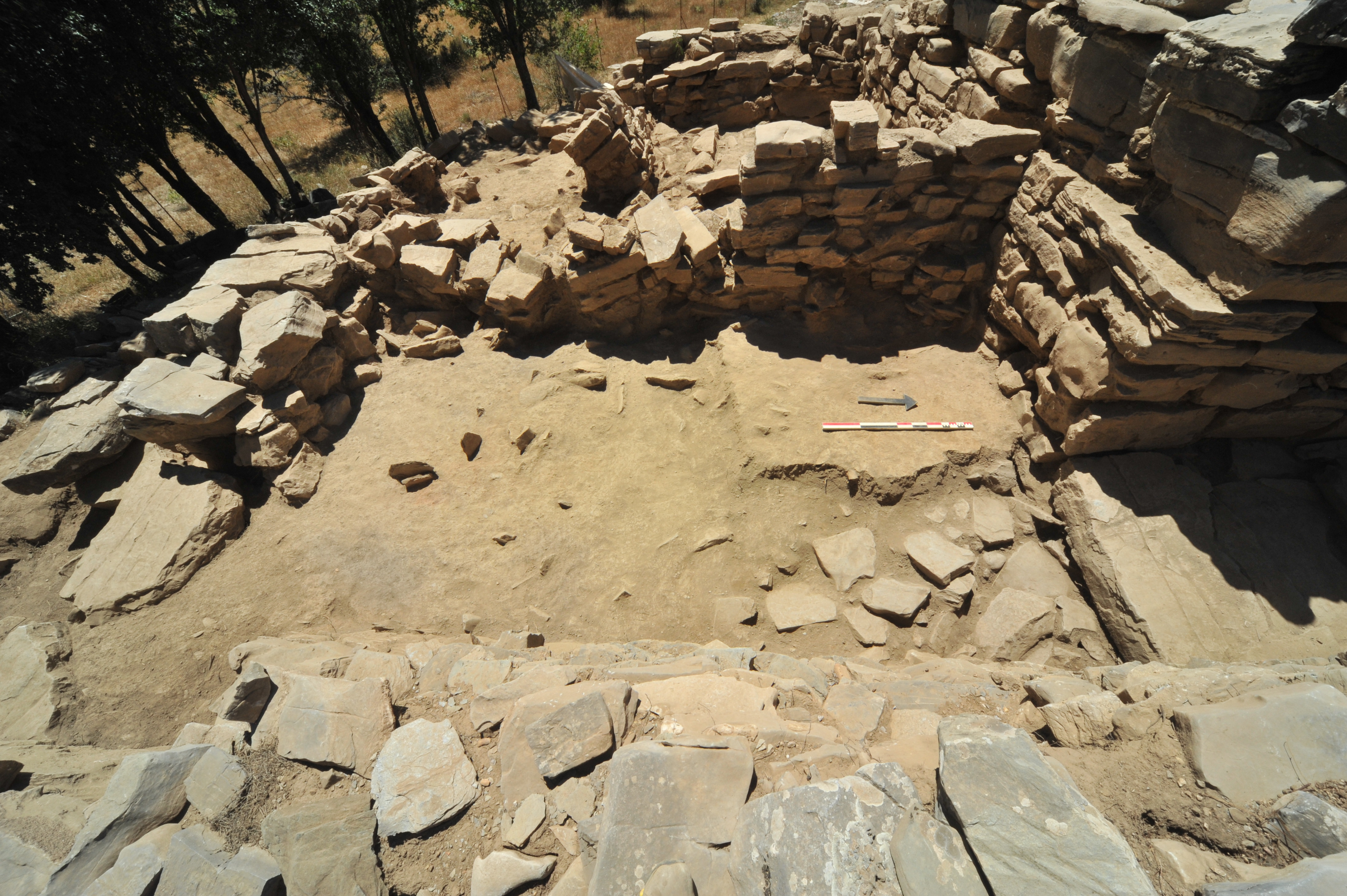 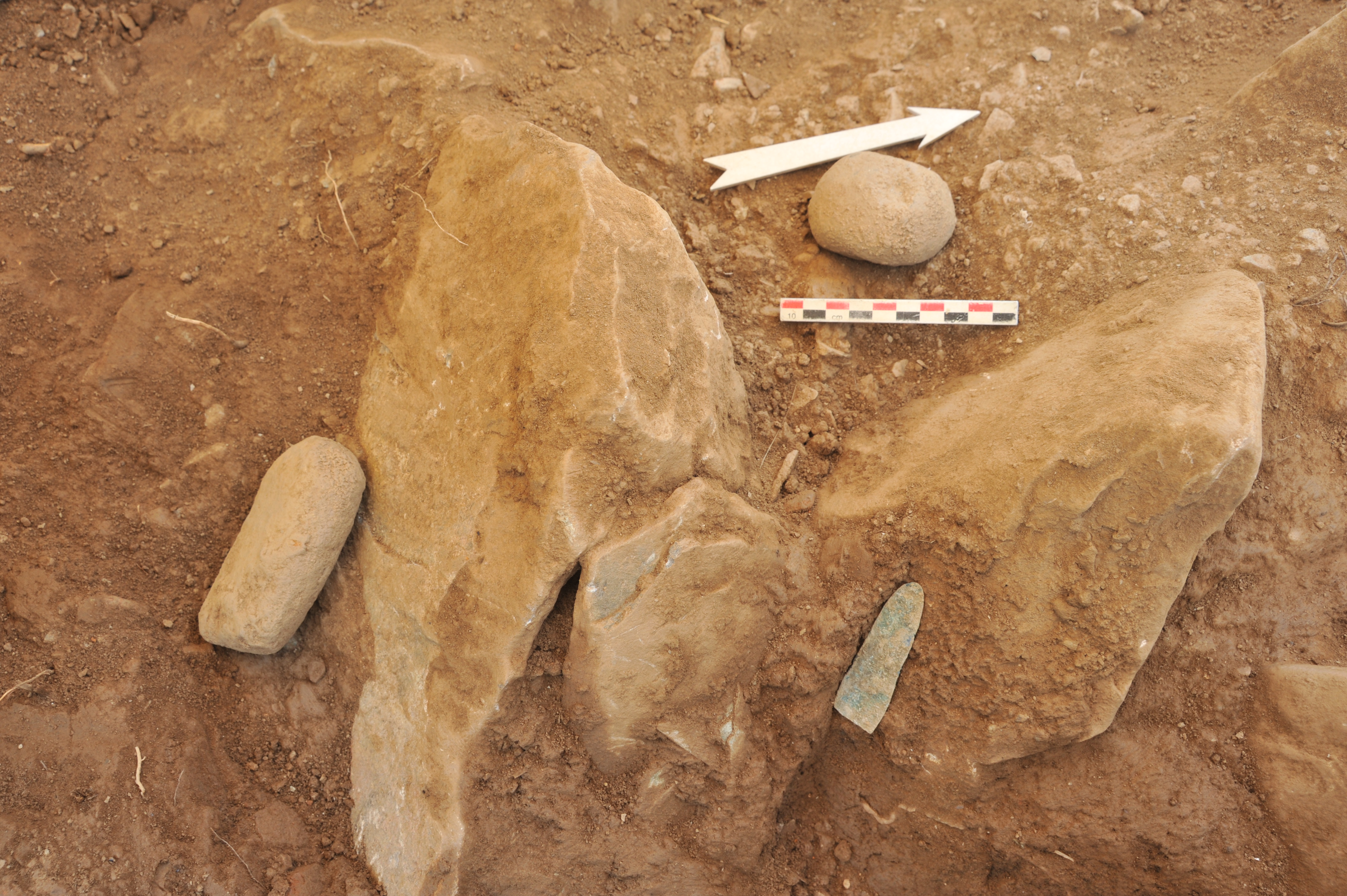 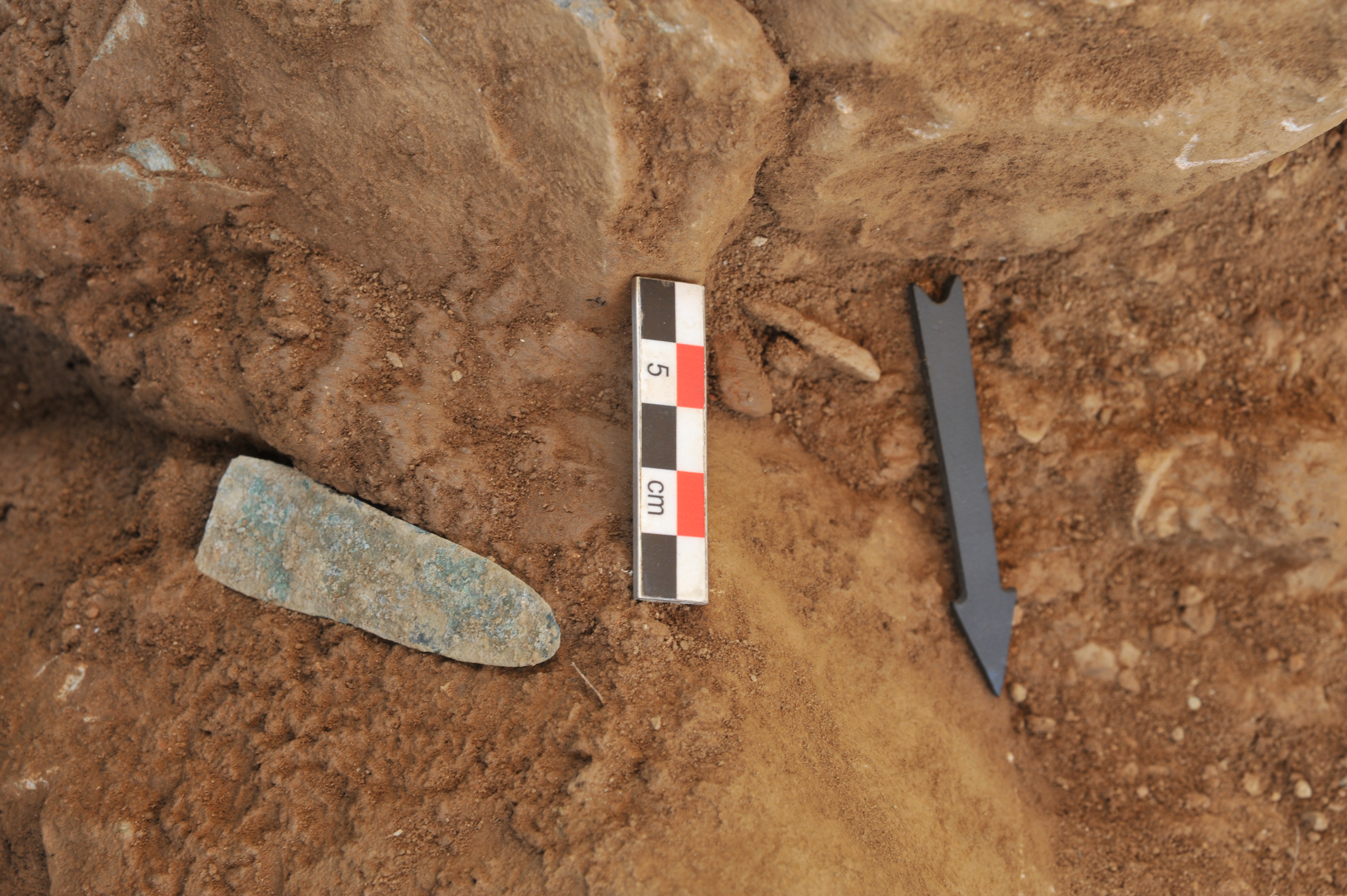 AREA 57A
The excavation continued in the eastern part of Area 57A. A part of the paved floor in the centre and in the north and west part of the room was appeared (Fig.1). In the west part of the area a small stone built construction was discovered. The whole area was plenty of ceramic parts from different vessels in shape and dimensions like small conical cups, pithoi and part of cooking discs (Fig.2). The lower part of the body of a rhyton, a small part of drain pipe (Fig.3), some bones and small pieces of carbon were also collected. 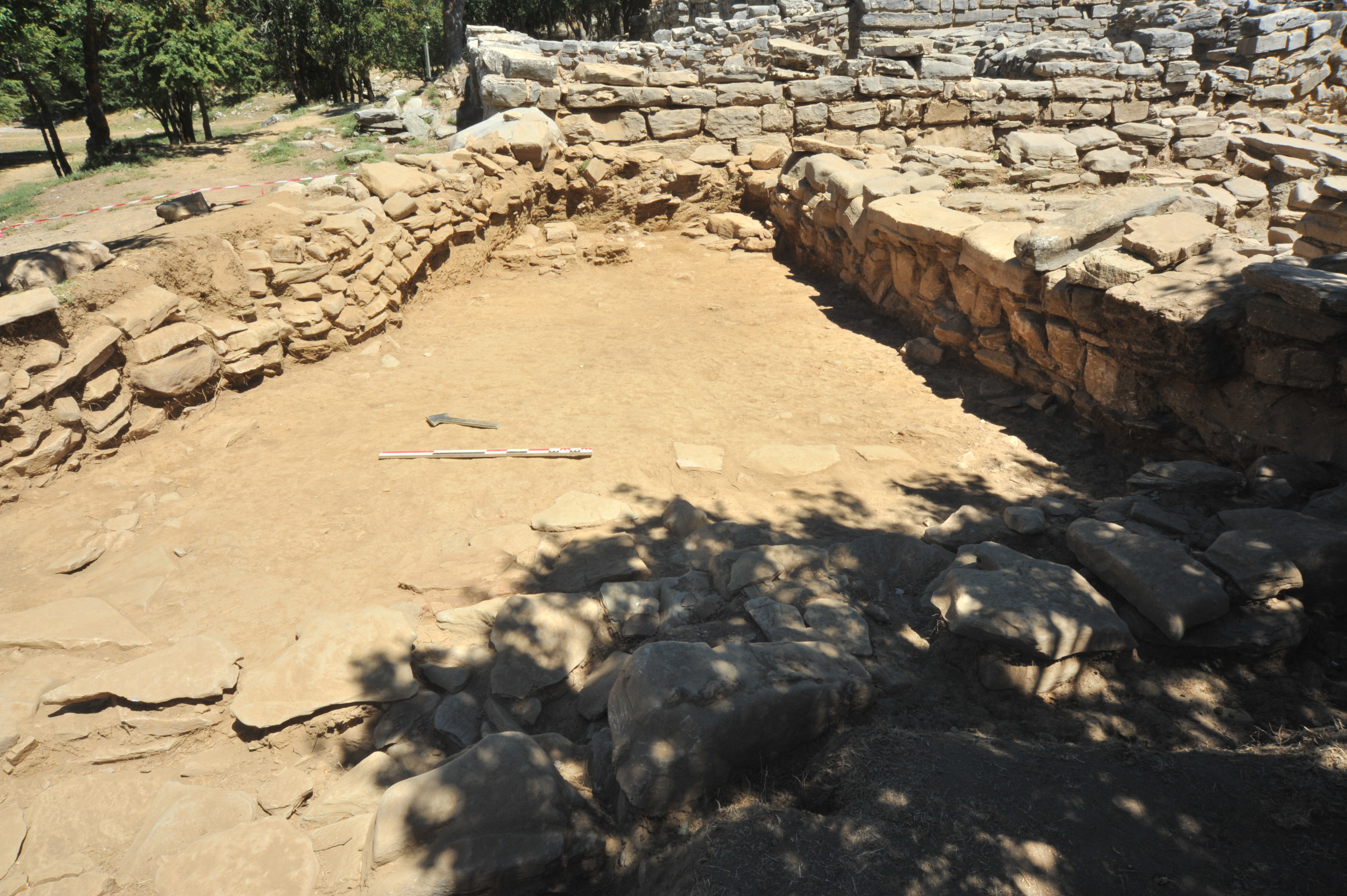