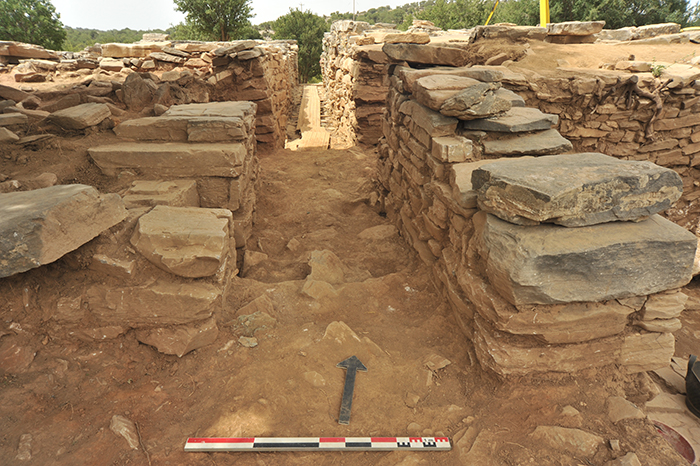 During the second week of the excavation evidence came to light about the crucial role of Corridor 10 in the architecture of the Central Building of Zominthos (fig.1).

The two opening (fig.2) in the south part uncovered this year underlines the high level of technical knowledge that the Minoans would possess in order to construct not only some individual rooms but the Building as a whole (fig.3).

At the Corridor, after the removal of the tree trunk, the third Layer was excavated (fig.1). A lot of pottery sherds were unearthed, among which fragments from conical cups and part of the lip of a pot with a lug handle. Furthermore, small fragments of animal bones and traces of coal were collected. At the area west of the northern wall of Room 13, some stones were found that seem to lean towards the North. They belong to a wall in the same direction with the northern wall of Room 13 (fig.2). This area produced an object with plastic decoration, animal bones and a big amount of pottery sherds. Finally, in the area west of the Corridor 18 the surface Layer was removed and a lot of pottery sherds and animal bones were found as well as stones belonging to the western wall of it (fig.3).

This week at Room 6 Layer 6 was removed while the excavation of Layer 7 was not yet completed. Layer 6 produced pottery, plaster fragments with surfaces of red color and a conical cup. Furthermore, a small foil of gold was located at the western part of the Room. From Layer 7 some pottery sherds were collected, plaster fragments with traces of wood and others with surface of red color. At the central and eastern part of the room schist slabs were found fallen from the upper floor (fig.1). Finally, after the cleaning of the southern wall, its actual shape was revealed.

At Corridor 21 Layer 6 was cleared (fig.2) from which came pottery sherds, a big piece of carbon and some bones. Also, a fragmented pot was recoverd in the southwest corner and a stone processed in one of its sides.

Room 20 is a long and narrow space at the north of Rooms 26 and 53 communicating with them through two entrances. It is a staircase that leads to the upper floor of the building and is oriented from West to the East. It was partly excavated during the 1980s and last year the excavation of its western half was completed and the lower steps that remained in their original position were unveiled (fig.1).

The aim of this year’s investigation is to complete the excavation of the whole Room. By the end of this week’s works the uncovering of the doorstep of the southeast entrance that leads to Room 53 was almost completed (fig.2). Additionally, the fact that some finds where collected along the northern edge of the doorstep, and specifically: carbonated fragments of a wooden beam, a conical cup and a grinding stone (fig.2-3), shows that the excavation is about to reach the floor level.

The excavation of the neighboring Rooms 26 and 53 which contain benches along the walls and a big window that opens to the light well (Room 19) was completed last year (fig.1). It was then noted that the wall dividing the two rooms belongs to a later chronological phase and that the western part of this wall is an even later addition to the structure (fig.2). These facts lead to the suspicion that Rooms 26 and 53 originally formed one big room and that in the place of the middle-wall and more specific in place of its western part there should be a second column base like the one whose base was found in the middle of Room 26 (fig.1).

This season, the western and chronologically later part of the middle wall was brought down in order to investigate the previous assumption. And indeed as expected, under the wall the stone base of a column came to light between the stone slabs of the floor (fig.3-4). Furthermore, under the western edge of the demolished wall a great amount of carbonized wood was collected (fig.4).

During the second week the excavation of Rooms 35 and 40, located at the south/southwest part of the Central Building, began for the first time. A part of a new wall was uncovered (fig.1) that divided the two Rooms and the surface Layer was removed from the interior of Room 35 (fig.2). An opening on the east leads to Corridor 10 while the search for another entrance on the west towards Corridor 36 started. The research of the area will continue.

At the same time the investigation of the interior of the triangular construction in Room 49 continued and reached the level of its foundation (fig.3).

During the second week of the excavation, four more layers were removed in Room 41. A big amount of pottery was found, which includes almost all the Minoan types of vessels. Remarkable are some beautiful painted vases, which are under conservation at the moment. Also, fragments of painted plaster and stone tools were found. At the end of the week, the floor of the room, made of large stones, was revealed (fig.1-3).

In Room 56a the existence of a stone construction in the northeast corner was confirmed (fig.1). A considering amount of pottery sherds and a few conical cups were collected, a few bones and small pieces of coal. Also, clay earth was found in two different spots of the Room as well as limestone gravel which were left in situ.

In Room 56b paved floor was revealed (fig.2). The paving is revealed at the east part of the room. The most characteristic finds of this area were a concentration of conical cups by the northern wall (fig.3) and a small surface of limestone gravel.