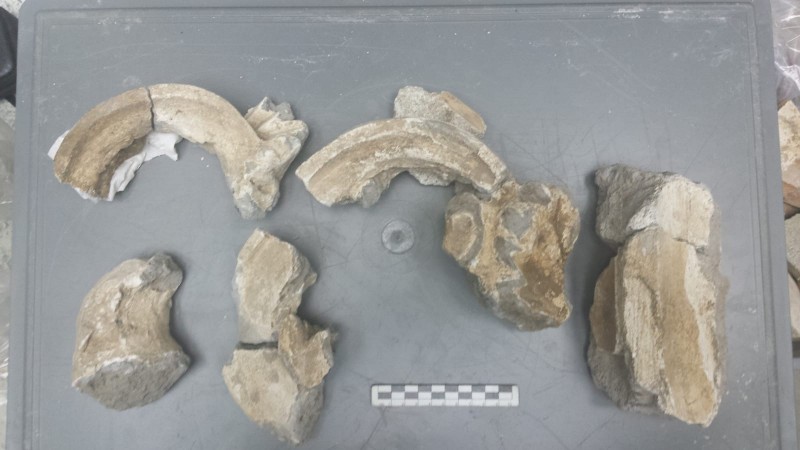 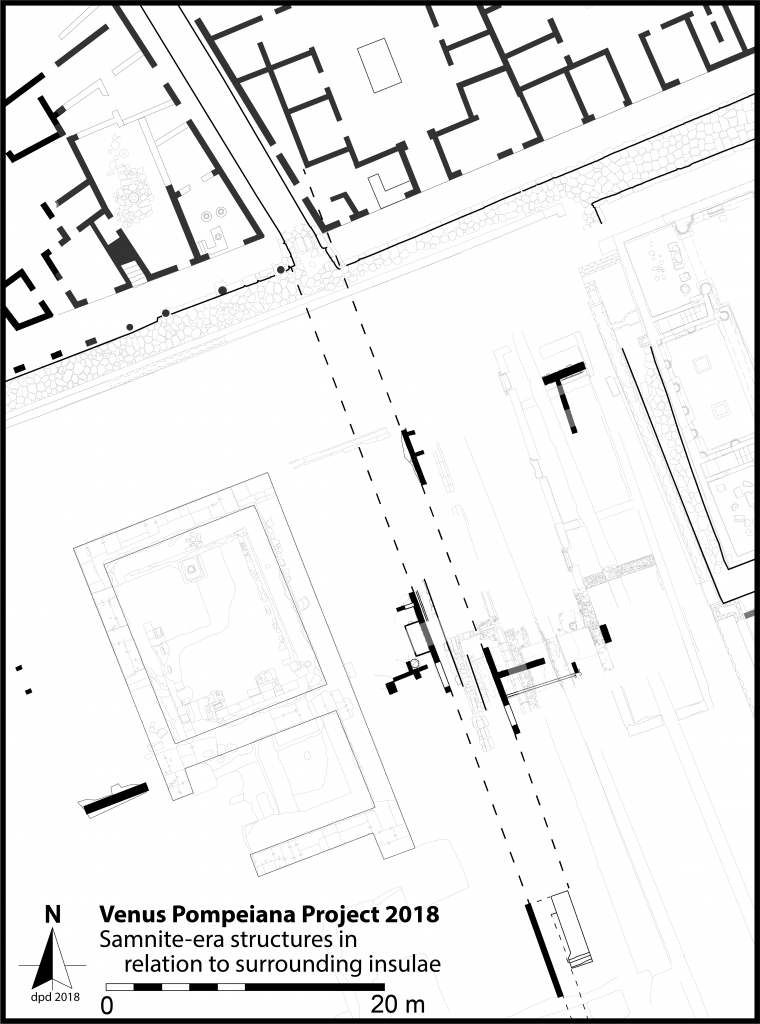 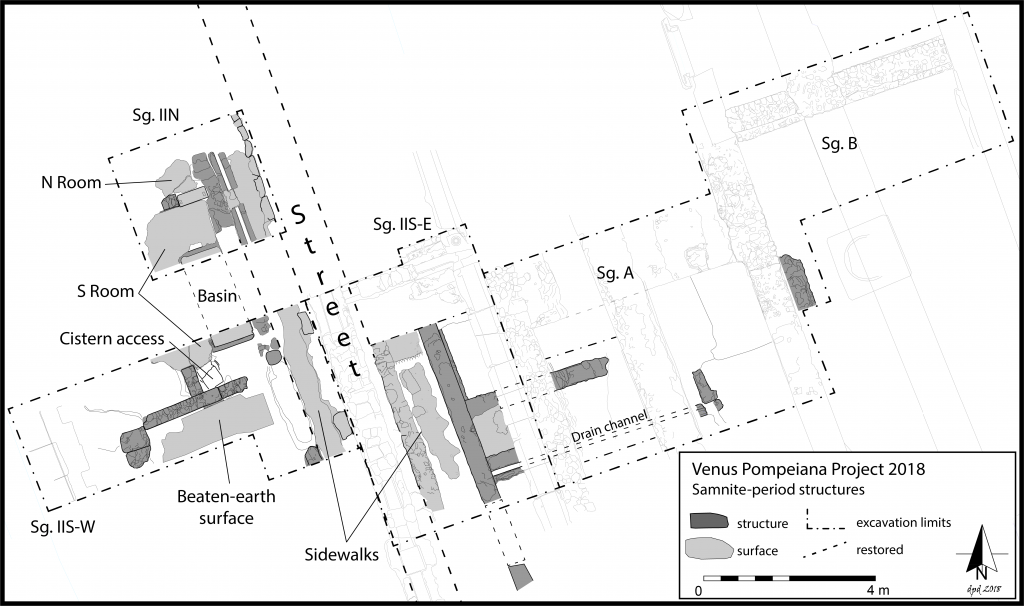 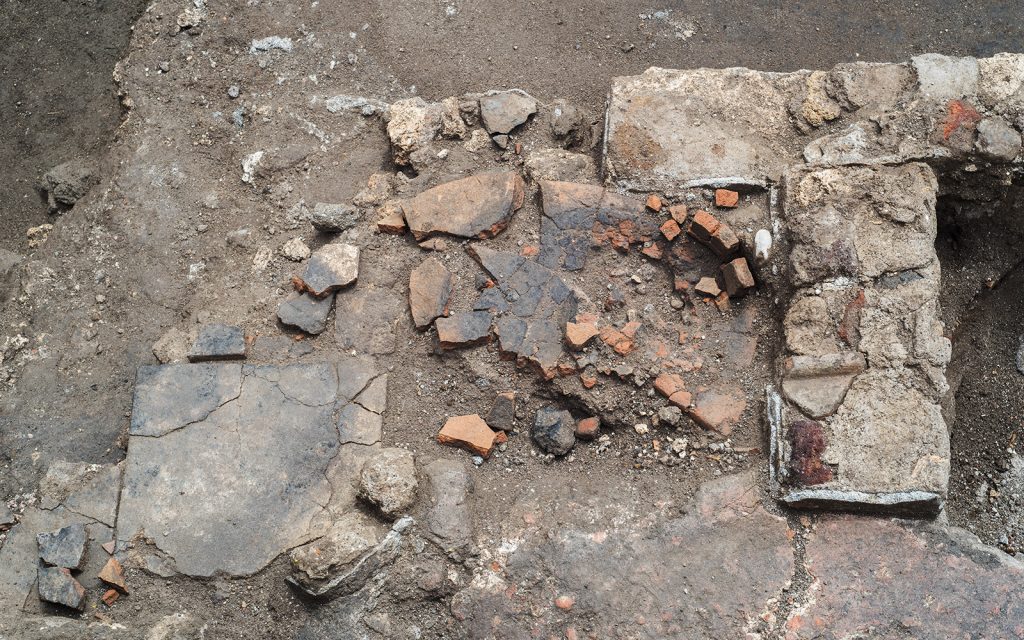 The Roman goddess Venus was the patron deity of the city of Pompeii, and her temple occupied a prominent location at the southern edge of the site, overlooking the river plain below. The Venus Pompeiana Project (VPP) is a collaboration between the University of Missouri-Columbia and Mount Allison University, under the auspices of the Pompeii Archaeological Park, to resume study of the Sanctuary of Venus at Pompeii. Italian excavations carried out between 2004 and 2007 challenged the conventional chronology that dated construction of the temple immediately after the conquest of the city in 80 B.C. by the Roman general Sulla, proposing instead a date in the late Samnite period, ca. 130/120 B.C, but the finds were never fully published. The aim of the new initiative is to bring the existing archive to publication, integrating the old data with 3D survey and targeted excavation.

Expanding on the results of a pilot season in 2017, the team in 2018 continued recording the visible temple podium using digital photogrammetry and reopened more of the old trenches for documentation. We were also able, thanks to the AIA Cotsen Grant, to excavate areas never before explored within the precinct of Venus, which required the shifting of large blocks from the temple that lay strewn across the site. The deposition of these blocks can be dated to the Flavian period, around 79 CE. Under Flavian levels, we documented an Augustan or Julio-Claudian period working surface; levelling fills below included pits containing fragments of Italo-Corinthian capitals in stuccoed Nocera tuff, perhaps belonging to the original temple structure and likely intentionally deposited during its reconstruction (fig. capital fragments).

Further deep fills probably represent leveling for the initial construction of the temple and included artifacts datable to the late second/early first centuries BCE, evidence supporting a Roman date for the temple. We also had the opportunity to excavate a portion of the pre-Roman, late Samnite-period city . Within this area is a north-south street bordered by built sidewalks (fig. Samnite insulae). Projected to the north, this street reaches the intersection of Vico dei Soprastanti with Via Marina, while to the south it aligns with a ramp later vaulted and enclosed within the Roman temple platform. The street was flanked by at least two multiroom structures, of uncertain character but possibly domestic (fig. Samnite architecture; fig. Samnite photomodel). Ceramics found on the surface of the eastern sidewalk, datable to the mid second century BCE, offer a terminus ante quem for the use of the street and the structures associated with it.

West of the street we documented part of a structure with at least two rooms that likely faced onto the street. The southern room contained a large shallow basin in cocciopesto and access to a subterranean cistern, found closed by a slab of Sarno limestone and not yet excavated. South of this room was a beaten earth surface, which produced chronologically significant materials, including a fine-walled beaker and thirteen coins, among which are three imitation Ebusus types datable between the late second century and 80/70 BCE and a halved denarius minted in 85 BCE. Probably contemporary with this surface are two successive hearth features made of a repurposed louterion and tiles, the second of which blocked access to the cistern (fig. tile feature).

The VPP team plans to return to the site in the summer of 2019 to excavate the Samnite subterranean cistern, whose fills could reveal important clues as to the nature of the occupation of that city-block.