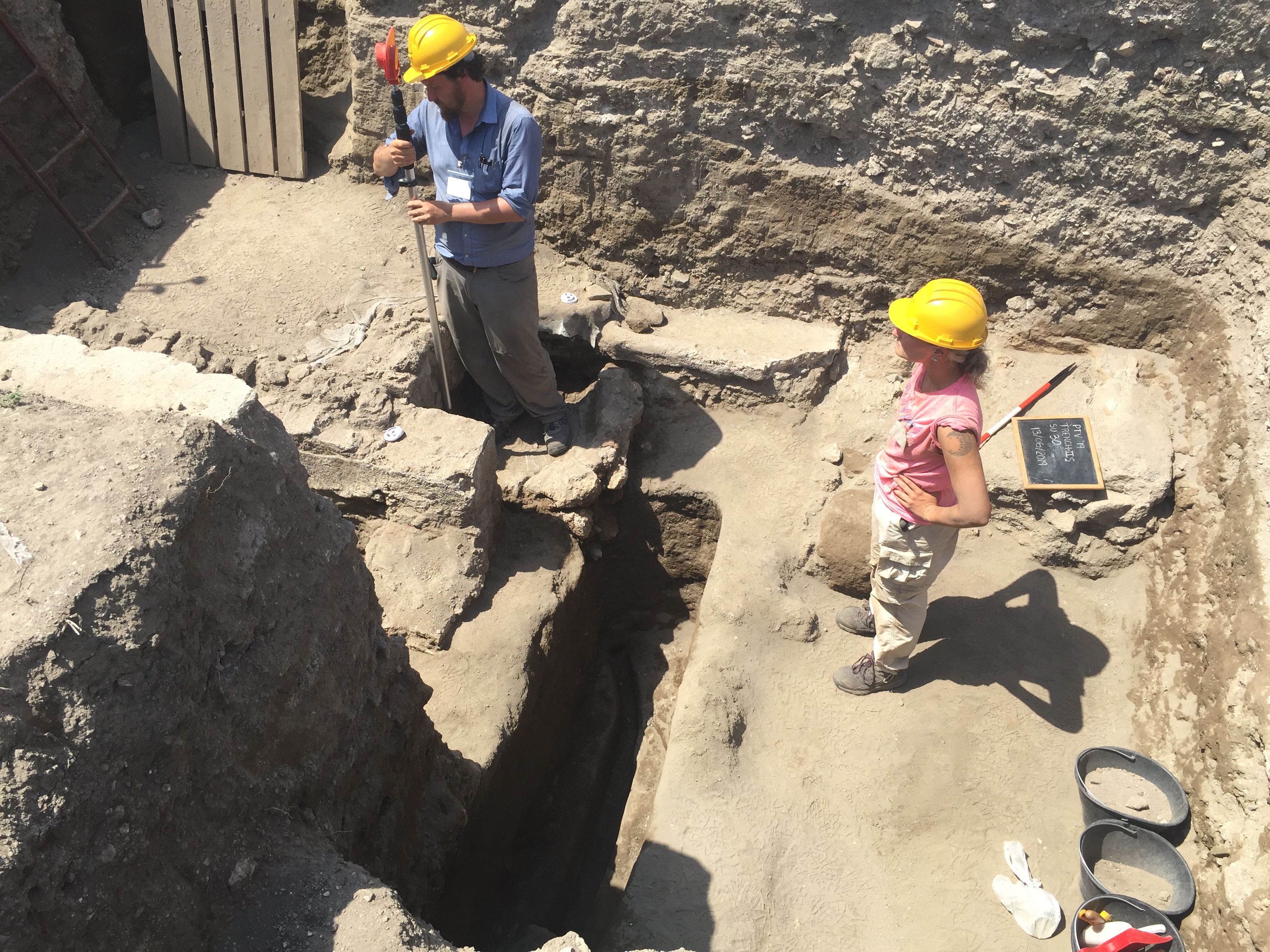 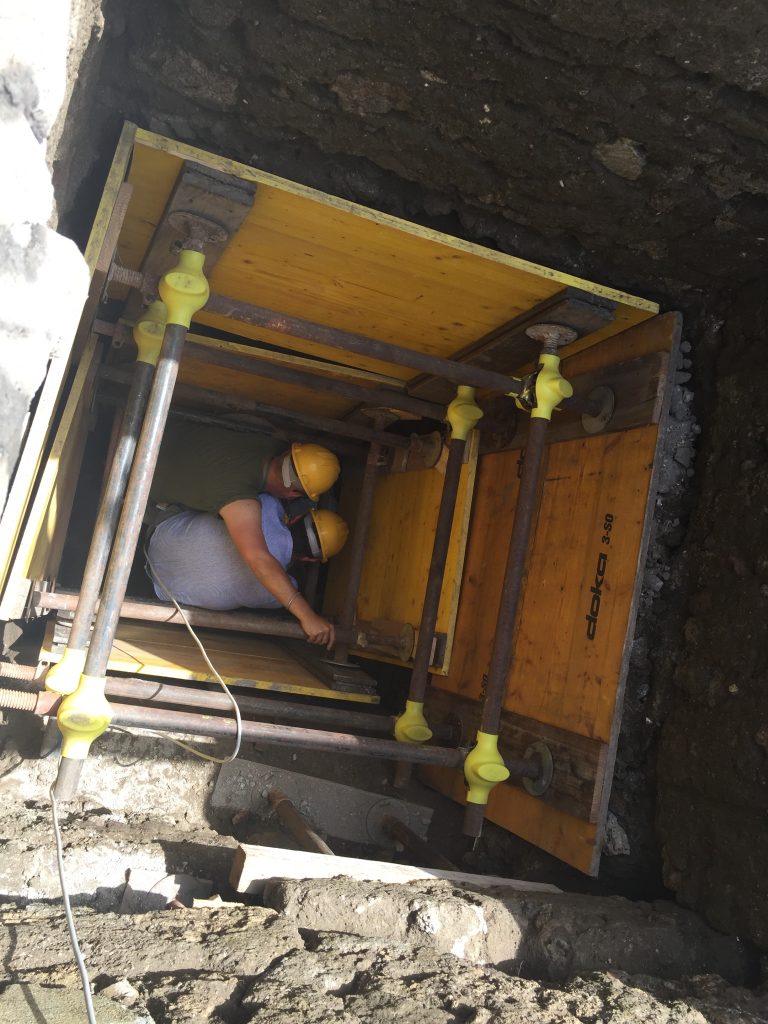 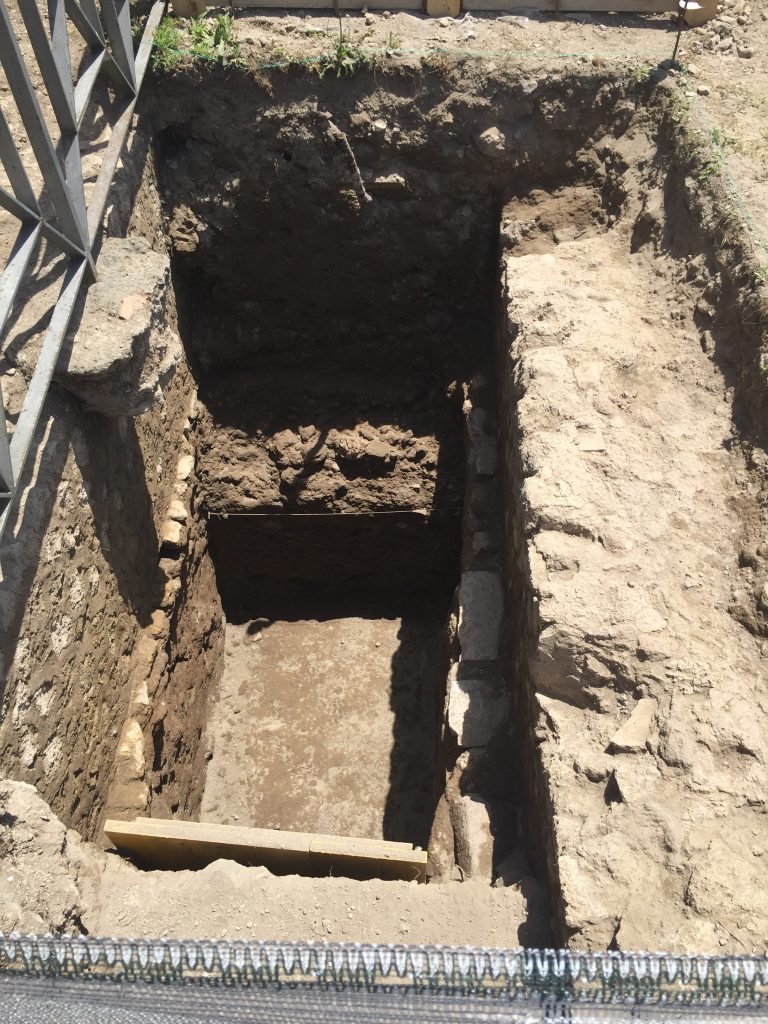 Week 4 (June 10-15) has been full of surprises! In two of the trenches (IVN and IIS)We brought work  to conclusion, revealing unexpected finds. In the east portico, we also opened another area (Trench I) in order to integrate the spatial data coming from Trench C, where we plan to focus excavation activities as we close shop next week.

In Trench IVN we finally reached the natural bedrock (Figure 1). Careful restudy of the materials from excavations carried out in 2005 in the area to the west of the temple, underneath the open court of the sanctuary, has revealed fragments actually join with fragments from the bottom layers excavated by us (Figure 2). This confirms that the sequence of building debris and soil below the temple and the area around it filled a large artificial cut (to quarry volcanic material?), making the presence of an earlier shrine in that part of the site unlikely.

In Trench IIS, in the sector west of the late Samnite alley, we identified a linear cut aligned with the boundary wall of the block. Having removed the small and late party wall whose rubble foundations had been clearly laid through the fill, we eventually exposed a deep covered channel sloping from the south and continuing toward the round shaft (Figure 3). It has now become evident that its function was to feed the round feature with water coming from a catchment area located further south (an atrium?). A closer look to the photomodels of the interior of the round shaft demonstrated the presence of a hole, patched up when what was originally a cistern functioning with the shallow cocciopesto basin nearby was repurposed as a dump in the final phase of occupation of the room.

In Trench C, we came down to the horizon below the preparation layers of the Vicolo di Championnet. Occupation features, such as small post holes and charcoal and pottery concentrations, are visible on the surface (Figure 4), but at the moment they cannot be associated with structural remains. The same sequence is visible in the south section of a sounding excavated in 2004, which we reexposed to record (Figure 5).

This week we received a visit from Prof. Elaine Gazda (Michigan) on June 10, while Dr. Bruce Robertson (Mount Allison University) spent the week enjoying multiple on- and off-site tours with our staff and students.