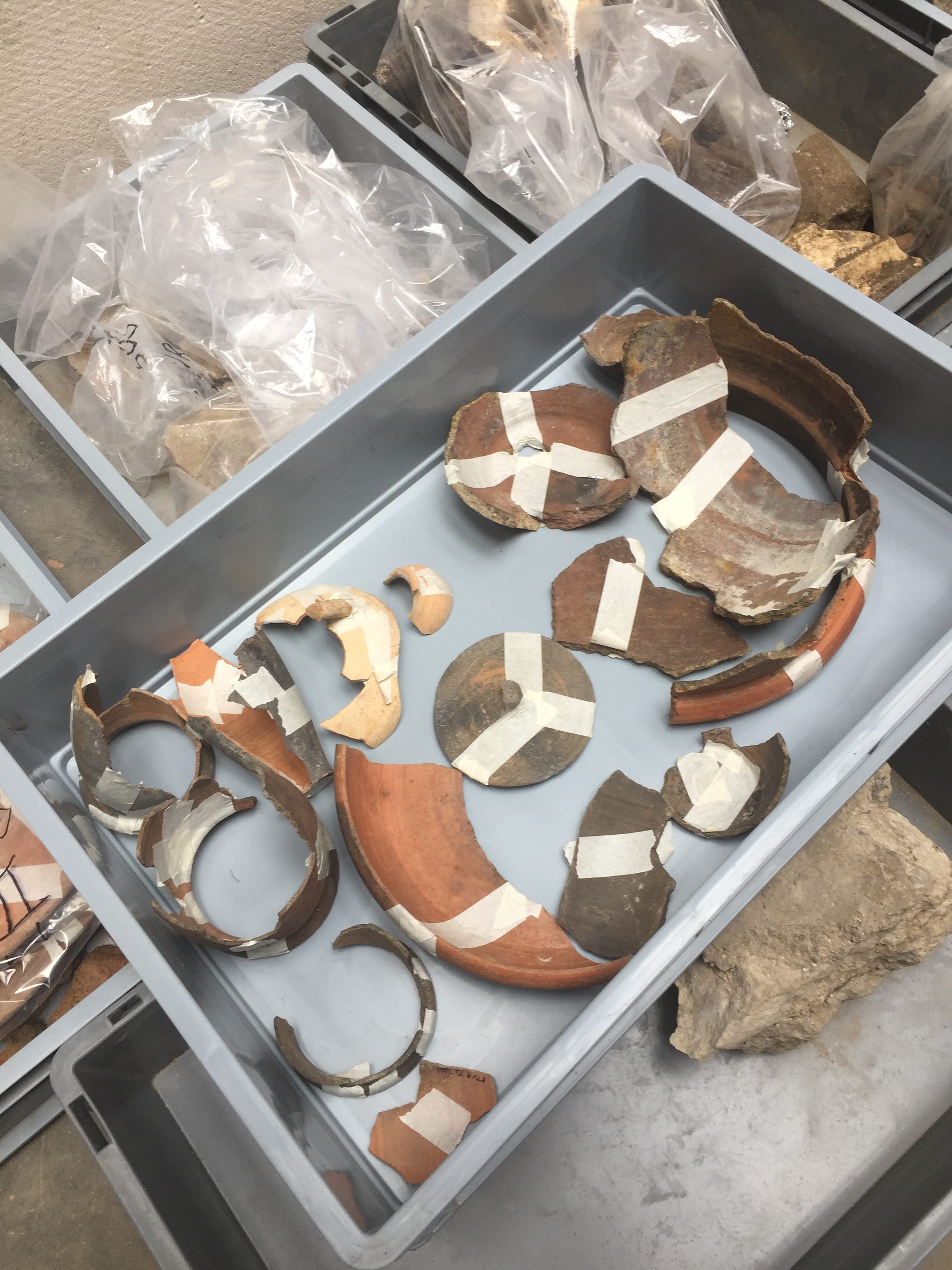 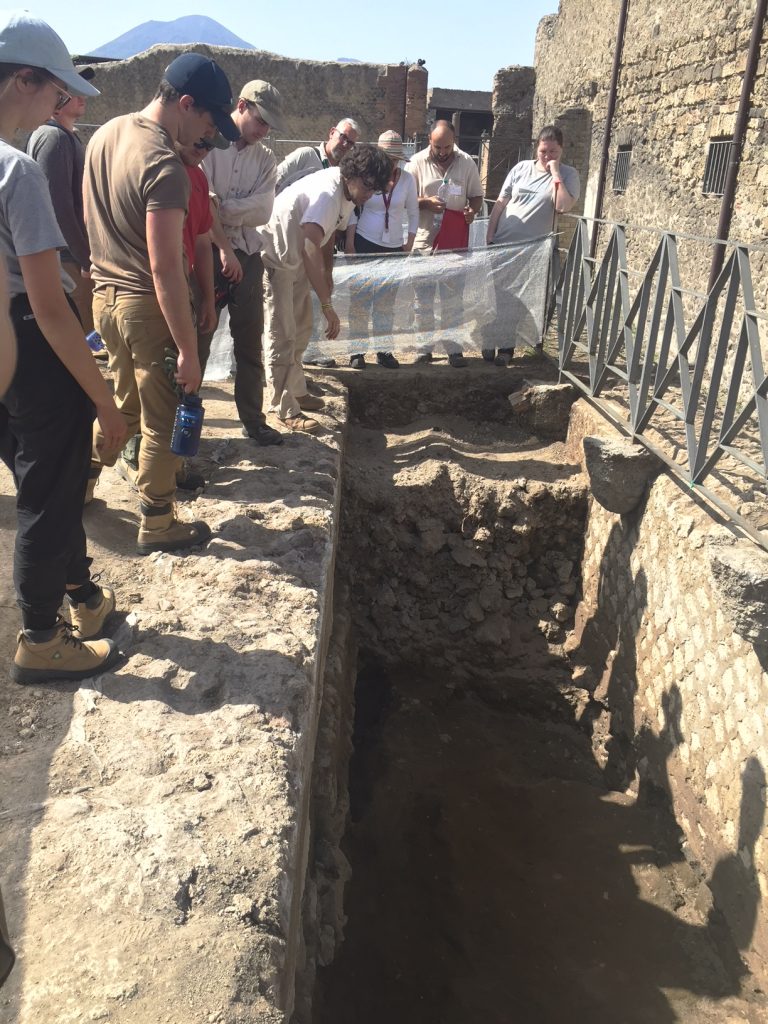 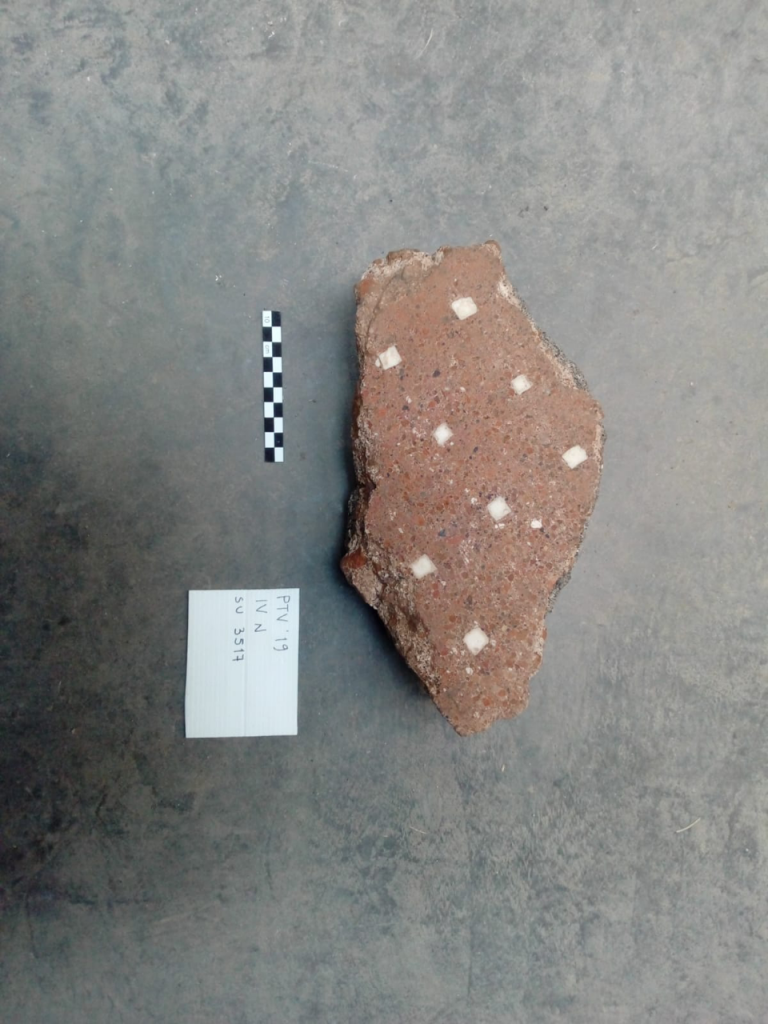 Summer has finally come to Pompeii! With the hot weather in Week 3 (June 3rd-7th) we have been able to work without breaks, making progress on all of the excavation fronts, and thus adding new data on the building phases of the sanctuary and the broader neighborhood.

In Trench C, we came down to the compact preparation layers of the Vicolo di Championnet (Figure 1), which showed evident traces of the spoliation not only of the pavers (some were removed for the construction of the Flavian precinct wall), but also of the sidewalk and sewer originally connected with the street (whose presence is documented from earlier excavations further north). Below the remains of the street, tantalizing portions of earlier stratigraphy are visible, including a beaten surface rich in charcoal probably relating to occupation activities. The evidence seems to suggest that the Vicolo di Championnet had no predecessors, and that it was created ex-novo at the time of the construction of the triporticus in the Roman period.

In Trench IIS, too, work focused on clarifying the topographic organization of the area in the Samnite period. Having completed the excavation of the fills of the cistern, we turned our attention to the alley that subdivided the two contiguous city blocks later obliterated by the Roman sanctuary (Figure 2). To that end, we re-exposed a stretch of the W sidewalk discovered last year (see Week 4 2018), and excavated its construction fills. The feature appears to have been built directly on top of natural deposits, indicating that the street did not have earlier phases. Meanwhile in the finds lab we are studying the ceramics recovered from the shaft (Figure 3), which place the initial abandonment of the structure in the mid-1st century BCE.

In Trench IVN, by arming the sides of the sondage within one of the concrete boxes supporting the cella floor, we were able to reach a depth of 4 m, documenting the dumping sequence on top of which the temple podium rests (Figure 4). This consists of debris from the demolition of buildings that stood in the area alternating with lenses of fine soil with fewer inclusions (Figure 5). Given that they continue below the level of the late Samnite foundations documented in the nearby areas, it is possible that the lower layers fill a large cut for spoliation or quarrying of building materials. Pottery finds from these deep deposits also confirm the post-80 BCE date for the construction of the temple.