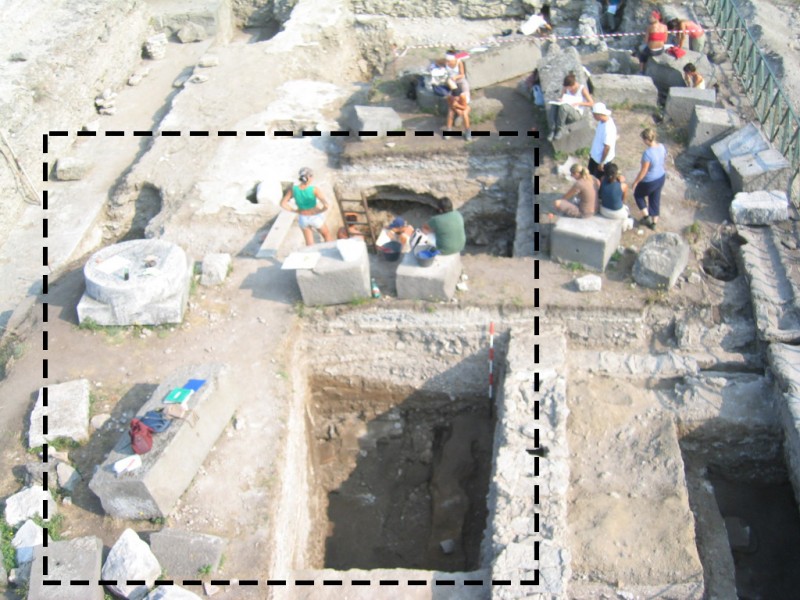 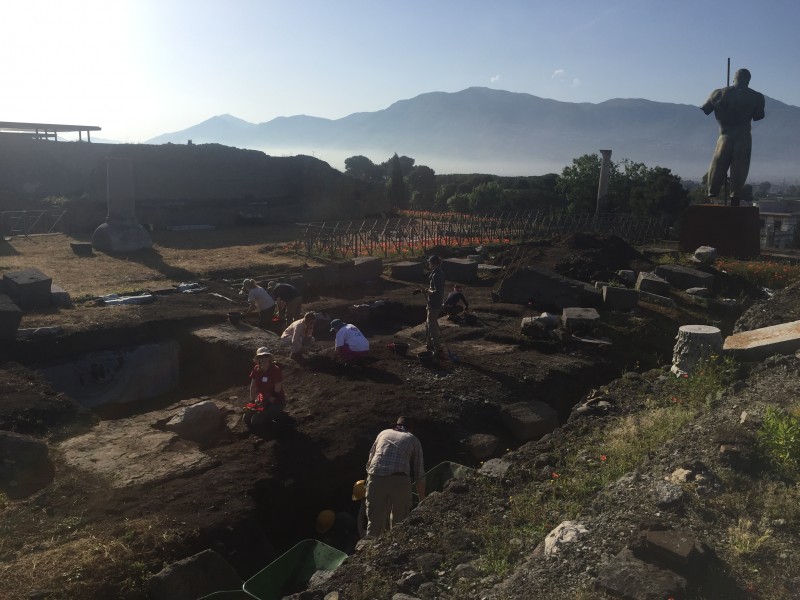 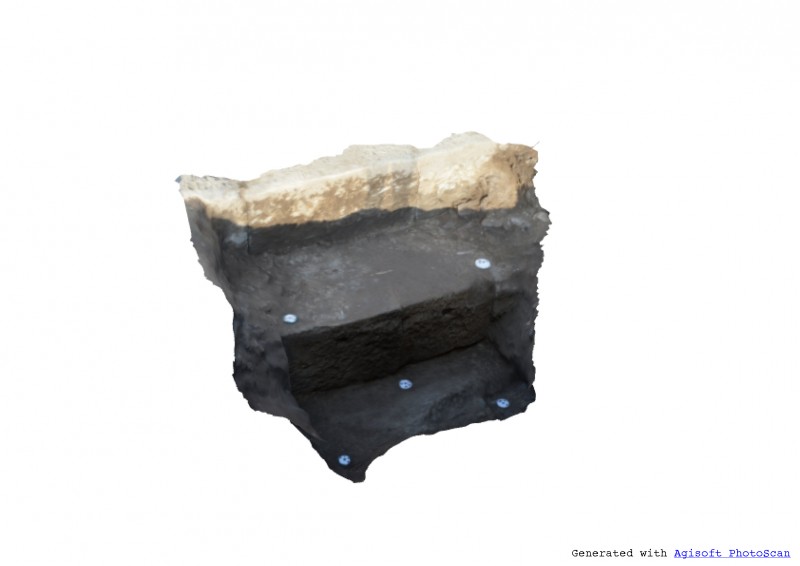 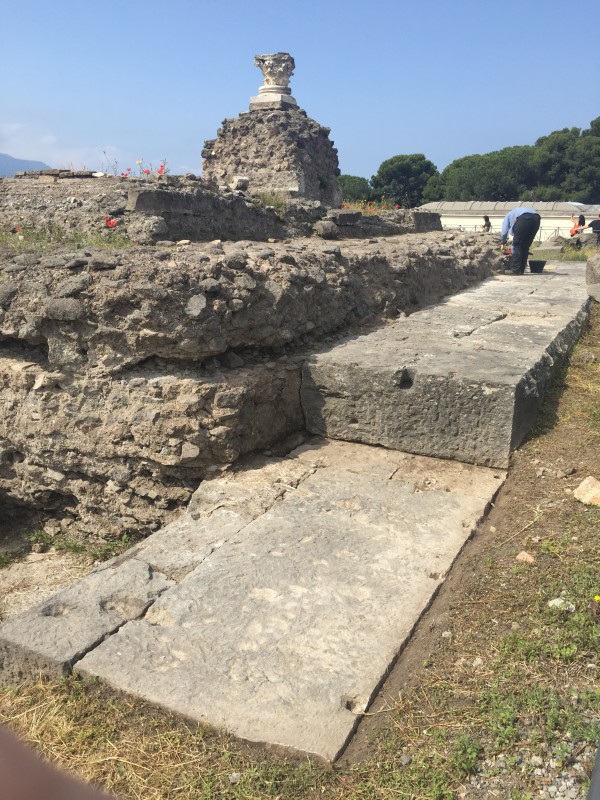 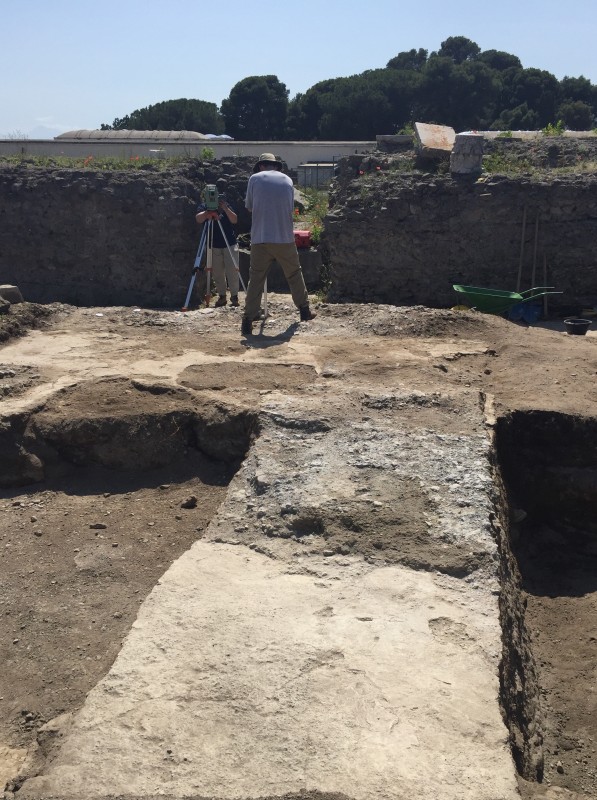 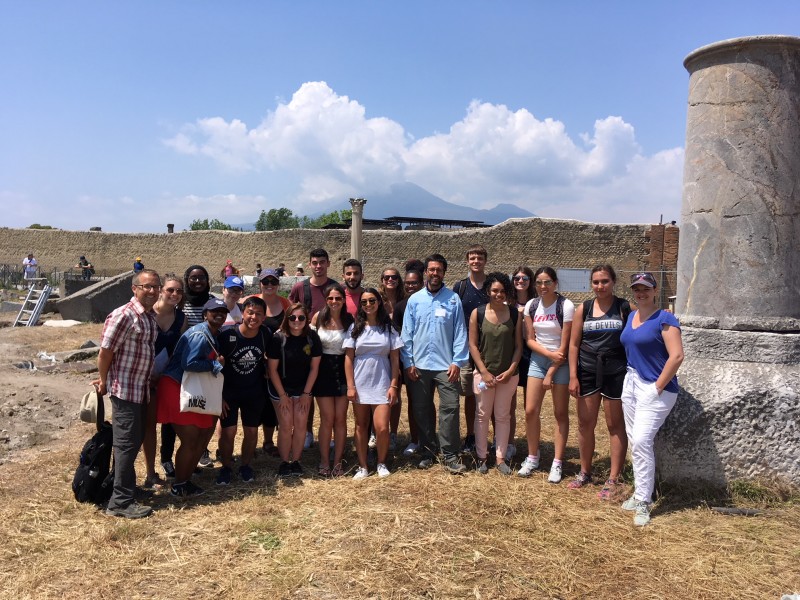 Week 1 of the Venus Pompeiana Project (May 21-May 25) has been fun and rewarding. We got to meet the group of 17 students and volunteers from several Canadian universities who are joining the team in 2018. From day one, their energy and enthusiasm for work has been key to a successful first phase of activities both on site and in the lab.

This photo from the archives of the Pompeii Archeological Park (Figure 1) shows the state of the E court of the sanctuary of Venus in 2006 during Curti’s excavations. Architectural features dating to the Pre-Roman phase of the precinct are visible in the exposed cross-sections and at the bottom of the two trenches in the area delimited by the dotted line (they are named Trenches IIN and IIS). One of the initial goals of the season was to reopen them in order to redocument and survey the traces of early occupation.

First, huge blocks and unfinished architectural fragments from the Flavian temple (note the trachyte blocks and the marble column base) had to be moved – the task was carried out by our safety engineer Carlo Monda and our contractor Terrae srl. Completion of this preliminary operation has allowed us to start working in this sector of the sanctuary in much safer conditions (Figure 2).

The first digital recording project to be concluded was the photogrammetric survey of one of Curti’s sondages along the E side of the temple podium. This had brought to light the bottom two courses of the trachyte ring that lined the concrete core of the structure. We excavated part of the original fill left in situ, thus bringing to light the concrete substructures on top of which the blocks rested. They are visible in this snapshot of the 3D photomodel (Figure 3). Photogrammetric work will continue on the N side of the podium (Figure 4; the S and E faces were surveyed in 2017).

The clearing of the block field in the E court has also exposed sections of the stratigraphy that were never investigated before. While we continue to remove the backfill from Trenches IIS and IIN, we plan to integrate the previous finds with new data sampled from the intact layers W of Trench IIS (Figure 5).

As a nice cap to the week, on May 25 we were happy to welcome Prof. Ross Wagner and his students from the Duke In Rome program for a special tour of the site (Figure 6).