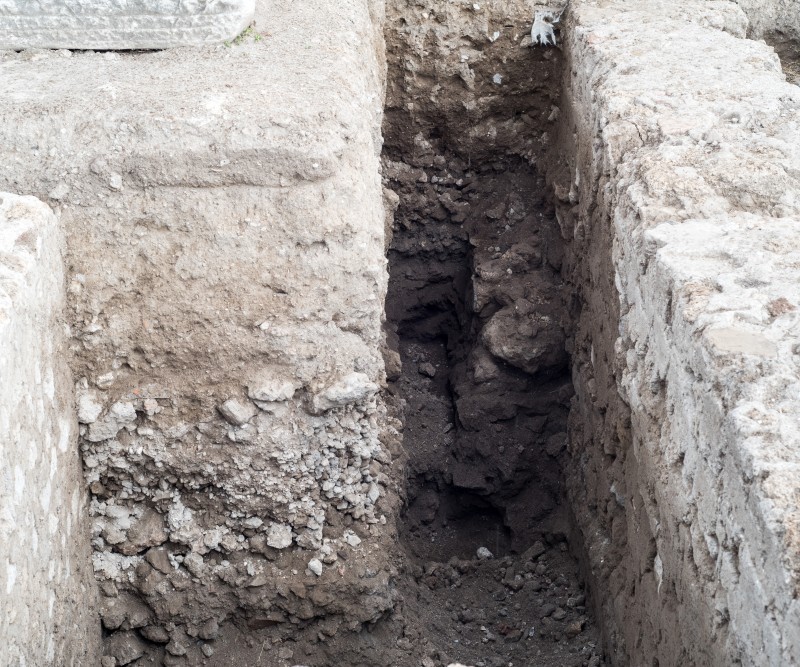 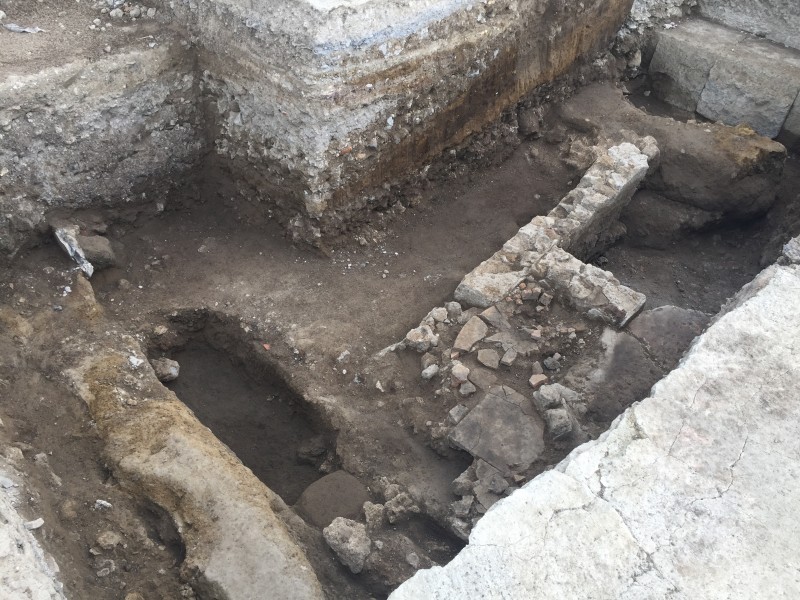 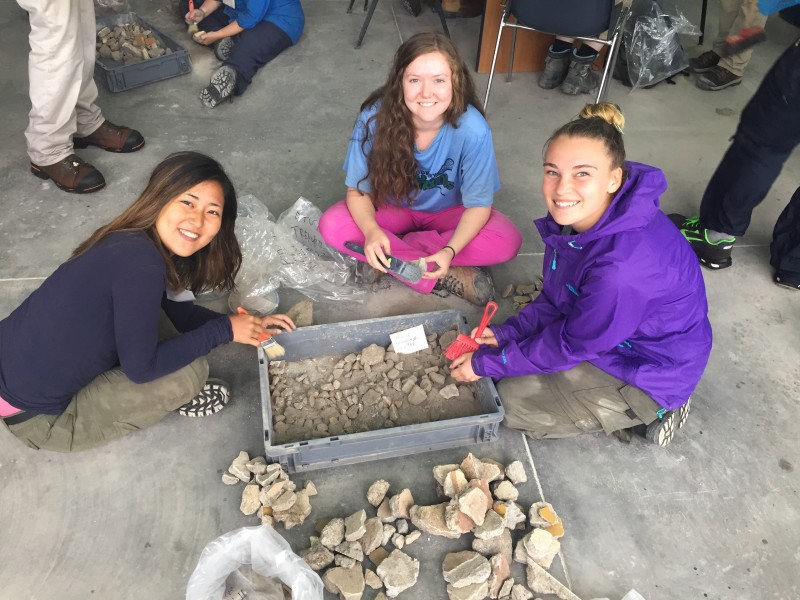 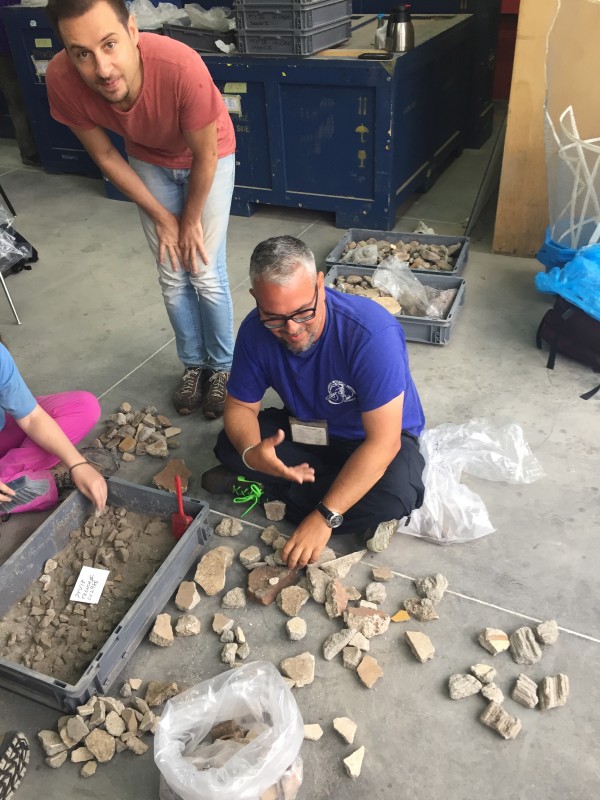 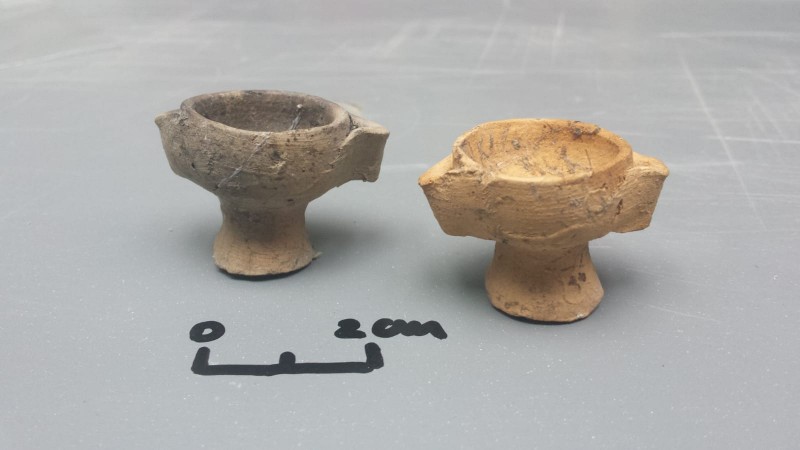 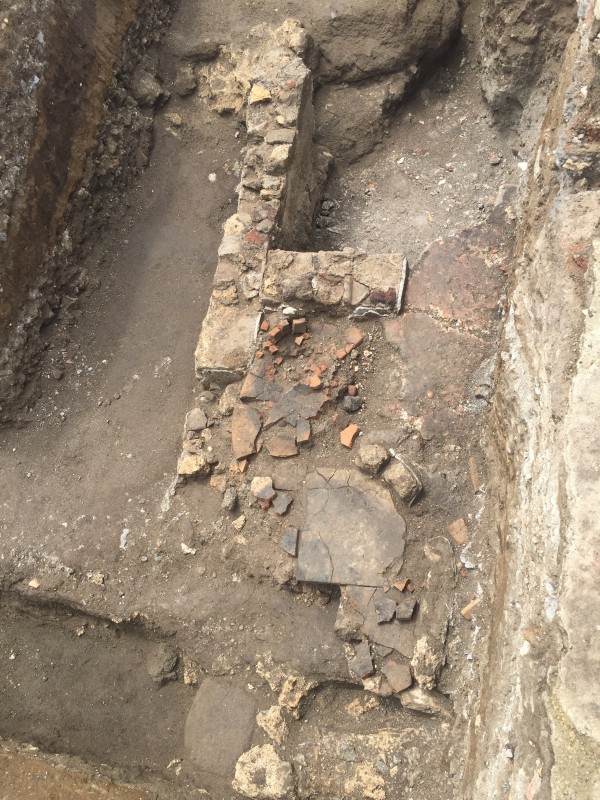 Week 4 (June 11-15) has brought us some interesting finds that will enrich the picture we have of the neighborhood for the period immediately predating the monumentalization of the Sanctuary.

Work in Trench B focused on the sector delimited by the foundation of the party wall of the original E portico and the structure that replaced it in the Flavian reconstruction. The latter was built up using the same opus reticulatum technique seen in the superstructure, demonstrating that the construction fills below the early Roman floor level had been completely removed before the area was backfilled again. The excavation of the Flavian deposits revealed a foundation incorporated in the early Roman structure and presumably truncated in the final phase (fig. 1). The foundation, oriented N-S, was probably part of the same complex whose remains were found in Trench A in 2017, just E of the N-S street that divided the neighborhood into two city-blocks.

In Trench II S we reached the 2nd c. BCE levels across the entire sector. We identified and emptied the spoliation trench of the N-S wall separating the building from W sidewalk of the street, revealing parts of its original foundation (pappamonte blocks) and superstructure (in clay-based mortared rubble of limestone revetted with plaster) (fig. 2). This wall seems to be the earliest feature so far attested in the area. W of it are other walls built with limestone opus incertum paved with cocciopesto, badly damaged by a large and deep spoliation cut filled with building debris and ceramics (SU 2986). Special finds from the obliteration layers included frequent fragments of plaster decoration in the First Style, pertaining to both walls and ceilings (fig. 3-4), and miniature vessels (fig. 5).

In its last phase of occupation, the structure was repurposed to accommodate at least two separate tile features, which can be tentatively interpreted as fireplaces or ovens (fig. 6). In the final week of work at the site we will concentrate on the study of this sector and associated deposits.

We had more visits from friends and colleagues, including the UGA Rome program led by Elena Bacchielli. Last few chances to come see us! We will start backfilling on Thursday June 21.