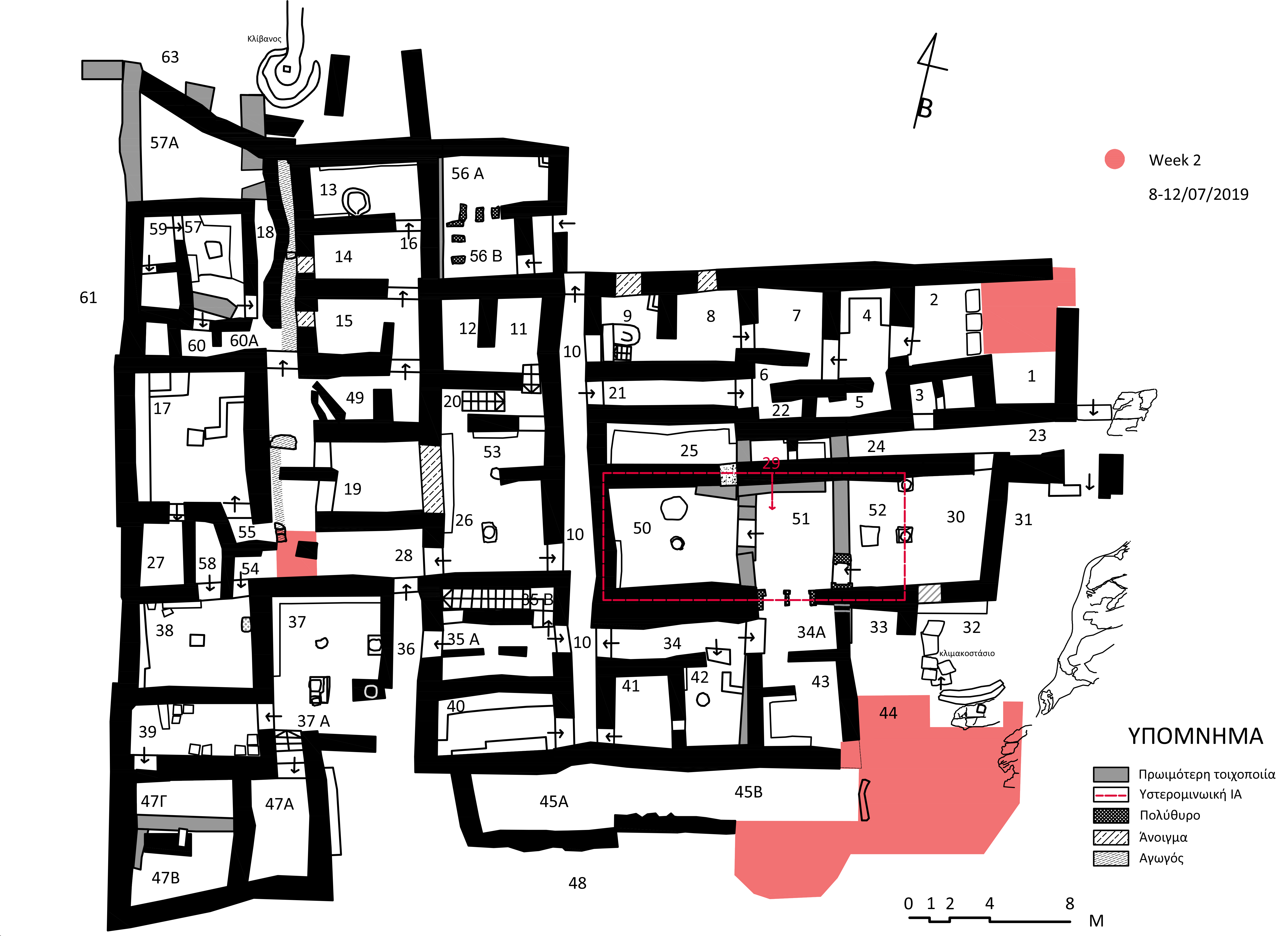 The excavation of Room 1 began last year (small scale excavation had already been conducted in 1980s) and continues this year (Fig. 1). The large concentration of LM IA conical cups and other vessels that had already been revealed and collected last year continued at deeper layers at the center and eastern part of Room 1 (Fig. 2). Many of the new conical cups that have been recovered are intact (in some of them animal bones have been found in their interior) but the rest bigger vessels such as cooking pots, pithoi and parts of a vessel with holes (Fig. 3) are found fragmented. Lastly, a sherd of the Mycenaean period was found in the upper layer to the north west of the room.

During the study of the pottery collected in previous years from Room 28, part of a tablet has been found with hieroglyphic / Linear A symbols.

The tablet came from the south west side of the room (Fig. 1), below the level of the new palace paved floor next to the stone overflow pipe. Therefore, the excavation of Room 28 continued in the lower level.

So far, many pottery sherds, some animal bones, plaster parts with blue and red (Fig. 2) surface, a small sized quartz rock and a cup from the old palace period have been found.

The excavation of the space south of Area 32 (Fig. 1) is almost completed. Small quantity of pottery sherds, some animal bones and a fragment of iron stone have been found.

In the already excavated Room 43 work resumed last week in order to reveal possible remains of the disturbed southeast corner of its walls. Indeed, this small-scale investigation brought to light the base of the missing parts of the south and east walls (Fig. 1). An interesting small find was made there, namely the broken, hook-like ending of a bronze artefact (Fig. 2).

During the second week at Area 44 and Area South of Area 44 the excavation is finished. At Area 44 (Fig. 1) traces of a possible wall are revealed at south part of the area (Fig. 2). The finds are courseware and fine pottery, animal bones, parts of plaster, parts of conical cups and part of an egg cup (Fig. 3).

At Space South of Area 44 (Fig. 4) the excavation is finished with the reveal of natural rocks. Shreds of pottery and animal bones are collected.

Room 48 is the area to the south of Room 45A-B whose exact western, southern and eastern limits are not yet clear. The western and middle parts of this area were excavated during last year’s season. Work continued last week in the yet unexcavated eastern part with the complete removal of a disturbed surface layer (Fig. 1), which yielded pottery fragments of Middle Minoan I – Late Minoan I date.