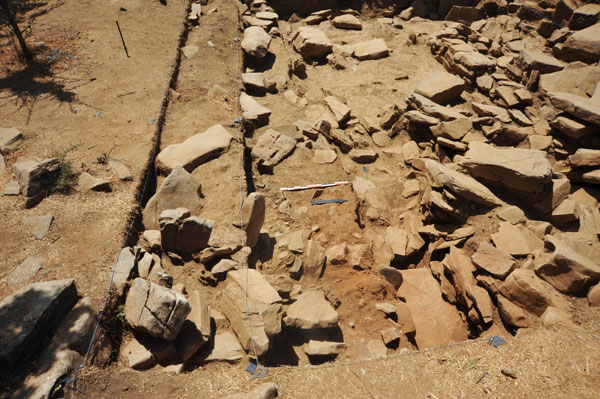 A partition wall that divided rooms 14 and 15 retained evidence of the earthquake that destroyed the site. It also prevented the excavation of the rooms’ floors. So we decided to carefully remove the fallen stones in order to continue the excavation. We took innumerable photographs of the wall and drew it in detail, stone by stone, so we could reconstruct it at a later stage. Inside the wall, we found a large quantity of carbonized wood, bones, and sherds, as well as four ceramic vessels, which may have fallen from an upper story.

We had started limited excavation of room 19 in 2008, during which time we uncovered a vast amount of stones with very few architectural features still in situ. Among the finds were two stone beads, a quartz crystal, and a bronze cordiform bead (see Field Notes 2008 and Special Finds).

Excavated part of area 2 (view from the east)

The 2007 geomagnetic prospection indicated there was a wall to the south of the excavated zone. So we continued to dig in that area, in order to reveal any remaining architectural elements and complete the plan of the Central Building. We uncovered a wall and discovered that a staircase may have existed on the eastern side of the room. At the southeast part of the trench, we found an accumulation of small burnt stones and charcoal in a semicircular arrangement, which may have belonged to a hearth. Above it, we unearthed pieces of clay and carbonized wood, which probably came from the destruction of a mud-brick construction. In this structure, we found 10 complete vessels, a great amount of sherds, and animal bones.

We excavated this area to find the stone structures identified by the geomagnetic prospection undertaken two years ago, so we could get a better understanding of the southern part of the Central Building and create a revised ground plan. This week, we opened two trenches and uncovered a new wall. However, we did not expect to find the wall there, which means that the geomagnetic prospection did not entirely conform to the finds.