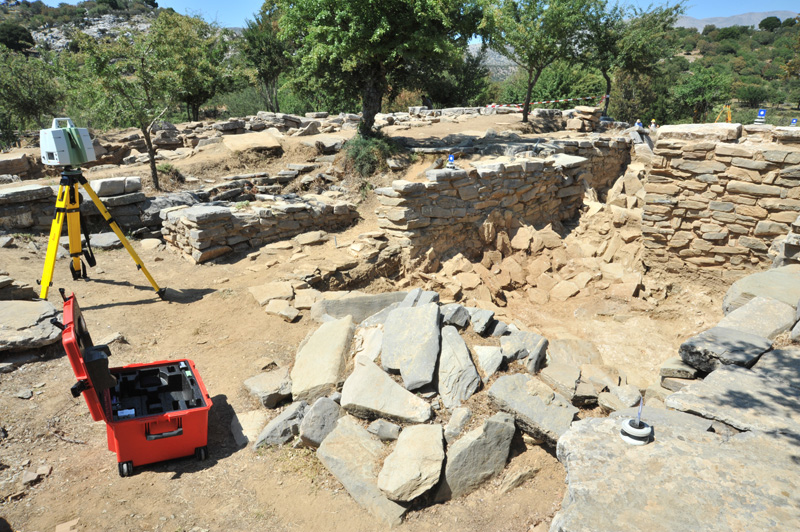 Area 1, which is the corridor that connects Rooms 13, 14 and 15,  is under excavation this season with the scope to reach the floor level as is the case with the adjacent rooms. The Area has been divided in two parts. Part A is at a higher level than Part B and is excavated first. There are only a few finds, mainly consisting of carbonized wood, animal bones and several pottery fragments. Large stones seem to have fallen from higher levels, probably the upper-stories of the adjacent rooms (fig.1). After a few days, we finally reached the same level, and we decided to unify Part A with Part B. The excavation goes on as one trench. Several conical and spherical cups were unearthed (fig. 2-3), as well as two miniature conical cups. It is also interesting that accumulations of lepidha earth (hard-packed gray clay) were found in various parts of the trench, indicating that it fell from the floor of an upper story. A special find is a stone object of irregular shape, probably used as a weight (fig. 4).
[slideshow id=56]

Area 2 consists of Rooms 19 and 28 in the so-called “looting pit” at the northwest part of the Central Building (fig. 1). This Area was also excavated in 2008 and 2009 seasons. The aim of the excavation in this Area is to reveal any architectural features and complete the plan of the building. The research so far, only revealed a small wall at the west part of the Area. The work in this Area reveals the upper part of another wall. Among the various finds there were a bronze pendant (fig. 2), a bronze pin (fig. 3), a bead made of agate, some pieces of rock crystal, as well as a stone grinder (fig. 4).  The work continues by removing several stone heaps in order to excavate the lower levels. This reveals the upper part of a strong and meticulously made wall (fig. 5). As the excavation moves on deeper, a small stone whorl is also revealed.
[slideshow id=57]

Area 3 (Area 1 in the last season) has already revealed, apart from the external walls, four internal walls that divide Area 3 in four smaller areas. It is characteristic that there are remains of the Roman period. This year the excavation started in areas III and IV with the aim to go to a deeper level. After the removal of three layers, lots of large fallen stones have been found. Part of the destruction layers is a destructed floor on which the north and the south walls abut. In contrast, the east wall β of Area III continues deeper, as well as the south end of the west wall γ, where is the entrance of the two areas. Among the finds there are small animal bones, sporadic accumulations of carbonised wood and clay earth, as well as some coarse pottery. Lastly, we started the excavation at the adjacent Area 30 with the aim to investigate the external part at the east side of areas I-IV.
[slideshow id=58]

The excavation in Area 4 is conducted in two different Rooms, 7 and 8. Room 7 is the “room of plaster” and the main goal is its preservation (fig. 1). This distinguishes Area 4 from the others, as it has three conservators participating in the excavation (fig. 2). The excavation starts by digging at the southern part of the room the earth between the plaster (which was removed in 2007) and the underlying layer of schist and limestone slabs originally belonging to the upper floor. At the northern part more plaster is unearthed. Τhe careful removal of dirt is essential for the preservation of the surfaces and colors found on some pieces of plaster (fig.3). Apart from the plaster, there are small pieces of charcoal, some pottery sherds and very few pieces of animal bones. An interesting case is that of three conical cups found either immediately on the plaster or under the stones. The plaster bears red, very vivid in some cases, blue, and probably black colors.
In Room 8 (fig. 4), the eastern one of the two rooms of the north façade with windows, a semi-circular construction was found in 2007. The excavation continues in depth in and around of this construction. The finds are a few sherds, very few pieces of animal bones, a few pieces of charcoal and some pieces of plaster, some of them with red color. The pieces of plaster preserving their surfaces and colors are immediately care with the use of fixative fluid, either being collected or remaining in situ.
[slideshow id=59]

In parallel with the excavation at the Zominthos’ Central Building, we are using new technologies for accurately capturing as much of the evidence as possible. We are employing 3D capturing methodologies, and especially laser scanner, to capture the features of both Areas 19/28 and Rooms 8 and 9. In that way we will be able not only to produce three-dimensional models of the excavated features, but also to accurately measure and reconstruct the various details.