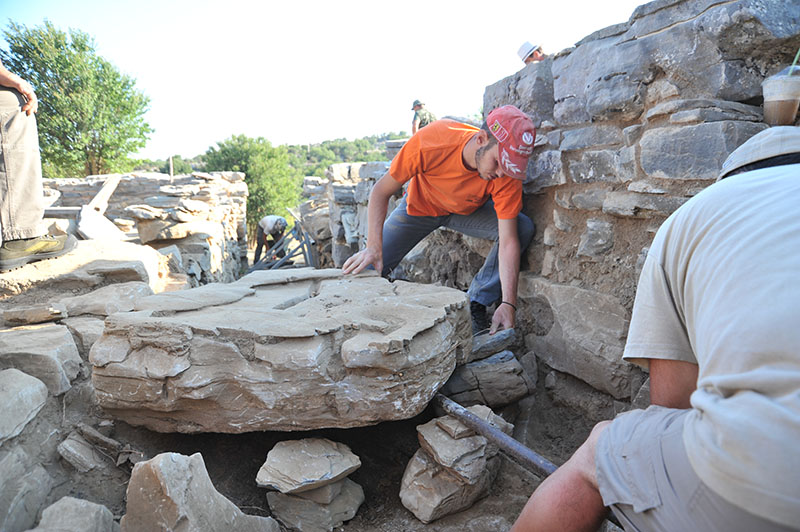 The doorway that divides Rooms 7 and 8 was cleared from the rubble (fig.1). A layer of sand that was found at this spot might be a hint of a deliberate action. We continued the excavation by removing the slabs of the paved floor from the Southeast corner (fig.2), during which, a small cup was uncovered (fig.3).

We unearthed and removed many pieces of plaster, which are either white or bear colours. Many of them are red (fig.4), while one of them had some kind of depiction of black colour on yellow (fig.5). We also started clearing the plasters lying along the South wall (fig.6).

In the second week we have reached about 1m. in depth from the surface of the trench, completely exposing the west wall of the Room revealed (fig. 1). In total we have removed five layers and a great number of fallen stones most probably originating from the walls of the upper storey of the Room. Among those limestone slabs, there was a great number of schist slabs which might belong to a destructed floor or the roof of the upper storey. The pithos that is gradually revealed seems to have fallen as well from the upper levels of the building (fig. 2). It is worth mentioning, the pieces of plaster unearthed is gradually increasing, especially at the southeast part of the Room and the along the east wall. It is very important to note that among those pieces, there are several which preserve colours–red or black–as well as impressions of strings (fig. 3). We also had several ceramic finds; 3 handless conical cups from the central and east part of the trench, as well as a miniature handless conical cup from the west part (fig. 4).

In the second week of excavation in the west-southwest part of Area 28, we cleaned the west limit of Area 28 and its boundary with Area 27 (fig. 1). At the east part of Walls E, Z, and Z’ which were cleaned last week, we revealed a large number of limestone slabs and schist slabs, as well as part of a burnt wood, which most probably indicate a fallen floor, and consequently an upper storey in Area 28. In this part we could identify two areas, in which we unearthed several handless cups, part of another vessel, many animal bones as well as a grinder. The removal of layers will continue until we will reveal the floor of the area as well as the foundation of the wall.

At the northwest side of Area 28 (southeast part of Room 17), we clearly saw that the stone mound does not belong a blocked part of an entrance to Room 17, but a continuation to the south, of the west wall of the room (fig. 2). The building technique employed for this part is rougher than the rest, presenting evidence of destruction.

Lastly, at the east, southeast part of Area 28 (fig. 3), we started the removal of layers in continuation of last year’s excavation, with the purpose a) to reveal the floor, which has been already unearthed at the central part of the Area, b) to clear the two openings which can be noticed at the southeast corner (one of the two leads to Area 26), and c) the boundaries of the north wall Γ. During the removal of two layers, which had several fallen limestone and schist slabs, as well as traces of schist dirt as well as several small pieces of white plaster (some of which bear red and blue dye), we found an accumulation of fallen conical cups. It is worth mentioning that in contact with the west side of the east wall of Room 28 and the east opening, in between the fallen cups and under big limestone slabs (fig. 4), we found a male adorant figurine made of bronze, bearing rich hair locks and a dress (fig. 5).

The second week of excavation at Corridor 10 continued with the removal of more layers of soil as well as a large number of stones fallen from the walls of the corridor and neighbouring buildings (fig. 1). Especially, there was a huge monolithic limestone slab at the north part of the trench, which was particularly difficult to be removed. To do that we made a stone platform to raise the slab at the level of the wall and then (fig. 2-3), position it on the wall from which it seems that originates. We also continued the mounting works at the west wall of the north part of the corridor (fig. 4). As well, we decided to extent the trench to the south by about 2 meters, in order to explore its relationship with the south wall of Room 50 and explore the possibility to have a corridor ending at that point or extending to the south of Zominthos’ Central Building.

In terms of finds, we revealed several vessels dated in the Late Minoan period, such as a juglet (fig. 5) and several conical cups. Contrarily to last week’s finds, when the picture we had about the chronologies of the finds was fairly mixed, it seems that this week we reached the undisturbed Minoan layers. One of the most important aspects of this week’s excavation is the revelation of a large quantity of carbonised wood, one of which was cylindrical in section (fig. 6), probably indicating along with some schist slabs and clumps of clay, a fallen wooden floor or another wooden structural element.

This week we also started the investigation in a new area. Area 26 is located at the west side of corridor 10 and is joined with it by an opening at the southeastern corner of the area. It also communicates with Room 20 and Corridor 16.

During the week, we cleaned the area (figs. 1, 2), by removing large amounts of soil brought there in the last few years (in order to create a flat surface for the circulation between the excavation districts). Near the northwestern corner of the area, we revealed reddish soil which may continue further (fig. 3). All over the area, huge fallen stones have begun to be revealed. The ones that were on the unexcavated surface have already been removed. Under one of these, we found a skeleton of a (probably modern) young lamb (fig. 4). The shepherds of Psiloritis usually bury lambs in this way, when they die.