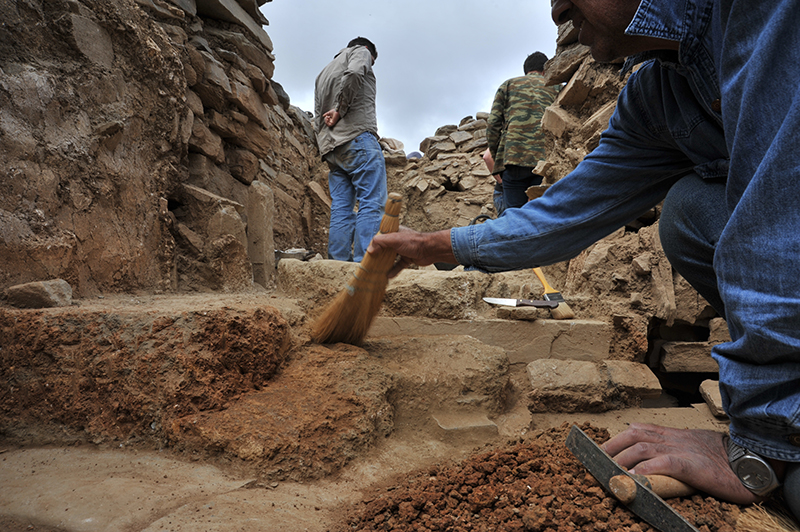 The excavation here reached the ground floor (fig. 1), while also revealing the door opening (fig. 2) to Room 8. Both have very large limestone slabs, which indicate a large construction operation based on a significant architectural planning. (fig. 3).

A large scale operation to reveal, conserve and remove the plaster surfaces, which are most usually colored, was conducted. At the northwestern corner the shell of petrified salts was opened, thus allowing us to collect the pieces of plaster inside. These proved to be of the most significant regarding the variety of colors and their preservation state (fig. 1). At the same time the excavation of the last stratum continued revealing a ground floor of limestone slabs, proportional to that of Room 7. Noteworthy is a small conical plaster fragment belonging to an offering table and most probably belonging together with another one that was found last week.

During the fourth week of work in Room 9 we completed the removal of Layer 9 and then of the proceeding Layer 10 in most part of the room apart from its SE corner. The excavation of Layer 10 brought to light two more interesting architectural elements connected with the possible stone bench that is being revealed along the opening of the SW doorway (fig. 1). The first one is another possibly rectangular stone structure that is beginning to appear in the central part of the room, just to the east of the northern part of the bench (fig. 1). This structure is very badly preserved and it cannot yet be defined more precisely. The second one is a pair of steps that are coming to light along the southern part of the bench (fig. 1). Six more conical cups came to light along the eastern, northern and western walls of the room. As already observed during the last week, the quantity of fallen fragments of wall plaster is radically reduced in the whole area of the room apart from its southern part, and especially its SE corner. Among the plaster fragments that are still being collected in this area are again very interesting decorated examples, such as pieces bearing black bands on an orange background (fig. 2, 3) or alternating bands of different color (fig. 4) on their surface.

A large volume of stones and dirt is removed from this room. At the western part the excavation reaches the depth of the threshold, which is fully revealed (fig. 1).

The hypothesis of a structure inside this room, which could be a staircase, is more probable now. Some stone slabs are in a stepwise sequence (fig. 1) indicating that. Further investigation will be needed.

During the 4th week we completed the removal of the fallen stones from the eastern part of the Room 19 and we revealed the paved floor which primarily consists of schist slabs (fig.1). At the northeastern corner of the room we unearthed an area of red soil, which might belong to the floor of the upper story. Similar areas of red earth were also revealed in other areas of Room 19. The huge monolithic slab which comes from a staircase will remain at this position. Room 19 is a very important space, a light well, which also had a staircase that was leading to the upper floor. At the southern part, a bench has also been revealed. The work also continued at the southwestern part of the Room (fig.2) in which a paved floor made of schist slabs was also revealed. The burnt soil is a strong indication about the level of destruction because of the earthquake and the resultant fire.

Finally, the walls of Room 19 rest on the paved floor.

We also came across a very interesting find in Room 28 (fig.2), where we continued digging for a second week: a new wall with a width of about 70cm, which has been unearthed below the paved floor and most probably belongs to an earlier phase (fig.3). In this case as well, there are large quantities of burnt wood and ash.

Among the various finds, there is a clay disc, conical cups (fig.4), juglets (fig.5), miniature cups, sherds of pithoi jars and braziers as well as many animal bones, some of which seem burnt.

The fourth week of excavation was full of surprises especially for Room 53. The excavation continued in Room 26, where we revealed the threshold of Rooms 28/26, while we started revealing the paved floor of the Room (fig.1). It is characteristic that the floor slabs are located at different levels because of the subsidence of the ground and the earthquake activity that destroyed the building in the Late Minoan period. In Room 26, there are no any special finds, apart from many conical cups unearthed across the east side of the bench (fig.1), as well as some more dispersed along the other walls of the Room.

The excavation in Room 53, revealed some of the most important finds unearthed so far at Zominthos. These finds were a group of objects made of bronze, which provide a strong indication about the importance of Zominthos Building for the whole area as well as its relationship with the Idaean Cave. To be more specific, at the northeastern corner of the Room, 6 metal objects were unearthed: 2 votive double axes (fig.2, 3) as well as a miniature double axe, a votive knife and a chizel (fig.4). Close to this area, a brazier which has a diameter of 32 cm. and a handle of 30cm. was also revealed (fig.5). Along with these finds, two juglets, a fruit stand (fig.6) and 8 grinders (fig.7) were unearthed. Lastly, a double horn of a wild goat was also revealed, which is an equally important find considering that this year we have revealed two more in Room 26, while another one probably comes to light next to the last one. Lastly, it is worth mentioning that a group of several vessels, among which two bronze braziers, and a shallow cup were revealed next to the area where the metal objects were found (fig.8).

In Rooms 41 and 42, we continued the excavation by removing the upper layers of the debris. They all belong to one relatively thick stratum, which contains many stones (especially in Room 41) and only a small amount of pottery. Small traces of white plaster have been noticed on the walls of both the rooms.

In Room 41, remarkable are some large stones fallen towards the same direction, which in fact are a fallen part of one of the walls (fig.1). Among the sherds found in this room, one bears an interesting plastic decoration (fig.2).

Room 43 started to be excavated last week after some test trenches in 2010, which aimed to reveal the boundaries of this area (fig.1,2). This is a rather difficult room to be excavated since it is located on a slope, as well as is extremely disturbed because of the looting activity in 1960s. Our aim is to gradually reveal the walls of the room and get some information about its use and date by studying the various finds unearthed from the mixed soils. (fig.1,2).

During the fourth week of the 2013 season we continued the investigation of the area to the north of the north facade of the central building.  At the western part of the area, to the north of Rooms 11 and 12 the excavation continued, giving many pottery sherds, a few bone fragments and over 60 conical cups of various sizes (fig. 1) in Layer 3. At the same area the upper parts of three walls were revealed, indicating the existence of two rooms (fig. 2). At the same time the excavation of Layer 3 in the central and eastern part of the area revealed more parts of a pavement, in a lower level than the one found the previous weeks (fig. 3). Layer 3 gave many pottery sherds, a few bones and charcoal.