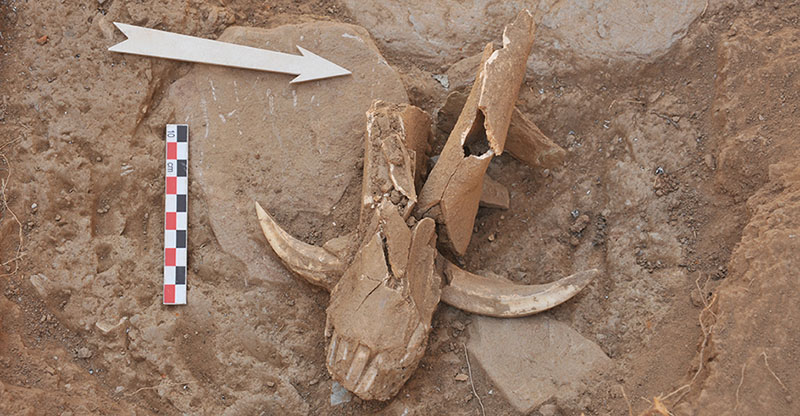 The western part of Room 24 was excavated, between Wall I (to the West) and Wall ΙΙ (to the East). A layer of broken schist slabs and coarse stones was found and removed. The revealed floor is paved with trapezoid and irregularly-shaped slabs of large size. Part of a bench covered with plaster was also located in the northwest corner of the room. The bench continues to the East under Wall ΙΙ (fig.1). During the excavation of the above layer, fine and course pottery was collected, as well as a small quantity of animal bones.

Between Wall II (to the West) and Wall III (to the East) the paved floor was also revealed. A bench was located in contact with the northern wall. It extends towards the East and continues under Wall III. This bench was covered with plaster (fig.2). Some fine and coarseware pottery was collected here, too, and also a few animal bones.

Between Wall ΙΙΙ (to the West) trapezoid slabs of medium and large size were removed during last year’s excavation (fig.3). A slab of irregular shape that was blocking the entrance to Room 3 (lustral basin) (fig.4) was also removed. Some fineware and coarseware pottery and a small quantity of animal bones were collected. Fragments from the jaw of a wild boar were also found (fig.5).

Room 27 is located in the west wing of the Central Building. Its investigation started last year. The excavation had reached the floor but was not completed. During this week the investigation of the main room and of the opening on the northern wall towards Room 17 (fig.1) was concluded. The floor was not paved and a threshold came to light inside the opening (fig.2). A few small ceramic pots where found, mainly conical cups, and an incense burner (fig.3). A small clay sphere, a whetstone and some bones were also collected.

It’s a rectangular area of 4×3.2 m. with unclear boundaries to its southern and eastern side because of a large scale destruction during the 1960s. To the West it is delimited by the eastern wall of Corridor 34 and to the North by the southern wall of Room 52. The south part is characterized by the multitud of various-sized fallen stones. Two layers were removed (fig.1). In the northeast corner a pile of intact and fragmented pots (fig.2) were found, mainly conical cups.

During the first week of the 2016 period at the Room 37 we continued the works of the last year. The excavation of one layer from the upper floor was completed (fig.1). It contained mostly lepidha-earth and fallen stones. In the north-east corner, the removal of a clay structure from the upper storey was also continued. A concentrated mass of burnt clay-earth was uncovered (fig.2). In the south-east corner a group of stones may belong to the southern wall (fig.3) of the room, which wasn’t found during the previous excavation period. The southern edge of the Eastern Wall was also revealed and the works extended to the opening between the Rooms 37 and 39. Several animal bones, small pieces of burnt wood, some small groups of ceramic pots two of which were found laying on schist slabs of the upper storey’s paved floor, some conical cups, two whetstones and a sealstone from steatite with an incised iconographic theme were collected (fig.4).

Room 38 is a large room of the west wing of the Central Building with dimension 7.5×6 m. Its excavation started this year (fig. 1). So far, the surface layer has been removed. A large number of various-sized stones were found spread all over the surface of the room. They obviously came from its walls (fig. 2). Among the fallen stones, only pottery sherds and bone fragments have as yet been found.

Room 47 is a large room in the Southern section of the Central Building. After its destruction in antiquity, it has been repeatedly disturbed by looters and other types of human interference in modern times (fig.1).

The investigation was concentrated in revealing the full extant of the room by uncovering its, mostly destroyed, enclosing walls (fig.1,2).

During this week the perimeter of the Room was revealed. Among the collected pottery a conical cup and a medium-sized ceramic pot were found (fig.3).

It is a square room that was extensively excavated in previous years. Is one of the most important and interesting rooms of the Building because of the two column bases and the stone altar that were found inside it. This year the investigation focuses on the southern part of the Room.

The fallen rocks to the North of the southern wall were cleared out, uncovering the wall in its full length (fig.1,2). The building structure of its eastern half is different than the western one. At the western part an opening towards Room 51 was unearthed (fig.3).

Apart from a few pieces of coal, a small raw piece of rock crystal and an intact conical cup (fig.4), not other finds were collected.

At Room 59, in the north-west section of the Central Building, west of Room 57 and south of the pottery kiln, this year’s investigation started with the removal of two layers.

During the excavation (fig.1) some fallen stones were cleared from the southern part of the room and row of stones were revealed belonging to the southern, western and eastern wall of the room. The northern wall has not yet been located. A lot of pottery was collected, mostly coarseware, among which: legs of cooking pots, parts of pithoids and also a miniscule handless cup and an intact miniscule jug (fig.2).

At Room 60, to the South of the Rooms 57 and 59 and to the North of Room 17, two layers were removed (fig.3). In the north-east corner an entrance came to light and many fallen rocks were removed. Pottery sherds from small and medium-sized vessels were collected, some intact conical cups, animal bones and small pieces of coal.